Rogaining combines adventure with navigation skills, fitness, a fearlessness of the dark and an ability not to get on each other’s nerves. Edith Leigh discovers why it is growing in popularity

Ever since he was a young boy he has loved looking at maps, but he never took his interest any further until he hit his mid-30s, when he discovered the sport of rogaining.

It was a sport that combined well his love of running and the outdoors. Within four years he found himself racing with a teammate around checkpoints in the Czech Republic as he vied for the world rogaining title.

But international competitions aside, rogaining is also a family activity for the Bixleys, including nine and eleven-year-old Samantha and Noel.

“I love it,” says Bixley. “It’s like going exploring. You get to go on private land a lot of the time and see all those cool places no one else gets to see.

“The kids love it. It’s a very cool thing do as a family. It’s a giant treasure hunt. My son refuses to stop and read the map.” He just wants to run to the next checkpoint.

These are sentiments that it seems many other people are discovering and rogaining, while still a bit of an underground sport, is also growing in popularity.

The last time Bixley organised a six-hour rogaine event in Dunedin he was taken by surprise when 80 people showed up, especially considering he hadn’t advertised it. 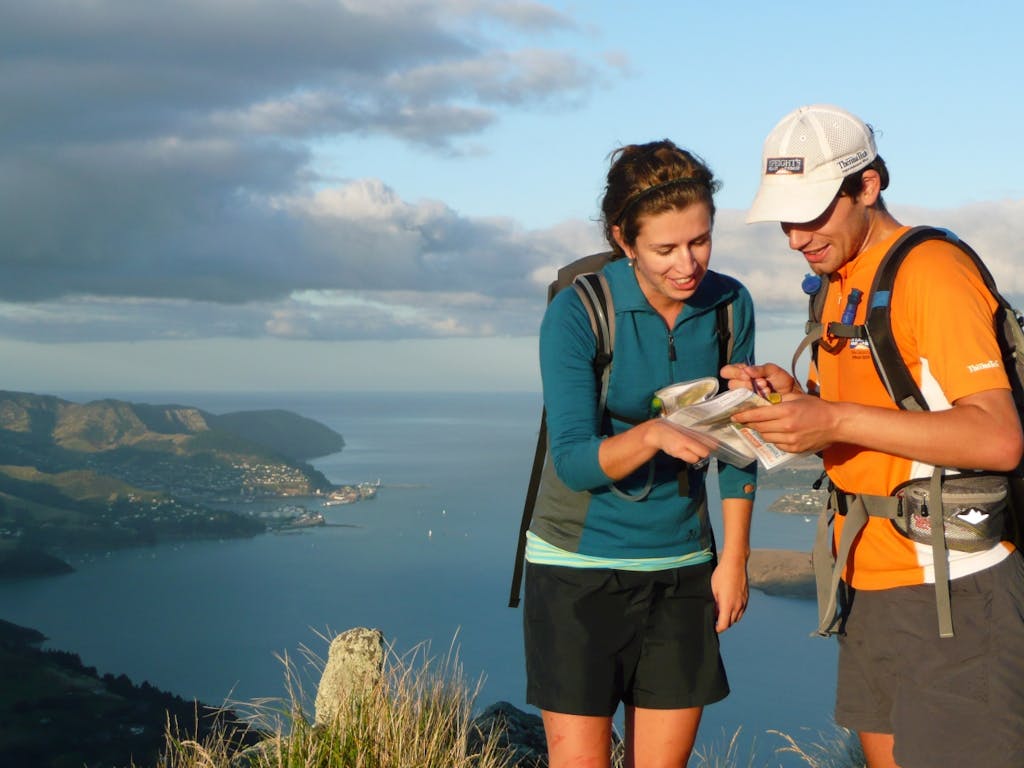 Ed Stevens, who has been organising rogaining events for the past seven years, says the sport is definitely gaining traction in New Zealand.

His first rogaining was in 2007 when he moved from Dunedin to Wanaka. He was expecting a fairly low key event with perhaps 20 or 30 people, but was gobsmacked when 70 turned out.

It was a moment that sparked an idea to organise more events around Wanaka’s stunning countryside and led to the formation of his own business Highland Events.

The company, co-owned by Terry Davis, usually organises two rogaines a year. Five years ago they were lucky if up to 150 people turned up to compete, but the last rogaine they organised attracted about 400 competitors.

Perhaps their most cunning move has been to introduce a three-hour family event which has proved hugely popular, Stevens says.

“At our last rogaine we had a hundred kids running about. It was absolutely fantastic. They can’t get enough of it. We make sure all the kids go home with a prize, and often the parents go from racing around supervising the kids to wanting to have a go at a six or 12-hour event themselves

Map reading skills, speed and fitness, and a mental toughness to keep going non-stop for 12 or even 24 hours, is what it takes to win a rogaine event, but for many people rogaining is more of a chance to get out and explore new territory and enjoy some team camaraderie.

At the start of a rogaine, teams are given a map on which checkpoints, each worth varying points, are marked. They then have a set amount of time – usually one to two hours – to study the map and work out what they think is the best route for their team to collect as many points as possible in the allocated time. Teams that go over the allowed time lose penalty points.

Rogaines can be anything from three to 24 hours long, with most events six or 12 hours long.

Stevens says it’s an interesting sport in that it is not just about pure fitness and “going hard out”, but navigational skills and an ability to think laterally are just as important. He has often seen slower teams that jog or walk around the course, outpoint faster teams running at full tilt, because they have more navigational nous. 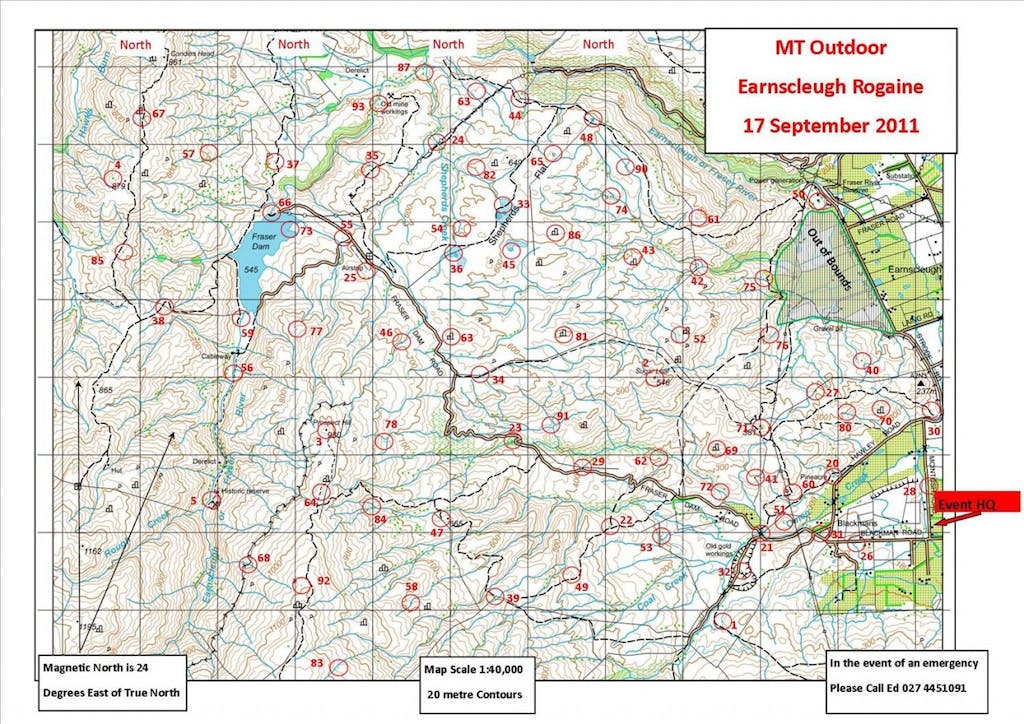 Another interesting aspect he has noticed is that more females than males compete at the events he organises.

“I put that down to the fact it’s not a race, but a competition.”

Tim Jowett, who has been rogaining for the past 14 years, describes the sport as “quite holistic”. There is the physical challenge of getting around the countryside to collect points, but it is also mentally stimulating, and he particularly enjoys the navigation aspect.

He has always liked tramping and did orienteering while studying at university. While rogaining does have similarities to orienteering, it is much more freestyle, he says.
“It’s a very flexible format, as opposed to conventional orienteering which is quite formal.

Instead of participants setting off at three-minute intervals on a set course to get from A to B to C to D, participants choose their own course and need to make strategic decisions based on their own skills and fitness. On a well-designed rogaine it will not be possible to get to every single checkpoint in the allocated time, so even a top-notch team will need to make strategic decisions.

The ability to use a compass becomes necessary for the highly competitive, or when darkness falls, but for basic events it is not necessary. If a person can orientate their map to the landscape then they can rogaine.

Navigating at night, however, adds a whole new challenge that you generally don’t get with tramping, says Jowett. “Being out at night is quite exciting and sometimes quite scary.”

At the other end of the scale, Bixley is highly competitive and out to win. He has that thin, wiry look of a long-distance mountain runner and while I chat to him in his office, he doesn’t exactly jiggle, but you get the impression he doesn’t like sitting still for long.

During a rogaine competition he and his teammate will “smash ourselves into the ground” and run as much as they can – all the flat and downhill terrain. They may run up to 140km in a 24-hour event, eat while on the run and certainly won’t stop to sleep.

“Being awake for 24 hours isn’t that difficult,” Bixley grins.

When Bixley and his teammate, Robert Jarvis, placed eighth overall at the 2012 World Rogaining Championships they lost the top spot by a mere 30 seconds per checkpoint.

Of course, the high tension of balancing speed against making sure you are still on track can lead to tempers flaring. “While running around the Czech Republic we had a shouting match at 10pm. It was great because we re-focused.”

Studying the map and working out your route beforehand is a little like trying to connect the dots, Bixley says. 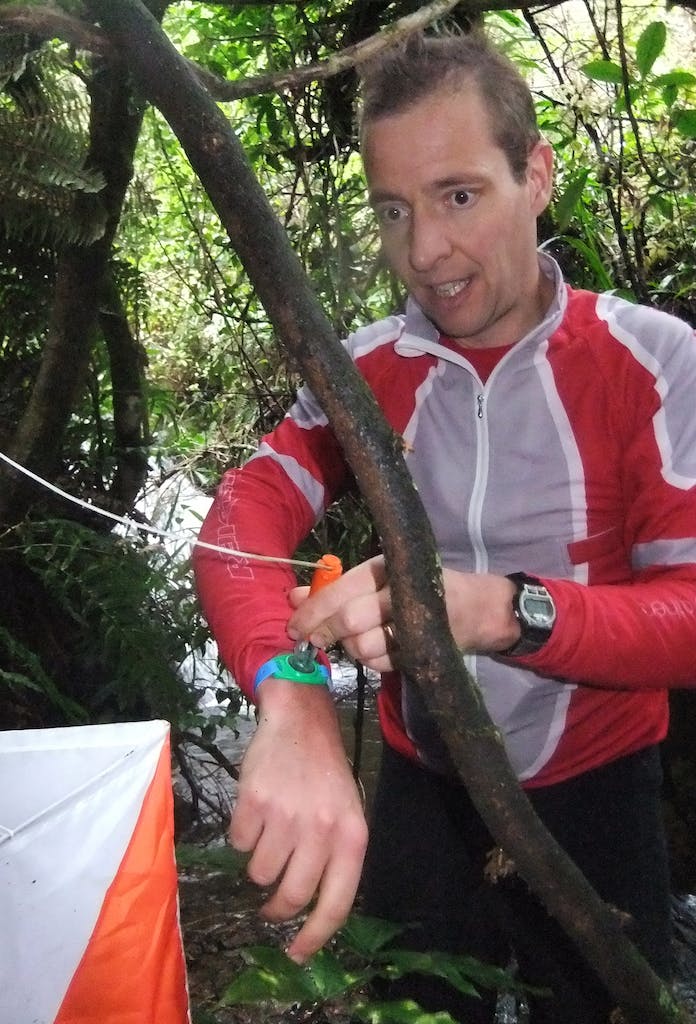 Electronic scoring during the Heights of Summer Rogaine

“You get different styles of map and you have to get into the head of the person who made the map.”

For Stevens, of Highland Events, while rogaining has been a passion for the past 20 years, he now enjoys the challenge of setting up courses more than competing. Planning a course is very strategic, he says, and he particularly likes doing the map and the technical side of it.

Every event is run in a new location so dealing with landowners is a big part of the job.

“I’m so grateful that we have really great support from landowners. In five years we have only ever been turned down once for use of a property.”

A key persuader for many landowners is that rogaining events often put money back into the community. At the end of an event, it is traditional to have a communal feast, and usually local organisations, such as schools, will do the catering, and can raise up to $4000 in some cases, Stevens says.

“I find quiet satisfaction when walking around new landscapes, always at my own pace, plotting checkpoint locations to challenge teams.”

Course designers often like to take people to interesting parts of the landscape, and checkpoints may be placed on hilltops, at waterfalls or intriguing geological features.

Many trampers move through the landscape fairly superficially, following the signposts, the track, the stream or the leading spur, Hunter says. Whereas at a rogaining event, people will “go all over the place”.

There is a richness in the landscape, which may not be immediately apparent, but which rogaining helps a person explore, he says.

Topographical maps become much more meaningful. When plotting their route, teams need to plan how to move around the landscape without climbing and dropping too much. On the course it’s a matter of always knowing where you are, checking the map and mentally ticking-off features you pass.

Initially an off-shoot of 24-hour endurance walks and orienteering events, rogaining was first developed in Australia in the 1970s. The name itself is an acronym of the three people who invented it, Rod, Gail and Neil Phillips.

Since then the sport has spread to New Zealand, Canada, parts of the US and is now growing in strength in eastern European countries, such as Russia and Ukraine.

In New Zealand, events can be organised by individuals, orienteering clubs or commercially. If rogaining sounds like you visit www.rogaine.org.nz to find out when the next event is being held in your area.