Hiking the Hollyford Track to the coast is a journey of discovery, writes Paul Rush

Rich birdsong fills the forest canopy, kereru whoosh overhead with a noisy flapping of wings and paradise ducks squawk their displeasure at our trespass on their territory. We are entering what is arguably New Zealand’s most scenic valley.

The rich green canopy allows a few slanting rays of sunlight to dapple the mosses and lichens on the forest floor. Nature’s delicate artistry is revealed everywhere; in unfurling gossamer-thin fern fronds and glistening water droplets on miniature orchid blooms. 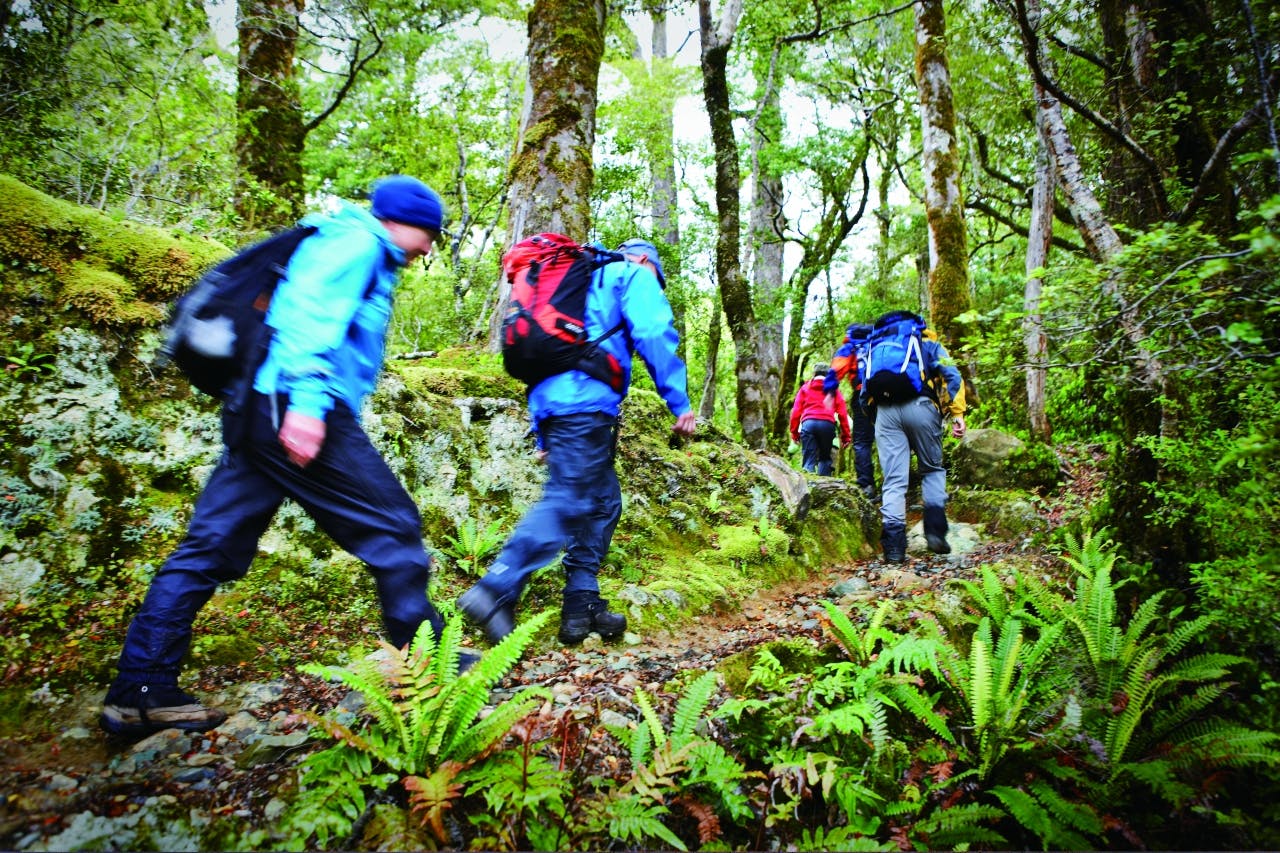 One of my fondest memories as a teenager was an overnight stay at Gunn’s Camp in this valley after the excitement of negotiating the newly-opened Homer Tunnel, with its loose gravel and deluges of seepage water.

The real highlight was my evening stroll down the valley with the constant trill of birdsong filling the air. Complementing the wood pigeons and paradise ducks were seven red deer eyeing me cautiously from the track margins. I felt like a teenage St Francis of Assisi; at one with nature and a fledgling member of the animal kingdom.

Today there’s a sublime peace in the forest, with the merest whisper of a breeze and the gentle tinkling of tiny streams hurrying to join the Hollyford River. The scene is dominated by water; in still pools among the trees, mini-cascades tumbling over boulders and silent streams tripping lightly over jumbles of stones.

Just when we get used to gazing at the monumental beauty of the Darran Range, the great granite mountain disappears. Right on cue, the dependable Hollyford rain begins to fall in earnest. At least we won’t need to dance the ‘Fiordland Foxtrot’ to deter the sandflies. 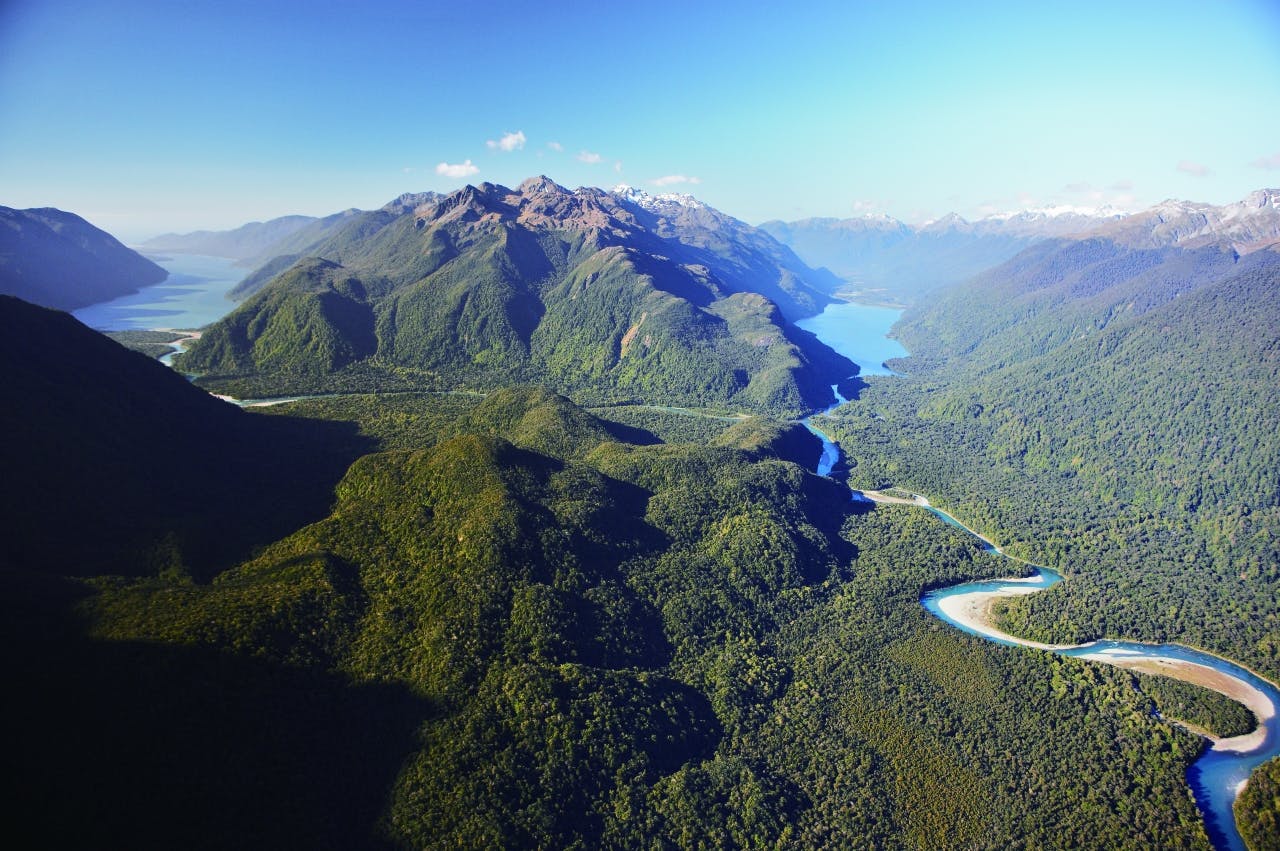 Our guide explains the vital role of broadleaf trees in forest regeneration; identifies some of the 108 mosses endemic to New Zealand and points out a green-hooded orchid that traps insects like a venus fly-trap to ensure they gather pollen. He gives us a bush-tucker sampling of fresh supplejack shoots (the taste suggests broad beans).

We learn to recognise red, silver and mountain beech trees and to distinguish between soft and hard tree ferns, sampling the nuts on the underside of the hard koru (the taste of walnut).

He reassures us he’s not planning a botany exam but then points out a fuchsia tree that sheds its bark to rid itself of epiphytes. “This is called the Silent Dog Tree,” he says in a serious tone. “Do you know why?” We glance anxiously at each other at hearing this curious name until someone cottons on: “Oh, the tree has no bark!”

With 9km of track behind us, we pass Sunshine Hut and hear the ear-splitting roar of a great cataract. Hidden Falls is a tumultuous cascade of water plunging over a great rock wedged in a cleft, generating a cloud of mist and spray. From here on the leaf-litter track becomes soft and mushy as we climb Little Homer Saddle through tall beech forest.

There’s a cheery greeting as we enter Pyke Lodge; a refreshing drink, hot shower and a private bedroom. Tea and coffee is brewing, the fire is blazing, the drying room is ready and a three course meal is being prepared. A torchlight walk to feed voracious eels and view clusters of glow-worms forms the evening’s entertainment.

A short walk to Lake Alabaster stimulates the senses as dawn breaks on day two. It’s a glassy expanse of ivory water with eerie dark shadows and mystical reflections. Captain Alabaster and Skipper Duncan were two early gold prospectors to visit this area. The local chief, Tutoko, greeted them wearing a full American Civil War uniform, which he had acquired from traders. 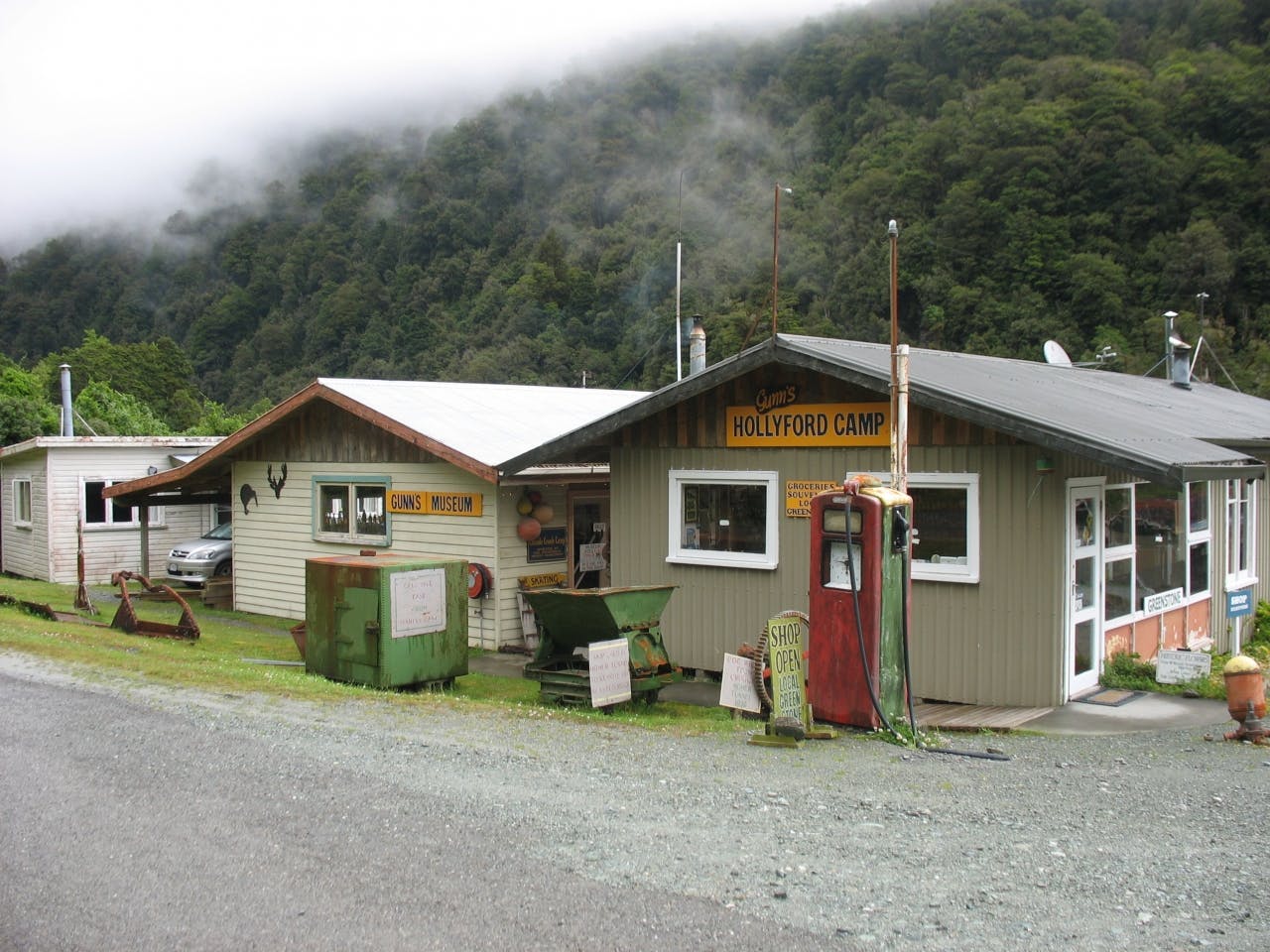 Explorers made their mark on the Hollyford; Patrick Caples named it after his birthplace in Ireland. Others obeyed the imperious call to seek out new lands; Dr James Hector, George Gunn, David McKellar, James McKerrow and William Homer. On the strength of Hector’s report to the Otago Council, a settlement was established at Jamestown on Lake McKerrow, but the isolation doomed it to failure.

A thrilling jet boat ride down the lake brings us to the site. There’s no trace of the town’s original general store, five houses and pub. It’s a poignant moment as we stand in contemplation of the privation the pioneer families faced, awaiting the promised road and often seeing the three-monthly supply ships turn away from the treacherous Hollyford Bar.

Our guide tells us a major fault line bisects Lake McKerrow. “The Pacific tectonic plate meets the Indo-Australian plate directly under the boat now,” he says. “So we could see kangaroos today.”

The Hollyford should be a fiord like the other 14 ‘sounds’ in Fiordland, but massive slips blocked the entrance, leaving a river valley instead of open water.

Our journey continues through ancient podocarp forest, and we linger under a 1000-year-old rimu tree. The fresh white flowers of the kamahi are blooming, in fine contrast to the crimson southern rata and the emerald mosses and velvet lichens of the under storey. We break out into a grassy clearing and receive a warm welcome from the hut wardens at Martins Bay Lodge.

A wildlife and heritage experience awaits us on our final day, beginning with a visit to the fur seal colony at Long Reef. By Jerusalem Creek we stand under a spreading sycamore tree above a hand-made slipway and hear the distressing story of the Martins Bay postmaster. 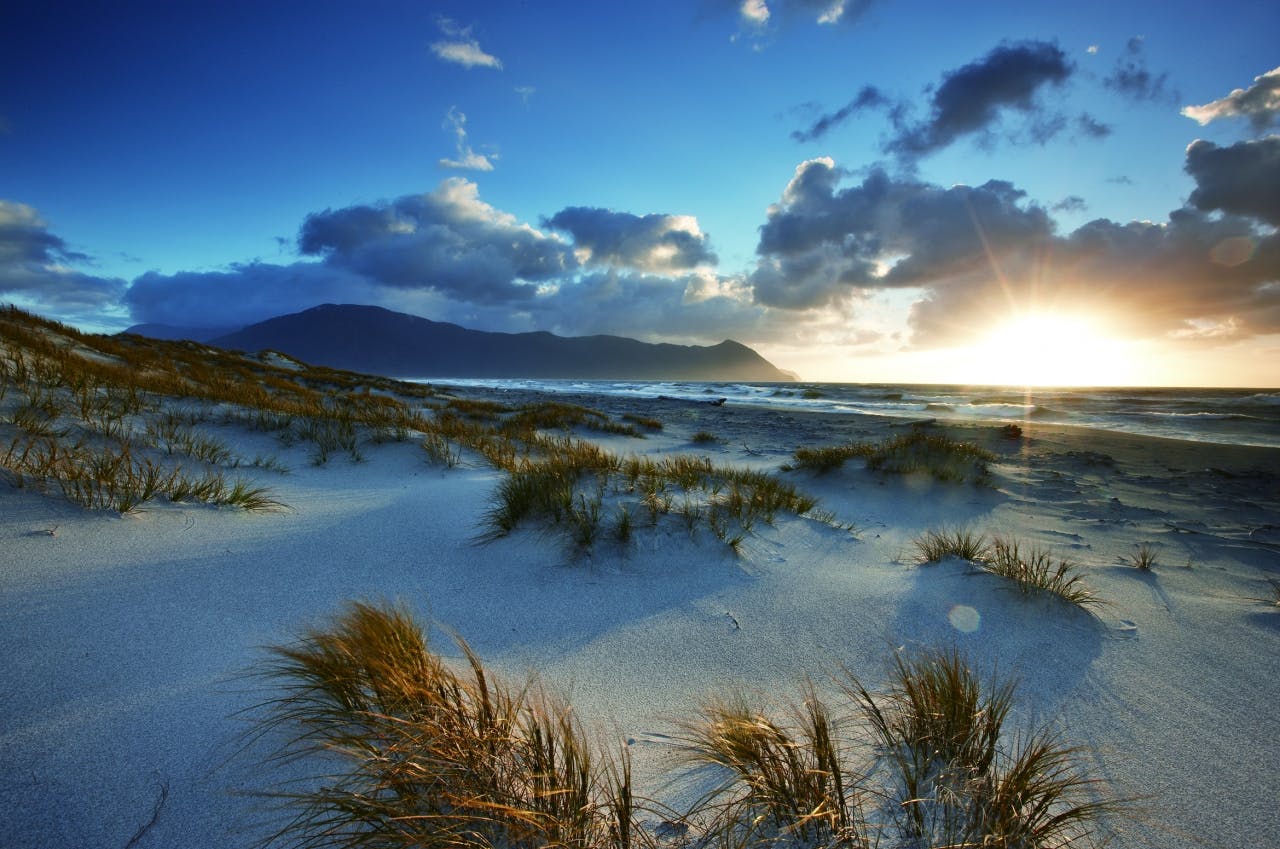 The sun sets on Martins Bay and the end of Hollyford Track. PHOTO: Paul Rush

Big John Robertson launched his dingy, rowed up Lake McKerrow and carried his mail bag over the untracked route to Queenstown every two weeks. He repeated this arduous journey without respite for two years until the day he fell dead on his lounge floor.

His widow and four children were unable to move his body. Neighbour Daniel McKenzie carried sawn timber from Big Bay to build a coffin. He had to sleep inside the coffin in torrential rain as there was no room in the house. He buried John the next morning and planted the sycamore tree to mark the grave.

At the southern end of the beach we stand among the remnants of Daniel McKenzie’s homestead. His family continued farming for many years after Jamestown was abandoned, driving their herds 250km to the Mossburn sales twice a year.

The legendary Davey Gunn took over the run hold in 1926 and introduced tourism to the valley. One day a light plane crashed in the sea at Big Bay, killing one person and injuring four others.

In a gallant mercy dash, Gunn ran to Lake McKerrow, rowed up the lake in the dark and ran to Marion Camp to summon help – a 90km non-stop journey on a rough blazed route in 20 hours. Two of the injured would not have survived another day without medical attention. 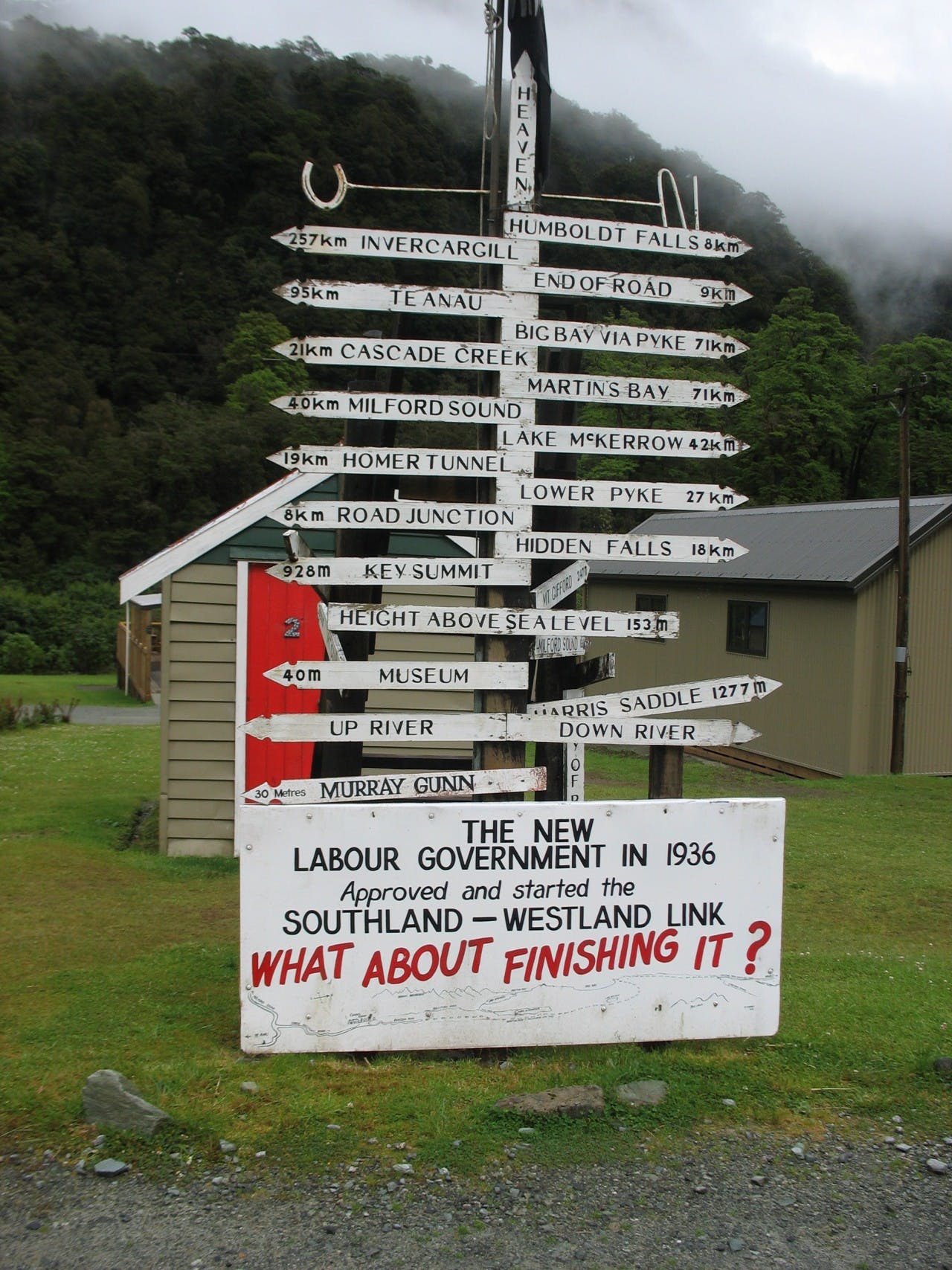 Interestingly, this intrepid cattleman and pioneer trekking operator, whom our guide dubs, “the greatest man who ever lived”, earned such a reputation as New Zealand’s own Davey Crockett, that 80 per cent of his clients were women.

An entry in the Pyke River Lodge visitor’s book reads, ‘I would have married Davey Gunn’. Sadly, this man who was ‘made of whipcord and horseshoe nails’ drowned when his horse stumbled on a river crossing and his body was never found.

A small aircraft is parked beside Martins Bay Lodge and we board with mixed emotions. I’m thrilled at the chance of flying above Milford Sound, but reluctant to leave the Hollyford Valley with its monumental beauty, heroic, heart-rending pioneer stories, remoteness and pristine forests.

The Hollyford is much more than a walk – it’s an extraordinary journey that satisfies the soul.