The Ruakituri Wilderness is an integral part of Te Urewera, the former national park and the homeland of Tūhoe which was declared a legal entity in and of itself in the Te Urewera Act 2014.

The Ruakituri Wilderness, while no longer gazetted as a Wilderness Area under the National Parks Act, is to be managed as one. Its protection is only stronger for being provided for under an Act with such noble purposes as ensuring Te Urewera is a ‘place for public use and enjoyment, for recreation, learning, and spiritual reflection, and as an inspiration for all’.

The Ruakituri Wilderness is unique for its relatively moderate, but immensely confusing, topography under continuous beech forest cover. The majority of the wilderness is a wide basin which funnels into the lower Ruakituri Valley through the chasm of the magnificent Waitangi Falls, however, the general pattern is confounded by a maze of tributaries that loop back on themselves, skirt isolated hillocks and sometimes just disappear under the soft sedimentary rock. The Ruakituri is a bush-navigator’s challenge or nightmare.

The area was first explored by Māori who searched for food supplies and traversed between settlements. During European settlement, the infamous Te Kooti passed this way during his skirmishes with the armed constabulary and their Māori allies. Later, the National Park Board and Forest Service made inroads to the edge of the wilderness with hut and track networks, and the occasional party of trampers or hunters stepped off-track and traversed from one known point to another. They have left much exploring still to do though, and few footsteps in which to follow. 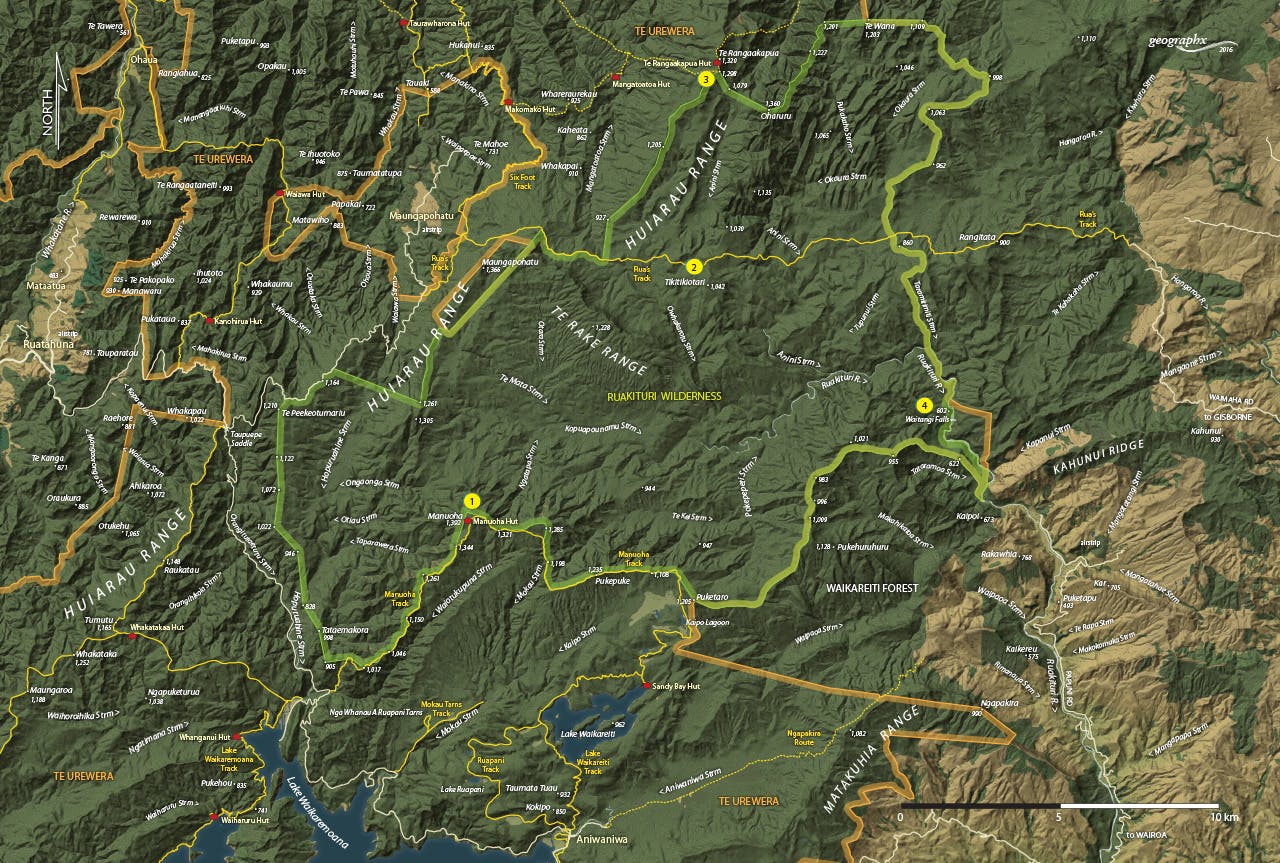 Step west, off the access track to Manuoha, the highest point in Te Urewera, and you are in wilderness. If not prepared, step straight back. Manuoha stretches beyond the bushline and looks down over lakes Waikareiti and Waikaremoana to the central North Island mountains. Manuoha Hut near the summit sleeps six and is a springboard to a descent down the Ruakituri.

Huts and tracks are generally prohibited in wilderness areas but an exception has been made for Rua’s Track which predates the modern concept of wilderness. Seldom walked because of its remote and difficult access points, Rua’s Track is a destination in itself for wilderness travellers.

Approaching the Ruakituri Wilderness from the north, from either the Waioeka or Waimana catchments, is an adventure in itself. Perhaps the easiest proposition is from Moanui Road on the Koranga River. Find your way up the Makakoere River to Te Rangaakapua Hut which sits on the edge of the wilderness area at a lofty 1320m and is renowned for its views. It might be possible to follow Anini Stream down to Rua’s Track – who knows!

There is arguably no more spectacular waterfall in New Zealand than the 72m Waitangi Falls which cascade abruptly from the basin of the upper Ruakituri River into a windy rocky gorge below – which is itself a fun adventure. If you can find your way to the end of Papuni Road, an Eldorado for fisherman and kayakers, you will quite possibly be able to follow your nose up to the falls.

Now use your imagination! East-west, north-south, source to falls. Take your map, compass and patience. Don’t take any friends you are reluctant to lose. As Edward Abbey said, without wilderness, our society is a cage. The Ruakituri Wilderness is a chance to travel outside our society, to learn and be inspired. Make it happen.