Though much of the range is rough bush country, there are several tracks which climb to its modest summits. A number of especially interesting sites can be found on its flanks or nearby.

South and east of the ranges lies the massive catchment of the Aorere Valley which rises in the hinterland of Kahurangi, while to the north and west are remarkable beaches and tidal platforms abutting the Tasman Sea and the wild, remote trip to Kahurangi Point. 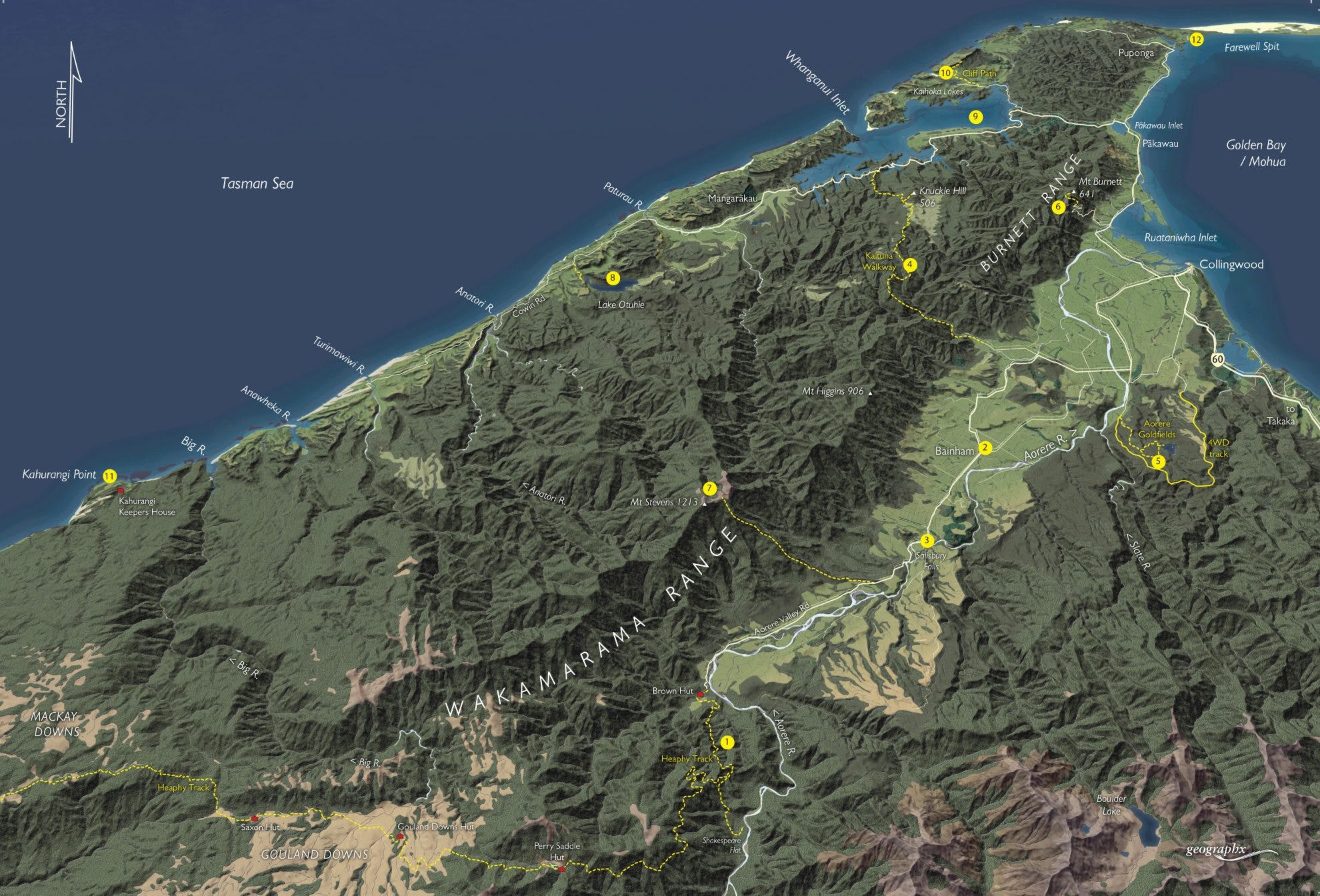 The Heaphy Track begins at the southern edge of the Wakamarama Range and heads over Perry Saddle to Gouland Downs and the Heaphy River before arriving at the coast. Day trips can be made onto the track as well as to places like the beautiful Shakespeare Flat.

The historic Bainham Store is a must-see for anyone travelling through the Aorere Valley. The array of knickknacks, memorabilia, and novelty items in this rustic cottage, surrounded by open pasture, will fascinate.

A very deep rock-walled gorge in the Aorere Valley, accessible on a short walking track. In low to moderate flows, it makes a stunning swimming hole. This was also the site of the historic swingbridge which, for more than 120 years, spanned the river until it was destroyed in a flood in 2010. Parts of the The Hobbit trilogy were filmed at the rock platform, just east of the falls.

A popular walkway which traverses the Burnett Range between the lower Aorere River and Whanganui Inlet, bypassing Knuckle Hill – a spectacular viewpoint encompassing much of the northern section of Kahurangi National Park.

The sprawling Aorere Goldfields contain a network of tracks and workings which can be explored in a day. The trails can sometimes be linked by tunnels and cuttings, and there is also two large caverns to explore, one of which, the Ballroom Cave, was said to have been used by the miners as a dance floor.

Referred to by locals as ‘Elephant Mountain’, as it has a distinct elephantine-shape when viewed from the south-east near Collingwood. This 641m bluffy hilltop has an outstanding view of the outer Golden Bay region, including Farewell Spit. A private mining road extends well up the lower forested slopes and permission to walk or drive this is normally possible by approaching the Sollys mining office.

The highest point on the combined ranges, the tussock summit of Mt Stevens (1213m) can be reached via a steep track from Aorere Valley Road. The track might be a little overgrown in places, but it is worth persevering to reach the summit and visit Mt Stevens’ sub-summits for the excellent views over the unusual landscape of the upper South Island.

8. Lake Otuhie
A large lake with a short, attractive access track. The lake is isolated amid limestone bluffs with nikau palms that appear regularly in this remarkable section of the range.

9. Whanganui Inlet
This large inlet covers much of the tidal basin immediately north and west of the Burnett Range. Wairoa, Muddy, and Banjo creeks can all be paddled at high-to-mid tide. If venturing into the main inlet, take extreme care as there are powerful tidal currents.

10. Kaihoka Lakes
These two dune lakes north of Whanganui Inlet can be reached on a short track through luxuriant coastal vegetation. They are both beautiful and great for swimming on a hot day.

11. Kahurangi Point
A remote journey along a spectacular coastline south of Anatori River to historic Kahurangi Point Lighthouse and Keeper’s House. Both the Anaweka and Big River estuaries must be crossed and this can only be done at low tide. Heavy rain can also make the route impassable.