The Kepler Mountains lie in a stunning part of Fiordland where lakes, rivers and ranges intersect between the region’s two greatest lakes – Manapouri and Te Anau.

These mountains, and their ancillary ranges, make up much of the northern shore of Lake Manapouri and the southern side of the South Fiord of Lake Te Anau, with their foremost recreational feature being the Kepler Track Great Walk. This in itself is incentive enough to visit these high summits, yet there is so much more for the tramper, kayaker and camper.

Large, remote alpine lakes are a major point of interest and are associated with numerous post-glacial cirque, large catchments and few tracks; there are challenges here to test all comers. Access is difficult, with the only reliable ground route being via the Kepler Track. All other ways in will require boat or helicopter, so good planning is necessary. 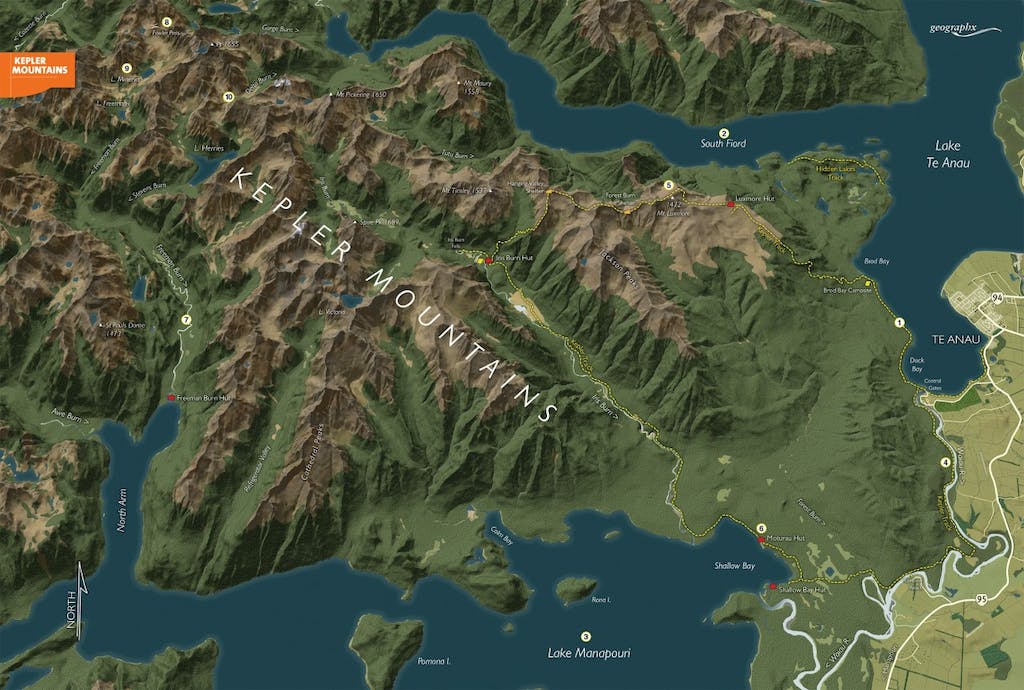 One of the most popular Great Walks in the country, the three-night Kepler travels from the shores of Lake Te Anau, over the crest of an outlier of the Kepler Mountains and down through the magnificent Iris Burn Valley to Lake Manapouri. This valley is also the best point for access into the central Kepler Mountains, past Iris Burn Hut and falls.

A very large, winding arm of Lake Te Anau, the South Fiord provides access, by boat or kayak, to the northern Kepler Mountains, its lakes and rivers, and Fowler Pass via Gorge Burn. This is hard, untracked terrain.

Often called New Zealand’s most beautiful lake, Lake Manapouri is a large, bush-fringed lake of many islands and surprising ruggedness. Its northern shore is the point for access into the Kepler Mountains.

Linking Lake Te Anau with Lake Manapouri, the Waiau River has a control gate at the Te Anau end and consists mostly of one channel of powerful flow between the lakes. It can be paddled in just a few hours in moderate flows and is a beautiful trip.

Probably the range’s most accessible and easiest summit, Mt Luxmore, 1472m, can be reached off the Kepler Track, above Luxmore Hut, and could be done as a day trip from the Lake Te Anau control gates.

This hut occupies a beautiful setting on the eastern shore of Lake Manapouri at Shallow Bay and is worth the time spent on a day trip from Rainbow Reach on the Kepler Track (Waiau River) to reach it. The easy track passes through lush forest and the hut offers magnificent lakeside views.

This valley was once proposed as the route for an alternative to the Milford Track. A track was cut and huts constructed in the 1930s, but it never gained popularity and has now fallen into disuse. The line of the old track can still be followed, with some difficulty, to the valley head. The huts are now dilapidated.

Lying at the head of Freeman Burn, Fowler Pass is an unmarked tramping route between the Freeman and the South Arm of Lake Te Anau. Strong navigational skills are required to reach it.

This lake was once the site of one of the huts built to facilitate the Freeman Burn Track route to Bradshaw Sound. It is remote and scenic, but the hut is a ruin.