Forming the divide between the upper reaches of the Rangitata, one of Canterbury’s largest rivers, Cloudy Peak Range is a destination for the adventurous and a means of access between the Havelock and Clyde rivers which combine to form the Rangitata.

Travel in and around the range is not easy – the Clyde in particular has a reputation for rapid flooding.

The north-western reaches of the range are guarded by glaciers and steep gorges, and tracks exist nowhere on or to the range, aside from the 4WD access road up the Havelock riverbed. For all this though Cloudy Peak Range commands an important niche for hunters, trans-alpinists, and those who seek the solitude of remote places.

At 2403m, Cloudy Peak is the highest summit on the range and is also relatively accessible from the Havelock Valley. Its massive western buttresses provide challenging routes for climbers on generally good rock.

A huge catchment which drains the Main Divide, where it flanks the Perth River in Westland and the Godley River to the west, the Havelock is a major gateway to the Alps in this sector and a key valley for accessing several challenging routes to the south and west. There are several valley huts, with most being on the west bank.

The Clyde is a much more difficult river to traverse as it has several large bluff systems which restrict its voluminous flow, no vehicle track, and a generally higher outflow than the Havelock due to the fact that it drains the extreme mountain country at its head, including the Garden of Eden and Garden of Allah ice fields.

The only hut standing at the base of the range in the Havelock, Curtis Memorial Hut requires a ford of the main river to reach. It has a commanding position on a rocky knoll above the valley.

Directly opposite Curtis Memorial Hut is Mistake Flats Hut on a large grassy flat near the junction of the Havelock and Forbes rivers. It has a superb view of the range and down the Havelock and can be reached by 4WD. 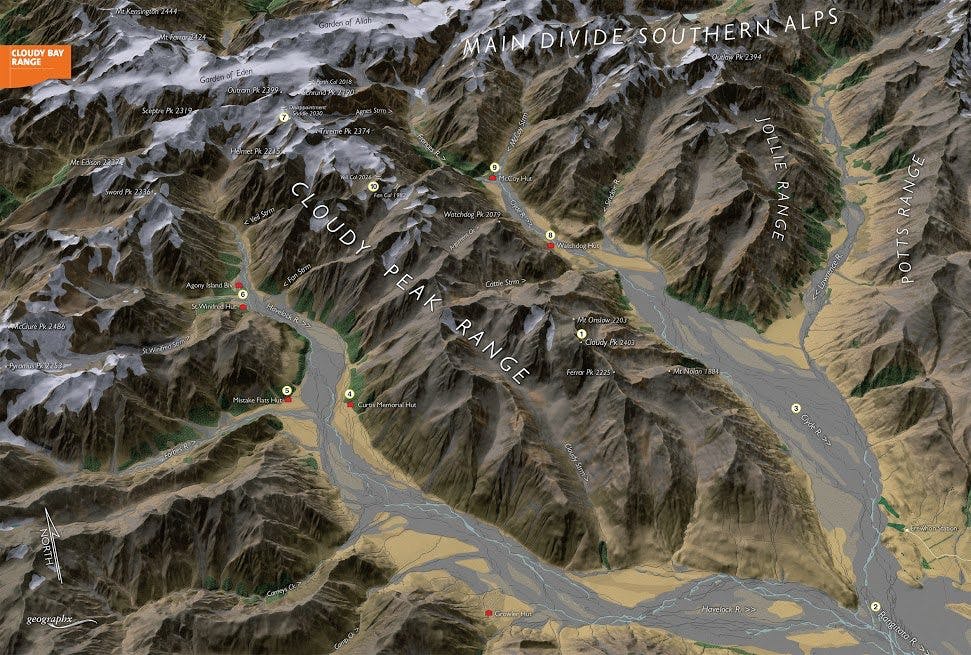 These two adjacent huts in the upper Havelock Valley make excellent bases for exploring the peaks and passes of the range. St Winifreds is a large Canterbury Mountaineering Club hut, while Agony Island Bivvy also belongs to the club and is being refurbished.

A mountaineering route in the upper Havelock providing access to the Garden of Eden via Shrund Peak and Perth Col, or the upper Clyde via Agnes Stream.

Sitting beside the Clyde River and directly beneath the towering summit of Watchdog Peak, 2079m, Watchdog Hut has six bunks and is a staging area for trips further up valley.

This is the only hut on the flanks of the range to the east in the Clyde Valley, it provides a stopping point en-route to the upper Clyde and Fan Col.

These two adjacent cols provide moderately challenging routes between the Frances branch of the Clyde and the upper Havelock via either Veil or Fan streams.