Links/Files
Download a pdf of the Geographx map (pdf, 14 MB)

WHEN NEW ZEALAND’S first national park was established at Tongariro in the late 19th century, access was long and difficult, and facilities practically non-existent. That didn’t stop a small trickle of intrepid tourists from visiting the famed volcanoes. By the early 20th century, with the number of visitors steadily growing, two public huts were built at Ketetahi and Waihohonu in 1903-04.

In 1908, the Main Trunk Railway Line, gave rail access to Tongariro, and in the ensuing decades, development in the park shifted to the western side with the opening of the Chateau Tongariro in 1929. Ski field development gathered pace and during the 1960s and 1970s, the Department of Lands and Survey built several huts, and established the well-known tracks in use today.

Now, with up to 2000 people walking the Tongariro Alpine Crossing on any one day in summer, and thousands more plying Ruapehu’s slopes in winter, the solitude-seeking tramper might sensibly stay well away.

However, many trampers will be surprised to learn the park has two wilderness areas. Both were established in the 1960s, when it was recognised that over-development was an issue facing Tongariro National Park. While they are small and lack a surrounding buffer zone (ideally the boundary would be 1-2 days walk in), they were the best the park could accommodate. Both areas offer experienced trampers the chance to go off-track to escape the crowds. 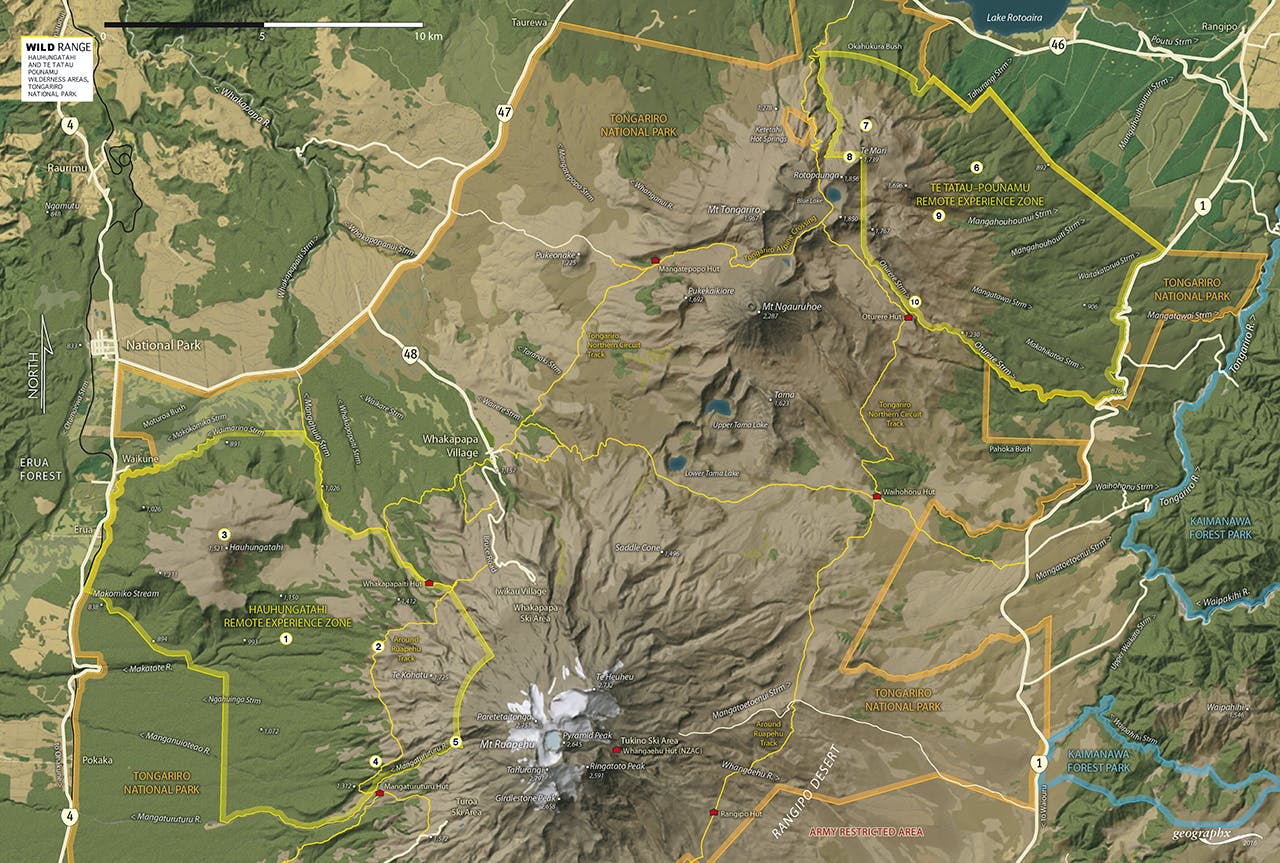 The largest of the two at 8500ha, this wilderness has the peak of Hauhungatahi as its central feature, but extends east as far as the lower flanks of Mt Ruapehu. Part of the Ruapehu Round the Mountain Track goes through the wilderness.

2 Ruapehu Around the Mountain Track

The section of track between Whakapapaiti and Mangaturuturu is one of my favourites in the park. Sidling above the bushline on the lower flanks of Mt Ruapehu, it weaves between lava bluffs, and crosses numerous streams, with alpine plants often lining the track-sides.

Hauhungatahi (1521m) is an extinct volcano with gentle slopes that emerge above a surrounding skirt of beech forest. It offers unsurpassed views of Mt Ruapehu. There used to be an informal track to the summit from near Erua, on SH4, but this is no longer accessible due to the need to cross private land. best way to access the mountain now is via the Round the Mountain Track or Whakapapaiti Track. Another approach begins from the Mangahuia Track, up an obvious beech-covered spur, just before the track fords the Mangahuia Stream. The summit is often boggy, with small tarns strewn about.

From Mangaturuturu Hut, the Ruapehu Round the Mountain Track crosses the Mangaturuturu River, then climbs steadily to a shelf where Lake Surprise occupies a shallow depression. In the right conditions, the lake offers fine reflections of Mt Ruapehu.

From Mangaturturu Hut it’s possible to visit the highest waterfall in the national park. Boulder-hop up the Mangaturuturu River for about 40 minutes. The river narrows into a small gorge, where scrambling is necessary in places, until you round a corner to see the 56m falls plunging over lava bluffs.

The 6500ha Te Tatau Pounamu Wilderness Area was gazetted in 1962, four years before the Hauhungatahi Wilderness. It’s situated in the north-eastern part of the park, with Te Mari forming its western edge.

In August 2012, when Mt Tongariro erupted for the first time in more than a century, it spewed ash from the Te Mari craters, and flung boulders into Ketetahi Hut, partially destroying it. The craters, named after a Maori chieftainess, are thought to have formed after an 1868 Tongariro eruption. They erupted again in 1896–97.

8 Te Mari
Te Mari (1739m) is the highest named summit in the wilderness area. It’s best reached from the Tongariro Alpine Crossing, where a scramble up Rotopaunga (1856m) offers fine views over Blue Lake. Te Mari lies a further kilometre along the ridge to the north-east.

10 Oturere Stream
Oturere Hut, on the Tongariro Northern Circuit, lies on the western boundary of the wilderness area. Near the hut, Oturere Stream tumbles over an attractive waterfall. Although riven by numerous streams, the landscape beyond offers relatively easy off-track travel, where you might explore more waterfalls in the Mangatawai Stream.