Three of the North Island’s most famous volcanoes

New Zealand straddles two continental plates and forms part of the ‘Pacific Rim of Fire’, where volcanoes abound, eruptions and earthquakes are common, and geothermal activity ensures the landscape is in a constant state of flux.

While the South Island features only extinct volcanoes, like those at Mt Somers and Banks Peninsula (now long dead), the North Island has several live or dormant volcanoes. Here are three famous ones. 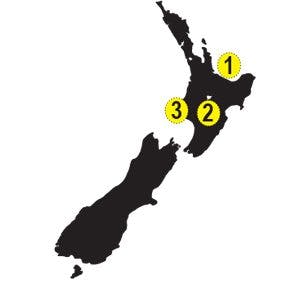 Whakaari has the distinction of being Aotearoa’s most active volcano, and steam issuing from the crater often obscures views of the island from the Bay of Plenty coast. Interestingly, the island was exploited for its sulphur during the early 20th century, but a landslide in 1914 killed 10 miners. One of the miners once described the working conditions as ‘the worst hell on earth, a place where rocks exploded in the intense heat … where the land shook violently and regularly sent rocks flying through the air’. These days, no one lives on the island, but commercial operators offer tours by boat or helicopter.

Ngauruhoe, with its blunt, flat top, steep scoria flanks and dark brooding presence is a classic stratovolcano, connected with nearby Mt Tongariro to form one volcanic complex. While it’s not as big as the sprawling massif of Ruapehu, the cone of Ngauruhoe stands out for its simple, bold form, and is visible from many places – notably from the 3-4 day Tongariro Northern Circuit.

Taranaki is arguably the shapeliest of our volcanoes. While from some angles it appears as an almost perfect pointed cone, from the west or south the subsidiary cone of Panitahi/Fanthams Peak gives the mountain a more complex shape. The Pouakai Range offers some of the finest viewpoints of Mt Taranaki; although many other good viewpoints exist on the Around the Mountain Track, notably at Holly, Lake Dive and Waingongoro huts. Syme Hut offers another splendid, up-close vista of the mountain. Although Taranaki last erupted a few centuries ago, it’s considered dormant, not extinct.

Take care when planning any adventure to a volcano. Check with DOC visitor centres about recent volcanic activity, and if you hear a warning siren, get to high ground as a lahar (volcanic mudflow) may be imminent. The 2012 eruption of Tongariro’s Te Maari craters, which partially destroyed Ketetahi Hut, is a reminder of how active this area remains.