The Raukumara Range is the northernmost of the long line of axial mountains that stretch from Wellington to East Cape. While the summit of its highest point, Hikurangi, rises well above the bushline (and is in fact the highest non-volcanic summit in the North Island), most of the range is by contrast heavily forested and riven by gorged rivers. It’s extremely rugged country, with little in the way of tracks or huts. Through it runs the mighty Motu, one of the country’s premier white water rivers.

Although the New Zealand Forest Service established the extensive (115,044ha) Raukumara Forest Park in 1979, this level of protective status was not enough to stem government plans for hydro-electricity.

Threats of dams in some of the most spectacular of the Motu’s gorges spurred a campaign by rafters and canoeists to protect the river, and also prompted a call from FMC for the surrounding area to become a wilderness area. In 1984, the Motu became the country’s first ‘wild and scenic river’, and wilderness status came in 1988. The Raukumara Wilderness Area encompasses 39,650ha. 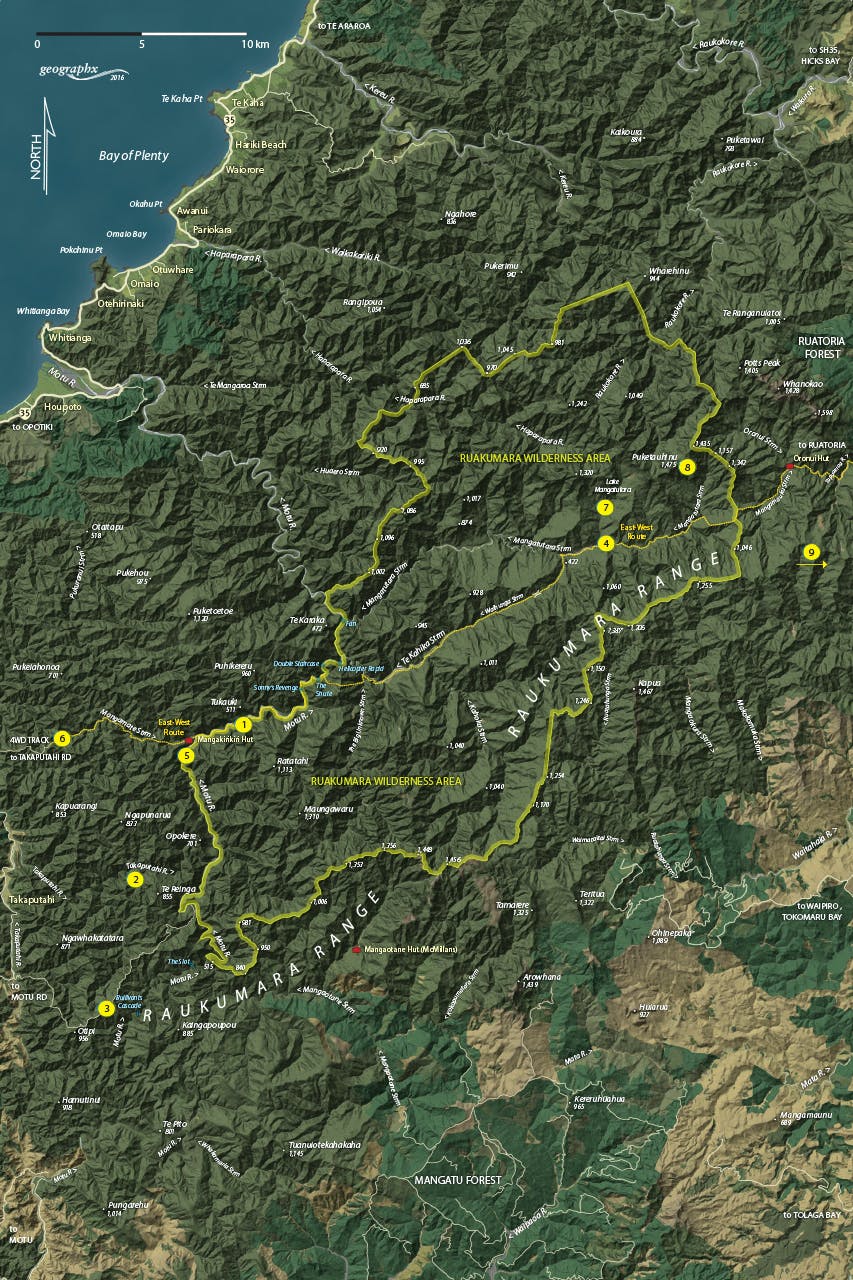 The Motu offers some of the best and most isolated rafting in New Zealand. A sinuous green watercourse that meanders through all points of the compass, it wends its way from hilly farm country through steep-sided bush country to finally reach the sea north-east of Opotiki. Although its rapids are nowhere more difficult than grade 4, the river’s remoteness and lack of escape routes make any paddling expedition a serious one. Some commercial companies operate trips down the river.

This major tributary of the Motu is itself a significant and rugged river, renowned for its monster eels and difficult gorges. Hydro engineers first explored the Takaputahi headwaters before its first full descent in the 1960s by a party of three, led by Forest Service ranger Bob Norton.

Bullivants Cascade is one of the more impressive of the Motu’s many named rapids. This one remembers river pioneer paddler Kahu Bullivant who, during the third descent of the river in 1953, was left clinging to a rock and had to swim the grade 4 rapid.

This difficult tramping route traverses the breadth of the wilderness area. Despite its name, it’s probably best tackled in the reverse (west-east) direction, beginning from Takaputahi Road and following down the Mangamate Stream to Mangakirikiri Hut. From there, the route follows the Motu River for some 10km, requiring a ford which can be impossible in all but low summer flow. The route eastward then follows several watercourses, including the Te Kahika, Waihunga, Mangatutara and Mangamauku streams to reach Oronui Hut, and finally exits down the Tapuaeroa River. Few trampers complete the route, although its misguided inclusion in an early edition of Lonely Planet’s Tramping in New Zealand saw several unfortunate overseas hikers attempt it. The route can be completed in as little as five days, but as many as 10 days should be planned for due to delays from weather or flooded rivers.

Mangakirikiri Hut is one of the few huts in Raukumara Forest Park, and one of only two within the wilderness area (the other is the Mangatutara). The six-bunk hut lies about 30 minutes’ walk from the Motu River up the Mangamate Stream.

Ironically, best access to the Motu River lies on an old 4WD route, pushed in by hydro engineers in the 1960s. Hunters on quad bikes often use the rough route, which is also suitable for mountain bikers. It reaches the river at a good campsite, where just upstream it’s possible to walk to the very impressive middle gorge in the Motu.

This small lake lies in the heart of the wilderness, perched in a small basin at 1113m. It’s remote and rarely visited; I don’t know of anyone who has been there.

8 Puketauhinu
At 1475m, Puketauhinu is the highest named summit in the wilderness area, lying near the eastern boundary.

9 Mt Hikurangi and Hikurangi Hut
Although not in the wilderness area, Mt Hikurangi (1752m) is included because it is one of the few accessible summits in the area, and one of the only decent viewpoints overlooking the vast Raukumara Wilderness. Ngati Porou manage Hikurangi Hut, which must be booked.