With an overseas friend on the verge of returning to Europe, I resolved to give him one final epic adventure. We settled on a walk up the Wilkin Valley in remotest western Otago with a night at Kerin Forks Hut.

To access the Wilkin Valley, the Makarora River must be forded, but it had been dry so the water was running low, reassuring us that we’d have no trouble.

We picked a likely looking spot not far above the confluence with the Wilkin, linked hands and waded in. Despite being ‘low’, the Makarora was extremely powerful and numbingly cold.

Still, we made it safely to the far side and collapsed on the bank to recover.

It was then across the vast stone Wilkin River flat to head up the wide rocky expanse of the valley floor.

There was not a single cloud to be seen, and soon we began to get uncomfortably hot.

The valley is certainly remote, walled in as it is by beech forest and cut off from civilisation by a fearsome river, but the effect is ruined a little by the constant jet boats, aeroplanes and helicopters ferrying (wiser?) travellers to and from Kerin Forks, from where they head to Siberia Hut.

After tiring on the rough stones under the scorching sun, we opted to try the marked track through the beech forest along the edge of the river. Blessed shade enveloped us, but we found the track to be extremely rough, all gnarly roots, fallen trees and steep climbs and descents.

We clambered along, while the cacophony of cicadas competed with the occasional bird call.

At the first opportunity, we returned to the river, having decided that the sun and rough rocks were preferable to the athletics required in the trees.

Eventually, we arrived at the golden grassy expanse of Dans Flat, likely named after ‘Yankee Dan’; Donald Caldwell, an early saw miller who rode a horse named Jumbo up the valley and into the top flats – one of which is now known as Jumboland.

There were no track markers here, the path up the valley being somewhat open to improvisation, but a tramping party ahead of us had left a clearly trampled trail through the dry grass.

Then it was once more into the beech and wonderful shade. We lunched under the trees before forging onward before emerging from the trees to gaze upon another vast desert of shadeless grass – Kerin Forks Flat.

Finally, we spied the hut on a hill overlooking the Wilkin River. But one test awaited us – the fording of the Wilkin. We picked a likely spot and shuffled across. Then, up the final hill, and I collapsed soggily onto the nearest bed.

There is an old cottage nearby, which may be the hut built by John Kerin, an Irish farming and gold mining pioneer who ran stock on this land until forced to abandon it in the 1890s due to a plague of rabbits.

After a sleep of the thoroughly exhausted, it was time to face the long march back to civilisation.

A mere seven and a half hours after we’d begun, we reached the Makarora River once again. We crossed the river and dragged ourselves to the nearby Makarora Tourist Centre for an enormous steak dinner accompanied by a mug of ice cold cider. 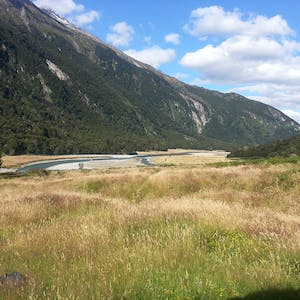 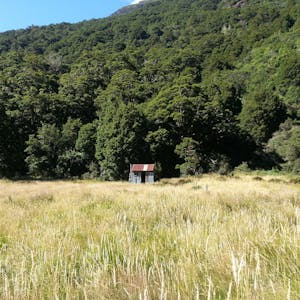 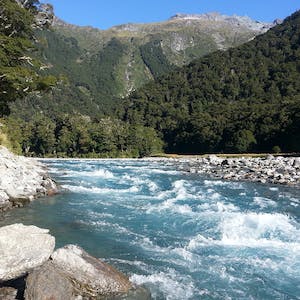 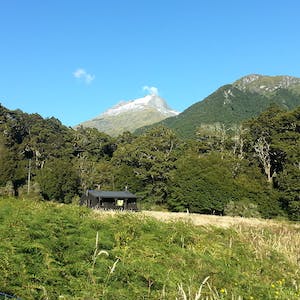