Access
From SH2, turn into Bells Road, halfway between Whakatane and Opotiki. It then becomes Matahi Valley Road

In 2013, the Te Urewera Act gave the former Te Urewera National Park ‘all the rights, powers, duties, and liabilities of a legal person’. A joint board was established to serve as ‘guardians’ of Te Urewera and to protect its interests.

Physically, the land is characterised by ridge after ridge of bush-clad ranges, rising from valley floors of significant rivers to over 900m above sea level. It is the largest surviving forest tract in the North Island, encompassing the Huiarau Range, which divides Hawke’s Bay, Poverty Bay and the Bay of Plenty. The vegetation is characterised as semi-coastal lowland forest, being relatively homogeneous in nature and largely comprised of beech forest to the south and rimu/tawa forest to the north.

It was to the north that we ventured, a region which contains more than 650 species, sub-species or varieties of plants and at least 48 bird species, including nearly all the extant North Island forest species (the exceptions are weka, saddleback and stitchbird). Most of these species require some form of active management to prevent their numbers diminishing. As we walked, the efforts of the Northern Te Urewera Ecosystem Restoration Project (commenced in 1995), also known as the Te Urewera Mainland Island, were very much in evidence. Dozens of pink, blue and yellow markers indicated bait stations, trap numbers, line names and track junctions, all part of a 20-year battle to reduce possum, rats and mustelids over 50,000ha. We had to be careful to follow only the orange tags.

The restoration project is one of the largest of its type on mainland New Zealand, and one with a twist. Here, they are not only interested in protecting and restoring the forest habitat, but also with finding ways to better conduct the restoration. 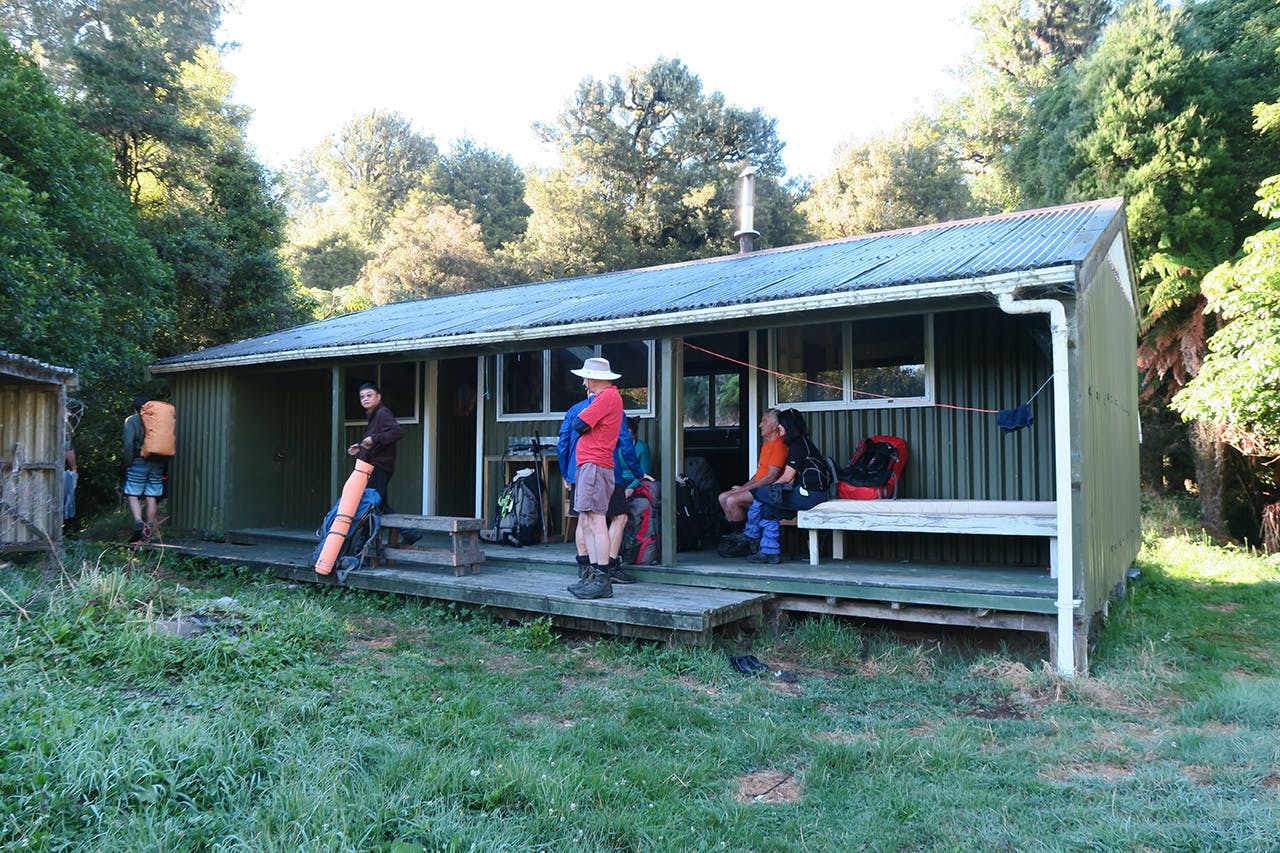 From the Lions Education Centre on Matahi Valley Road, we walked up Ngutuoha Stream for 30 minutes on the Koaunui Circuit Track to a small confluence. Between the channels a marked turnoff led us to climb steeply up ‘The Wall’ to reach Tawai Ridge. The ascent is aptly named: it rises 400m in just 3km. Another less steep option would be the Otamatuna Ridge Track from near Ogilvies Bridge. At the junction of Tawai Ridge, we headed south to Pt661 where we took a left-hand track which descended to Waiiti Stream. Form here, it was less than a kilometre downstream to Koaunui Hut. The hut, set on a picturesque terrace, has 19 bunks with mattresses, a log burner, plenty of cooking space and running water. There is a spacious deck on which to relax.

The next morning we made the long ascent back to Tawai Ridge and at Pt661 headed south along a waterless, undulating trail before we dropped into the Otapukawa Stream. We passed the Mangaone ‘staff use only’ hut and encountered several possums hanging by their heads from elevated snares, in various states of decomposition. We also admired several magnificent rimu.

Otapukawa Hut sits on an elevated plateau 800m upstream, just below the first confluence. The track to it is easily missed, because there is no signpost. (Follow the 4WD vehicle track on the true right of the river. Where it peters out, look for a narrow dirt path on the left).

Our third day was straightforward, but after heavy rain could prove troublesome. We followed the Otapukawa downstream, with around 40 shallow crossings. It was a pleasant stroll in sun and shadow, with the 4WD track guiding us on the most amenable path. Once at the road end, an easy 30min walk northwards completed our loop.

Our visit to this area highlighted the need to acknowledge and nurture the mauri of the northern Te Urewera ecosystem. The word ‘mauri’ can be translated as ‘spirit’ or ‘life-force’, denoting spiritual as well as environmental values. It was a worthy setting in which to enhance both.