On the eve of starting Te Araroa Trail, Victoria Bruce reflects on the journey that led her and her seven-year-old daughter to tackle a 3000km trail.

We arrived at Emilie’s 50th hut under the cover of darkness, clutching torches and laughing our way onto the porch.

It was 8pm and my seven-year-old daughter and I had been on the track for almost five hours, the last two in rapidly falling dark, navigating piles of windfall and listening to the eerie creak of beech trees rubbing in the wind.

To say we were relieved to see Wharfedale Hut was an understatement.

Once snuggled into our sleeping bags and full of warm homemade kai, I lay back to reflect on the day’s walk and previous tramps that had lead to Emilie’s momentous achievement.

It was mid-September and we’d been planning to bag Emilie’s 50th hut since the June school holidays. But a combination of horrendous weather and questionable location saw us stuck for two days up the Taipo River in our tent. We were just 800m and on the wrong side of the creek from the historic Dillons Homestead and Dillons Hut, huts number 48 and 49. Julia Hut, further into Arthur’s Pass National Park was to be hut number 50.

So here we were, with 50 huts under our belts, including the novelty of walking through the dark and claustrophobic beech forest, shining our torches into the night and feeling like a pair of badass bush girls.

Now we’re embarking on the biggest tramp of our lives, walking 3000km over six months on New Zealand’s Te Araroa Trail, so I thought it was worth looking back to where we started.

We set out on our first overnight tramp, anxious and overloaded, me dragging my then four-year-old daughter along the Miners Track to Woolshed Creek Hut, an iconic first hut for many Canterbury families.

I had little idea what to expect, other than if I followed a set of orange poles I’d eventually make it to the hut. I was carrying three litres of water, a pair of bulky borrowed sleeping bags and a gas cooker still in its packaging, but had never heard of a topographic map or personal locator beacon.

Since then, we’ve endured snowstorms, flooded rivers, sweltering summers, bush bashing and wild weather. Each trip built upon the previous one, carefully learning and gaining experience as we figured it all out and pushed ourselves to go further, deeper into the backcountry.

Along the way, we’ve upgraded our gear to be as safe and lightweight as possible, learned how to dehydrate our meals and built our confidence and passion for spending long periods of time in the outdoors.

One of the most memorable tramps was six sun-filled days in Kahurangi National Park, including a night in our tent under Dry Rock Shelter while weka scuttled around outside.

One of my fondest memories is from hunkering down in tiny Cupola Hut in Nelson Lakes National Park during a storm with two off-duty DOC rangers, who entertained Emilie by showing her how to sketch native plants and birds.

We spent four days on the Rakiura Track listening to rowdy kiwi call to each other in the night and later wandered through a winter wonderland in Hakatere Conservation Park during a snowstorm. 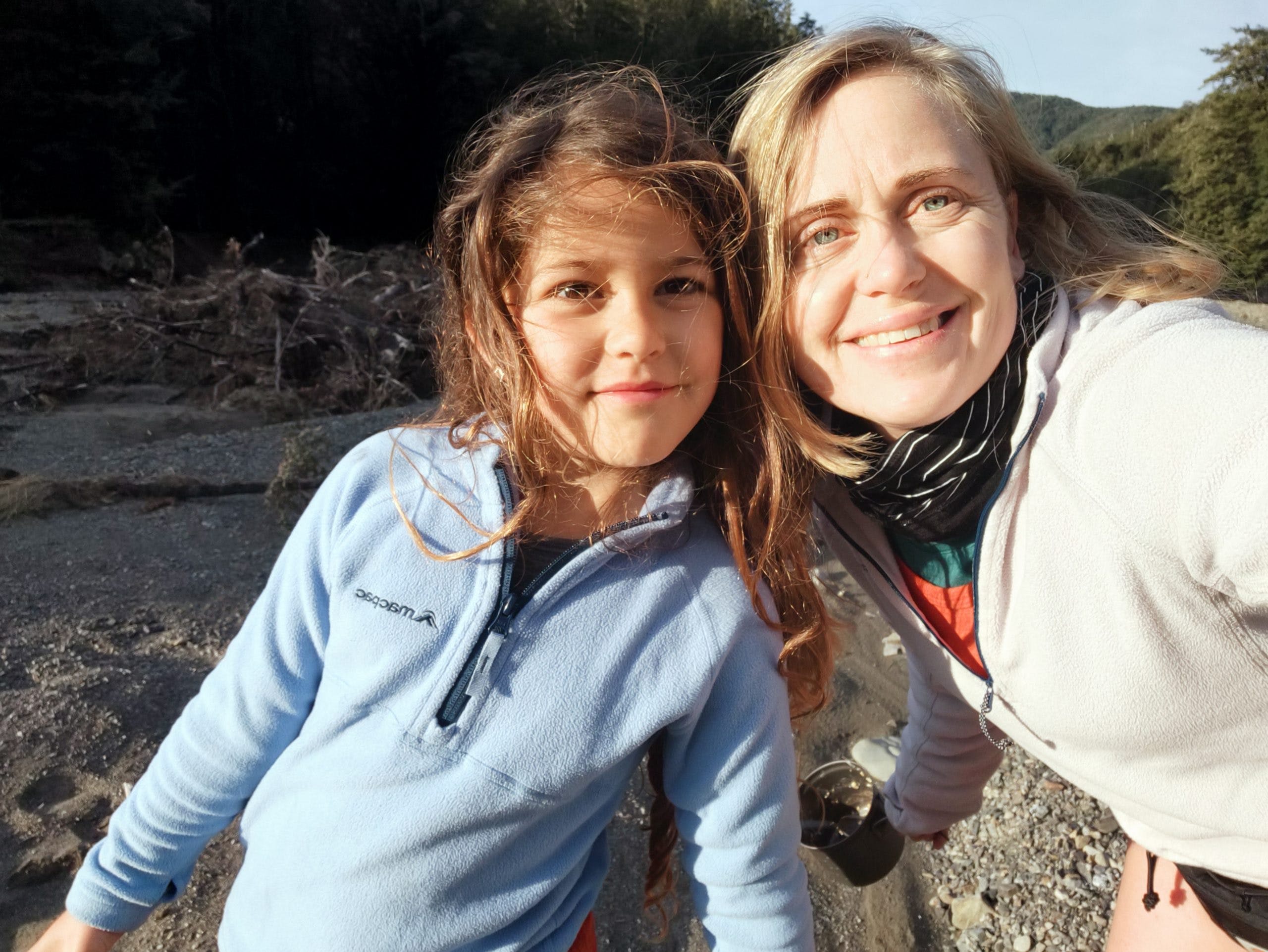 After three years of tramping and building up experience, Victoria and Emilie are ready for Te Araroa Trail. Photo: Victoria Bruce

I often look at my daughter and marvel at how far she’s come from her tentative first tramp. Now she strides through muddy puddles and creek crossings without a second thought, navigating difficult terrain with strength and confidence beyond her seven years.

I see this confidence flow into her approach to life, as she calmly navigates challenges from schoolwork to socialising. She’s rarely afraid to try new things and shows a deep interest in the natural world, wanting to understand how things work and why.

When I ask her what she loves best about tramping, she says it’s the people we meet. Anyone who’s met this girl on the track or at a hut or campsite will know what I’m talking about.

Little Miss Chatterbox just loves rocking up to a hut and meeting new people. And if they’ll share a joke, a game of cards or UNO, or even better some of their snacks, they’ll have a new best friend for life.

Emilie is generous with her love and her time and for her, the social aspect of tramping is as good as, if not better than, the walking and exploring.

I’m sure there will be plenty of new people to chat to and new huts to play house in on Te Araroa Trail. This journey is part of my recovery from post-traumatic stress disorder, a mental health condition that developed following terrifying events in my teenage years. I’m walking the trail partly to heal these childhood hurts and to make wonderful memories with my daughter while spending time in the healing power of nature.

There’s heaps of evidence to show how spending time in nature is good for our well being. Reconnecting with it has been a massive part of my own recovery.

I’d encourage anyone with an interest in the outdoors to get out there, keep safe and warm but don’t overthink it; just go and enjoy it. And if you see us on the trail, come and say hello or share a round of UNO; we’d love to see you.