Access
From the end of Jig Road, off Ashburton Gorge Road

Feeling the need for a little altitude and some new views, I headed to Mt Somers to explore the tracks it had to offer. From the Woolshed Creek car park there are a few options of routes and I decided to take the longer Rhyolite Ridge on the way up, and come out along a different track.

While climbing and walking the ridge, knee-high khaki colored shrubs dominated, fading in places to a much darker rust colour. This corrosion worked its way up the side of the ridge, expanding with an individual bush here or there, and continuing its spread along the rocks and boulders nearby.

About halfway along the track, Bus Stop Overhang provided some great views of the surrounding peaks and valleys. The lookout is named for an overhang and rock formation that would provide shelter in a downpour. Immediately after, the track descends into the headwaters of Woolshed Creek. A sidetrack takes walkers to a 5m-high waterfall which is well-worth the diversion. Two-tiered, the top half illuminated by the sun, the falls tumbled into a boulder pool. The stream continued on to a few smaller falls, eventually careening off an edge that I could not get near enough to see.

Woolshed Creek Hut sits beside the creek with the Winterslow Range towering above it. With plenty of daylight left, I continued on the Mt Somers Track, intent on reaching Pinnacles Hut. The track gains more than 300m altitude on the way to a large saddle and I found myself regularly punching holes up to thigh in the old crusty snow. I still managed to reach the 1170m saddle in around an hour. It was a bluebird sky day with a warm breeze and walking through snow in just a polypro is always a bit liberating. 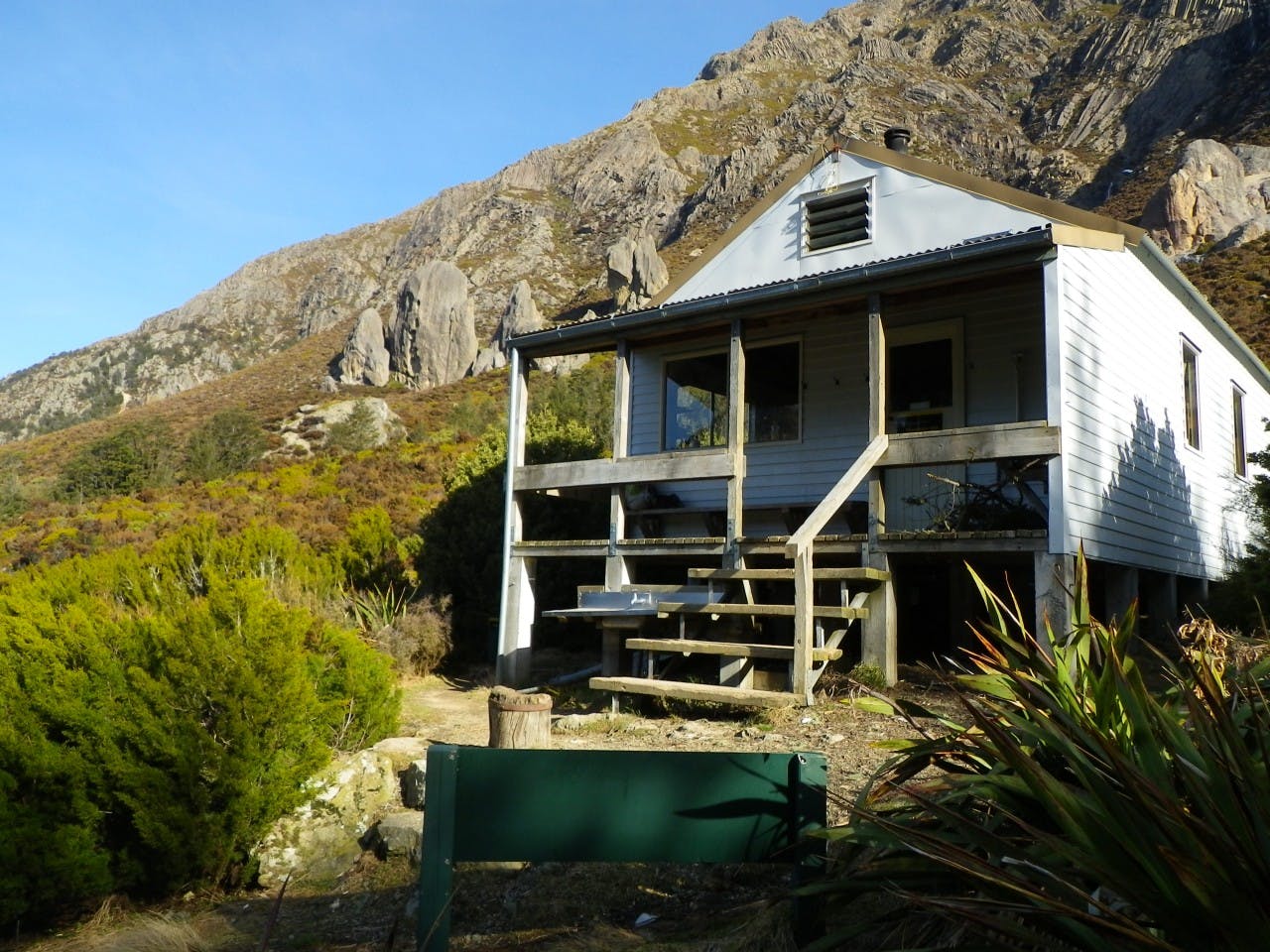 Closer to my destination, waterfalls materialized out of the rock and plummeted down the mountainsides. A valley of pale green appeared below and the rock formations that the Pinnacles Hut is named after grew out of the slope ahead. Awkwardly arrayed in a place they seemed uncomfortable and yet accepting the responsibility of watching over the Boyers Stream Valley, including the Pinnacles Hut.

The forest surrounding the hut was dominated by trees the color of coal, giving an effect of silhouettes with leaves. Lichen and moss attached to these and when I looked closer, filaments the size of the smallest fishing line extended outward, each individually tipped with one droplet of water.

I gathered water for the night and sat on the hut’s steps while darkness approached. A town twinkled across the Canterbury Plains at the base of the Port Hills, linking my vantage point in the wilderness to the rest of the world.

I awoke with the sunrise and opted to retrace my steps to Woolshed Creek Hut from where I took Miner’s Track back to the car park. This track takes in some old mining equipment where I saw the date 1871 on a wagon wheel.