An Easter trip down to Central Otago, far away from the almost daily shakes and ongoing demolitions of Lyttelton, offered a much-needed getaway. Based at a friend’s place by the shores of Lake Hawea, our plans didn’t extend beyond some gentle autumnal biking among the colourful cycleways that liberally wander across the landscape.

From the deck of our lakeside pad, the rugged mountainside rising above the eastern shore of the lake filled our field of view. A DOC friend we bumped into while out biking informed us of the newly built Pakituki Hut, with its access track, Breast Hill Track, starting only a few kilometres from our Lake Hawea base. Constructed as a section of the Te Araroa Trail, this new track on our doorstep was the catalyst required to lure us away from post-quake lethargy and back into the great outdoors.

Easter Monday found us tackling the initial steep 350m of zigzag track from the road as it passed through rough farmland. Above a small saddle, the ridge narrowed quite considerably as the well-marked track wove its way through small bluffs and along exposed ledges. The frequent steep drop-offs with a good, but narrow, track ensured that interest levels didn’t wane as we dealt with the 900m climb towards a rocky ridge on the skyline.

The valley side all around us was unrelentingly steep as it dropped down to lake level, being frequently riven with deep gullies separated by sharp tussock-covered ridges. Our tenuous route offered what seemed to be the best option on an otherwise inhospitable face.

The views across the vast expanse of Lake Hawea to tantalising glimpses of ranges hiding behind afternoon cloud provided a new angle on well-travelled and familiar peaks. Already I was mentally preparing to rise early for sunrise photos over the Mt Aspiring region to the west.

The ‘4 to 5 hour’ trip as stated on the signage below took us three-hours, which is more or less what I’d expect for a climb of nearly 1000m up fairly steep ground on a good trail. Pakituhi Hut is situated among rolling tussock lands at about 1280m. It’s a landscape in complete contrast to the rugged mountainsides only five-minutes back along the track. 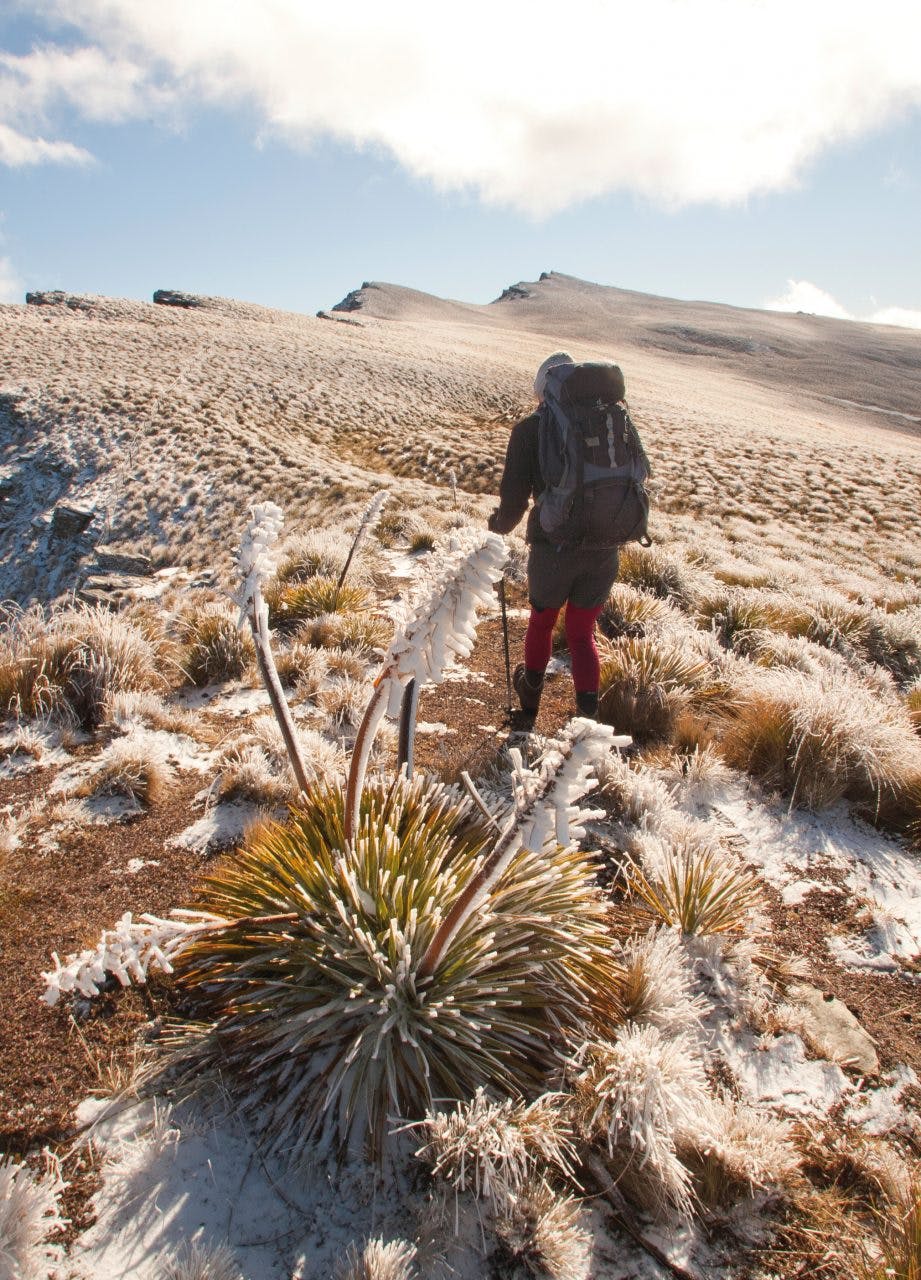 The eight-bunk hut still smelled new, with a family of four locals already ensconced in the upper platform. Their two young children, one a pre-schooler, soon put our efforts on the steep mountainside below into perspective.

An eerie, pre-dawn glow suffused my semi-consciousness as I battled with a warm sleeping bag versus a photographic excursion to the ridgeline above the hut. The waning moon illuminated an unexpectedly bright landscape outside the hut as it dawned on me that we were now surrounded by snow, something that hadn’t crossed my mind during this quick jaunt into the hills.

The inclement weather at least allowed for a very lazy start to the day, but by late morning, patches of blue encouraged us to head off through the snow in the direction of nearby Breast Hill. This is a part of the two to three-day loop that includes the old musterers’ Stody’s Hut and a return via the Timaru River Track to the north.

We were happy enough to kick through the first snowy tussocks of winter along a delightful ridgeline to the top of the 1578m Breast Hill. Although its shape seemed to bear little resemblance to its name, it offered uplifting views of the now-appearing ranges westwards. Treble Cone and Black Peak were clear to the west, along with the unmistakable outline of Mt Earnslaw peeking up behind.

Further north, the classic wedge of Mt Aspiring dominated the skyline, with the peaks of Castor and Pollux, situated at the head of the Wilkin Valley, clearly visible to the north-west.

A glacial landscape par excellence, and from this lofty vantage point it wasn’t hard to imagine an immense glacier filling the mountain trough now occupied by Lake Hawea, the evidence is everywhere among this dramatic scenery.

By early afternoon the sun had melted any lingering snow on the steep descent slope, which caused us no concern apart from sore knees and toes, soon to be soothed by hot baths and red wine at the fine house barely 10 minutes drive from the end of the track.