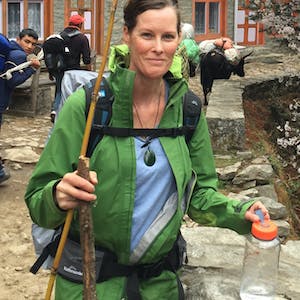 Read more from the
September 2019 Issue

Read more from the
September 2019 Issue

Spring is the best time to walk the increasingly popular Cape Brett Walkway because it’s not too hot. Jenny Ling uncovers other advice to help you plan your hike

Be prepared for your lungs and legs to burn and your knees to cry out in pain.” That sums up the challenging Cape Brett walk in the Far North that has tested many a hiker on its gruelling hills and sheer ridgelines.

It’s one of the recollections Whangarei woman Katrina Gysberts has of the time when she and her six friends walked the track which spans from the tiny beachfront settlement of Rawhiti to the Cape Brett lighthouse.

She also remembers vast oceans, amazing birdlife and “views that blew us away”.

Which is what draws people to Northland’s most epic trek and makes the hard slog worth it.

Accessible via Russell in the Bay of Islands, the track starts at Oke Bay in Rawhiti and snakes through 16.3km of regenerating bush taking anywhere from six to eight hours. At the end trekkers can bed down at the DOC hut, near the historic lighthouse, before catching a water taxi back the next day.

Gysberts and her friends walked it the other way, catching a boat to the Cape, then walking to Rawhiti during a day trip from Whangarei.

“We found it challenging, but our fitness levels are quite good,” she says. “There was definitely a lot of hill climbing when we thought ‘oh my gosh, is it ever going to end?’ We knew it would be hard, and it certainly was but the views blew us away.

Cape Brett can be walked at any time of the year, and trampers must carry food and clothing if they plan to stay ovenight, along with plenty of water as there is nowhere to refill water bottles.

Gysberts was fortunate; the weather was perfect and the track dry. Despite its challenges, she “absolutely” recommends the walk.

“Cape Brett exceeded our expectations,” she says. “The views are amazing and so worth it and having a group of friends along made it all the more worthwhile. But be prepared for your lungs and legs to be burning, and if you’ve got any knee issues the downhill parts will make your knees cry out in pain.”

I did the walk with my husband and a friend in May 2016 and would suggest people pack light – then grit their teeth and begin.

It took us about seven hours to get to the DOC hut and by then, the pain in my left knee was immense. I saw people actually walking backwards to try and avoid their knee pain.

On the plus-side, there is dramatic scenery and much of the walk is shrouded by bush cover, so you’re not walking in the searing sun.

From July 2018 to June 2019, 2471 people stayed at Cape Brett Hut. DOC recommends a high degree of fitness and experience in order to tackle the track.

Community Ranger Helen Ough Dealy, who did the walk 20 years ago, says spring and autumn are particularly good times to go, as it’s not too hot.

Trampers should ensure they have boots that are well-worn in, and they should take hats, sunblock and warm clothing. Ough Dealy says it’s vital to check the weather because “even though this is the winterless north, people can still come down with hypothermia if you’ve only got light clothing”.

“Because you’re carrying water, which is heavy, and you’re carrying a reasonably weighted pack with food and gear, you need to be fit. It’s not a walk for people in jandals.”

For those less fit or pushed for time, the other options are to get a boat into Deep Water Cove and walk 2.5hr to the Cape or get a boat the whole way there.

The hut costs $15 a night and trampers must also pay a $40 track maintenance fee for crossing 10km of privately-owned Māori land between Rawhiti and Deep Water Cove. There’s also the cost of the water taxi; about $50 per person with a minimum charge of $250.

Cape Brett Walkways is responsible for the maintenance of the Māori land on behalf of Rawhiti 3B2 Trust. Coordinator Peter Stuart says the track gets used by all sorts of people including tramping clubs, schools, Duke of Edinburgh participants, scouting groups and overseas and domestic tourists. This March, 300 walkers used the track, which was a record number to date, he says.

Stuart says most trampers are “pretty responsible” at removing rubbish and leaving the track as they find it. His advice is to start the trek early if walking in winter in order to finish in daylight and make sure you’ve got lots of water in summer.

Ough Dealy says wildlife is another highlight. Trampers can sometimes spot orcas, dolphins and seals and there is plenty of birdlife thanks to an extensive pest control programme. “It’s a challenging walk but there is a huge sense of achievement,” she says. “It’s not just the length of the walk, in places it’s quite close to the edge. People who get a bit of vertigo or are not happy about heights might find, as I did, you’ll be on your knees in a couple of places.”

There are some historical gems that make the walkway unique, like the 14m-high Cape Brett Lighthouse, which was first lit in 1910 and has guided many seafarers to safety.

The current DOC hut, which has 23 bunk beds, was once the lighthouse keeper’s accommodation. The more than 100 keepers who looked after the station over its lifetime not only acted as lighthouse keepers but also as postmasters, weathermen, butchers, gardeners, carpenters and painters.

Ough Dealy says the track is well worth the effort and recommends people stay more than one night. “Part of the experience is finding things to do, doing a bit of fishing off the rocks, or snorkelling and just being away from cell phones and technology,” she says.

“If people want to have a real ‘get-away-from-it-all’ experience, it’s well worth doing. You are really isolated, and that’s a rare experience for a lot of people. To be able to look across the sea and realise there’s no land between you and the Pacific Islands and as far as South America.”

Access
Drive to the Rawhiti Road end; the track begins at Oke Bay