Time
Allow up to three days depending on fitness and conditions

My dictionary defines a mole as ‘A small burrowing … animal’, so it seemed appropriate to pass through the Mole Tops on our way to dig a snowcave high on the Ella Range on the south west fringe of Nelson Lakes National Park. However, I wasn’t so sure about the rest of the description, with ‘very small eyes and paws like miniature hands’!

I met Gaylene, Kevin and Elly in a Murchison cafe. Adrian and Laura joined us and we headed for the Matakitaki Valley and its wonderful red beech forests.

The Jameson Ridge Track leading to the tops has long been a favourite of mine. Near bushline it wanders along a broad flat ridge of mountain beech where open glades of dry golden Dicranaloma moss offer the most perfect campsites. There is no water here though, only tarns further up above the bushline. Nearby in Mole Stream, DOC has replaced the old bivouac with an excellent two-person hut that is popular with hunters.

Winter had come and nearly gone from the Mole Saddle area, but there were still decent snow banks higher on the range. You don’t need to be high in the central Southern Alps to snowcave; winter in the Tararuas had taught me that. The ridge was now more serious but travel wasn’t difficult. Later in the afternoon, continuous snow basins led us southwards and we chose a site somewhere above 1700m. We hadn’t brought any specialised shovels to dig with. Instead, we used what I have used many times before, our ice axes, a hearth shovel and plastic bowls.

Digging the tunnel is always a bit of a challenge. You just have to put on wet weather gear and get into it. Kevin and Elly, digging their first cave, were soon hacking away. We were tucked up near the ridge. I’m a big fan of choosing sites to suit the occasion. Ever since the early 1970s when I helped dig a group out who had lost consciousness after being blocked in a cave by metres of fresh snow high on Ruapehu, I have been wary of digging into lee slopes. And lee slopes change when the wind does.

These days I often find myself hedging bets by digging in near the crest of a ridge where it is free of cornices, far enough down not to wash out overnight, but close enough to punch up through if unexpected snowfall makes digging out the entrance impossible. But we didn’t need to worry about that. 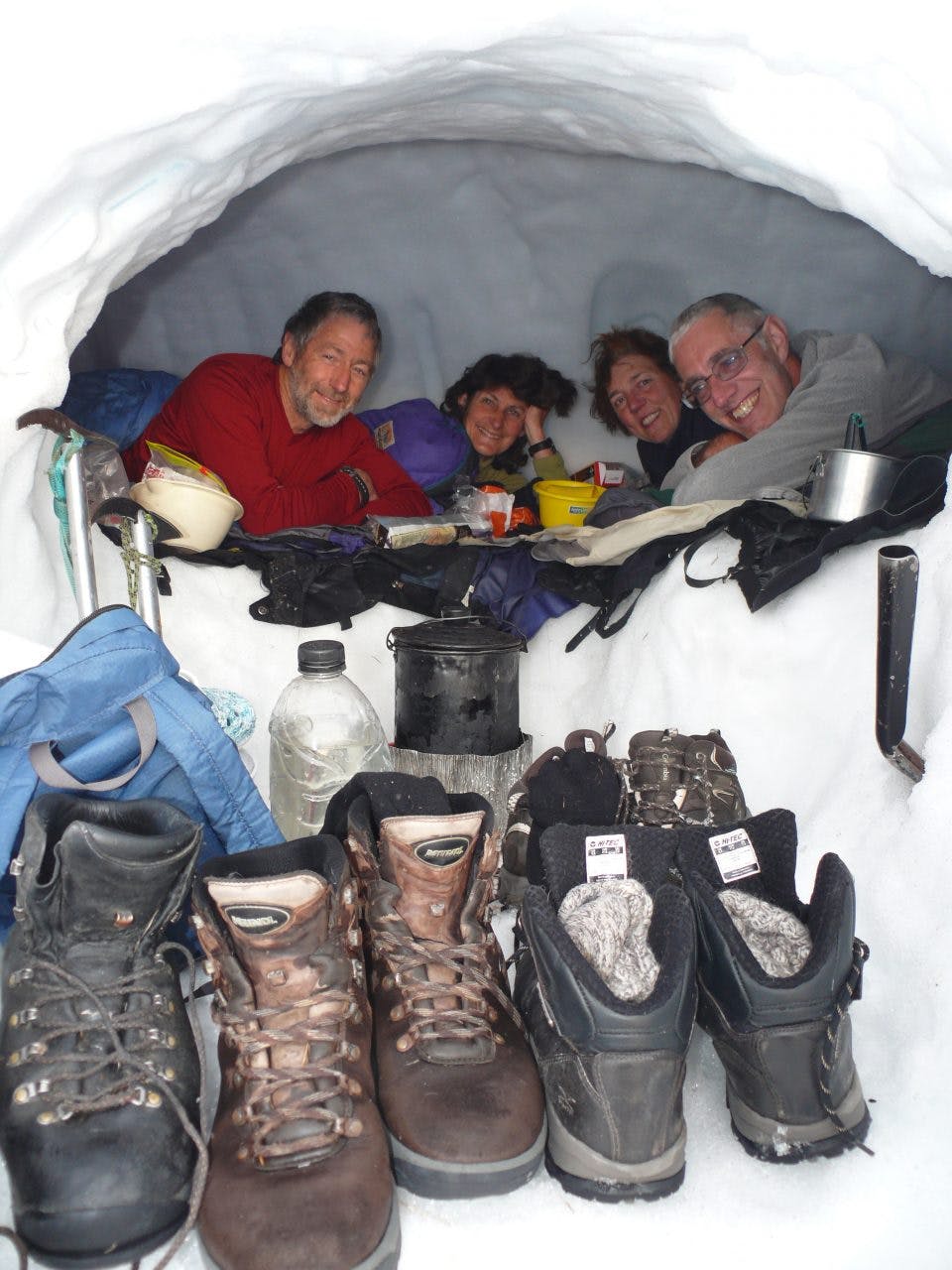 The night was superb. Four of us tucked into our snow cave after watching a full moon of white gold rise as the Travers Range faded into purple and indigo. Adrian and Laura shared a tent nearby. What a stunning life the mountains offer. Inside the cave, I’m reminded again of the bombproof security snowcaves offer from the elements, and revel in the way one candle lights the whole place. We snuggle into our warm down bags while out through the entrance all the chilled silver mountains freeze. Only the rustle of chocolate wrappers disturbed the dark.

Sun streamed in the entrance before we’re out of bed. We had a fair way to go on the second day. One or two steep snow slopes took us over a shoulder east of the range, then easier travel took us on to Mt Watson. Looking towards the Travers Range, we varied in our opinions as to what was Mt Travers and what was Mt Cupola. It all seemed a bit ‘Hopeless’ trying to guess and eventually the map sorted it. Mt Ella at 2263m was only 6km further along our range, but there wasn’t time for that today. Something to come back for. In fact there are lots of things to come back for here, and for those with basic mountaineering skills a traverse along the whole range, climbing Ella on the way, and finishing down the tarn-studded ridge that descends to the East-West Matakitaki Forks would be a wonderful trip.

A rocky ridge took us airily along until about 1860m where we swung off the Ella Range and headed west, towards a major spur leading down into the Matakitaki. Time had gotten away on us, as it often does when travelling in soft snow. Tonight we were after a bushline camp with a fire. We found a great spot, but it only worked because there was a small snow bank for water.

There is a track marked down this spur on some maps. And sure enough, next morning a bit of unobtrusive permolat on bushline beech showed where it started.

Regrowth had claimed some of the permolat on the broad bushflats near the bottom, but bits of tape helped. I added to it, and we stumbled out onto the 4WD Matakitaki Valley Track about 1km south of Peak Creek.

Lunch by the river with a brew over a manuka fire completed an enjoyable trip.