A belief that the Tararua Range is really just a bigger version of Otago’s Silver Peaks keeps drawing me back to the place that is arguably the spiritual home of tramping in New Zealand. The range was the original stamping ground of the very first tramping club, the Tararua Tramping Club which is still going strong 92 years after it formed. Its founders explored the range’s ridges and valleys and left their names scattered across the map.

My interest in this legendary range has been aided by having a few mates who are Tararua enthusiasts living within striking distance of the range. They don’t need too much arm twisting to head for the hills with a Dunedin boy whenever I can tag a few days onto a trip to Wellington. Sometimes the gentle arm twisting is mutual. When Hutt Valley Tramping Club life member Graeme

Lythgoe proposed a Southern Crossing, I leapt at the opportunity. Fellow Dunedinite Rob Mitchell made it a party of three.

We set off from Otaki Forks on a muggy Sunday morning. The tops were clagged in – legend says it’s that way on 200 days a year – but the heat gave us hope that the cloud would burn off. After a brief detour to Parawai Hut, we headed up the wide gravel path. Otaki Forks is popular with day trippers and campers, so the path reflects the needs of those users. Eventually the regenerating scrub gave way to mature forest and the track became the expected muddy trail weaving amongst trees. A spot of downhill suggested that we’d crossed Tirotiro Knob and shortly we reached the clearing containing Field Hut. It’s the oldest purpose built tramping hut in the country, dating to 1924, and was the Tararua Tramping Club’s first major project. It was named for one of the club’s founders, local Member of Parliament Willie Field.

The hut was a good spot to stop for lunch, and then it was a short climb to the bushline. Judd Ridge stretched towards Dennan above us, while behind us were views of the coast and Kapiti Island.
When we reached the junction with the Main Range route towards the Tararua Peaks, it seemed like a good spot for a long break to just enjoy the surroundings. No doubt many trampers scurry past this post, unwilling to incur the wrath of the weather as they race for the shelter of Kime Hut. Eventually it was time for us to head that way too, but not before I’d dashed up Bridge Peak, one of many innocuous bumps along the way to be named for local backcountry identities – in this case, 1950s search and rescue guru Bill Bridge. 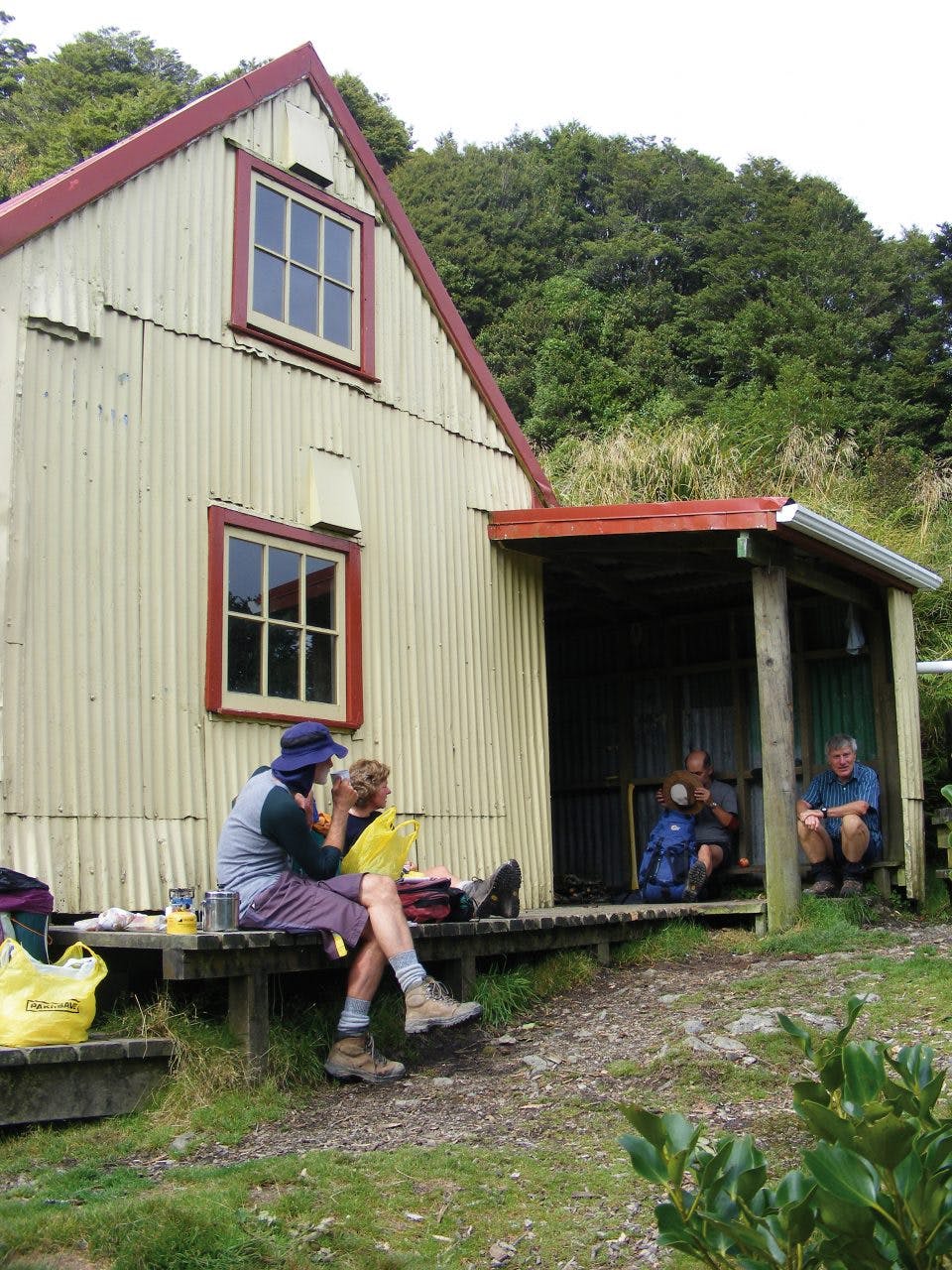 Kime Hut is the highest hut on the range and, with its high ceiling and no heating, has a reputation for being one of the coldest. But our lovely day had meant that it was cosy enough, even with just five occupants. By bedtime, the hut was surrounded by swirling mist. A few hours later, the mist was gone and replaced by full moon lighting up the tussock. But by morning, it was swirling mist again. Graeme was almost apologetic for us missing the views that he assured us were worthwhile, but I wasn’t too disappointed. There’s something quite special about the combination of tussock and mist.

A short climb around Hut Basin coincided with a brief clearance and a chance for a quick photo of the hut, and then we dropped a bit before commencing the sharp ascent to Mt Hector. It was great to finally see the famous memorial cross, even if that was all we saw. A whole series of small named bumps – the Beehives, Atkinson, Aston – had to be crossed to take us to the Dress Circle, a wide sweeping ridge that leads towards Alpha. Occasional clearances allowed a glimpse of Wellington Harbour in the distance. From Alpha, the ridge that divides the Hutt and Tauherenikau catchments descends to the bushline and soon leads to Alpha Hut to end a short day.

Alpha’s a pleasant hut, with a split level layout. In common with many bushline huts, firewood is a scarce commodity, as generations of trampers have removed any bit of wood that’s not attached to the ground and, judging by the many stumps, plenty that is attached.

Morning brought rain, which turned out to be our constant companion for the day. The descent to Hell’s Gate was followed, infuriatingly, by regaining most of the lost height to join the Marchant Ridge. The ridge meanders along, seemingly not making progress of any sort, until a short climb to Marchant itself. The scene of a big fire in the 40s, I’m sure this was a bleak place for many years. Now there’s nice regenerating scrub amongst the charred skeletons of mighty trees, testament to the forest’s ability to heal itself.

A sharp descent took us to the site of Dobson Hut and a turn-off leading to the Tauherenikau Valley. We took the other option, following an old vehicle track to the car park at Kaitoke to conclude a very good trip.