Access
From the end of Grasmere Road, off SH73

It was clear and cold at Bealey Hut. The old Forestry Service six-bunker was the starting point for our two night trip on the Cass-Lagoon Saddle Track near Arthur’s Pass. The plan was to head in to Hamilton Hut via Cass Saddle and out via Lagoon Saddle. The forecast was for good weather both days, with a southerly having just blown through the day before.

Pete, Aly and I enjoyed several brews as the sun rose over the snow-clad hills, then packed up and drove to Cass, where we set off from the car park. I was excited to start my first South Island tramp, having mostly cut my tramping teeth in the Tararuas. Almost immediately I began to understand what my brother, a veteran of many South Island trips, had meant when he told me it was ‘big country’. The comment had seemed cryptic at the time, but heading up Cass Valley it all suddenly made sense. I felt well and truly dwarfed by the sheer scale of my surroundings, from the wide, flat river valley to the steep and snowy peaks looming large in the blue sky.

Boots were the first casualty of the day, wet early on from crossing and re-crossing the Cass. After what seemed like countless crossings, we finally reached the bush line. By this stage the sun was well and truly up and it was shaping up to be a magnificent day.

The trip through the beech forest became increasingly slow going as the track steepened and the snow became deeper. The track is not particularly well marked in places and we were grateful for the group who had been through two days before – their footprints guided us all the way! After what seemed like an interminable trudge through the snow, Aly finally sighted Cass Saddle Hut where we gratefully sat and had lunch.

It was an amazing feeling to emerge from the bush at long last and begin our ascent over Cass Saddle bathed in winter sunshine. The sky was absolutely clear and the intensity of the blue and white landscape around us dazzling. So enchanting were the surroundings that the climb seemed pleasantly manageable and we were soon right atop the saddle. We spent several minutes taking in the landscape. The quality of silence on Cass Saddle was breathtaking. Not even a whisper of breeze disturbed the peace of our surroundings – it was sheer tranquillity. 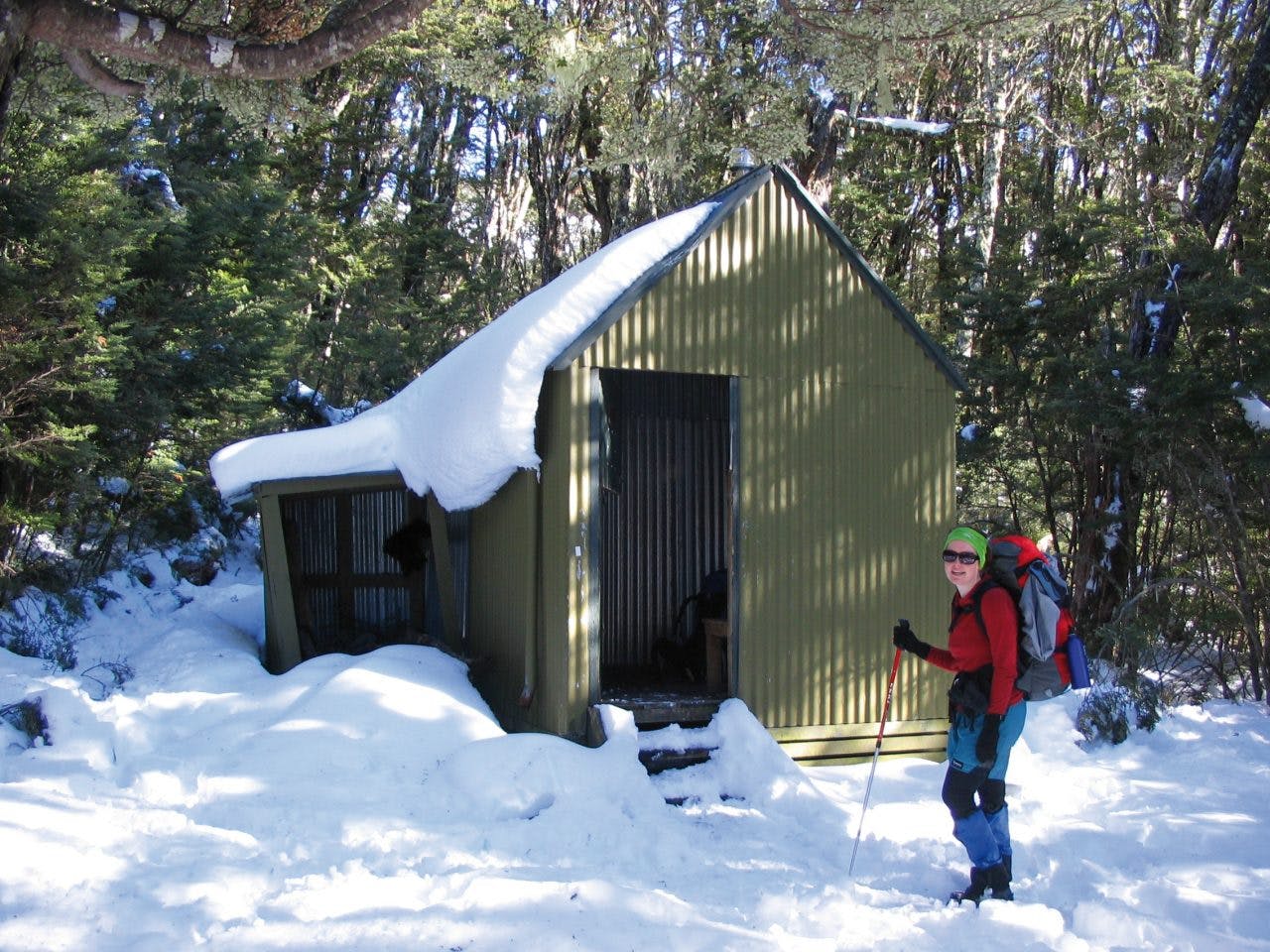 A distant-looking Hamilton Hut was sighted before we again plunged into the beech forest and began the long descent into Hamilton Creek.

After battling our way over, around and under countless snow-laden trees we made it to the valley floor and it was then a short way to the well-appointed Hamilton Hut. Kea cries in the surrounding bush heralded the transition from afternoon to evening and although the view from the veranda was spectacular, the rapidly dropping temperature soon drove us inside. The last of the days’ sun leeched from the sky and was replaced by a brilliantly clear blanket of stars.

The alarm roused us at 6am and after breakfast, wet boots were donned again ready for the day. First glimpses of the weather weren’t promising – clouds obscured the morning sky and a soft sleet was falling. We would be crossing Lagoon Saddle late in the afternoon and bad weather had the potential to make the pass very unpleasant. The decision was made to double back the way we’d come. We left Hamilton Hut under torchlight, retracing our weary steps up the valley.

The old adage ‘what a difference a day makes’ seemed especially applicable to Cass Saddle as we lumbered back onto the pass. Bright sunshine courted us briefly, but approaching the top we were greeted by a vista of purple, bruised-looking clouds to the north and a chill wind attacking us from behind. Silent no more, the gusting wind howled around us and snow flurries made the going difficult. It gave this novice a glimpse of just how hostile and dangerous alpine environments can be. We were all pleased to get back to Cass Hut and rest up a while over lunch.

The weather continued to worsen as we made our descent into Cass Valley and the last few hundred metres to the road end along a farm track seemed never-ending.

Wet, cold and sore, it was a pleasure to shelter inside the old Cass station and get changed before diving into the car and beginning our return to civilisation.