We live in a tamed world where almost every corner of the planet has been explored and mapped. Yet we still seek adventure. I’ve spent my life chasing it, like an addict, and have been lured to jobs where exploration is one of the perks. Recently, I was invited to photograph a three week long expedition exploring canyons across New Zealand’s South Island.

New Zealand’s rugged, mountainous landscape is crisscrossed with rivers and canyons. Some 190 canyons have been recorded with potential for many more discoveries. The country’s geology is complex and each region has vastly different types of canyons – deep ravines usually carved by the abrasive power of water. Most of the classics in the North Island cut through igneous, volcanic rock while in the South Island, the majority are found in metamorphic stone such as schist and marble. Perhaps the best canyoning can be found in the Wanaka area, where the relief is steep and the soft schist has allowed the formation of many canyons. There are numerous recorded routes there and truckloads of potential for more. 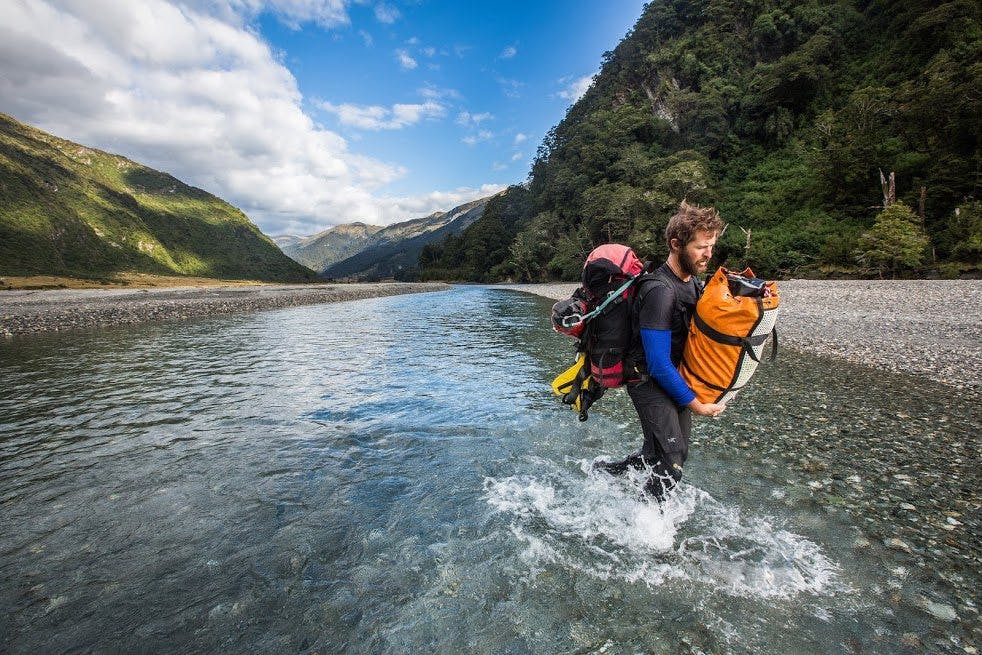 The expedition explored canyons in the Albert Burn near Wanaka. Photo: Neil Silverwood

Like all outdoor pursuits, such as tramping and mountaineering, canyoning will go through a natural evolution. When one sport becomes mainstream explorers find something new – canyoning is just gaining popularity; it’s the next frontier. The sport is perhaps where mountaineering was 100 years ago – there’s only a small body of people involved and there are no formal organisations or clubs. Like mountaineering early in the 1900s, there are more blanks on the map than there are known canyons. I imagine all that will change dramatically in the next 10 years and canyoning could become one of our most popular outdoor pursuits.

When I joined the six-man team, which had been funded by a Sport New Zealand grant, they were gearing up for a trip to the Albert Burn, an isolated area to the west of Lake Wanaka.

“Pack light, and be ready to go by 5am tomorrow,” Richard Bramley, the expedition leader, told me. “We’re flying into the Albert Burn and you’ll be dropped at the top of a brand new canyon,” he added casually. I’d never heard of the Albert Burn and funnily enough had no idea where it was – but I didn’t let on.

The following morning, a Hughes 500 dropped us in a remote area just below the bush line. We started down a creek that flowed through a series of short gorges with some huge slides and jumps before plummeting some 200m almost straight down to the valley floor. Rapelling the final drop was like falling off the edge of the Earth; Albert Burn Hut, which would be our temporary base, was just a small dot below. It was only my first day and I’d already experienced some terrific exploration. We spent the next three days based at the hut and explored and mapped multiple canyons in the valley. 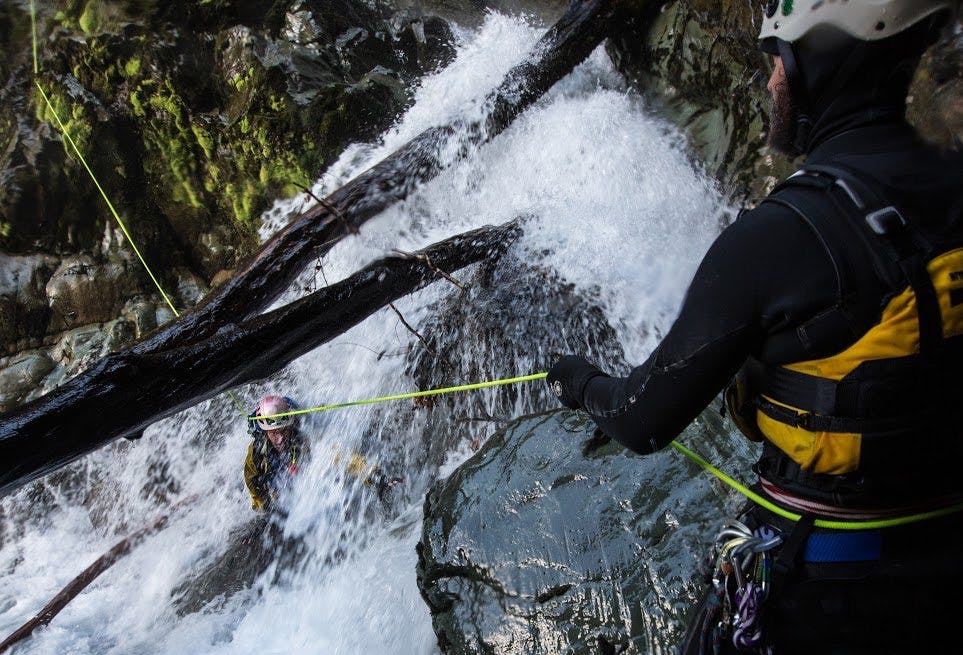 We then headed to Fiordland. The steep country holds hundreds, if not thousands, of canyons and has recently come onto the canyoneer’s radar. We’d had a tip off about a canyon called Swamp Creek from a Wanaka-based canyoneer who had scoped it out and raved about its potential. Our stomachs churned with excitement and nervousness as we studied the stacked contours on the topo map. It would be a challenging prospect, the canyon dropped 365m per kilometre from a basin high above the Hollyford Track and on the Serpentine Range. Add to that challenging topography a high volume of water and it would be difficult, if not impossible to descend.

From our base at Gunns Camp, we bush-bashed into the middle of Swamp Creek, 300m above the Hollyford Valley. I abseiled over the edge to peer into the dark ravine; the scene was intimidating. Below, the creek poured over a series of cascades before disappearing from view. The white water was nearly wall-to-wall and there would be little room to keep out of it. 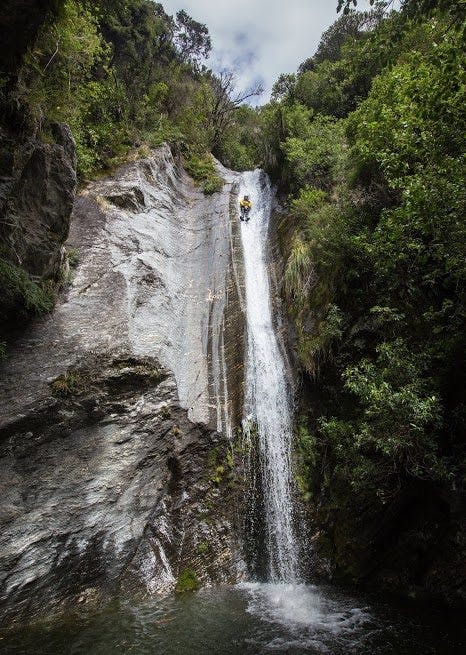 Back at our camp we debated our next move. Two of the team made it clear they felt Swamp Creek was a beast they didn’t want to tackle. Others felt that exploring a canyon like this was what the expedition was all about. I felt daunted by what I had seen, but deep down was dying to take on a real challenge, something that would push the team. We decided to begin the exploration conservatively and put a rope in below our entry point in case we ran into difficulties. The next morning we climbed up the true left of Swamp Creek and dropped into the centre of the chasm.

The exploration of Swamp Creek was overwhelming. Time and again we came across testing hurdles: abseils requiring tricky deviations and spray-lashed pools where waves beat against the sheer rock walls. My camera lens was covered in spray for much of the trip but I managed to get the occasional shot. The camera gave me a focus in the midst of the chaos and took my mind off the situation.

I couldn’t help but feel that this is a place humans shouldn’t tread. I did, however feel incredibly humbled by the environment. Eventually, we reached an obstacle we couldn’t overcome. The river plummeted into a narrow ravine and progress would most likely involve a series of aid climbs on the wall. We’d found our limit and retreated.

Back at base, we discussed the plans for the rest of the expedition. The team was divided on what to do next. In the end they headed to the West Coast while I decided not to continue. The exploration of Swamp Creek was one of those intense experiences that test you in every way. I’d had enough, and my cup felt full.

Looking back, the trip was a success. The team had probed a major new canyon and explored several others as well as collecting data for a new guidebook that is being produced by expedition member Daniel Clearwater. With detailed information on roughly 35 canyons, Clearwater, who also runs the kiwicanyons.org website, says the guide will have a massive impact on the popularity of the sport. “These are some of the most significant canyons, they’re the ones that people are likely to do,” he says. “It’s not a comprehensive guide, it’s meant to be the best of the best.”

Further support for the sport has recently been announced by the Federated Mountain Clubs, which launched a campaign to support and help develop outdoor activities that are on the fringe of its core tramping and climbing constituency. The focus for 2015/16 is canyoning. “Sometimes these activities aren’t as organised, or as well-known as they could be, and we might be able to contribute to developing these opportunities, improving awareness and increasing participation,” said FMC president Robin McNeil when announcing the Celebrating Outdoor Recreation campaign.

New Zealand canyons are also receiving attention from overseas canyoners. In 2013, a French team visited New Zealand and explored multiple canyons in the Haast and Wanaka areas. They tackled Gloomy Gorge, New Zealand’s most difficult canyon explored to date. This high volume monster drains the Maud Francis Glacier near Mt Aspiring. It took the team seven days to explore it section-by-section, but they left the country before they had a chance to complete the first full descent. I can’t help but feel, though, that New Zealanders should be leading the charge when it comes to canyon exploration.

For me, the expedition was special because we got the chance to be explorers, not in the same league as the legendary Charlie Douglas or Thomas Brunner, but we did get the chance to walk through terrain not traversed by humans before. Memories of the trip down Swamp Creek will stay with me for a lifetime.