Ski touring the Tasman Glacier is a must do, writes Joe Harrison

I looked at the massive pile of ski touring gear sitting on the runway at Mt Cook Airport and wondered how it and our group of six would squeeze into the helicopter.

Ski touring is without doubt my favourite sport; it combines the freedom and adventure of tramping with the excitement of mountain biking and all within a wild alpine environment. But if there is a downside, it has to be the amount of gear needed to do it. Even if you pack lightly, your car boot gets filled pretty quickly. Add five other people, and even a helicopter looks like it might not be big enough.

With food box and packs resting on our laps, we managed to stuff ourselves into the chopper and get airborne. Cameras and eyes were soon fixed out the windows as we tried to pick out and name the snow-covered peaks which flanked the sides of the Tasman Glacier. But before we knew it, our $1200 flight was over and we were unloading our gear just below Kelman Hut, our accommodation for the next few days.

For most ski touring Kiwis, visiting the upper Tasman Glacier is a right of passage. Its wild serac fields and golden light peaks have appeared in so many magazines and calendars it feels as if you’ve been there before. Given its large size and the fact it regularly sees guided ski descents, the Tasman can lure you into a false sense of security. The tragic death of an experienced ski tourer just metres from Tasman Saddle Hut a month before our visit was a clear reminder there is no such thing as ‘safe’ or ‘low risk’ in these mountains.

With our gear at Kelman Hut, we skinned up the face beside the hut for a warm-up run. Soon after pointing my skis downwards, I found myself going a little too fast for the sticky sun-cooked powder and turned a little harder than normal to lose speed. Before I knew what was happening, I was spat upside down and rolling down the face, my ski shooting off towards the glacier. “Hope that brake is going to deploy,” I mumbled with snow in my mouth and my ski disappearing out of sight down the glacier. Eventually the ski stopped, a good kilometre away, and was retrieved by Mark and John who then briefly attempted to sell it back to me.

With two skis back on my feet, we set off in search of more turns and better snow. Located a short skin from both Tasman Saddle and Kelman Hut, Mt Aylmer is a good non-technical peak to climb and ski when you only have a few hours to spare. Although the peak is relatively straightforward, its upper south west face is steep enough to require care but is well worth it given the buzz you get from making steep turns high on the Main Divide. After a few more laps on the shoulder of Mt Aylmer, the sun had all but left our alpine playground so we pointed our skis towards the hut. 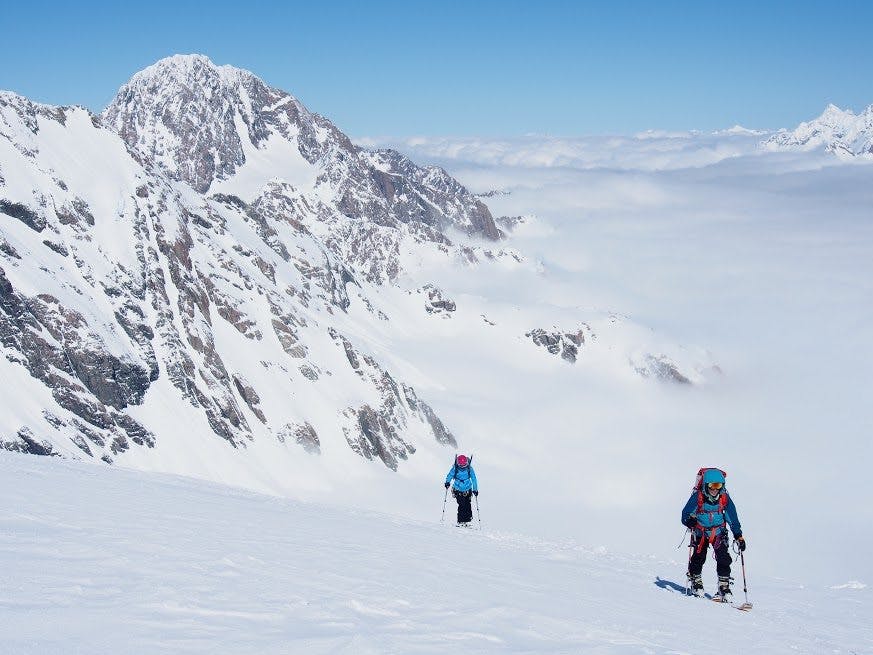 One upside of flying into an alpine hut is you can take plenty of food that would otherwise be too heavy to carry in on foot. I had been left in charge of organising the food for our stay and hadn’t wanted our touring gang going hungry. Big meals were the order of the day and often included two courses. Breakfast regularly involved pancakes, bacon and fresh coffee.

Kelman is a spacious hut with a kitchen area large enough to feed a school camp and with 22 bunks. It’s a nice place to return to after a day of touring with a large group.

The next day, we broke into two groups and set off for different objectives. For Benie, Renee and I, this was Hochstetter Dome – a large roundish slab of ice between Mts Aylmer and Elie De Beaumont, which was Mark, John and Nick’s goal for the day.

When it comes to Main Divide peaks, Hochstetter Dome is the odd one out. While most peaks on the Divide are steep, rocky and jagged, Hochstetter is a fat blob of snow and ice. This makes it a great peak for ski tourers because if you pick your ascent line right, you can skin right to the summit without taking your skis off.

The touring-friendly terrain and 15cm of powder meant our skin up was pretty relaxed. The view at the summit was stunning and included the peaks of the Southern Alps marching off to the east through a waterless sea of rock and snow. The contrast to the western view, filled with rolling green forest and steep river gorges, could not have been more stark.

The warmth generated on the way up was soon gone so we pulled off our skins and adjusted our bindings to ‘ski’ mode. The descent was far from extreme but still enjoyable. It’s extremely satisfying skiing a peak you have climbed. When you combine that feeling with a bluebird day in the mountains it’s pretty hard not to crack a smile.

We made our way to the Ann Glacier to catch up with the others for lunch. They had been unable to cross the large bergschrund cutting off access to Elie De Beaumont and had been forced to turn around.

After lunch we decided to take them on another lap on Hochstetter Dome. Typical of the weather in these parts, we had no sooner pulled off our skins and were preparing for the descent when a fog rolled up the valley and visibility dropped to 30m.

This spiced up the descent though and we skied by feel and hoped we didn’t end up cut off by a crevasse field.We all found our way through the grey fog to our old skin tracks and were soon laughing at the whole idea of skiing blindly down a crevasse-ridden mountain.

The fog was still hanging around the following morning so we slept in and attempted to chip away at our huge food stash. Full from their third breakfast, John and Nick braved the weather and went to ski a couloir on Mt Annan. By midday, the sun had started to break through the fog so the rest of us chucked on our harnesses and boots, grabbed our skis and headed to Mt Aylmer for some afternoon laps.

That night news came in on the mountain radio that a storm was on its way. Though we didn’t want to leave, we knew we might not get a clear day to fly out for some time. The next morning we loaded our packs and aimed our skis down the Tasman to our pick-up point at Darwin Corner, where the Darwin Glacier meets the Tasman. The skiing was pretty tame for most of the descent, but with a heavy pack on my back that was more a blessing than a reason for complaint.

I was happy just taking it easy and making turns beneath the 3000m peaks on New Zealand’s biggest chunk of ice and snow.

Not bad at all really.