Our arrival at the remote wilderness camp is timed for early evening, allowing just enough time to race down to Lake Pehoé’s silent shore and see a mountain view that is out of this world.

I stand transfixed at the monumental sight, a full panorama of the Torres del Paine National Park rising up into the darkening sky and reflected faithfully in the smooth ivory surface of the lake. The Grande Paine dominates the left flank. The sharp angular twin Cuernos (Horns) straddle the centre and the three Torres del Paine (Towers) are partially obscured in the rear.

The craggy peaks are incredibly diverse in their sculptured forms. I could well be observing a fantasia kingdom conceived and created by the Weta Workshops movie set designers. The horns and towers appear to have the surreal shapes of cathedrals, fortresses, masks and swords chiselled into the granite and sedimentary rock by some unseen giant hand.

Our local guide, Claudio, joins me as a dusting of gossamer-light snow flakes begin to fall on our camp. Pointing skywards he says: “Those birds are Andean condors.” I see two large black and white birds turning in lazy circles over the lake, silhouetted against the pale sky.

‘Condors had an important role in our ancient mythology in Patagonia,” Claudio continues as we stroll back to our little enclave of blue canvas tents, where our tour guide, Gaetano, is preparing a barbecue. “They were aligned with the sun god and were believed to be rulers of the upper world.” 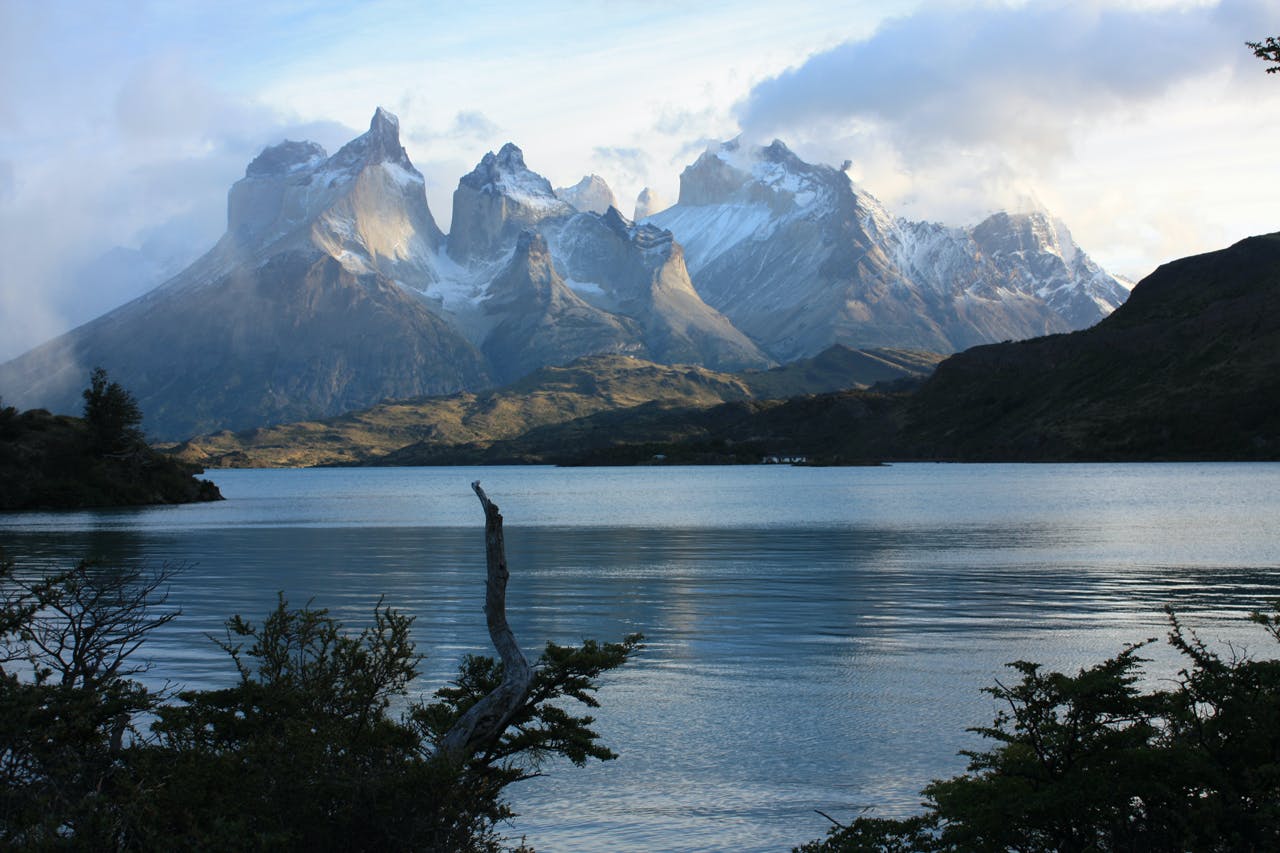 Gaetano, a Spanish-speaking Italian from Naples, has brought our small group of adventurers to this camp in a big green overland touring truck called ‘Esperanza’, meaning hope. We are on a Southern Explorer tour with New Zealand adventure company Viva Expeditions.

Our group includes Richard and Grace, who like to alternate their annual holidays. This is an adventure trip for Richard who carries a 12kg backpack full of photographic gear. The next holiday will be on a tropical beach resort to be chosen by Grace.

Andrew and Elaine are nearing the end of a 100 day gap year trip through Australia, New Zealand, Argentina and Chile. They found this tour on the Internet and are well informed about the route. Mike, a solo traveller, does an adventure trip each year and shares an interest in photography with Richard.

Night falls on our lakeside campsite, which is called Area de Acampar Lago Pehoé. I crawl under four heavy blankets on a camp stretcher wearing several layers of polypropylene. A cool wind blowing across the lake keeps the temperature just a smidgen above freezing point.

Dawn brings the much brighter prospect of clearing skies. The Paine massif is now tinged in pale pink on its eastern flank as the sun rises. I scan the skies for my two condors and find them soaring on the updrafts and steady winds coming off the mountain.

They appear even larger in the daylight, with outstretched wings measuring three metres. Claudio tells me that we will see other birds of prey in the park like black buzzard eagles, falcons, kestrels and crested caracaras, but none can match the sheer majesty, grace and effortless flight of the condor.

Today we begin our mission to walk the three trails that make up the classic ‘W’ route through the Torres del Paine. A ferry boat carries us across Lake Pehoé to a grand lodge by the name of Refugio Paine Grande.

This will be our base for two days while we trek to Glacier Grey and the French Valley. The third leg of the ‘W’ requires us to return to our camp for one night and then drive to Hotel Las Torres for the climax, a trek up the Ascension Valley to the three great Torres del Paine.

Claudio has the laid-back, laissez faire Latin-American approach to life but is very earnest about his role in shepherding our little party over these mountain trails. Surprisingly he is quite blasé about reading weather forecasts. His philosophy is quite simple really. Each morning he looks up at the sky and makes an instant judgement, saying: “The one sure thing about Patagonia weather is that it’s unpredictable.”

Our trek to Glacier Grey is under dark skies and a steady drizzle. We set off on a winding trail beside the long, sinuous Lake Grey, where large pale turquoise icebergs drift languidly across the lake. Scrambling over moraine rock piles we gain a misty view of the great white snout of the glacier. It’s a jaw-dropping sight. We retrace our steps as the weather clears and spend a pleasant night in the Refugio. 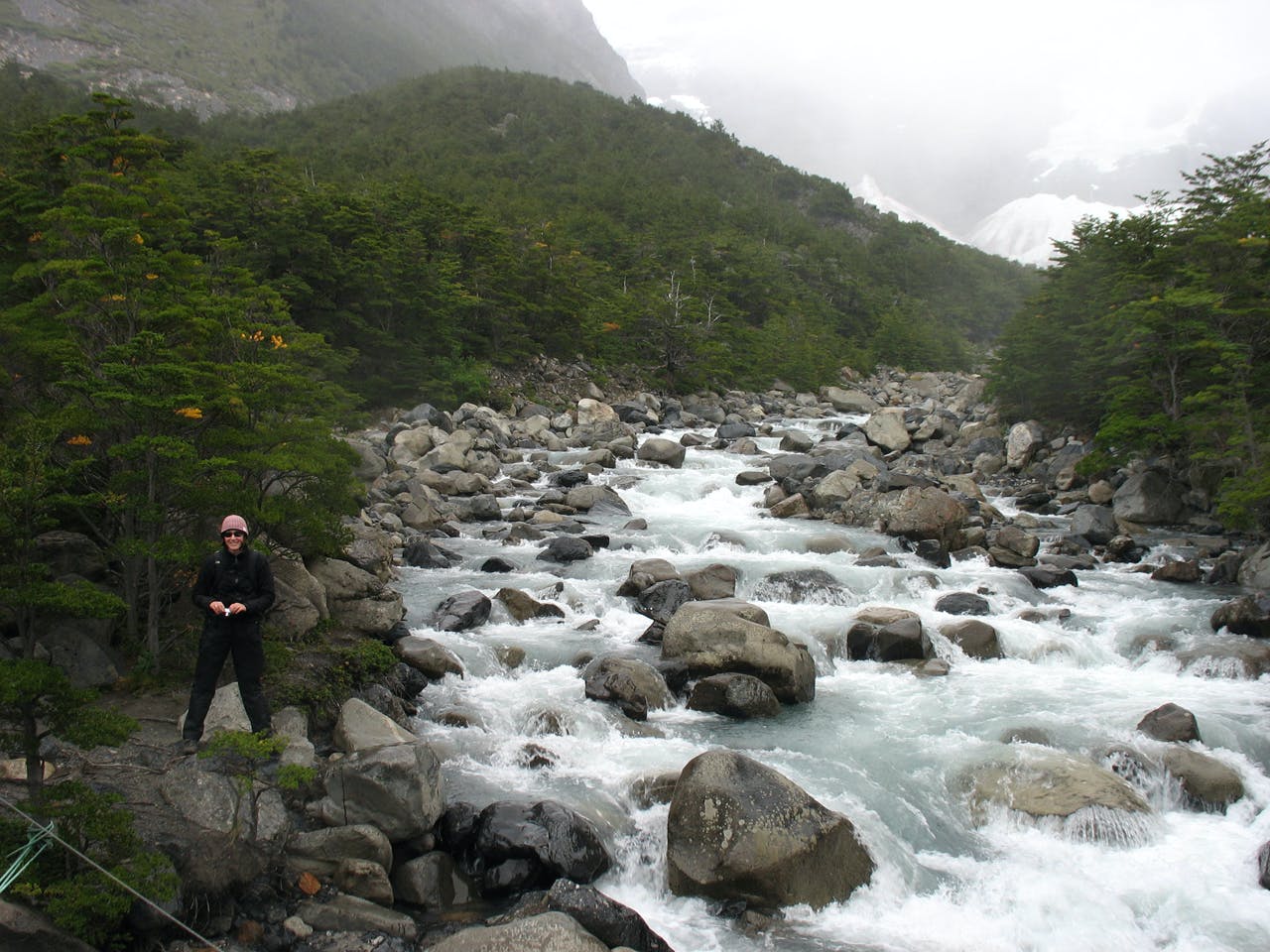 Guarding the entrance to the valley is the Cuernos del Paine, a group of incredibly sharp-edged towers capped with black-topped peaks. Today they are shrouded in a mantle of brooding mists. As we trek through the open beech forest we catch glimpses of hanging glaciers, cascading waterfalls, milky blue lakes and bubbling streams. This is surely the most beautiful valley in the park.

Our evening meal is hearty fare, enjoyed in the comfort of the Lake Pehoé Camp restaurant, as a million needle-sharp stars hover over the ghostly silhouette of the Paine massif. The horn-like, fluted peaks of the Cuernos del Paine are etched against the sky.

The raw beauty and symmetry of the mountains is a fine accompaniment to a great meal – think Italian cuisine coupled with premium Argentine eye-filet. Of course, then there’s the coffee with hot milk, the ubiquitous Café con leche. Not to mention the compulsory pisca sour cocktail. Gaetano has brought out his maté bowl. Maté is an herbal infusion similar to tea leaves, which acts as a stimulant. It’s de rigueur whenever Argentineans get together to socialise. This is going to be a memorable evening.

Our final trek is enjoyed under intermittent sunshine in another exquisite valley with sweeping views and an undulating trail beside a joyfully dancing river – the Rio Ascencio. It’s a three hour climb and sidle to Camp Torres and a final one hour uphill scramble to the base of the three towers.

At close quarters, the Torres del Paine are absolutely astounding in the sense of being sublimely unreal and other-worldly. I stand for a long period, rooted to the spot, quite incredulous as to how three magma plugs could be thrust up through the earth’s crust by tectonic forces in such a perfectly uniform lineal form.

The event happened 12 million years ago and erosion has shaped them into three tapering granite towers that belong to some other ethereal universe like Narnia or Middle Earth. Their alignment makes them look like worn teeth in a dinosaur jaw.

There’s no doubt that I’ve witnessed one of the planet’s most stunning geographical features. Torres del Paine is translated as ‘blue towers’ originating from the first sightings of the massif, which can appear blue when viewed from a distance.

The fact that the wondrous Torres del Paine are here and accessible to anyone with reasonable fitness is something to be celebrated. And, as I’ve learned from this visit, the way to celebrate in Patagonia is to bring out the maté bowl and the pisco sour cocktail.

– Paul Rush travelled to Patagonia with assistance from Adventure World and Viva Expeditions.

Getting there LAN Airlines fly from Auckland to Santiago. Domestic flights connect Punta Arenas and overland transport takes you to Puerto Natales, the gateway town for Torres Del Paine.

When to go The best times to visit are Oct/Nov and Mar/April when temperatures are slightly cooler than the summer peak but the crowds are less intimidating.

Tour Companies Adventure World (www.adventureworld.co.nz) is an Auckland-based adventure travel specialist. They offer a range of tailor-made tour packages to destinations all over the world.