Access
Purnululu National Park is 304km from Kununurra by road. The entry road is suitable for high-clearance 4WD vehicles only. Check the weather forecast and road conditions with park authorities before entering the park.

Horror stories rarely live up to their hype and the road into Purnululu National Park, in the Kimberley, is not the monster which park notes and friends’ tales had steeled us for.

That’s not to say the road is never a beast or that the 53km drive in from the Great Northern Highway can’t take three-hours, or longer, but it is not as rocky as we expected, has fewer blind corners and drop offs, and only one stretch of sand, and the journey from bitumen to park ranger station takes us just 80 minutes.

The drive is also more spectacular than we imagined, looping around and through ranges lain like rough-hide reptiles on the cattle stations it traverses.

It’s unusually hot for August in far north-west Australia and moisture-sucking air engulfs us when Simon and I step from our hired 4WD at the visitor centre. The on-duty ranger pooh-poohs our plans for an afternoon walk, recommending instead that we rest for the remainder of the day and walk next morning. We won’t be exploring Piccaninny Gorge either, because just getting to the main gorge involves a 7km walk along an exposed – which means hot! – stony creek bed!

Doing as we have been told, we drive north on a good road to Kurrajong campsite and spend the afternoon reading on inflatable mattresses which we shift every half-hour or so to keep in the strip of shade cast by a scruffy tree.

When the sun retracts its sting, we pitch our tent and then head for the serrated karst ridge behind camp. As the sun sets behind us, we watch the Bungle Bungle Range in front change from orange to red to burgundy to purple, toasting the spectacle with gin and tonics literally ‘on the rocks’.

Having gone to bed soon after dark and got up with the sun, we breakfast in the shade of a red-rock wall in the Mini Palms Gorge car park, 12km north of camp.

The 5km Mini Palms Walk takes us up a dry, stony creek bed into one of the countless gorges which water and time have cut into the Bungle Bungle Range. The air is cooler in these rents and plant life different; at Mini Palms, Livistona fan palms grow to remarkable heights and blue sky silhouettes top-knots of Rastafarian fronds.

After narrowing to just metres wide, Mini Palms Gorge opens out again and almost encircles us with red rock. Signs describe the formation of conglomerate rock, which is everywhere; layering is on show too.

Continuing up the gorge involves walking and squeezing past fallen boulders, an effort that brings us to the two elevated viewing platforms where we meet an English mum, dad, and daughter on their first trip to Australia. Rather that visit Sydney or Brisbane, they have hired a camper van and are driving from Perth to Darwin. I silently cheer their decision!

They also spent a night about 300km south of Purnululu at Wolf Creek Meteorite Crater, the second biggest crater in the world, and felt uneasy when headlights swept in at about 11pm – and they haven’t even seen the Australian horror movie Wolf Creek released in 2005! 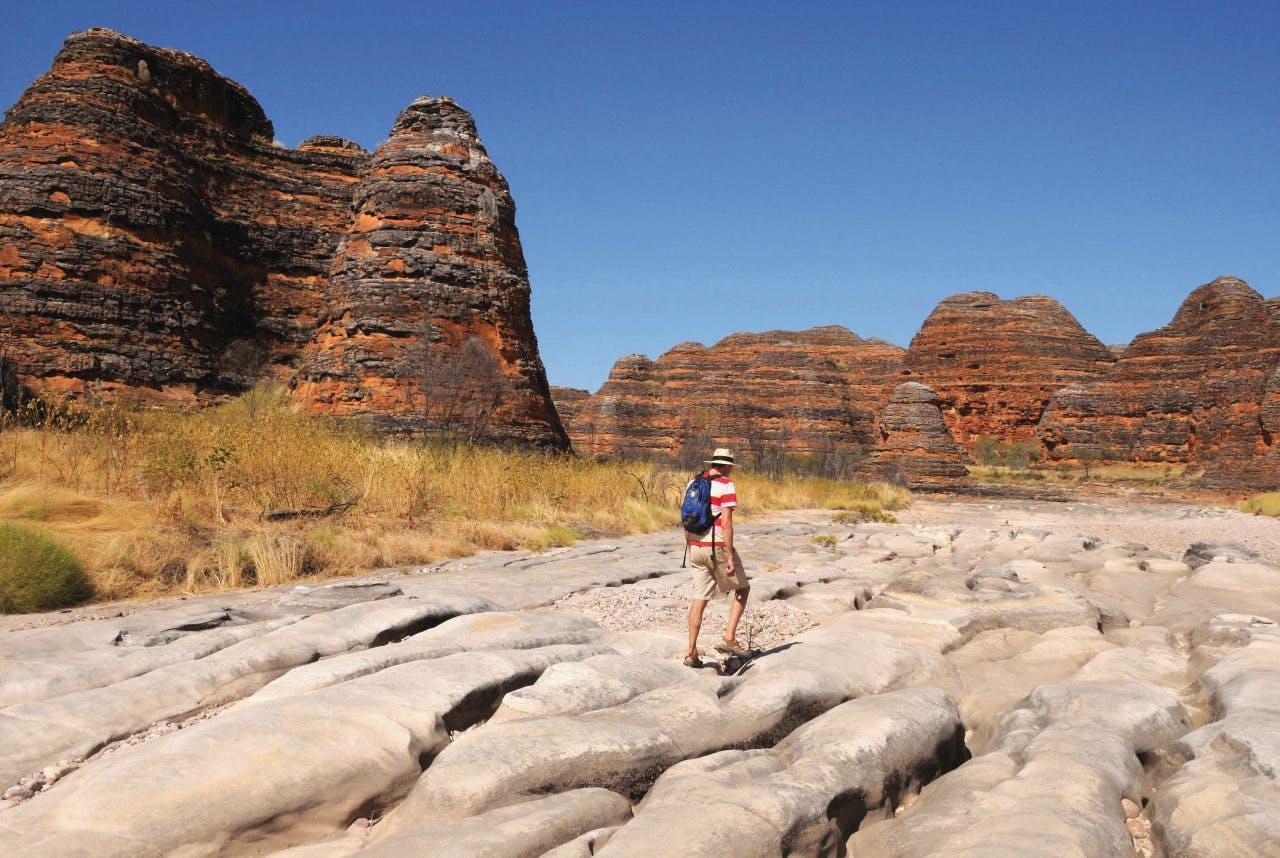 Half an hour later we step from relatively cool gorge shadows into building heat that makes walking back to our air-conditioned vehicle thirsty work. We make a refreshing cuppa in the Echidna Chasm car park, a further kilometre north.

Like Mini Palms, we enter Echidna Chasm via a dry creek bed, but this gorge becomes considerably narrower considerably quicker, forming a corridor whose sculpted walls are only millimetres from our fingers and whose roof is a sliver of blue. As far up the chasm as you can go without donning Spiderman suits and climbing, we stop and wait.

Light creeps down the sandstone walls as midday approaches, warming the innermost chamber, but the sun’s passage produces more spectacular effects back down the chasm, where sculpted stone glows orange, as if lit from within. The combination of curves and planes, textures and hues is downright sexy.

The symbol of Purnululu is a cluster of beehive domes but these remarkable cone karst formations are fragile, so much of the park is closed to visitors. You can, though, appreciate the astonishing geology from a helicopter. Half-hour scenic flights cost A$295 but the money is well spent – and the adrenaline rush from flying without doors is free.

Uplifted, cracked and eroded over millions of years, the Bungle Bungle Range, which covers about a quarter of the 240,000ha park, is a maze of gargantuan domes, here joined like clay figures, there incised with gorges, some open only to a few Aboriginal elders. (The park is jointly managed by the Western Australian Department of Environment and Conservation and Kimberley Aboriginal people, whose Dreaming includes stories about these ancient rocks.)

We overfly Red Gorge, U-Gorge, and Lightning Gorge, so named because lightning sheared off a patch of its red ‘skin’, leaving a whitish sandstone ‘scar’ on one wall. We fly the length of Piccaninny Gorge, which experienced hikers tread on multi-day hikes. And looping back along the main range we pass separate clusters of smaller domes.

Purnululu was a cattle station before being gazetted into a national park in 1987 (it was World Heritage-listed in 2003), and staff would block the narrower break in the Amphitheatre dome cluster and drive cattle into this natural corral through a wider gap.

Purnululu’s helipad-airstrip is in the park’s south, about 5km from Walardi Campsite, where we spend our second night. Walardi is an excellent bird-watching destination; run a tap and birds flock in for a drink, lying water being a rare treat this time of year. 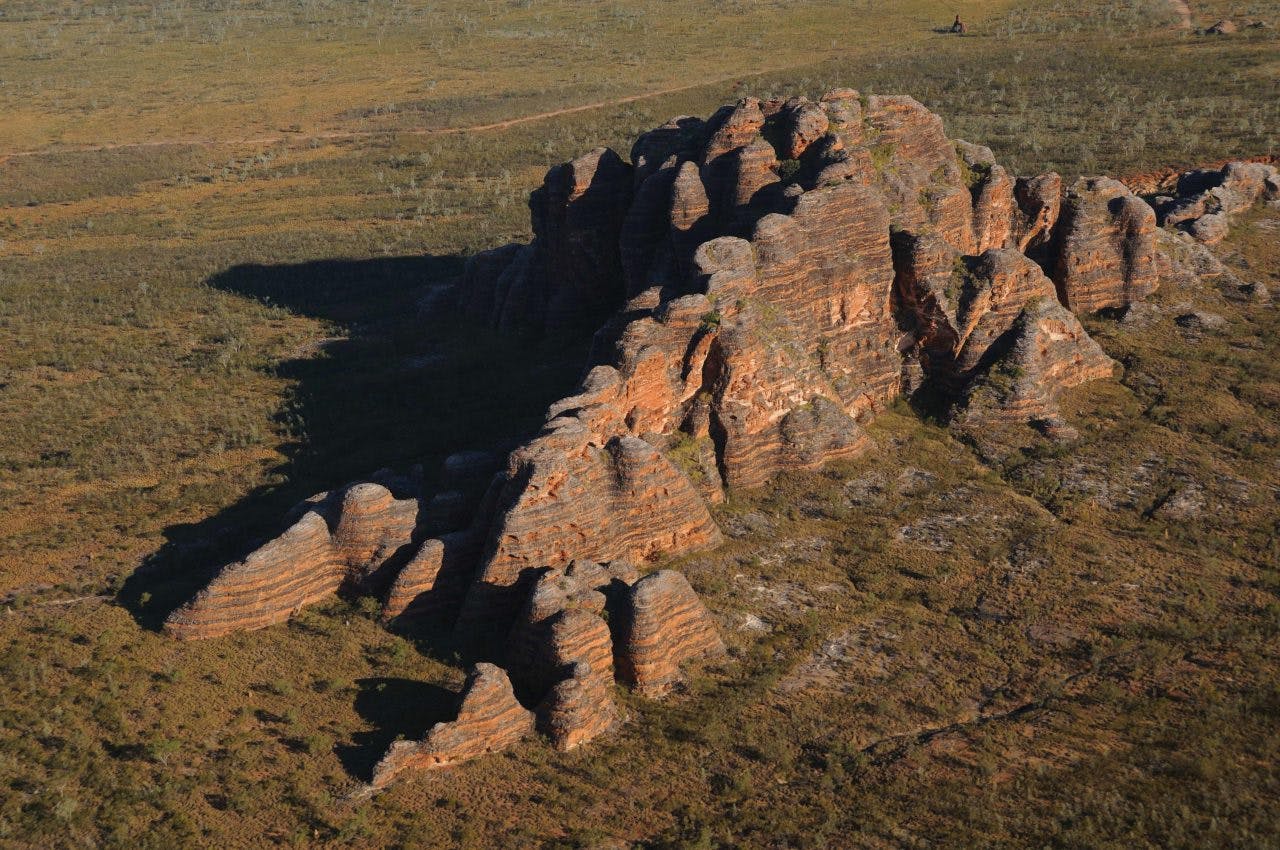 Peaceful doves, double barred finches, and glossy black mistletoe birds with flashy red breasts, entertain us as we while away the pre-flight hours. After our helicopter ride we watch corellas wheel and chatter as they settle for the night in the eucalypts along (dry) Bellburn Creek.

The dusk air is a balm after the day’s heat, the bug-and-beetle chorus that follows sunset suggesting a rowdy celebration of the respite. Having again slept with only insect mesh between us and the stars, we rise with the sun and are on our way before it starts packing punches.

Today is our last in Purnululu so we drive the 15km around the range’s southern tip to Piccaninny Creek car park.

An easy 1km loop walk from here puts you among domes so close you could touch – but we don’t – the individual sedimentary layers and the protective cyanobacteria that give the beehives their distinctive black and orange banding.

The trickling waterfall here could be an altar and the domes and sky through the entranceway look like a stained glass window, so a respectful murmur seems the appropriate volume; other visitors, however, do not feel the same.

From the Cathedral’s atmospheric shadows we step back into Kimberley sun and follow the track signs past flamboyant enamel-red Sturt’s Desert peas and a pair of rainbow bee-eaters to Piccaninny Creek Lookout, for an aerial view of the plains through which the creek snakes south.

This walk takes us about 250m up Piccaninny Creek on a crazy pavement of pink-grey sandstone furrowed by time and water that reflects the sun back up at us. We have no doubt now that trekking up Piccaninny Gorge into the very heart of Purnululu National Park is an adventure best left for a return visit.