Accom.
The campsites at the beginning and end of the trail cost AUD$15 each per night. Trail campsites are AUD$3.50pp. Booking at least two months in advance is essential, www.nationaltrail.com.au

Access
Via ferry crossing from Nitmiluk National Park headquarters, 39km from Katherine. The trail can only be done in one direction and numbers are limited to 10 each day

There’s nothing like a croc trap on the side of a river to convince you not to wade to the other side.

It was hour one, of day one of the Jatbula Trail in Australia’s Northern Territory. Despite wanting to get tramping before it got hot, we waited for the 9.30am Katherine Gorge ferry crossing, which takes all of one minute.

The Jatbula trail is an ancient aboriginal route that follows the Jawoyn people’s water holes, spiritual sites, rock shelters and hunting grounds. The trail has been used by indigenous people for tens of thousands of years. In 1989 it was opened to trampers.

When the email had come from my Australian friend that our biennial ‘adventure’ was going to be a tramp in the outback, I hesitated, concerned not about crocs, snakes or spiders, but the unrelenting sun and heat.

Fortunately, feelings of impending doom disappeared as we hit the trail on our first morning. The first day’s walk is an easy-peasy 8km, just the thing for a Kiwi two days out of a New Zealand winter. What’s more, it was under an escarpment, which sheltered us from the sun. Even so, within minutes I was sweating profusely in the 33°C heat.

It was my first time doing more than a day walk in Australia, being under the misleading impression that I was allergic to tramping in extreme heat.

The heat in July for the record, sat around 33°C in the heat of the day – which is not much worse than a hot summer’s day in New Zealand. The difference for trampers is that we’re used to tree cover. Australian bush on the other hand offers little protection from the sun.

One of the biggest surprises hit me almost immediately. That was the changing geology and flora. From a car, the outback appears monotonous. On foot, it’s an entirely different prospect.

Although the most prominent plant is eucalypts, every kilometre or so we found ourselves surrounded by something altogether different such as golden wattle or grevillea. The first time we noticed this it was in a glade covered in bush passion fruit and Kakadu plum.

Even the rocks were varied. It’s escarpment country with the rock formed by 2.5 million years of volcanic eruptions and sea sediment. The overwhelming colour was a reddish-orange. The most impressive sections were those where the rock was dotted with abundant quantities of quartz ranging from perfectly round almost polished stones, to crystal-like jagged rocks and quartz embedded in the bedrock.

The spectacular landforms of the Nitmiluk National Park are interspersed with an awful lot of water. The area has provided abundant food for the Jawoyn people who have inhabited the area for thousands of years.

Every aspect of this tramp was a lesson in how Australian hiking differed from New Zealand tramping. This, the equivalent of a New Zealand Great Walk had no huts, no taps or water tanks, and until recently no toilets. Just flat areas to camp. The Biddlecombe Cascades campsite, the first we arrived at, had a few largish rocks to sit on, a yet-to-be-opened state of the art composting toilet, but no other mod cons. Discovering that I’d left my tent pole (AKA walking stick) on the ferry, I decided simply to string the bug bag inner of my tent to a tree. 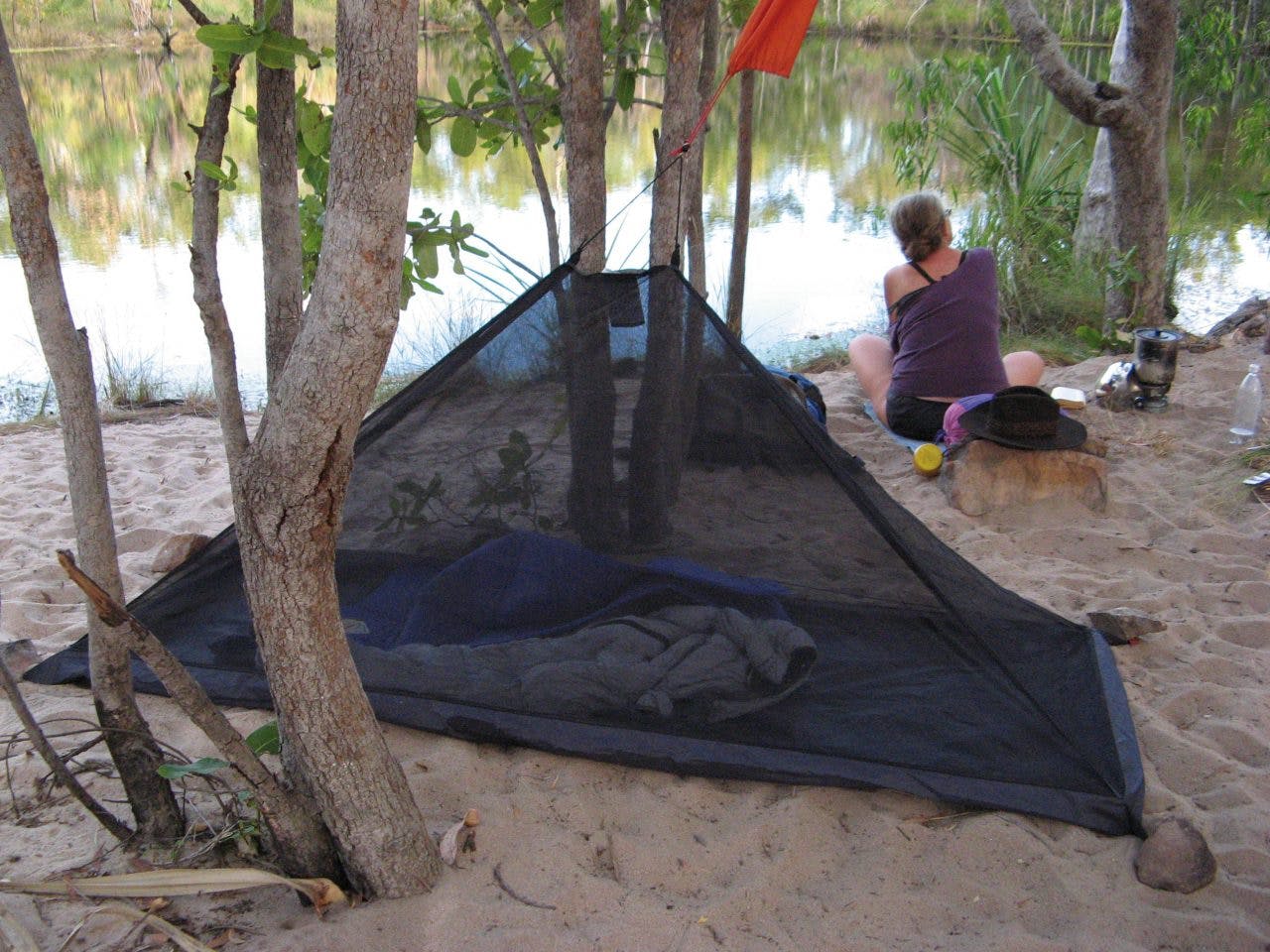 That led to lesson two, which was how much was necessary to carry. When it comes to gear, the hot dry conditions meant our backpacks were much lighter than they would be in New Zealand.

I took one t-shirt and pair of shorts, which were rinsed and dried overnight – simply wearing a swimsuit until bedtime. I didn’t carry wet weather gear and only once donned my thin merino jumper, hat and gloves at night. Likewise the fly sheet of my Luxe Mini Peak II tent came out just once. Two of the Australians on the trail went one step further and slept out. Personally. I didn’t relish the idea of a snake cuddling up to get warm, as they’ve been known to do when encountering a sleeping bag.

My sleeping bag was a two-season down bag. Only one of the eight women on the trail at the same time as us, a water quality officer by profession, purified the water. Most of the campsites have brand new composting toilets, but it’s still essential to carry a tool for burying waste.

It may be hot, but we were glad of our sturdy leather boots as the track is rocky in many places and we didn’t want to be choppered out as one member of the other party was on the third day. For the record, there are four emergency contact devices along the route that can be used to call rangers for help. If you’re alone, you’re required to carry a satellite phone, though at one point, to everyone’s surprise, two days from civilisation one of the Australian tramper’s cell phones went off.

The trail follows the top of the escarpment for the first three days, with stunning views of uninhabited bush and river valleys below. One of the other great diversions is the wildlife. At times we encountered thousands of noisy little frogs in tiny pools that dot what was a stream in the wet season. We stopped for morning tea at a large rocky outcrop, which turned out to be home to the third diversion: aboriginal rock paintings. It’s not marked on the map, but is the first large orange/red rocky outcrop you encounter.

The Australians on the trail stopped off, but had seen plenty of rock art before. Better Jawoyn rock art is found the following day in the section from Crystal Falls to 17 Mile Falls. Conveniently placed for an early lunch, the ‘Amphitheatre’ is housed under the cliffs beside a wet-season waterfall and has a number of rock paintings of animals and people accessed by a metal staircase.

Down in the Amphitheatre we encountered a pocket of rainforest, quite different to the dry grassy/rocky environment we’d been tramping through. 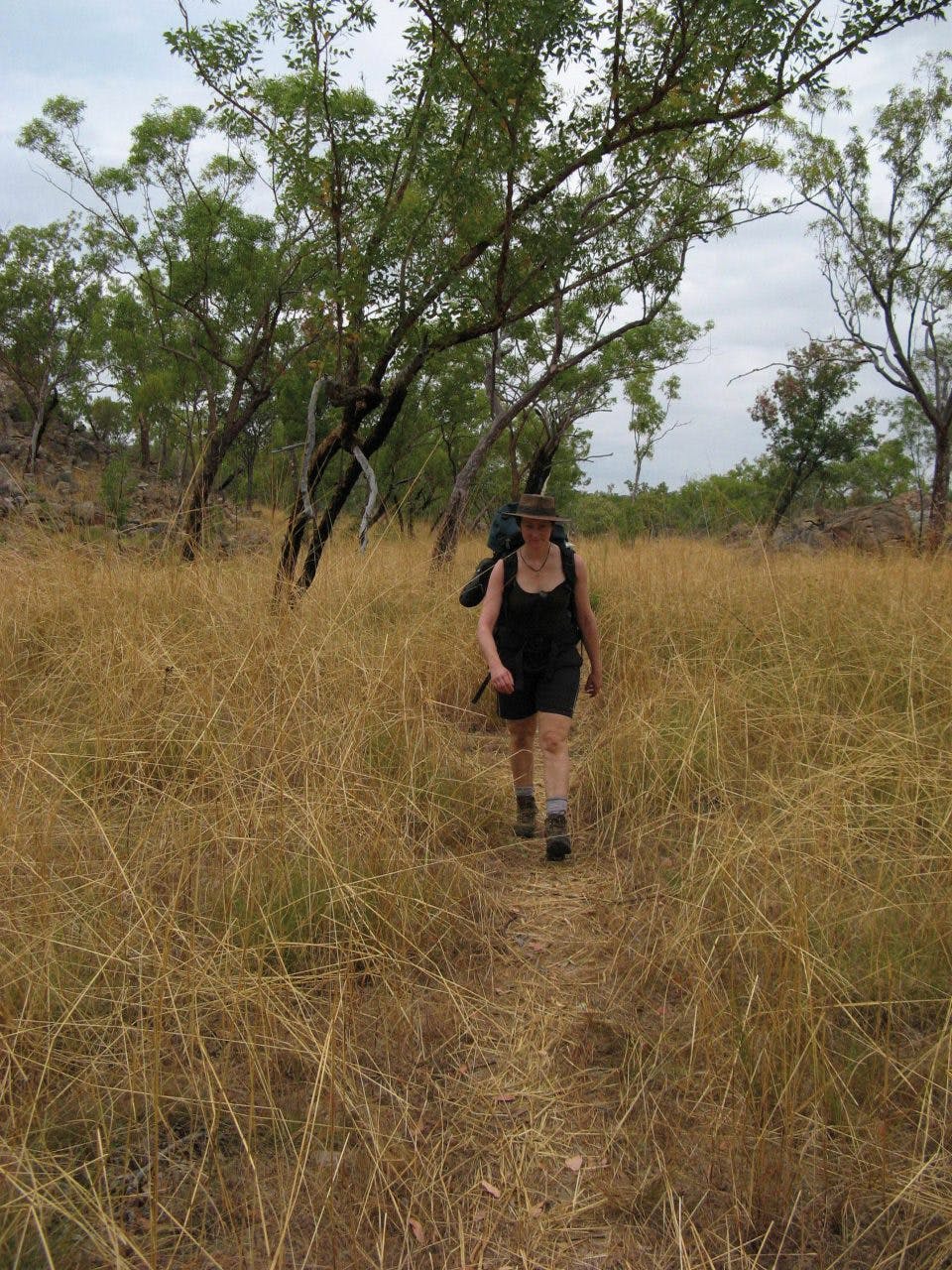 Many of the days’ tramps could have been done by lunchtime if we’d been in a hurry. But knowing the tramping would be relatively easy – though the sun took its toll – we took the time to check out everything from termite mounds, to mouse spider holes, orange trunked Eucalypts with variegated bark, the skeletons of trees burnt during the annual fires, and the many different coloured ants about their daily work.

The Northern Territory boasts almost half of all bird species found in Australia. The trail, marks the divide between the monsoonal north and the arid red centre, which means you can encounter species from both ecosystems. It’s essential, therefore, to take a field guide to help identify them all. Over six days we saw many birds including blue-winged kookaburra, white collared kingfisher, bush curlew, friar birds, black and sulphur crested cockatoos, rainbow bee eaters, rosellas, silver-crowned friarbird, crows (of the opportunistic variety – that hung around campsites), and many more.

Our most memorable avian encounter wasn’t with a bird itself, but a bower bird’s ‘bower’ about 30m from the track. The male of the species builds a bower, or love nest, to attract females. Our bower bird had clearly hunted high and low for white objects to decorate his boudoir, including small stones, a snail shell, and unusually, a spent cartridge casing.

I was pleased to have a real walking talking Territorian with me so I could leach her brain for all sorts of local knowledge – including what was edible and what wasn’t.

From time to time the conversation turned to what the indigenous people had eaten before Europeans arrived and we took to experimenting. The only real success was the water lily leaves, stems and bulbs from the water hole at Sandy River camp, which we chopped up and added to our Nasi Goreng. They tasted a little like celery.

Whilst the first three days are spent on the escarpment, the fourth marks the start of markedly different country. That’s because by mid morning we’d dropped off the plateau to the Edith River Valley, with a corresponding rise in temperature. The change in altitude and ecosystem wasn’t obvious at first until we started spotting Pandanus spiralus, which likes wet roots and has nuts that smell like rotting pineapple, and melaleuca or paper bark trees. The compensation is that there’s sandy soil underfoot, at least until Sandy Camp where it gets rockier.

The latter section of the trail follows the Edith River as it drops down, providing many more opportunities for swimming or filling water bottles. One of the best swimming holes is at the Sandy Camp pool, where a resident cormorant watched us.

From the pool it’s possible to tramp all the way out to the ‘civilization’ of the Edith Falls camp. But we were in no hurry and spent a final night under the stars at Sweetwater Pool and then ambled out in the morning, stopping at Long Hole and the upper Edith River Falls for a swim before heading to the campground where we’d left the Ute, and a celebratory bottle of wine, five days earlier.