Ah, winter! The perfect excuse to put your feet up.

For the next couple of months tramping is for the diehards. It’s about carrying axes and attaching spikes to your shoes. It’s about icicles hanging from your eyebrows and your pee freezing solid before it hits the ground.

You need specialist skills and experience to match. Or do you?

Sure this country has mountains to push anyone’s technical and physical limits, but you don’t have to hit the snow line for a true adventure and a feeling of absolute solitude.

In fact, you could argue that low level hiking in winter is even better than in summer.

Look at the plusses:

And – a point not to be understated –

Wherever you are in the country, you can find great crampon-free routes.  We’ve chosen four examples to try this winter. All provide at least one good day’s tramping which, barring freak storms, should keep you largely free from the white stuff.

Starting at some of the most rugged and dramatic coastline north of Kaikoura, this route heads away from the ocean, among hills of native forest, before dropping back down to shore several kilometres further south.

Elevated views of both Okiwi and Half Moon bays feature towards the beginning and end, while the middle of the tramp offers glimpses of the vast Pacific Ocean and snow-capped mountains further inland.

Navigation is easy – the route follows a well defined 4WD track throughout. There are three opportunities to head off course to nearby summits and it’s certainly worth adding extra time to do so.

From Okiwi Bay car park the track climbs continuously, but for one drop where you ignore the route heading right to Patutu summit. Eventually you reach a saddle, where you can take the 40-minute return trip to Pacific Lookout. The track then crosses several small streams before zigzagging up to the next saddle. After the fence, a grass path leads up to the summit. But the route heads right along the more prominent track, down the right flank of the hill to Ohau Stream, before winding back uphill to a third saddle – and the third opportunity to head left or right to enjoy fine views from these nearby summits.

The track straight ahead drops once more. Turn left at the sign pointing to Half Moon Bay and enjoy the relaxing slow descent, high above the Rakautara Stream, with the Pacific Ocean in the distance.

The first sign of civilisation could be the deep rumble of a train travelling through the tunnel beneath your feet. 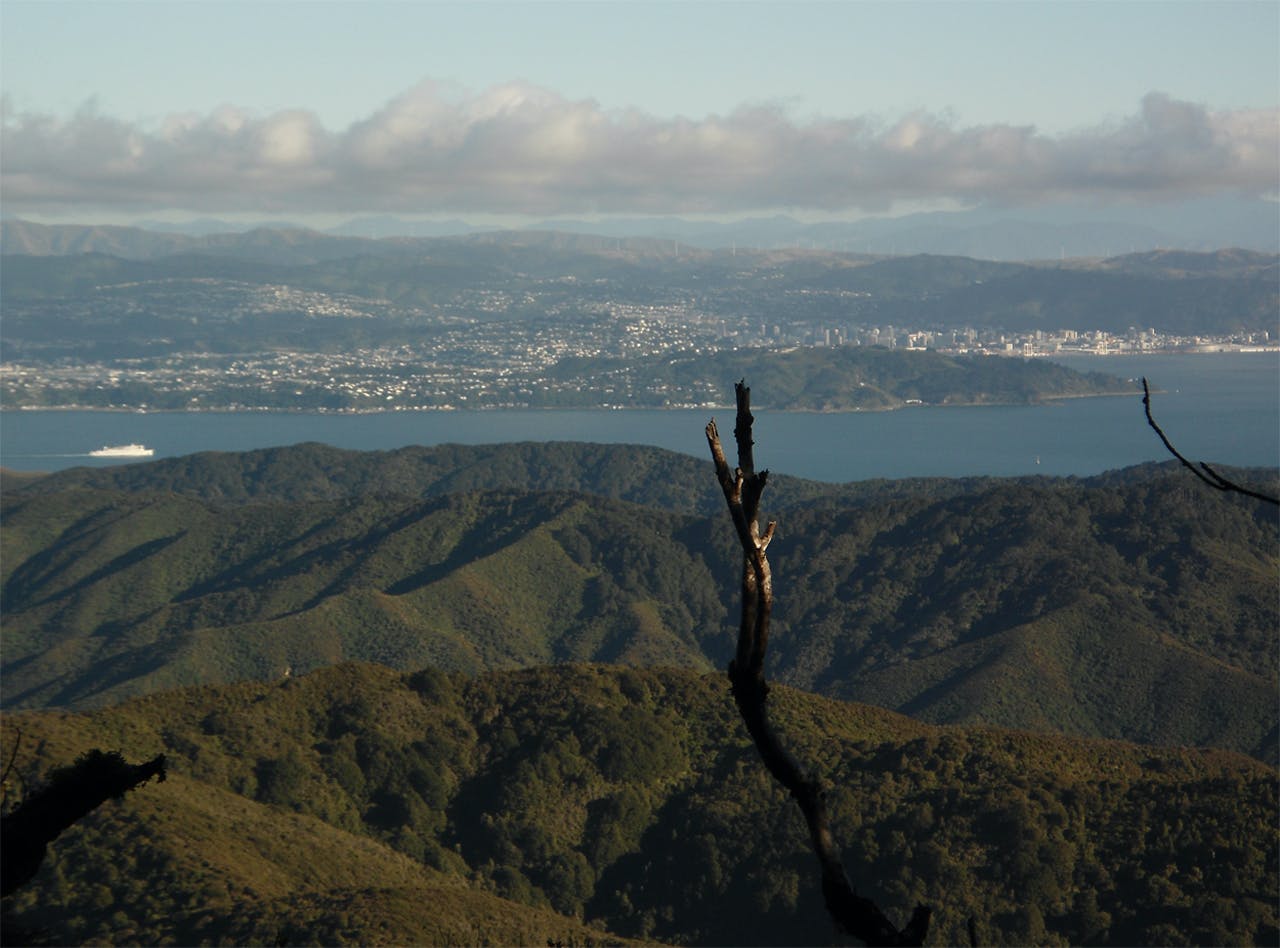 View of Wellington and its harbour from close to McKerrow summit. Photo: Matthew Pike

This walk provides a view of Wellington and its harbour that you’d expect to see only from the air. The stunning vista includes Cook Strait and the South Island’s snow-topped Kaikoura ranges.

But you have to earn these rewarding sights. Most of the tramp is among podocarp and beech forest where you have a sense of your place in the greater scheme of things and nothing more. And this is why it’s such a special place – you’re no further than 30 minutes’ drive from the capital, yet you couldn’t feel more removed.

You can start the tramp up McKerrow from Wainuiomata, but there’s a good round walk, which you can choose to lengthen or shorten as you go, from Rimutaka Forest car park.

Start by following Five-Mile Loop Track around the far side of the small hill to the left of the car park. Then turn left along Clay Ridge Track which, apart from one steep section, is a steady climb right to the top. There’s no clearing in the trees until you’re virtually at the top, but it’s well worth the wait.

Shortly after the clearing a sign points left to McKerrow summit and right to Orongorongo River. Feel free to try the short walk to the summit, but you’ll have a job finding it. There’s no view and you’ll only know you’ve passed it when you start heading downhill. Instead, take the right turn at the sign and head all the way down to the good track at the bottom.

Turn right here and, after a footbridge, the track forks. If you’re short of time or puff, the right fork is the easy way back to the car park. The left fork includes the fairly gentle climb over Cattle Ridge.

It’s well worth taking the wee climb to the lookout before the steep descent down Butcher’s Track. Take a left at the bottom and you’re only a few hundred metres from the car park. 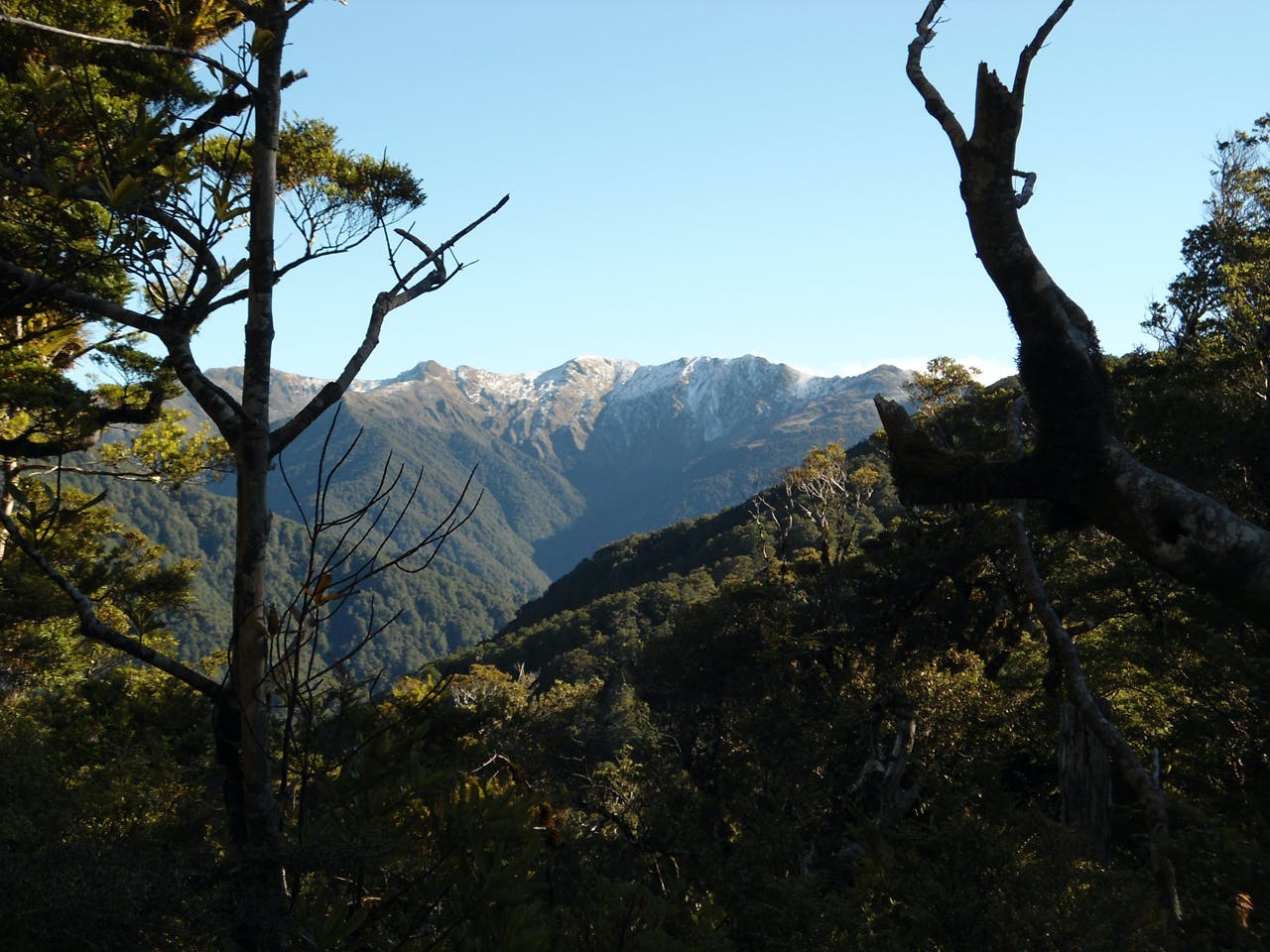 Large tree routes, pools of mud and steep climbs make this walk tougher than it may appear on a map. But with endurance comes reward in the form of spectacular views of the highest Tararua mountains, Cook Strait and Hawke’s Bay.

There’s spectacular forest to explore too – after crossing the swingbridge over the Waiohine Gorge, head through gnarled, ancient moss covered trees that only clear at the very top of Cone (1080m) itself.

The mountain does get snow at the top during winter, but not normally enough to deter someone without winter mountaineering gear. But if it looks rough at the top, the route to Cone Saddle, then down to Waiohine River is still a challenging forest tramp. You can turn the trip into a two-day adventure by staying at the historic Cone Hut – built in the 1940s using local totara timber and restored to its former glory by the Tararua Tramping Club in the 1980s.

After crossing the swingbridge and turning left, a steep track with roots as steps leads to the top of a ridge before levelling off and descending to Cone Saddle. The track from here to the summit is less muddy but no less steep. At the very top, alpine bushes give way to tussock and then the summit and the best view.

A great walk at any time of year but particularly so in winter. The poetic images of golden beaches, sunshine, turquoise water and exotic forest are still here when the tourists head home. In fact, the only thing that really changes from summer to winter is the number of people.

Instead of thinking up 50 ways to say ‘hello’ to a stream of passing walkers, you may only meet a handful in a day.

I set off from Marahau at sunrise in late May and continued for three hours before meeting another soul. And this was on a Saturday. In July and August the number of people setting foot on the track is just 10 per cent of the number in peak season.

Chances are you’ll get the finest beaches to yourself, at a pretty reasonable temperature and without the sea breezes common on summer afternoons.

It cools off at night but all four huts along the route have heating and a night in each has just been reduced to $32 per person. If you fancy embracing the cool air there are 18 DOC campsites to choose from ($14 per person).

At 51km and with slopes rather than hills, the going is easy. The track itself is first class, weaving through forest and often overlooking the countless bays beckoning you down for a quick break. Sometimes the track heads on to the beaches and estuaries themselves. The only tricky bit is making sure you hit Onetahuti and the Awaroa Estuary at low tide or you’ll have a long wait for the water to subside.

Take a water taxi back to your vehicle.