‘Attencion!’ This cryptic word sharply focuses my attention on the outline of a watch and a bold exclamation sign. A carved cloud is depicted above cascading globules cut into the panel. There’s also a cross-section of the track showing a prodigious rise in altitude.

With absolutely no knowledge of Spanish I’m still able to complete the picture – I’m about to climb a steep mountain trail, the weather is totally unpredictable and I jolly well must keep my eye on the time to survive the experience.

As I head uphill into the forest on rough log steps, the sky is a brilliant blue, utterly devoid of weeping woodcut clouds. The world is at peace on the forested slopes of the Patagonian ice-field. A clearing opens up a view back to El Chalten and I stop to admire the pretty little alpine settlement. It’s Argentina’s newest town, created in 1985 to populate the area and stake a claim in the century-long border dispute with Chile.

The trail continues over a saddle and winds through a field of erratic boulders before entering a dense lenga forest. The tall, deciduous trees have striking foliage in Sherwood Forest green.
Interspersed with the lenga trees are southern beech with emerald leaves, the same genus (nothofagus) as the dominant beeches of New Zealand’s South Island. The forest is magnificent today.

The air is still, the sky blue and the temperature a mild 12°C.

Onward and upward the trail continues through pleasant forest glades and fairy glens. It feels good to be alive on a brilliant day like this. I’m experiencing a gratifying sense of adventure that one gets in a faraway country. There’s also slight apprehension – I’m in puma country after all.

As I approach the seven kilometre mark the trail traverses a steep hillside past rock outcrops. The saddle must be close as I can spot distant summits of the Andean Cordillera peeking through the trees.

Suddenly breaking out into a boulder-strewn clearing, I stand stock-still in amazement. The heavily glaciated mountain range seems to fill the entire sky. Towering above all the surrounding peaks is a massive wedge-shaped granite spire with sheer walls that form a smooth slab right to the summit.

Mount Fitz Roy and its needle-sharp neighbour, Aguja Poincenot, are two portions of a vast granite block uplifted from the bowels of the earth 20 million years ago. They bear a remarkable resemblance to the Dolomites of northern Italy.

The mountain, which was first climbed by a French/Italian team in 1952, is named after Captain Fitzroy of the ship Beagle, which brought Charles Darwin to Tierra del Fuego in 1832. The magnificent peak is called El Chalten by the locals as well as Mount Fitz Roy (written as two words).

As I continue to stare in wonderment at the mountain, I realise with some surprise that I have managed to reach this elevated lookout point with no discomfort from my left knee. It carries the scars of a torn cartilage from an over-zealous climb on Mt Taranaki some years ago. Remarkably, the joint has performed well today. Perhaps this is due to the sheer pleasure of making the climb and seeing such an overwhelming alpine panorama. 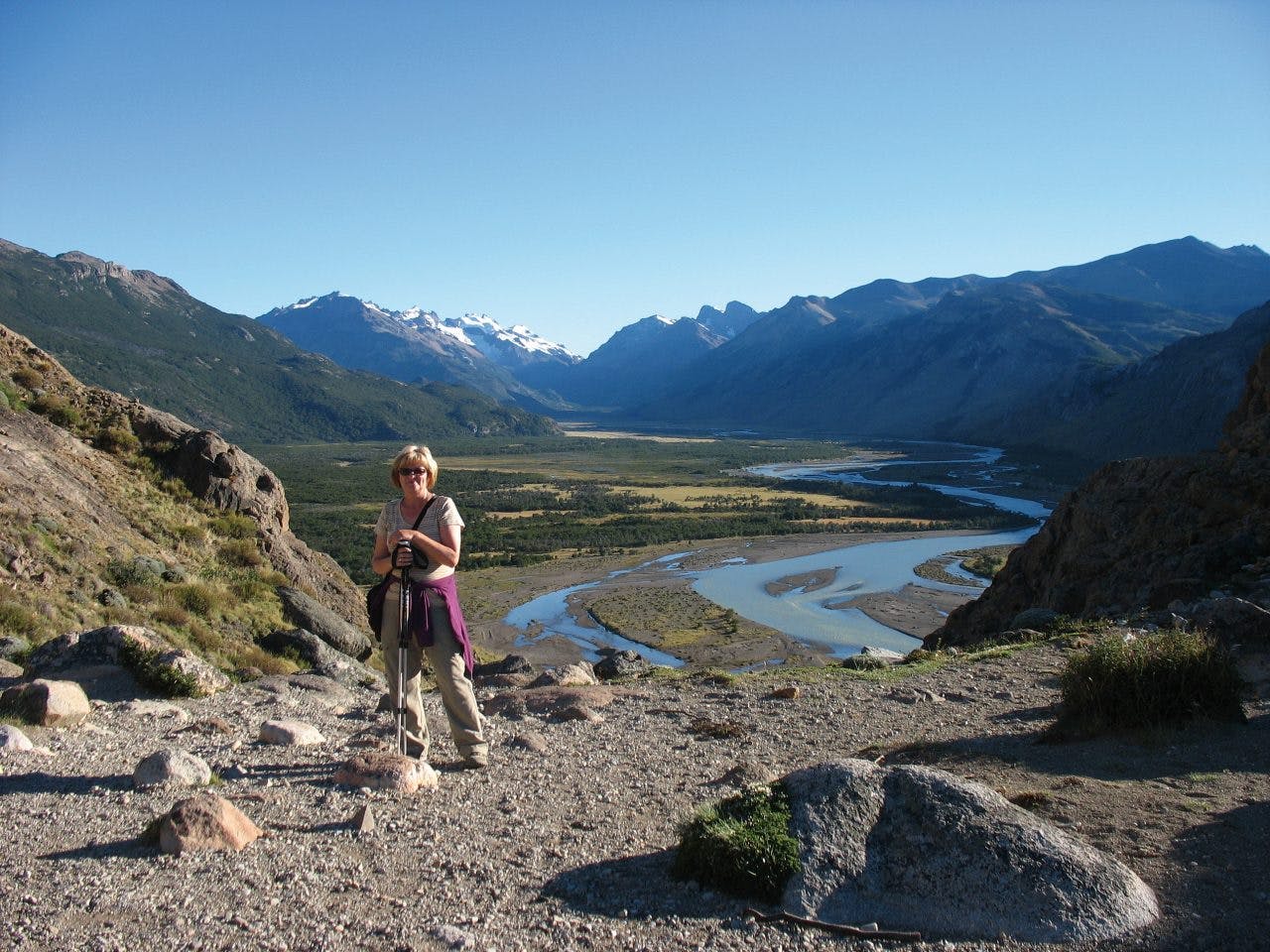 It’s a moment of revelation for me, realising that I can still climb moderate trails to reach the heart of mountain ranges. The physical exertion of climbing a steep trail is well worth the effort when you are rewarded with breathtaking views like this. It’s hard to finally turn away from one of the most recognised skylines in the world. The track leads closer to the base of the mountain and another lookout at Laguna de los Tres, but I turn off towards Laguna Capri, where I find stunning views of the snow-capped peaks reflected in the water.

The lake water is pure and crystal clear. Park rangers go to great lengths to preserve water quality. All visitors arriving at El Chalten attend a ranger talk at the park headquarters. No swimming or washing is permitted. As a result the water at Laguna Capri is perfectly safe to drink.

To prove the point I fill my water bottle in the lake and re-enter the forest for the homeward leg following a sun-dappled trail over rickety bridges and tinkling streams. Somewhere high in the canopy an austral parakeet announces his presence with a throaty song but I can’t spot him in the dense foliage.

A black-faced ibis trots out on a small clearing and gives me a surprised look. Just then a repetitive tapping sound starts up and I creep through the thickets to find a brightly coloured magallenic woodpecker hammering away on a hollow trunk as if his life depended on it.

These beech forests are frequented by a host of hard-to-see mammals like the grisson wild cat, red fox, armadillo and the shy huemul deer, which I would love to see. Then there’s the mountain puma and Patagonian skunk, which I don’t want to encounter under any circumstances.

The puma is the only animal in this region that is above us in the food chain. However, they only hunt at night and they don’t frequent campsites. The meeting and greeting regime for pumas is similar to that for American black bears – back away slowly and use your trekking poles and clothing to make yourself look as large as possible.

At each steam crossing there’s a little cluster of trekkers refilling water bottles. I greet each one with the customary ‘Hola’ and learn that they come mainly from Chile, Argentina, France and Spain.
An American from Wyoming wearing a red bandana around his neck in the manner of John Wayne, tells me he’s pleased to see some middle-aged folk like himself amongst the continuous flow of youth on the trail.

On the final descent I meet up with a large group of Koreans decked out in modern Gore-Tex adventure clothing and all-weather gear. But their slow pace up the slope rather belies their professional appearance. One couple are making gradual progress with the man holding a long, thin tree branch behind him, with his wife gripping the end as he pulls her up the hill.

El Chalten is a rustic resort town spread over a glacial valley with open spaces interspersed with picturesque chalets and alpine lodges. With just 1000 residents the town still has a pervasive sentiment of Argentinean national pride as a young evolving frontier settlement.

This self-proclaimed ‘Trekking Capital’ has 100,000 visitors each year, being one of the main gateways to the vast Los Glaciares National Park. The park is the largest expanse of ice in the Southern Hemisphere after Antarctica and carries UNESCO World Heritage Area status.

Sitting down at the end of the day with a cold beer in the comfortable Kalenshen Lodge, I feel very fortunate to have made the climb to view Mount Fitz Roy. The breathtaking scene is still etched in my memory as surely as those trail instructions are carved into the wooden trailhead sign. 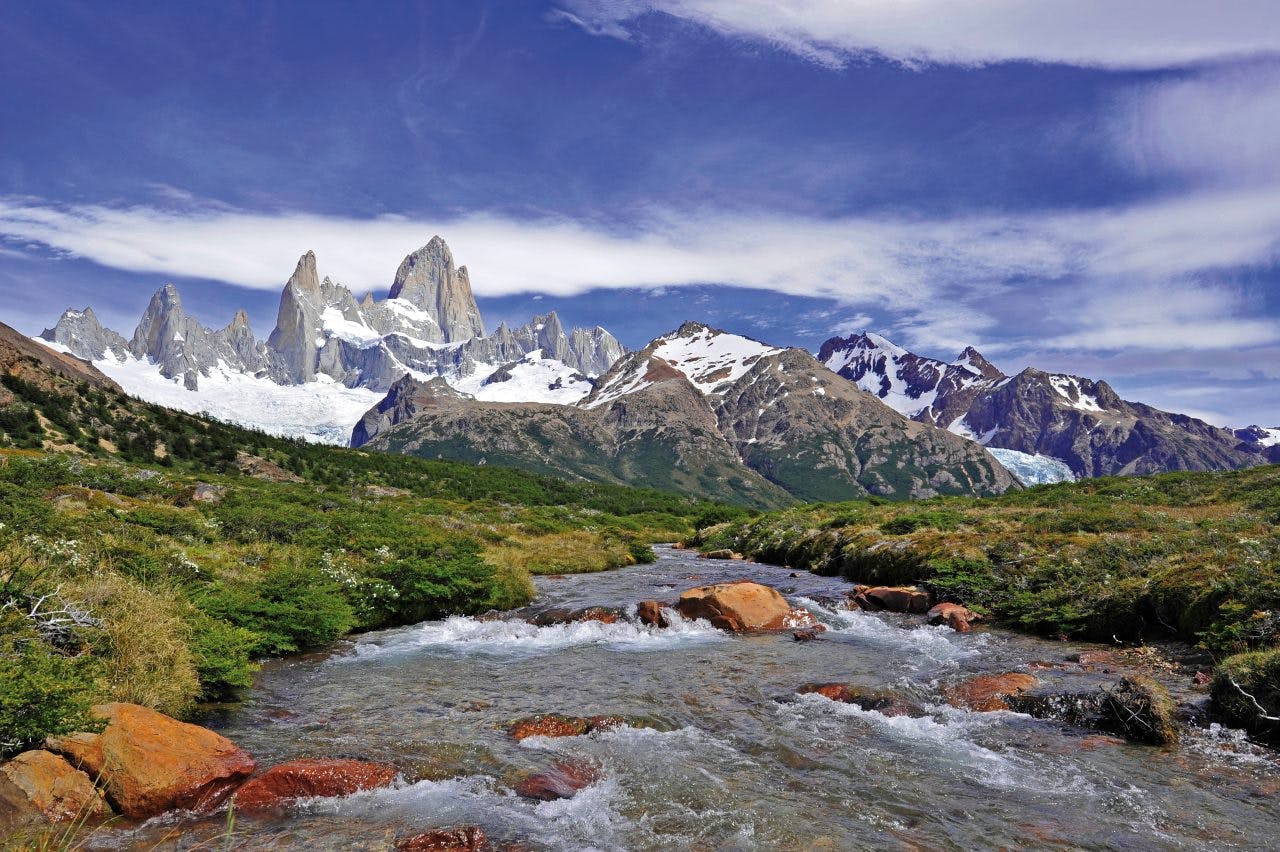 Some of the incredible scenery on the Mount Fitz Roy trail. Photo Paul Rush