Like a long thread cast onto a crumpled blanket, the Te Anau Milford Highway curls for 120km between the valleys and mountains of Fiordland National Park linking Lake Te Anau with Milford Sound and in so doing forming New Zealand’s most spectacular mountain road and one of the greatest scenic highways in the world.

The road follows the shores of Lake Te Anau for 30km before heading into the dramatic post-glacial canyon of the Eglinton Valley, a world-renowned fishing spot and scene of utmost grandeur; here rolling flats of grasslands lap mountain walls, forest tongues extend from the flanks to form natural shelters, and shimmering lakes punctuate this green symphony at irregular intervals.

At the valley head the highway cuts across the Southern Alps through The Divide to access the Hollyford Valley draining the western flanks of the Alps. At just 532m, The Divide is the lowest point on the Main Divide south of Haast Pass. Once the road reaches the valley floor of the Hollyford, it begins a steady climb beneath the fantastically sheer Darran Mountains to gain the upper valley and the massive granite wall of Homer Saddle penetrated by the Homer Tunnel to access the Cleddau Valley. The road then begins a steep descent to Milford Sound passing beneath some of the most fearsome mountain terrain on earth.

But don’t let your journey end here, there’s a huge variety of adventures waiting just beyond the road, so stop, camp and explore.
Here’s a few trips to get you started for a week’s visit to the Milford Road – the road of adventure.

A moderately difficult crossing point from the Eglinton Valley to Glade House on the Milford Track, Dore Pass is steep and exposed but has a marked route. It is accessed by fording the Eglinton River to the Murcott Burn where a steep trail climbs into the basin below the pass. The pass itself boasts a grand view of the Clinton Valley. Special care is required on the western flanks of the pass and if snow lies on the route this becomes an alpine crossing. It makes an unusual way to visit the Milford Track and with some careful campsite location, at least 500m from the Milford Track, a day trip could also be made into the upper Clinton Valley.

The Glade Burn also enters the Clinton River at Glade House and could be used for a return route back to the Milford Road. The route is straightforward but some steep, shaley bluffs need to be sidled on the pass’s northern side.

This steep, spectacular pass links upper Mistake Creek to Hut Creek – both tributaries of the Eglinton River. The catchments are tracked to the bushline and the entire route could be walked in a fine day over the summer months providing a challenging trip into the heart of the range.

However, as both of the upper valleys have extensive flats they could be used for remote camping locations away from the highway. These sites can be reached in 1-2hr and are beautifully located under the peaks of the Earl Mountains. The U Pass route could also be tacked on to the Glade Pass route for a longer trip.

Remote and seldom visited, the upper East Eglinton can be reached on a marked track beginning off the Milford Road. This track leads into a forks and later the open upper valley which has extensive flats and good camping.

The valley saddles with upper Cascade Creek from where the Livingstone Mountains can be accessed and some steep, well chosen routes to the Greenstone Valley near Lake McKellar are possible.

The range can also easily be followed, north, all the way to Key Summit and the Routeburn Track and The Divide. Moderate route finding skills and good weather are required for this section.

This option would make a fine 2-3 day tramp through some great country with superb scenery over the Earl, Livingstone, Ailsa, and Darren Mountains.

A large post glacial lake sited high above the Hollyford Valley offers a strenuous tramp into the heart of Darran County – the vertical rock summits which have challenged generations of mountaineers.

You don’t need to be a mountaineer to reach Lake Adelaide, however, though some route finding skills are necessary to locate the rock bivvy at the lake’s head. For those with adequate experience and equipment a trans-alpine crossing can be made to Gertrude Saddle and the upper Hollyford Valley, otherwise a return must be made down Moraine Creek. 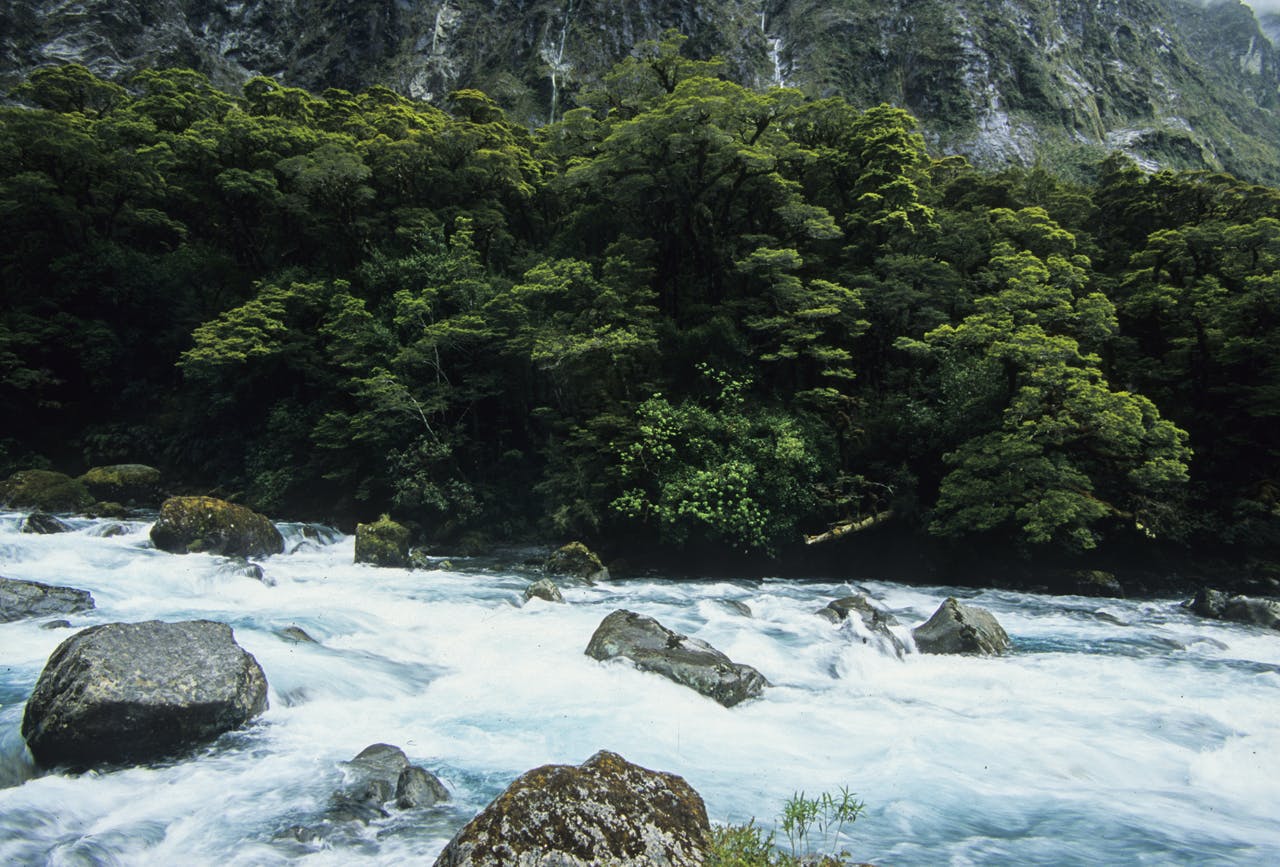 On the western side of the Homer Tunnel are several tributaries of the Cleddau. The largest, Tutoko River, drains Mts Tutoko and Ngapunatoru Plateau. Though these are climbing routes the lower valley has a rough track into the flats where a camp site might be located among the flood detritus and swamps to allow for exploration of the upper valley.

Turners Biv high on the flanks of Mt Madeline can also be reached from the valley floor, but this is a difficult trip.

This small creek flows into Lake Gunn midway along its western shore; it is a hanging valley which grants access to the Main Divide just north of the Earl Mountains and an unmarked crossing over the Divide to Falls Creek. The descent is steep and care is required.

Lake Marian
One of the most beautiful short walks available along the highway is into the spectacular alpine basin of Lake Marian, above the Hollyford Valley. The lake is large and lies in a hanging valley beneath Mts Christina and Crosscut. The walk up takes less that two hours and a camp site could be found near the outlet.

Falls Creek
Falls Creek is well known for its spectacular waterfall which the Milford Highway passes on a narrow one-way bridge in the Hollyford Valley, however, a less frequented track climbs steeply to access the valley headwaters and Main Divide peaks of Mt Suter, the Pyramid and Ngatimamoe Peak.

Key Summit
The world famous view from the modest ridge crest at Key Summit is good reason to take the 90min hike from The Divide. This track is also the start of the Routeburn Track and could be combined with a short visit to Lake Howden or a longer day trip to Lake MacKenzie.

Hidden Falls Creek
If a deep forest walk takes your fancy, try a day walk into Hidden Falls Creek and hut on the Hollyford Track where you can marvel at the massive height gain from valley floor to mountain top – over 2km and almost three for Mt Tutoko. The falls are voluminous and spectacular.

Humbolt Falls, 275m, near the start of this trip are also worth a visit.

Gertrude Saddle – Barrier Knob
For a bit of a challenge take the upper Hollyford Valley Track to Gertrude Saddle, poised above a 1000m drop to Gulliver Valley near Milford Sound. Some scrambling is required to reach Black Lake and the saddle. This route should not be attempted if snow lies on or above the trail. Beyond the saddle those with alpine experience and equipment can attempt the rocky scramble to Barrier Knob and a stunning panorama of Fiordland’s majesty.

Lake Gunn
The Milford Highway runs along the eastern shore of Lake Gunn, just north of Cascade Creek and thereby offers access to the lake for fishing and canoeing. In addition there is a nature walk at the lake’s southern end and a camping and picnic area at the northern end. The lake’s setting is magnificent.

Eglinton Valley
Spacious and beautiful, the Eglinton is one of the showpiece valleys of the Milford Highway and is also renowned for the roadside and riverside camping sites scattered along its length.

Gunns Camp Hollyford Valley
If the Milford tunnel goes ahead, it will emerge near here and the road will be clogged with tourist busses, no doubt diminishing the allure of this rustic commercial camp once run by the legendary Murray Gunn. The camp is fully immersed in the wilderness setting of the lower Hollyford and makes a great base for exploring the many nearby tracks and climbs.