Protected by deep gorges flowing out of the Olivine Range, Forgotten River flats are, at about 800m, relatively elevated and surrounded by a narrow band of silver beech forest.

The Forgotten Branch of the Olivine River was travelled by Barrington and his mates on an epic prospecting trip in the 1860s. It was then literally forgotten, and didn’t reappear on the maps until Holloway’s journeys in the 1930s. Peaks of the Olivine Range rear above the flat, Mt Gates and Blockade, while licks of ice from the Milner Ice Stream curl over and descend as waterfalls.

Further up the valley, Forgotten River Col gives access to the Olivine Ice Plateau. This is a utopian setting loved by many who have travelled and camped here on their way to and from adventures in the Olivines. But it is not such an easy place to get to. Most come from the Dart Valley via the Beans Burn and Olivine Rivers over two or three days. In morning dew this place sparkles with the calm and freshness that only isolated corners in the mountains seem to offer, and this is one of the best. 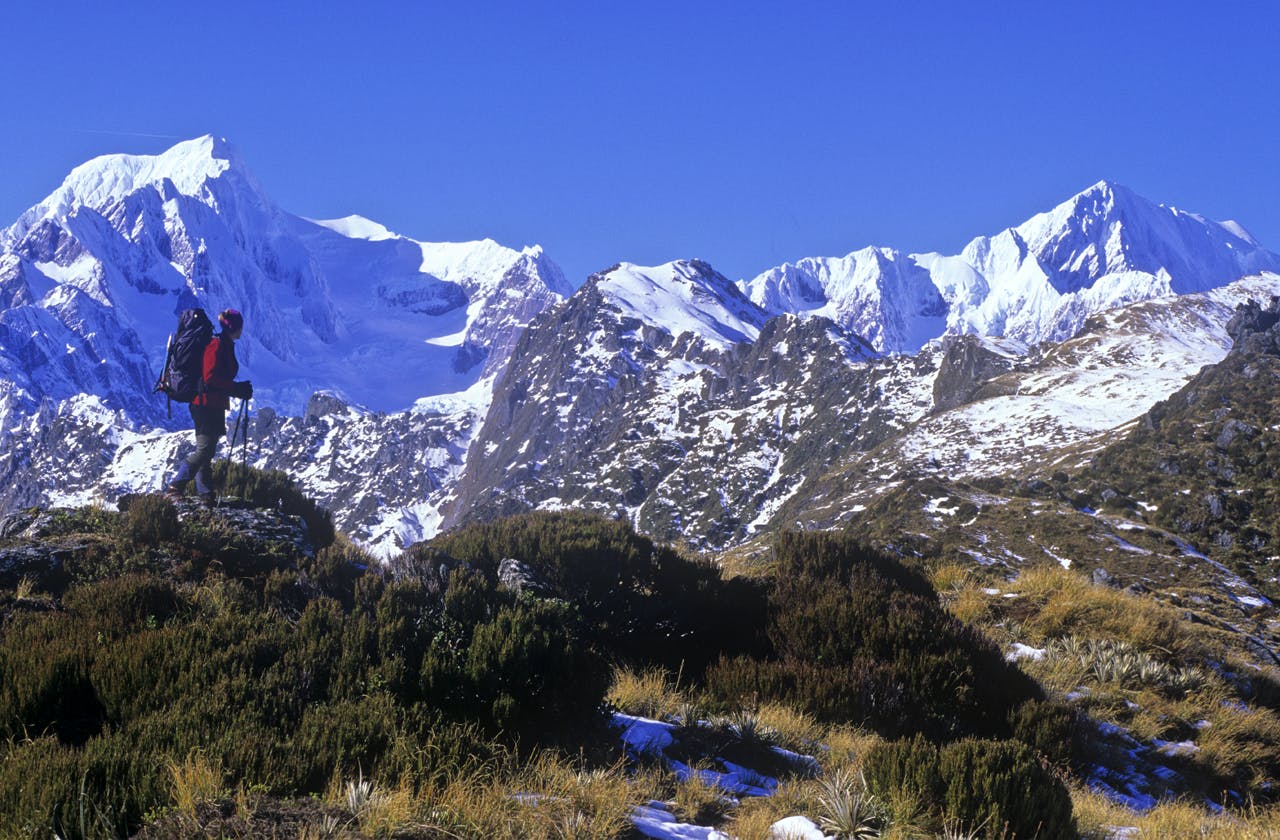 A camp among the tussock basins around Mt Fox is one of the few reasonably accessible overnight trips above the West Coast bushline.

The 1345m high peak rises immediately to the south of Fox Glacier, and commands a fine view into this spectacular piece of glaciated landscape, where the ribbon of white ice continues to gouge through the alpine foothills almost to the coastal plain.

This can be done as a reasonable day trip, but should the afternoon clouds roll in and obscure the view, then the effort of a 1200m ascent from the highway below would be in vain. Far better, then, to plan a camp somewhere along the broad tussock and tarn-speckled ridge; the further along, the better the views.

Any annoying clouds that materialise during the afternoon may well disperse towards sunset during periods of settled weather. The chances of having uninterrupted views of the loftiest summits of the Southern Alps, dominated by the ice-draped West Face of Mt Tasman along with the entire Fox névé nestled below a wall of snow and ice-draped peaks, are far greater for those prepared to spend a night up here.

Settle down for a classic West Coast sunset, far removed from the crowds. 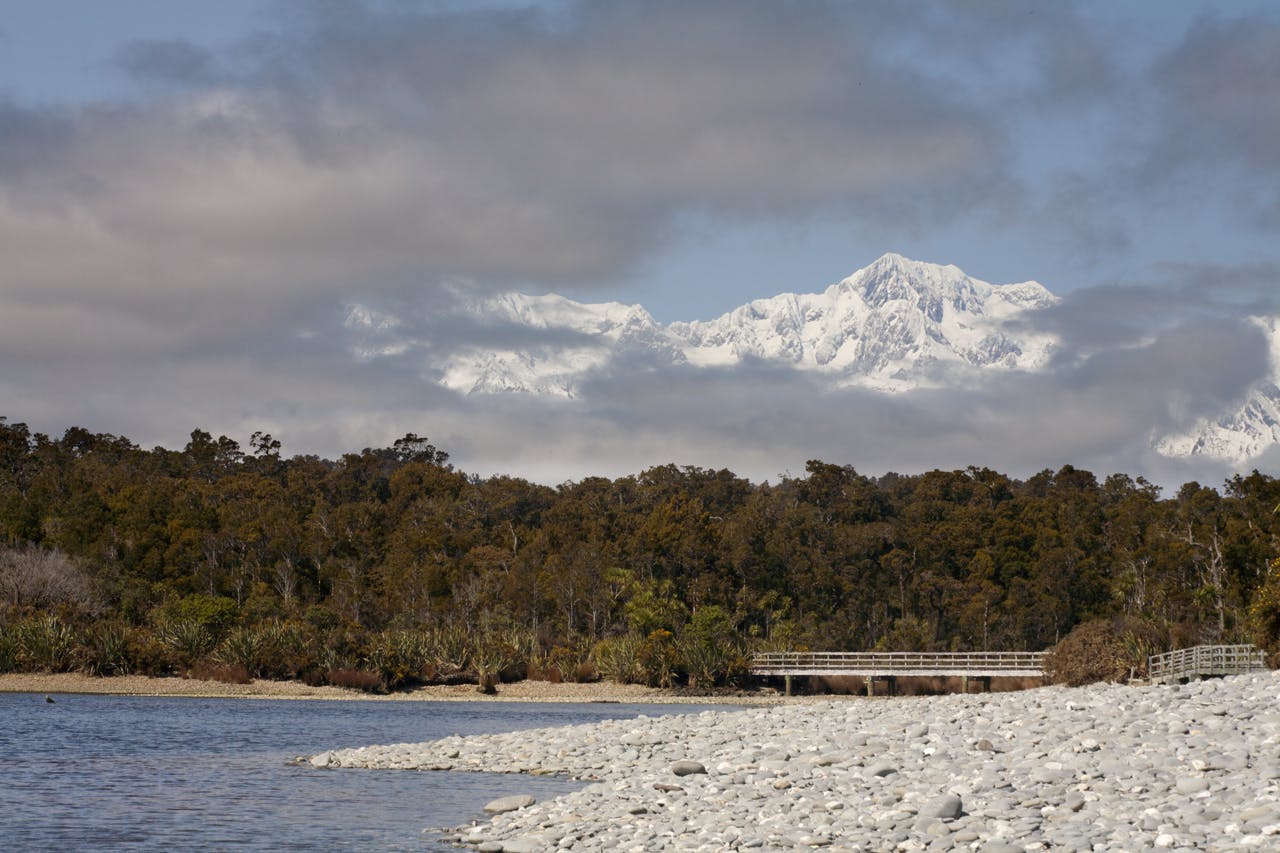 In 1865 James Gillespie arrived at a wild West Coast beach to find the sands speckled with gold particles. Within a month or so the population of the newly sprung-up township clinging to the very edge of the South Island had topped 650 souls, along with the usual accompaniment of a dozen stores, butchers, bakers and, of course, quite a number of ‘hotels’.

Within a couple of years the gold had gone and the settlement known as Gillespies Beach was more or less a ghost town. The beach and surrounding areas though still have a kind of gold that folk yearn for, namely, a small slice of tranquility far from the chaos and commercialism of modern New Zealand.

A half hour drive from Fox Glacier township, Gillespies Beach offers a variety of wild escapes, from the surf crashing incessantly on steeply shelving stony beaches, to coastal forests alive with the call of bellbirds, and sleepy lagoons best explored by canoe. Rusty relics of the gold sand days lie discarded among the gorse just behind the beach, while wooden bridges span the tannin-stained waters of the lagoon on the way northwards to a tunnel carved through an old moraine ridge. Beyond the tunnel, drop down to Galway Beach and the seal colony, or climb to the lookout for a panorama across forested lowlands to Mts Tasman and Cook at sunset.

It’s a memorable place to camp, but keep in mind that sandflies also like West Coast beaches.

Access From the end of Gillespies Beach Rd, directly west of Fox Glacier
Time Camp and explore at your leisure
Map BX14 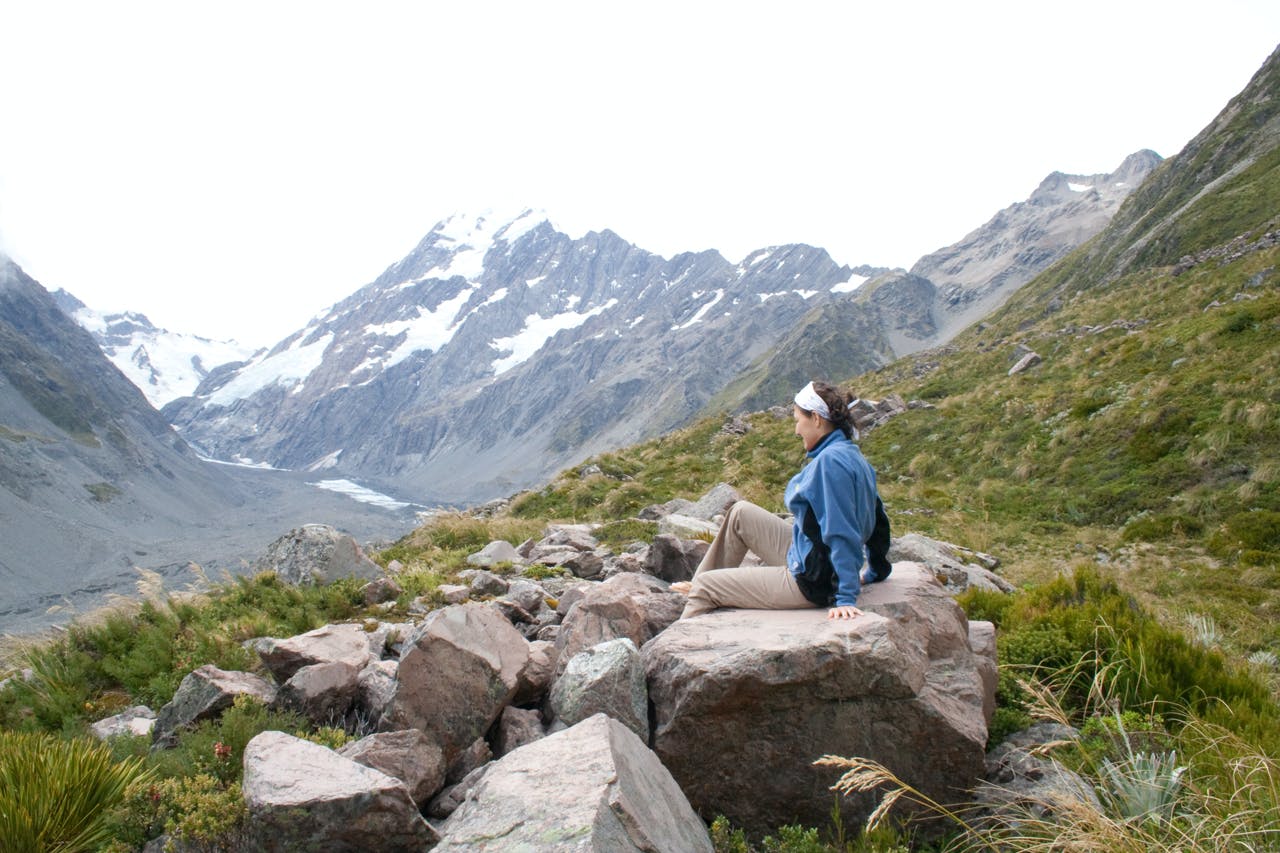 A short diversion from one of the most popular tracks in Aoraki/Mt Cook National Park will have the intrepid tramper in a seemingly remote wilderness setting amongst the tallest mountains in the country.

The Hooker Valley Track takes day walkers to the Hooker Glacier and lake, but right at the second bridge over the Hooker River is a gate providing access to the true left of the Hooker Valley, right beneath the Mt Cook Range. This route is mostly used by those crossing Ball Pass, but also provides a great overnight camping destination for those wanting some peace and quiet not found in the busy huts and camping areas.

This is grand country. Across the valley New Zealand’s biggest mountains are easily spotted and can be ticked off as you go: Mt Sefton, The Footstool, De Faur Peak and the biggest of them all, always in view and at the head of the valley, Aoraki/Mt Cook itself.

The track includes some sidling above the Hooker where care should be taken in wet weather when it seems the entire Mt Cook Range becomes a giant waterfall. Once past the sidle, it’s fairly straightforward tramping over scree and moraine.

Pick your campsite – the best is roughly 5km from the gate and directly opposite Hooker Hut – and spend the evening gazing at some of the most easily accessible big mountain scenery you’ll ever find.

Access Take the Hooker Valley Track from the end of Hooker Valley Road until the second bridge across the Hooker. Pass through the gate and walk until you find a decent camp spot.
Time Two days
Map BX15