Every year thousands of people visit New Zealand’s 14 national parks. That’s a fantastic turn-out, but sometime after your 15th “hello” or “g’day” to passing trampers as you head to your destination you start to wish you were somewhere quieter. Somewhere more remote – or at least that feels that way. Here, then, are some of the best national park trips you’ve never heard of. All you need to do is pack your tent and get out there. 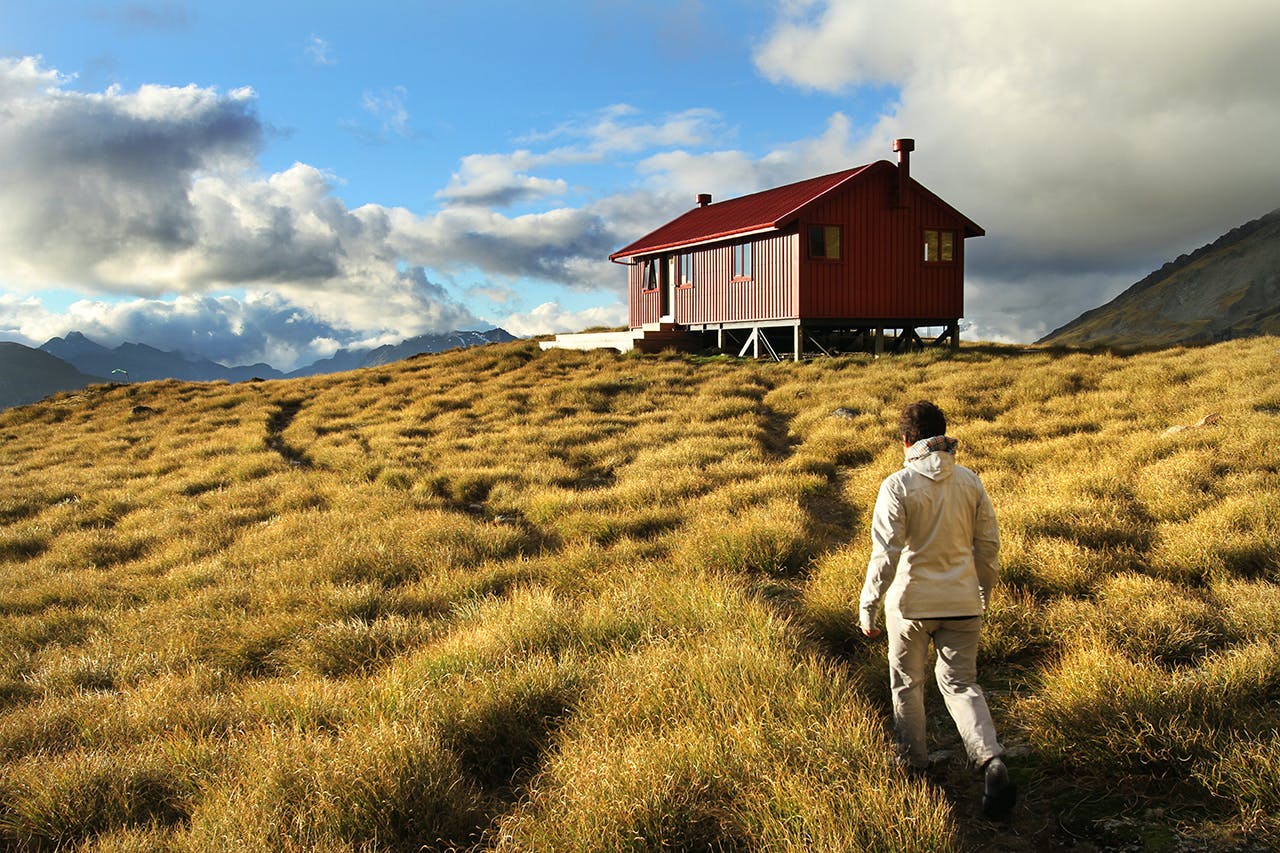 This spectacular location lies directly above the Haast Pass Highway in South Westland and can be reached in about half a day from the road, that is, at least to Brewster Hut and the camping area nearby. In fine weather it is a stunningly beautiful trip with several options for going higher and farther depending on your skills and conditions – but the area also tends to be very popular with tourists so it may be prudent to pack a tent.

The track up is unrelentingly steep, climbing 1000m to the hut site, from where there are grand views over the entire Haast Pass region. From the hut it is possible to reach the Brewster Glacier snout and, if equipped, to climb onto the glacier and ascend it to Mt Brewster. An easier option is to scramble up the easy rock to the summit of Mt Armstrong (2174m), directly behind the hut for views along the Divide to Mt Aspiring.

An interesting return trip could be made by traversing south-west, just below the ridgeline, from Mt Armstrong, to Mt Kaye, crossing over the ridge and dropping down the snow and talus slopes of an unnamed tributary of the Makarora River.

This is a moderately challenging route and reaches the main valley just upstream of Makarora Hut, near Pt777.

The coastal stretch of Paparoa National Park is familiar to many visitors who either gaze upon the strange rock formations at Dolomite Point (the ‘Pancake Rocks’) or, for the more adventurous, explore the canyons and narrow gorges immediately behind this coast.

The mountain range from where the National Park gets its name provides, on a clear day, an enticingly rugged backdrop way above the densely forested foothills.

The majority of the Paparoas involves some fairly hardcore tramping to gain the jagged ridgeline above, but at the northern end of the range these inviting granite tops can be accessed by way of a good track with the 6-bunk Buckland Peak Hut situated at the bush edge.

Buckland Peaks, at around 1300m can be explored in a couple of days. By basing yourself at the hut, evening and early morning forays among the granite tors (about 2hr above the hut), offer the best times for cloud-free views. And the views from these summits are extensive; northwards along the sweeping coastline towards Karamea, west to the Lower Buller River and Westport and even as far as Aoraki/Mount Cook to the south.

A perfect fair weather getaway would be to camp up here among the rocky outcrops and small alpine tarns. 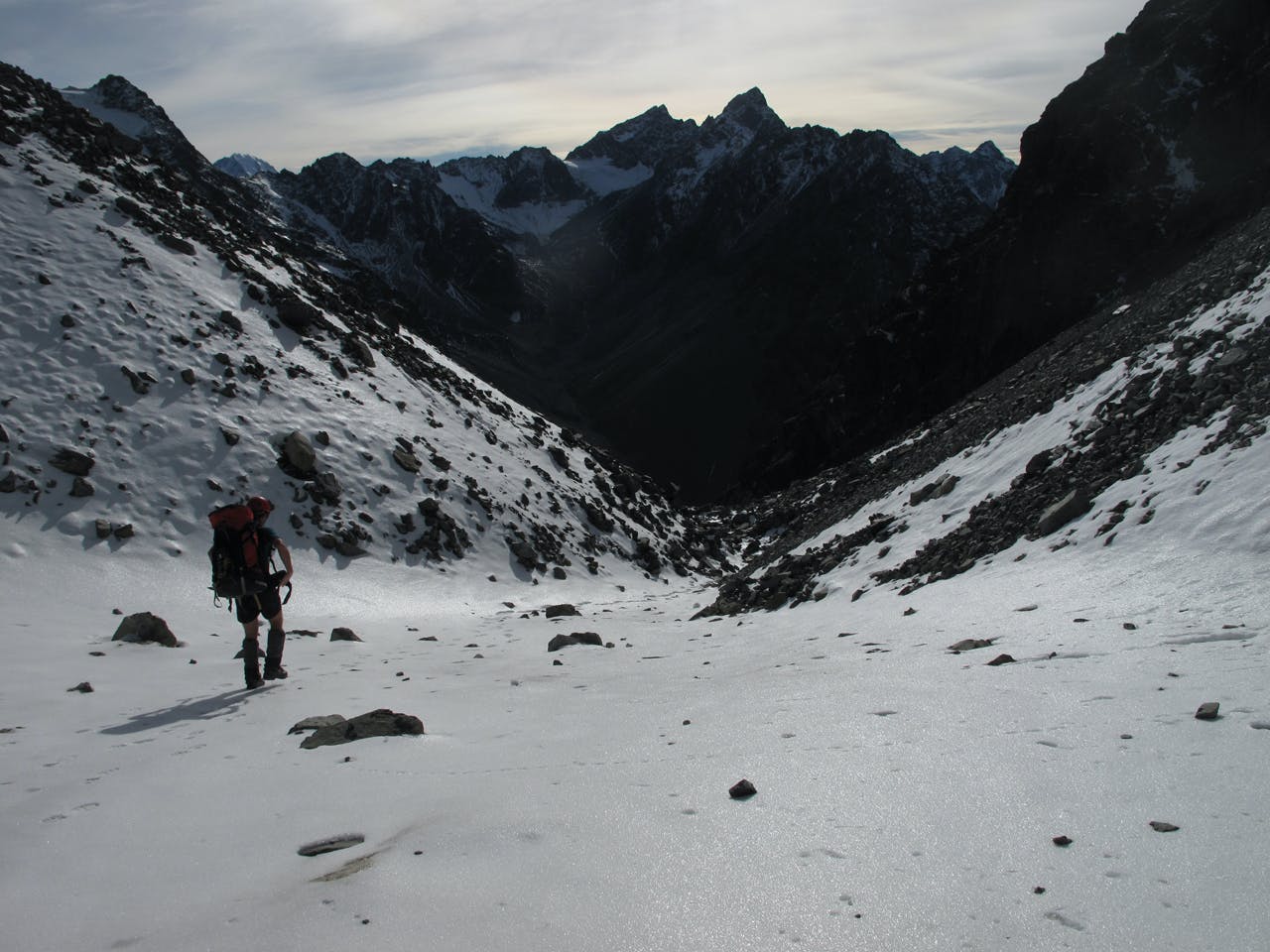 Aoraki/Mt Cook National Park is the home of alpine climbing in New Zealand, but that doesn’t mean there aren’t options for the keen tramper.

The Liebig Range offers some excellent trips for the adventurous, with a good overnight or long weekend option to tramp up Gorilla Stream from the Tasman. Rock dominates this trip, but there are some glorious campsites to be found over in Pinnacle Stream.

Gorilla stream is easy travel on fine gravel, but it is a stiff climb to the unnamed pass to Pinnacle Stream. Big piles of debris and snow slopes tell you you’re in the Canterbury Alps. It certainly makes for a distinctive trip when you don’t see a single tree, but the reward is spending time among the big mountains of New Zealand, and exploring some technically straightforward but interesting passes. 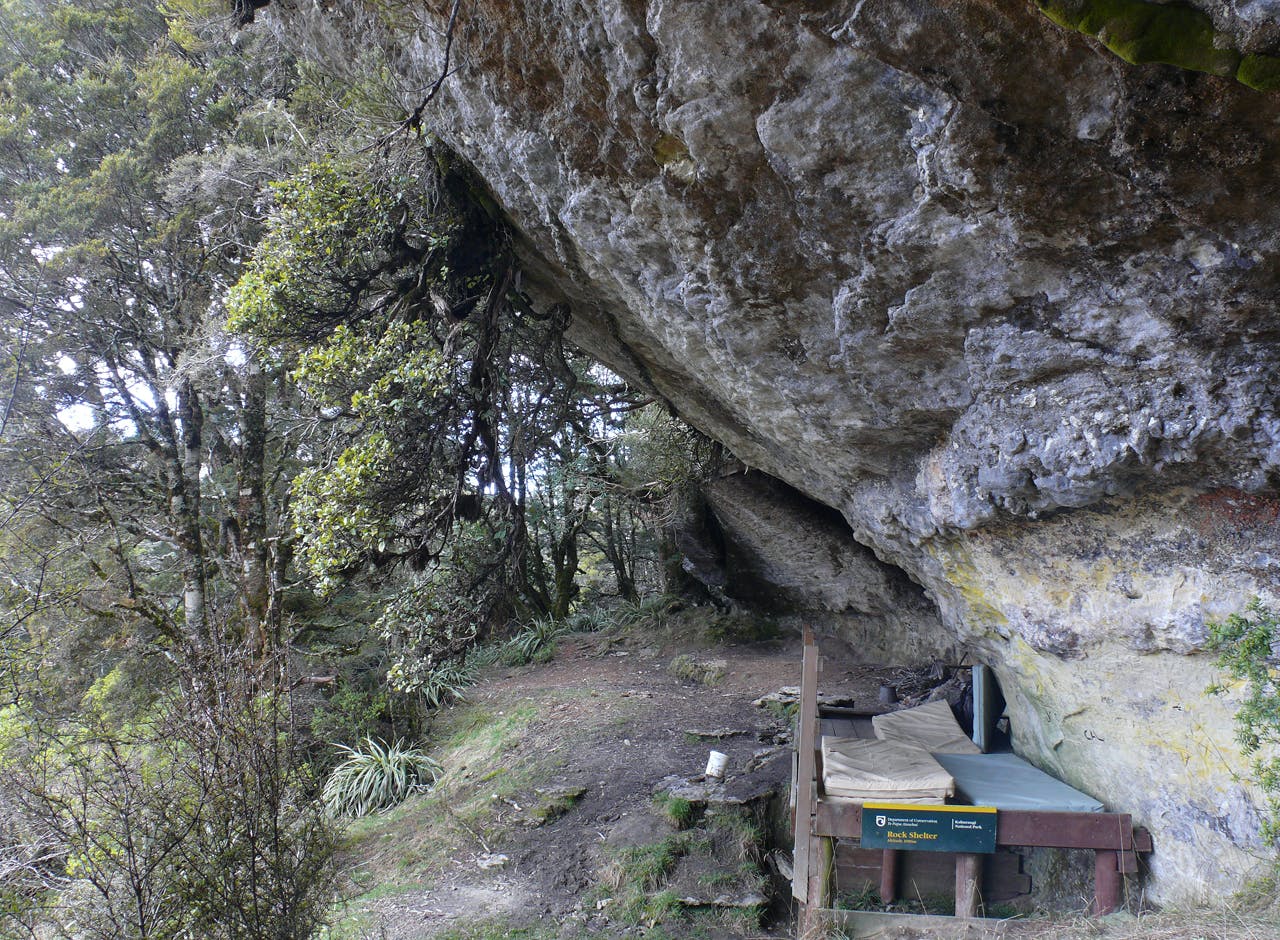 Shelter comes in many forms in the mountains, but mostly we rely on huts and tents. Sometimes nature conspires to offer its own, in the form of rock bivvys, and some of the best are formed from limestone around the Mt Arthur Tablelands. Dry Rock Shelter is one of them, with water handy, and beech trees keeping the breeze to barely a whisper across the entrance. Yet there are still views of tussock flats out front. It’s an appealing place, tucked in at the bushline.

A sleeping platform has been built at one end, and there is room for a fire under the overhang. The plant life is rich and varied, as it often is in limestone country, and this richness helps sustain a wide variety of native birds. Robins visit, weka prowl, bellbirds call, and brown creepers flock in the trees.

At dusk you can lie in the open air under shelter and listen to kaka chortle and moreporks cry. 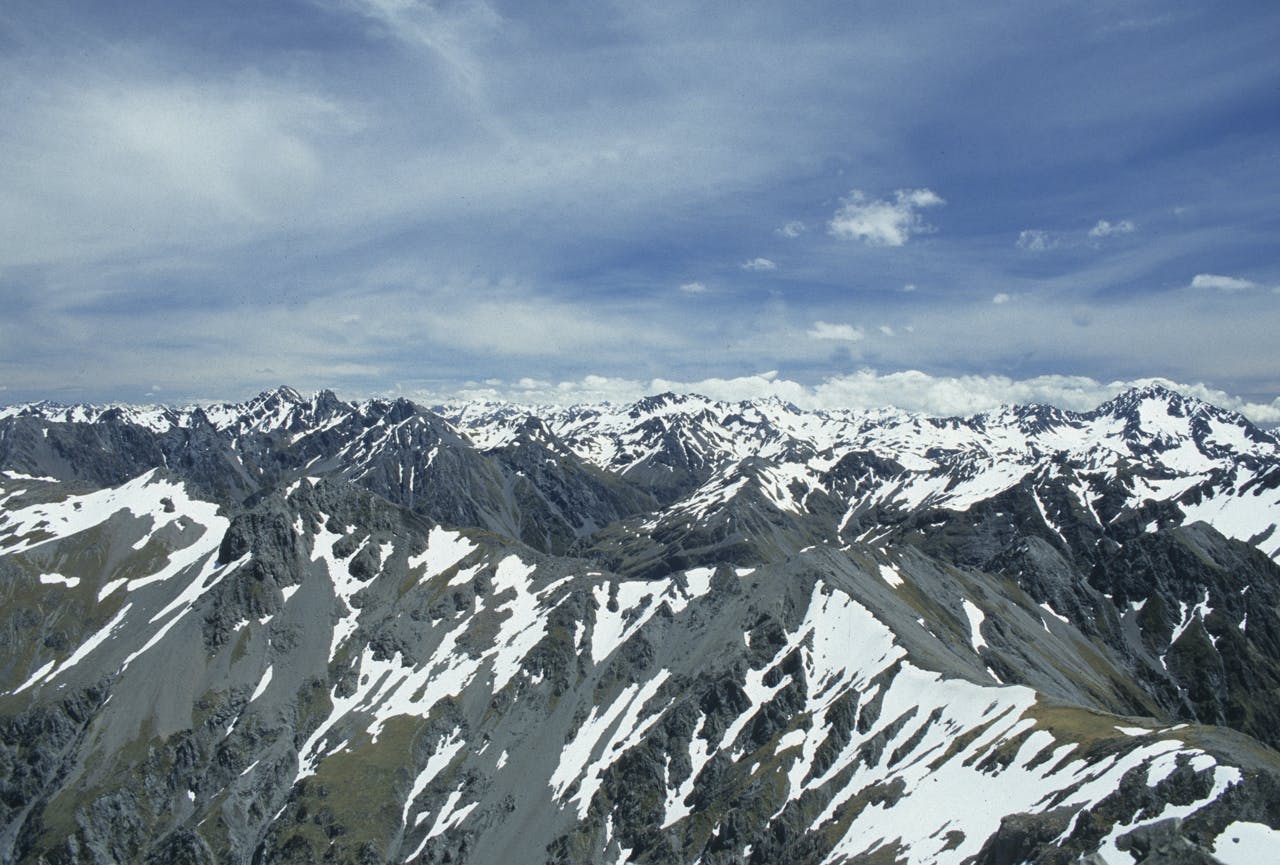 A mountainous view from the summit of Mt Valiant. Photo: Pat Barrett

The seldom visited East Hawdon is a large tributary of the Hawdon Valley and runs between the Blackball and Savannah ranges from Mt Valiant (1847m). The riverbed provides access up-valley to the small East Hawdon Bivvy, a two-bunk hut located below the upper valley forks. The valley is very attractive and allows easy walking through its modest gorges, in low river flows, to the bivvy where it is also possible to camp.

The extreme valley head is worth exploring and fitter parties could attempt Mt Valiant via the tussock basins of the north-west feeder stream and rock of the north-west ridge. The peak is a straightforward scramble and has extensive views over eastern parts of the park. Smooth Peak is also accessible from here and a return to the main Hawdon Valley could be made along the Blackball Range.

The East Hawdon has also been identified as habitat for the critically endangered orange-fronted parakeet and receives frequent attention from DOC in an effort to eradicate pests. 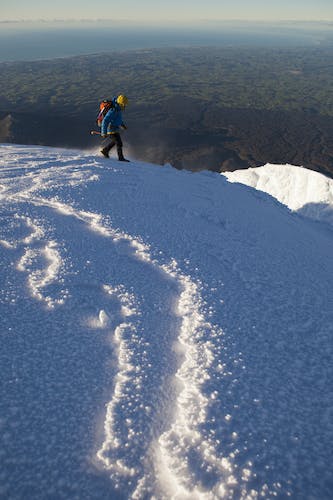 On the summit of Mount Taranaki. Photo: Mark Watson

Enjoyable either as a summer or winter route, the East Ridge of Mt Taranaki offers a clean, direct line to Shark’s Tooth on the mountain’s crater rim. The climb can be accessed either from the Stratford Plateau car park, or the North Egmont access road. The latter offers accommodation at the Taranaki Alpine Club’s Tahurangi Lodge; perched on the mountain’s slopes an hour from the car. The lodge is comfortable and offers great views.

The climb entails tussock, scoria and then scrambly rock in summer and in winter ever-steepening slopes of snow and ice, and is a test of all-round ability on firm slopes. You’ll want to have your cramponing technique sorted for this one and some parties may consider using a rope on the steeper sections in firm conditions – it’s continually exposed and no place for a slide.

At any time of the year though you’ll be rewarded with a climb in a fine position, with amazing views to the east. If you’re lucky, Mt Ruapehu will be visible, tempting you on to further adventures. 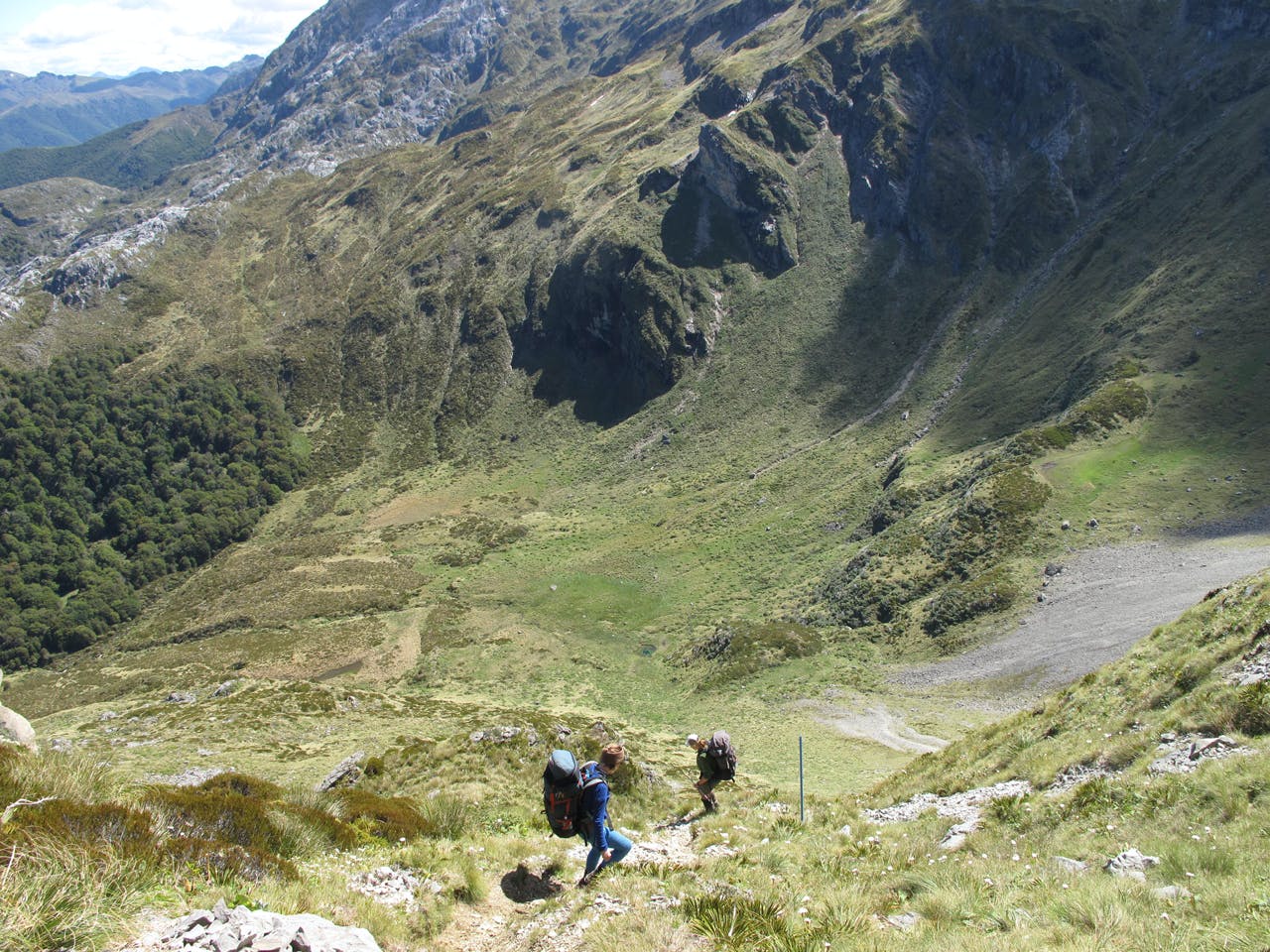 Kahurangi National Park is incredibly geologically diverse and its karst landscape is a major drawcard.

Mt Owen and Mt Arthur are well known, but by ducking off the side of Mt Arthur you can spend a quiet night in a tidy little hut in a spectacular karst basin.

There are two options for reaching the lovely six bunk Ellis Basin Hut. The more spectacular is a poled route from near the summit of Mt Arthur. You’ll get a spectacular ridge traverse and amazing views across the Waimea Plains to the Richmond Ranges, and south to the major peaks of Kahurangi – Mts Owen, Kendall and Patriarch.

If a pleasant bush walk is more your thing then a good track sidles up the Ellis from Baton Valley Road. While the going is good, you’ll be delighted when you break out into the top basin and take in the extensive views.

The cute hut is nestled in the forest fringe, and looking up valley the imposing bluffs of the Twins and Arthur ring the basin. It’s a place you won’t want to leave, and that you won’t be able to get out of your mind. 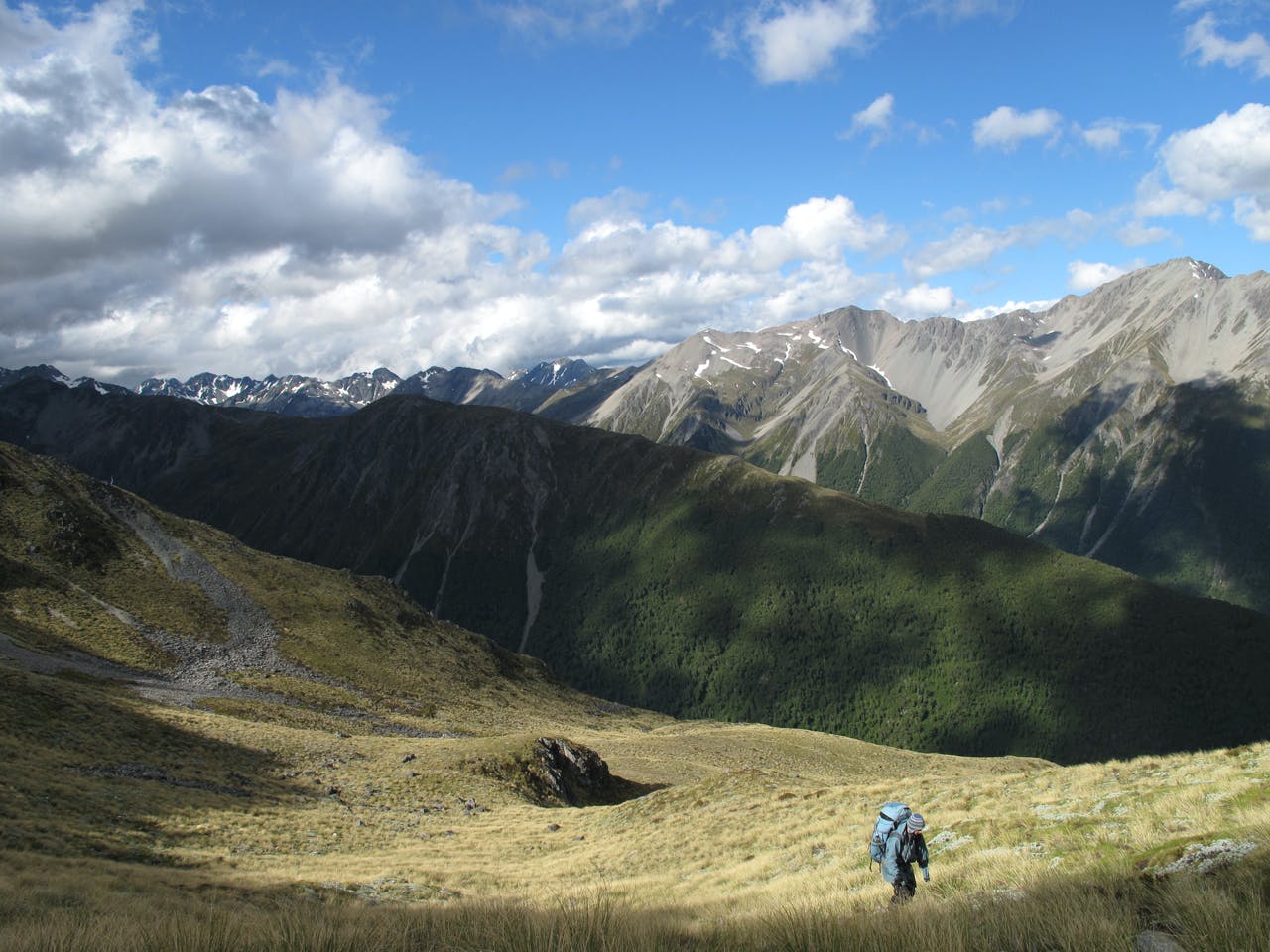 Below Enid Pass with the Waiau Valley beyond. Photo: Richard Davies

Nelson Lakes is a pass-hoppers paradise, but for those looking for a ‘pass less crossed’, Enid Pass between Nelson Lakes National Park and the St James conservation area could be the ticket.

This bouldery notch between Mt Humboldt and Mt Enid in the Spenser Mountains makes for a spectacular loop trip with great camping.

Take the popular track up the Matakitaki River to the East Branch. An old track (still in good nick) climbs through open beech forest from near East Matakitaki Hut. From there, it’s off track, following rocky streambeds and tussock leads through a series of stepped basins (Mt Una can also be climbed from this route) until the pass is reached.

The descent to the Waiau is slightly more tricky, but well worth the effort. Descend scree slopes, avoiding a few bluffs, to the big tussocky bench at the 1680m contour. This is spectacular wild camping at its best, with big boulders providing sheltered campsites.

The descent to the Waiau via Pt1703 provides wonderful views of the St James area, and the camping on the river flats is stunning. The Waiau is a veritable backcountry highway with numerous options to make your trip as long or short as you like from there.