Although only fours hours from Auckland by ferry (or 30min by plane), Great Barrier Island is a place apart. It’s New Zealand’s fourth largest island, after Rakiura, and a place of old volcanoes, whittled down by time, wind and rain.

Ringed by a series of rocky cliffs, and magnificent golden sand beaches, the island’s interior is dominated by bush. Around the lower levels, this is lush sub-tropical forest, dominated by pohutukawa, nikau palms, puriri and kanuka. Higher up, scrubby forest, wind-cuffed and straggling, is still recovering 80 years on from an intense period of kauri milling.

Aotea remains free of mustelids, deer, hedgehogs or possums, and its birdlife is diverse. Trampers will often see flocks of kaka, a sight now rare on the mainland. The island is also home to 13 species of native lizards. Despite having nationally significant natural and historical values, much of the island only has lowly ‘stewardship land’ status. However, a recent announcement by Conservation Minister Nick Smith suggests that soon the DOC-managed parts of the island (about 55 per cent of it) will become an ‘Aotea Conservation Park’. That would be fitting, as Great Barrier is a tramper’s paradise and in recent years DOC has upgraded many of the island’s tracks. It’s a surprise more Aucklanders don’t visit. 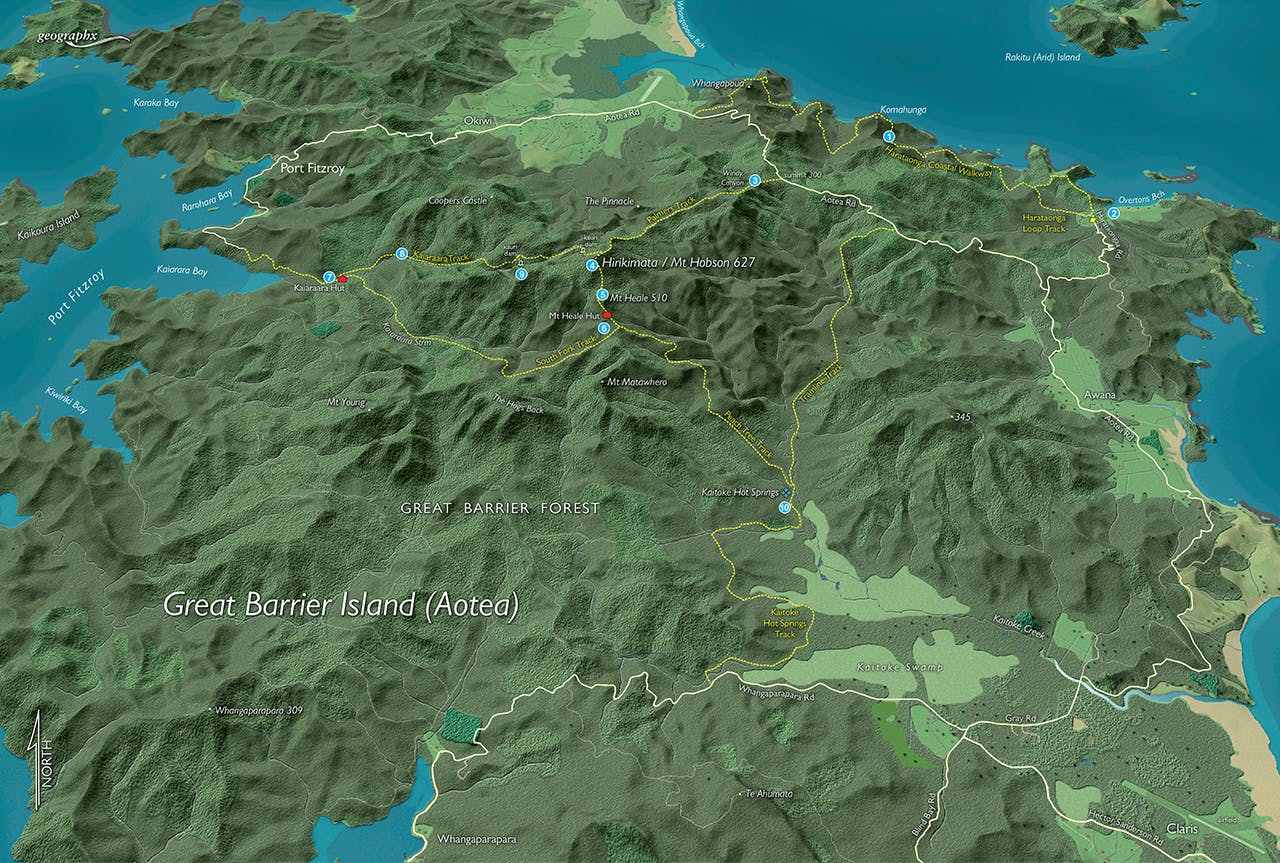 This 3.5hr walkway traverses coastal forest on the eastern side of the island, beginning from a signposted point off Aotea Road and ending at Overtons Beach. For those with less time or energy, the Harataonga Loop walk takes 30min.

Accessible from Harataonga Road, this basic DOC campsite has toilets, cold showers, picnic tables and a water supply. It has stunning views over the beach and nearby Rakitu/Arid Island.

Windy Canyon like the Earth has been cleaved open. Accessible from Aotea Road, a good benched track leads to the canyon, where a wooden stairway leads upwards, eventually becoming Palmers Track, which continues on to the summit of Mt Hobson/Hirakimata.

Hirakimata, the island’s highest point at 621m, has 360-degree views over the interior and beyond. Westwards, beyond Fitzroy Harbour, is rugged Little Barrier Island. The summit of Hirakimata is home to black petrels, which nest here during the summer. To protect vulnerable burrows, the tracks have been board-walked.

A spear point of a peak, Mt Heale, 510m, stabs into the sky a short distance from Hirakimata. It’s a significant landmark visible from many parts of the island.

Built by DOC in 2010, Mt Heale Hut has stunning views towards Little Barrier Island and the Auckland isthmus, as well as nearby Mt Heale. With two bunkrooms, a large living area and extended deck, the 20-bunk hut makes a great tramping destination and is one of two huts on the Aotea Track. It must be booked in advance.

7 Kaiaraara Hut
The other hut on the Aotea Track is the 28-bunk Kaiaraara Hut, an older Forest Service-built structure that DOC has renovated. It’s surrounded by bush near the Kaiaraara Stream and must be booked in advance.

8 Kaiararaara Track
From Kaiaraara Hut this track climbs steadily towards Mt Hobson/Hirakimata, getting steeper as it ascends, and with many sets of wooden stairs in places. An extensive upgrade by DOC in recent years has eliminated what used to be a slippery trail on clay soil.

9 Kairaraara Driving Dam
The main Kaiaraara Driving Dam, built in 1926, is the most intact of any remaining and one of the largest ever constructed in New Zealand. Reached on a short detour from Kaiaraara Track, the dam makes an impressive sight from the viewing platform. Higher up the Kaiaraara Track are the remnants of a smaller driving dam, now with only one upright in place.

10 Kaitoke Hot Springs
The Kaitoke Hot Springs steam slightly amongst the kanuka, upstream of the wetland formed by Kaitoke Creek. From a DOC information panel on Whangaparapara Road, a wheelchair-accessible track leads to the hot springs. Beyond, the Tramline and Peach Tree tracks lead up to Mt Heale Hut.