Golden Bay in the top left corner of the South Island is known for lots of things but mountain biking isn’t one of them. If you’re looking for a sea kayaking adventure, some coastal hiking, more hippies than Woodstock this is the place to be – but mountain biking? Really?

Yeah, really. It’s on and thanks to a cozy relationship between the local bikers and DOC, that affair is set to get consummated into a long term relationship. That relationship not only benefits bikers, trampers and local operators but could very well be the prototype for how it’s done elsewhere in the country.

Wilderness went to Golden Bay to see what was up and there was only one guy to talk to for the lowdown: John Etherington from Escape Adventures.

Before I’d even left Queenstown John had promised me that my mind was about to be blown and before I got back home I’d be shouting from the treetops, too.

John has assembled a ramshackle crew of outsiders to sample the scene. I was with Carl Patton the editor of NZ Mountain Biker and Derek Morrison from Australian Mountain Bike. John figured by inducting us into the fold we’d go away and tell all our readers that Takaka was the next big thing.

He picked us up from the airport – me from Queenie, Carl from Wellywood and Derek from Duds. We poured into his van and started the drive from Nelson International up the Takaka Hill. Straight into it we parked up at the summit and started to cobble our gear together. Bikes came out of boxes while John’s partner Mandy knocked together a lunch that made me, the jaded café snob, nod with approval. 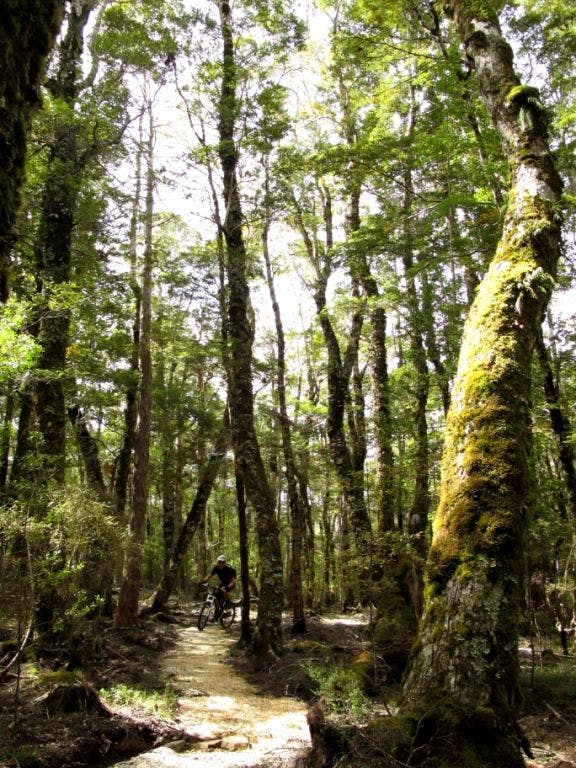 Gold Creek Loop Track near the start of the Rameka Track

After lunch it was on to the main course. First on the menu was the Rameka Track. While much of the thrust of the trip was to check out the new stuff, it’s always best to start with a classic. The Rameka Track has been on mountain bikers to-do list as long as there has been biking in New Zealand. I’d never ridden it and was amping to give it a spin. A whole generation of Kiwi mountain bikers have been brought up on purpose-built mountain bike tracks. Banked corners, boardwalks over the techie stuff and enough trail grooming to make you wonder if you actually need that suspension you forked out those extra dollars for. Not this track; this is old school.

Off-camber corners, roots, rocks – big ten-pin bowling ball rocks and lots of creek crossings. Between the four of us we had nearly 80 years of biking experience, but do you think any of us rode it without putting a foot down? Nope. The Rameka Track is a delightful return to the roots of mountain biking. It was tricky, but not impossible. Intimidating, but not scary. It’s the sort of track that you go home and tell all your friends about. It’s just that good.

The gradual descent of the track spat us out at the top of the jewel of the new developments in the area – Project Rameka. Perfect timing, finished with the old and on to the new. This new area starts from where the Rameka finishes – both geographically and design wise.

Where the old track wasn’t built with bikes in mind, this new stuff is. The corners are more manicured and there are a few wooden structures to have a play on. None of it was particularly hard, but that’s not the point, it was really good fun. The end of the project brought us back to sea level and down to earth, jaded but buzzing.

That night over dinner John introduced me to Greg Napp the local DOC community relations manager. Napp explained the rather unique relationship between DOC and the Golden Bay Mountain Bike Club. Instead of fighting each other, these guys are working together. The club builds mountain bike trails and then gifts them to DOC which maintains them with the help of local riders. Everybody wins – mountain bike trails built by mountain bikers and a system to maintain them so they are there for the long haul. 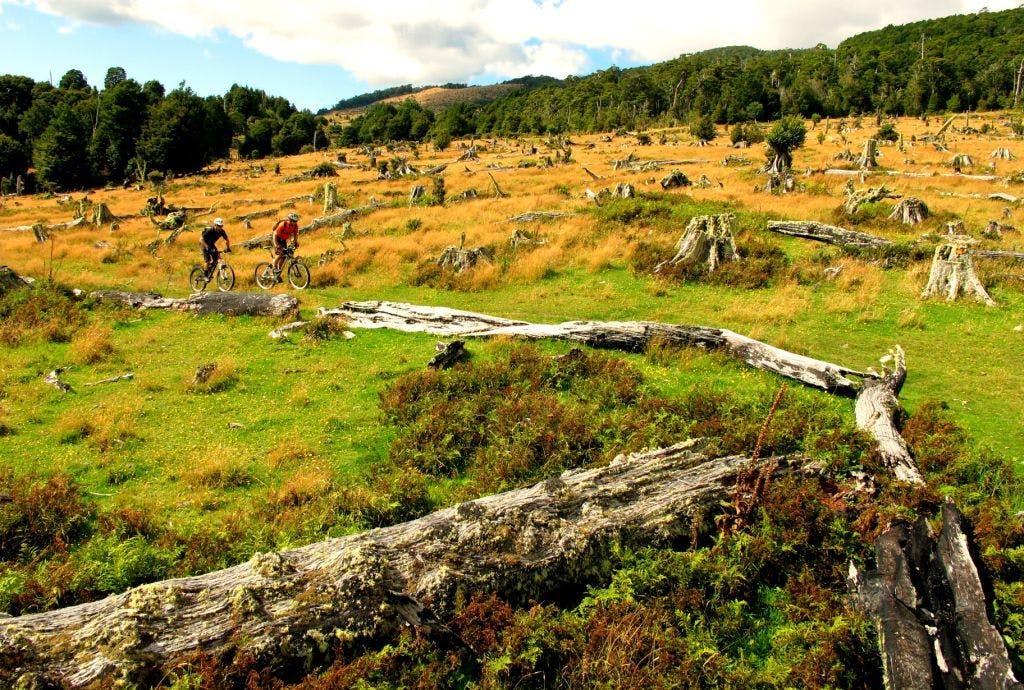 Golden Bay has a good variety of mountain biking options

DOC isn’t just talking the talk. It’s stumped up $10,000 a year for the last three years to help build and maintain trails in the area. “Things have changed at DOC,” Napp says. “When the idea of biking the Heaphy Track was brought up, there wasn’t any real opposition within the department.” It seems the days of bikers versus DOC are fading into memory.

Perhaps it’s the bohemian roots of Golden Bay but the secret to this harmonious relationship is a simple one – the two groups just keep talking to each other. Conversation reveals that the cultural difference between bikers, trampers and conservationists isn’t the vast chasm we’re led to believe.

Sipping wine at the Sans Souci Inn in Takaka we all raised a glass to what looks to be a very bright future for mountain biking in Golden Bay. But we didn’t go overboard: the next day was going to be another big one. John had more to show us and our Golden Bay tour was just getting started.

Our first stop the next morning was the farmers market in Takaka. Imagine every bohemian stereotype you can, put them all into the same car park and add a few more shoeless hula-hoopers and you’re about half way there. While sucking down strong coffee we plugged in to the local scene. A Hobbit lookalike asked us to come hunting for fairies in the forest and another invited us to a rave deep in the woods that night.

The plan for day two was to head towards Farewell Spit and scope the riding out that way. The sun was ferocious, and our shirts were glued by sweat to our backs before we even got on the bikes. Perhaps John’s vow that it’s always sunny in Golden Bay wasn’t off the mark.

Today’s selection was another DOC track that’s been recently opened for mountain bikers – the Old Man Range from Pillar Point to Triangle Flat. The riding started stoutly with a grueling climb from the car park to the high ground. Arcing 4WD track made for quick access to the views but left us huffing and puffing, regretting that last bottle of pinot from the night before. John offered up a pint at The Mussel Inn to anyone who could ride the hill clean. The competition was on.

Derek was laden with enough camera gear to make Ansell Adams jealous and was the first to succumb. Carl got convinced by Derek to pose for a photo and was the next to put his foot on the ground. Wilderness won on the day and despite wanting to drop to my knees and barf, the beer was mine. 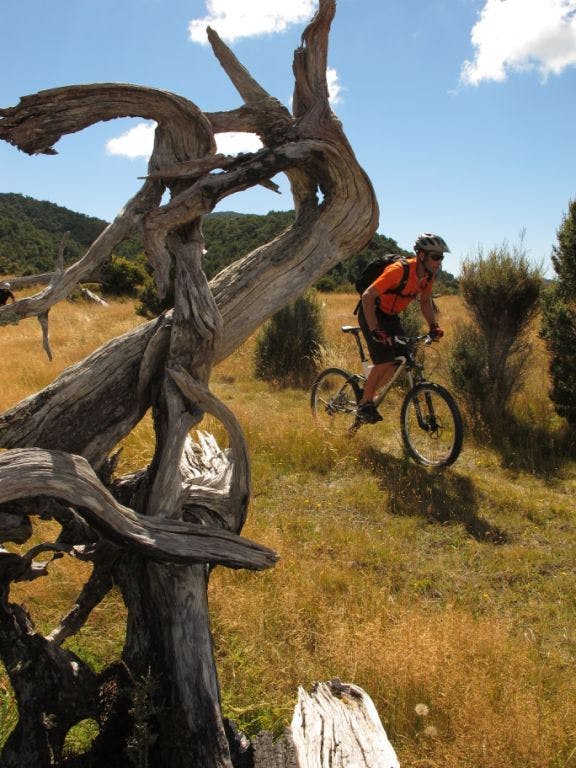 On the Canaan Loop Track

After regaining composure it was time to get some speed up. The single track down to the spit and the sea was amazing. Sections of slick rock reminded me of Moab, Utah and the views were as good as you can get. Twisting corners and fast descents all framed with views that made it hard to actually focus on where you were headed. Buzzing from the third awesome ride in two days we got back to the van fizzing for what’s next.

The final ride was the newest section of track atop Takaka Hill. Parking in the spot for the ride on the Rameka Track, this time we tackled the Canaan Loop Track – yet another DOC special. This new track built for mountain bikes was once again outstanding as it passed through tight trees, open meadow and everything in between.

Hooting and hollering we locked up the brakes and came to a skidding halt at the van. John was standing there with a big grin on his face. “Well, what do you think?” he asked.

Just as predicted by the time we left Golden Bay I was singing its praises to anyone who would listen. The real triumph here isn’t just good mountain biking – what’s really inspiring is the relationship that’s been formed between the local riding community and DOC. Two groups that don’t always see eye-to-eye have formed a partnership to build and maintain tracks for mountain bikers that will stand the test of time.

Mountain bikers are just like trampers – we don’t want tracks everywhere, we want quality over quantity. One great track is worth its weight in gold and in Golden Bay, they’ve struck it rich.

Access The Rameka Track, Project Rameka and The Canaan Loop are all accessed from the top of the Takaka Hill, 1hr drive from Nelson; Pillar Point to Triangle Flat is reached via the Whararaki Road