In a country blessed with a fantastic diversity of coastline, it’s hard to think of a place with more wild beaches than Stewart Island. And no other track covers such a long stretch of New Zealand’s coastline than Stewart Island’s epic North-West Circuit.

Around the half-way mark is East Ruggedy Hut; something of a Shangri-La on the journey. It’s one of those places that invites weary trampers to linger a little longer and many people decide to spend two nights here enjoying some of the best landscape Stewart Island has to offer.

Just 30 minutes from the hut through some typical Rakiura podocarp forest is West Ruggedy Beach. Here the prevailing westerlies consistently beat across the rocks, dunes and forests and give the landscape a sense of being constantly alive.

To the south, the Ruggedy Range rises up out of the sea and gives this part of the coast an uncommonly grand aura.

Heading back to the hut, keep an eye out for Stewart Island kiwi; you just never know when you will run into them in this place. If you don’t see one, it’s 100 per cent guaranteed that you’ll hear one later at night. 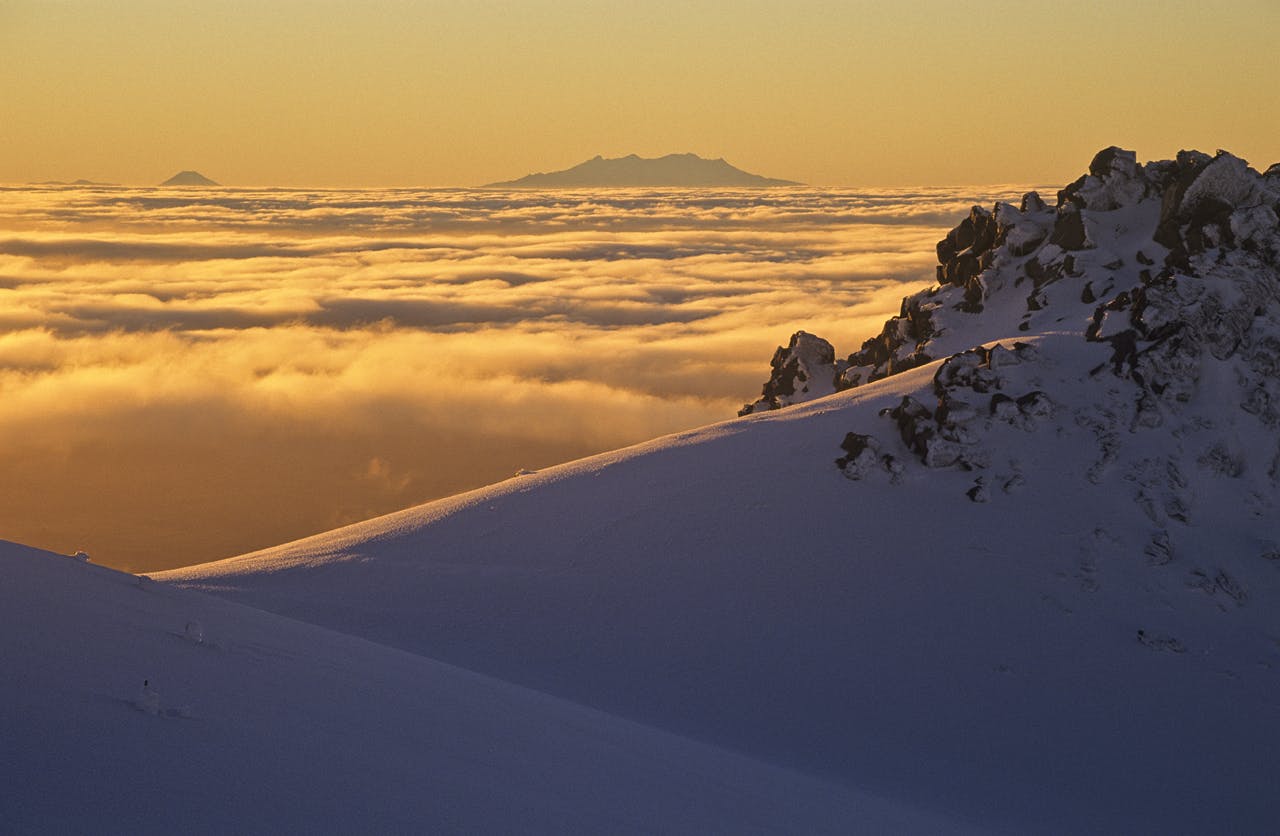 During summer, Syme Hut occupies a surreal moon-like landscape on Fantham’s Peak, dominated by the wide southern slopes of Mt Taranaki. In winter, however, the place becomes a frozen wonderland, with the hut often coated in fantastical ice formations.

Exposed and high (1950m), the hut is no place to visit during bad weather, but during more benign conditions makes a superb alpine destination for trampers and climbers alike. The existing hut, built in 1988, replaced an earlier hut constructed in 1930 by the Mt Egmont Alpine Club, whose founder Rod Syme was a man of extraordinary talents and energy. Syme pioneered a new route on Mt Tasman, known as Syme Ridge, during the 1920s, and over his lifetime climbed Taranaki 227 times.

Syme Hut (12-bunks) is reached after a demanding 1000-metre, 4hr climb from Dawson Falls, on the mountain’s south-eastern slopes. 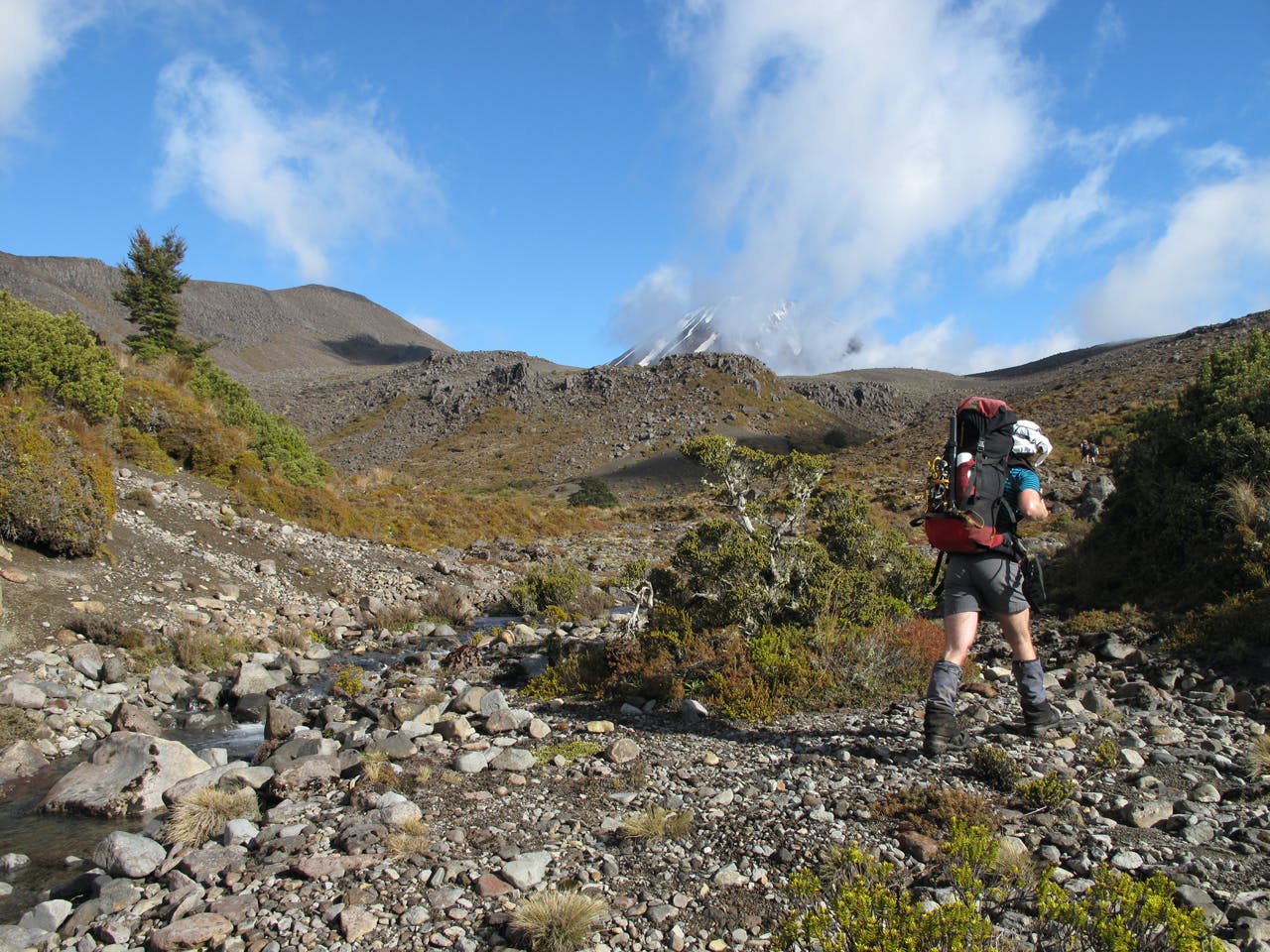 Tramping up the Waihohonu to reach the campsite. Photo: Richard Davies

The Tongariro Alpine Crossing and Northern Circuit are well known and much-loved ways to enjoy the national park. Sometimes though, it feels like you are sharing that special place with just too many people. The huts can be crowded and impersonal.

For those keen trampers looking for a little solitude, there are some special places – you just need to get off the beaten track.

In the head of the Waihohonu, on the flanks of Tama Ridge, between Pts 1154 and 1163 there is a patch of beech forest that has survived the cataclysms that have shaped the park.

The flats in front of this make a perfect place to pitch a tent. A burbling stream, a patch of beech forest, a soft campsite and the feeling that you’ve got the park to yourself – not an uncommon feeling in many parts of the country, but one not usually associated with Tongariro.

Access From SH1, take Waihohonu Track to Waihononu Hut. Leave the track here and head up valley, aiming for Tama (1623m). About halfway between Tama and the hut are the flats
Time Two days
Map BH34, BJ35 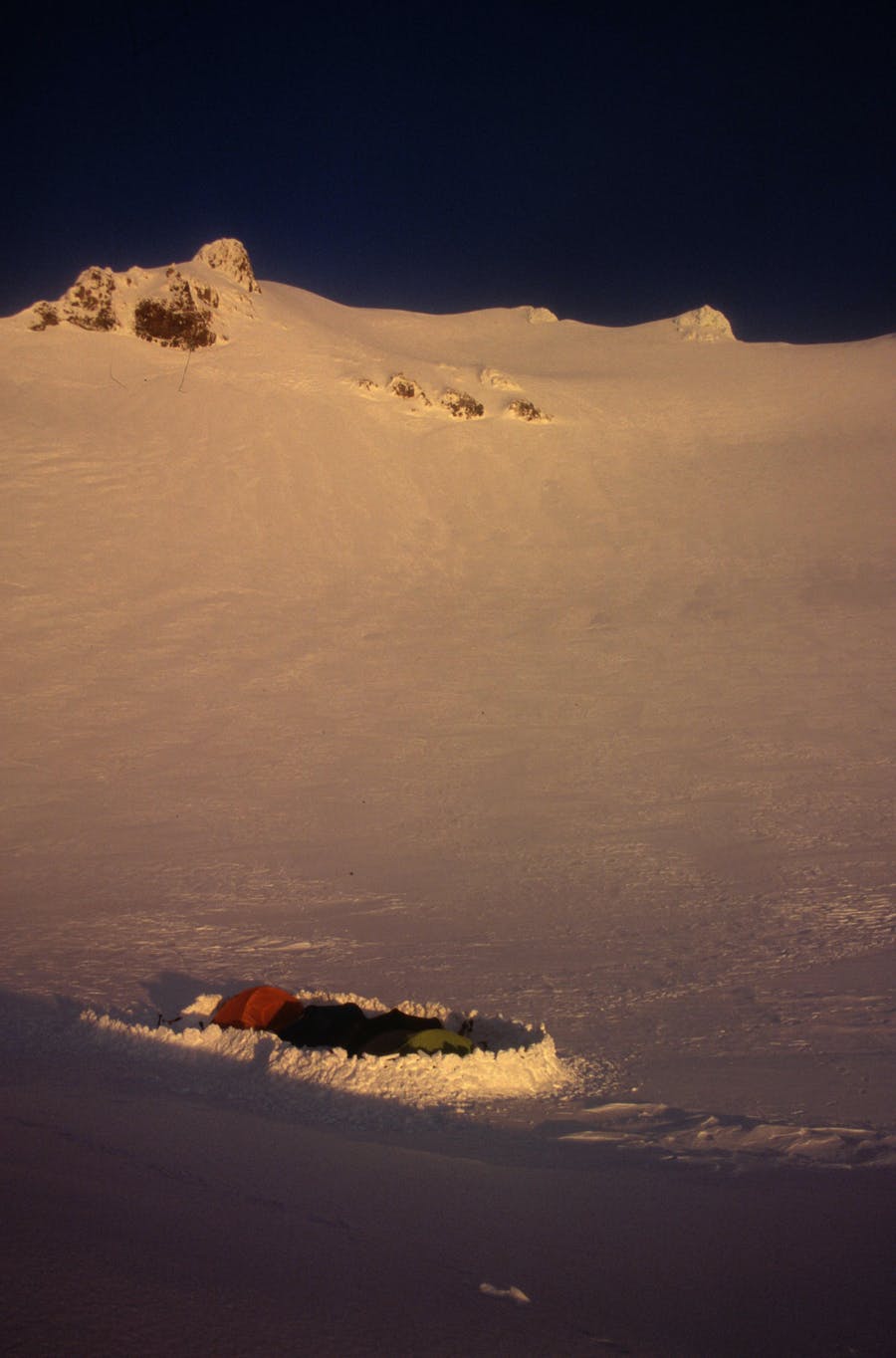 There are any number of great trips to be completed in Tongariro National Park, but the upper Wahianoa is a special place to camp and is easily accessible from Turoa ski field.

It is a fun trip on skis or foot up the Mangaehuehu Glacier to the ridge between Tahurangi and Girdlestone. Once on the ridge you turn your back on the crowds and ski field infrastructure and look into a wild corner of the park. Ringed by Girdlestone, Tahurangi and Ringatoto, the Wahianoa Glacier is infrequently visited. It can be a little bit steep at the top but it quickly turns into a spectacular descent. At about the 2450m contour there is a flat bench that makes for stunning camping.

Below, the glacier drops to a larger bench and further down are the bluffs of the Wahianoa River. Above, Ringatoto Peak is easily reached from here.

If you don’t want to retrace your steps there is an enjoyable route back to Turoa circumnavigating Girdlestone Peak between the 2200m and 2300m contours. 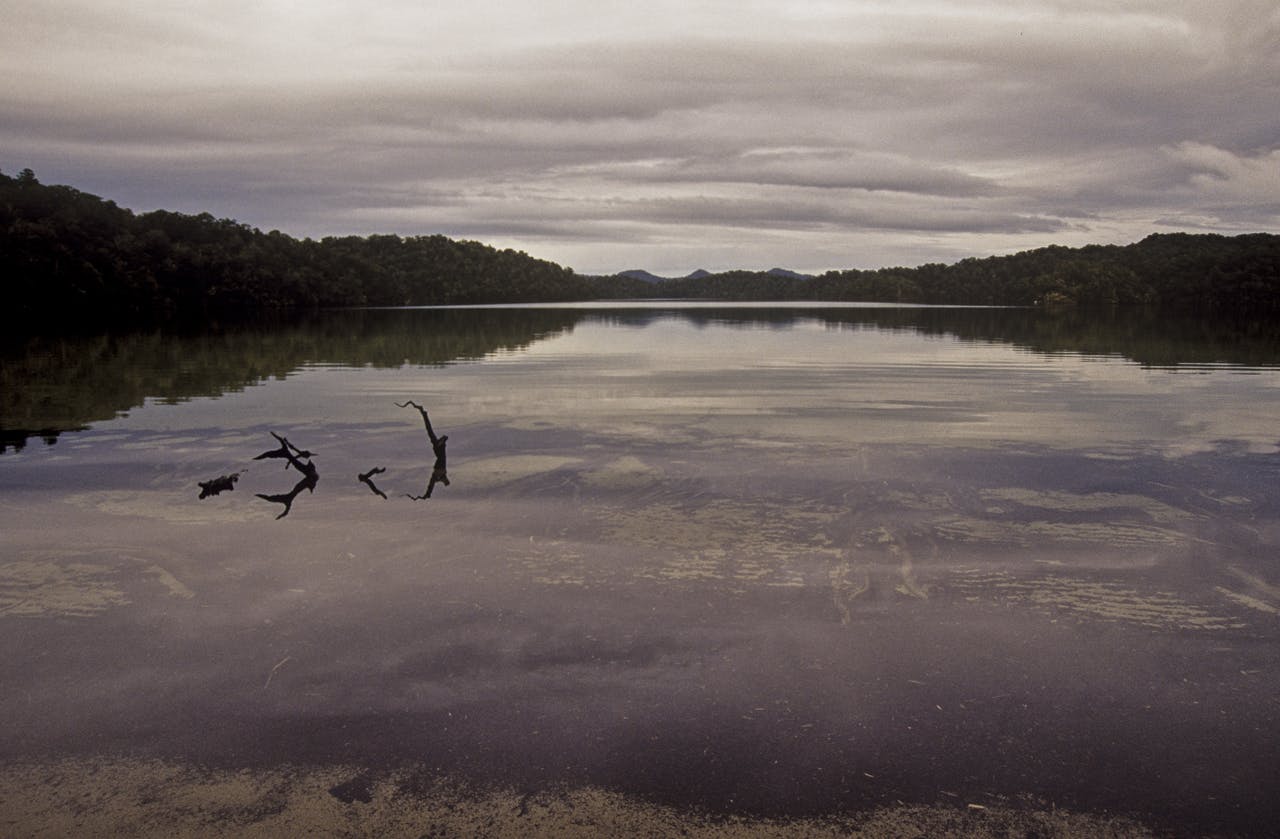 Smaller and more intimate than its larger neighbour, Lake Waikareiti offers quiet tranquility to trampers with its shores overhung by beech forest. The area was once the scene of devastation when a huge landslide created a dam behind which the lake formed. Though small, the lake has islands, one of which even boasts its own small lake.

Sandy Bay Hut, located at Sandy Bay on the lake’s north-eastern shore, offers refuge, but must be booked in advance through DOC. Trampers can reach the 18-bunk hut in three ways: the Waikareiti Track, which is the standard track in; the longer track past Lake Ruapani; or from the shelter on the lake’s southern shore – you can row across in a dinghy (available for hire by DOC, keys obtainable at the Aniwaniwa Visitor Centre).

Reaching the hut from the Aniwaniwa Visitor Centre takes 3-4hr on the main track, or 6-7hr on the Raupani route, which passes several small lakes and other delightful wetlands. 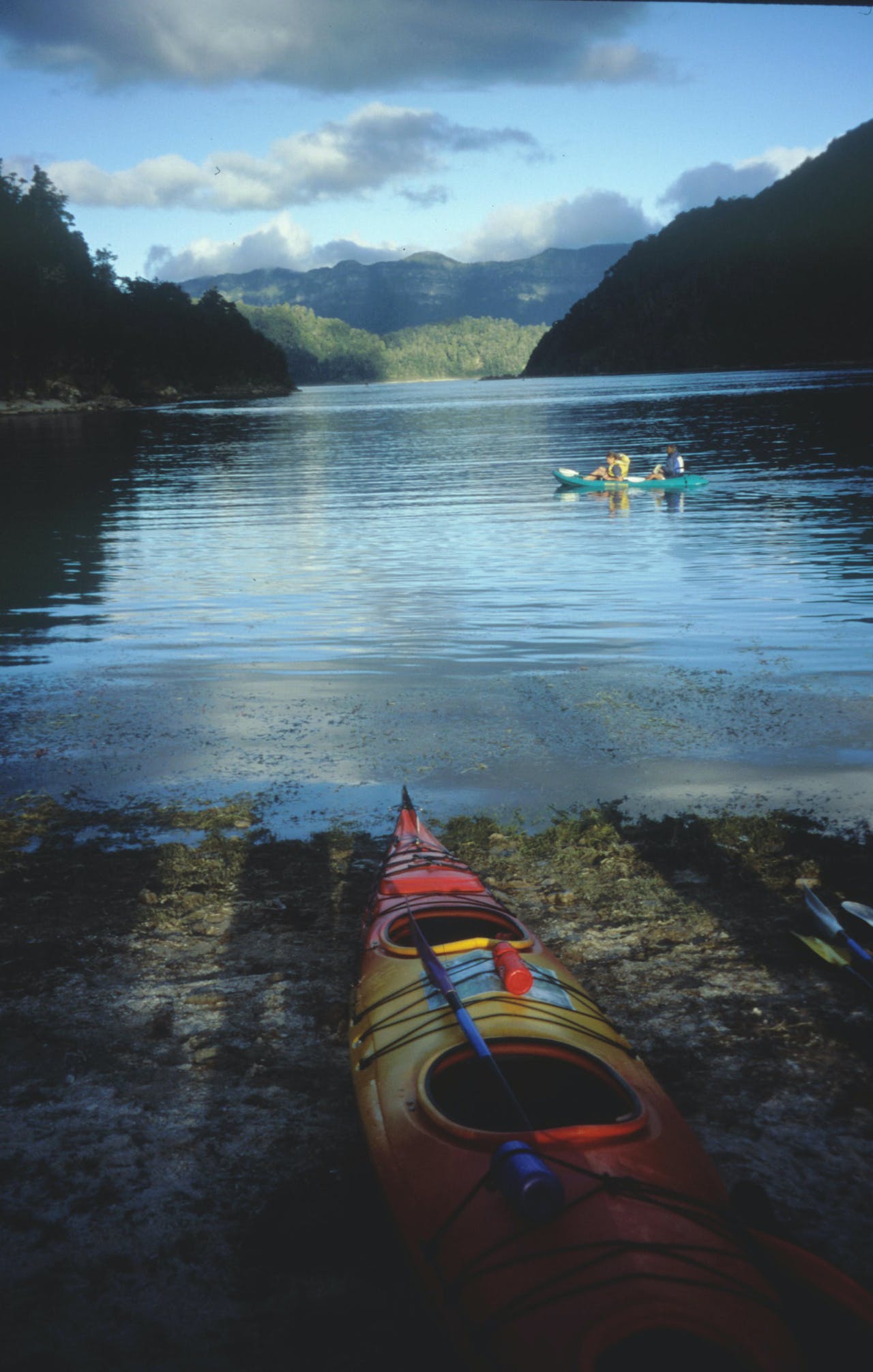 With a multitude of campsites, kayaking Lake Waikaremoana is an alternative way to see the park. Photo: Richard Davies

The magnificent forests and deep valleys of Te Urewera are steeped in human history, and any trip here will deliver a palpable sense of adventure.

However, for a tramper, the forest envelopes everything and it can quite literally be hard to see the wood for the trees. But by taking to Lake Waikaremoana in a kayak you can enjoy the forests and wildlife of Te Urewera from a unique viewpoint. With the numerous campsites, and interesting features to visit along the track you can easily spend four days exploring the lake.

It is easy kayaking, wonderful swimming, and you’ll be rewarded with loud birdsong (including kiwi) and a truly unique experience. 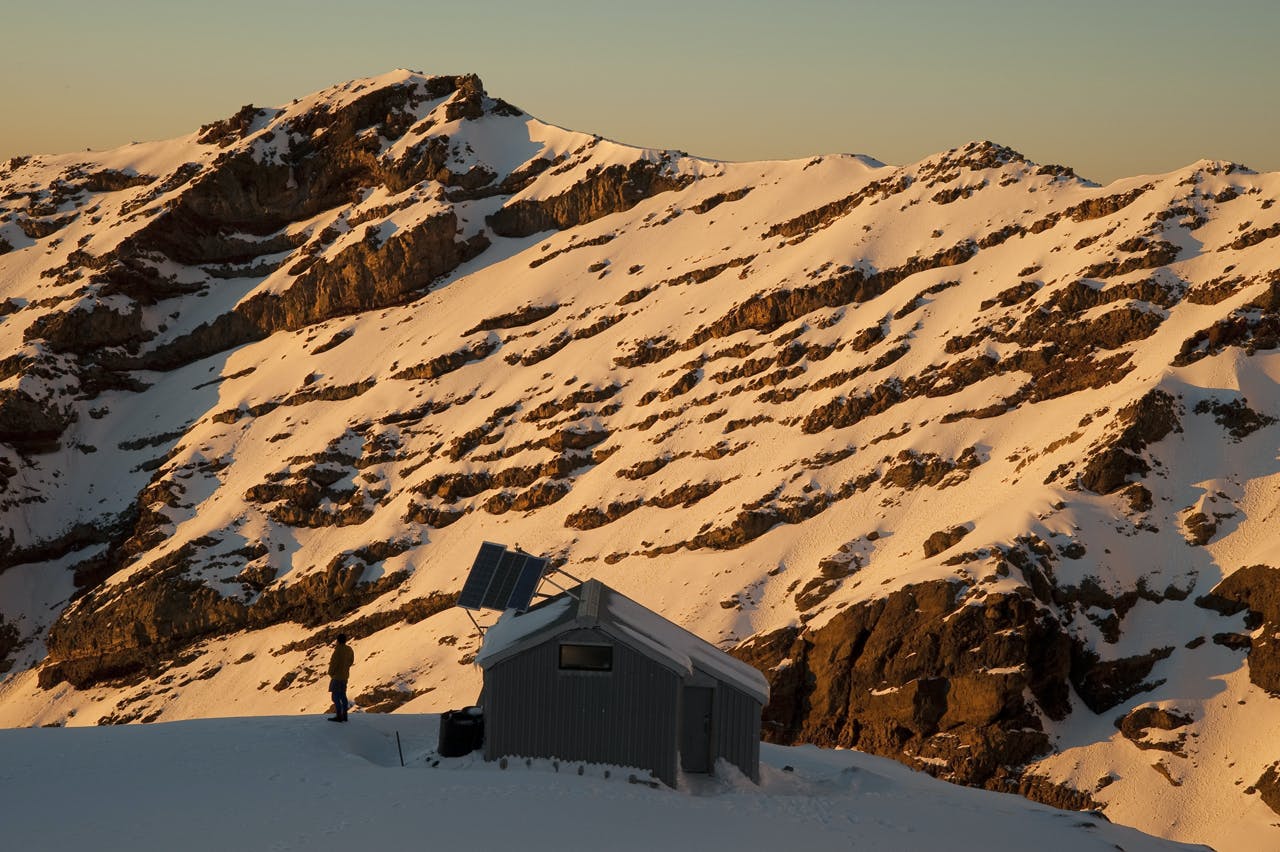 Mt Ruapehu’s eastern side is much under-rated and under-populated. Aside from the modest Tukino ski field, there is very little of the development that so dominates the mountain’s western flanks at Whakapapa and Turoa.

The Whangaehu Glacier spills from Ruapehu’s summit, near the Crater Lake, forming a path that has seen numerous lahars during past volcanic events, including the one that caused the 1953 Tangiwai rail disaster, killing 151 people. DOC and local bodies carefully managed the most recent lahar in 2007 to ensure no loss of life.

Sitting perched on a small shelf at 2060m above the Whangaehu Valley, the New Zealand Alpine Club’s Whangaehu Hut has the distinction of being the North Island’s highest hut. With its lofty perch, the eight-bunk hut offers a great base for climbing, or just enjoying the fine views of Pyramid and Ringatoto peaks, and the Kaimanawa Ranges.

Built by the club in 1964, the hut was officially opened by Ed Hillary and recently had an extensive makeover. NZAC members get priority of use, but the hut can be booked by others for $10/night per person (check www.alpineclub.org.nz for details).