Your votes and been counted, and the 2019 Wilderness Reader’s Choice Outdoor Awards have come down to the wire. But there can only be one winner in each category, so without further ado, here are this year’s winners.

Bivouac: Chain Retailer of the Year
Runner up: Macpac

The world seemed a much bigger place when Bivouac opened its foundation store in Christchurch.

The year was 1986, and outdoor gear was hard to come by in New Zealand.
CEO Wayne Martin remembers there being just one man in Auckland who sold carabiners – the idea of a one-stop-shop for outdoor gear was almost unheard of.

Stores were computerless, run on pen and paper, and new products had to be picked up at international trade shows in Europe or the US.

Today, Bivouac has 10 stores and one outlet shop open across New Zealand and stocks dozens of world-class outdoor brands, but, for all that has changed, Martin says, “the basics are still the same”.

And Bivouac is doing that well – this year marks the fifth time Bivouac has won the chain retailer category, and Martin is “very pleased” to retain the title.

“The competition has become a lot stronger in New Zealand, so I don’t take it for granted,” he says.

“We’re lucky that our core customers are outdoors people – the same people who buy Wilderness magazine.”

Martin says the constantly improving weight and comfort of products has been the biggest trend he’s noticed during his time in the industry.

“In my day, we piled up leaves and grass and slept on that. Then came the first sleeping mats, then the Therm-a-Rest, and now there are plenty of thick and comfortable choices – people are a lot more comfortable these days,” he said.

As for Bivouac’s future, Martin says he has no plans to open stores across the ditch any time soon – but he is keen to keep winning the Wilderness Outdoor Awards. 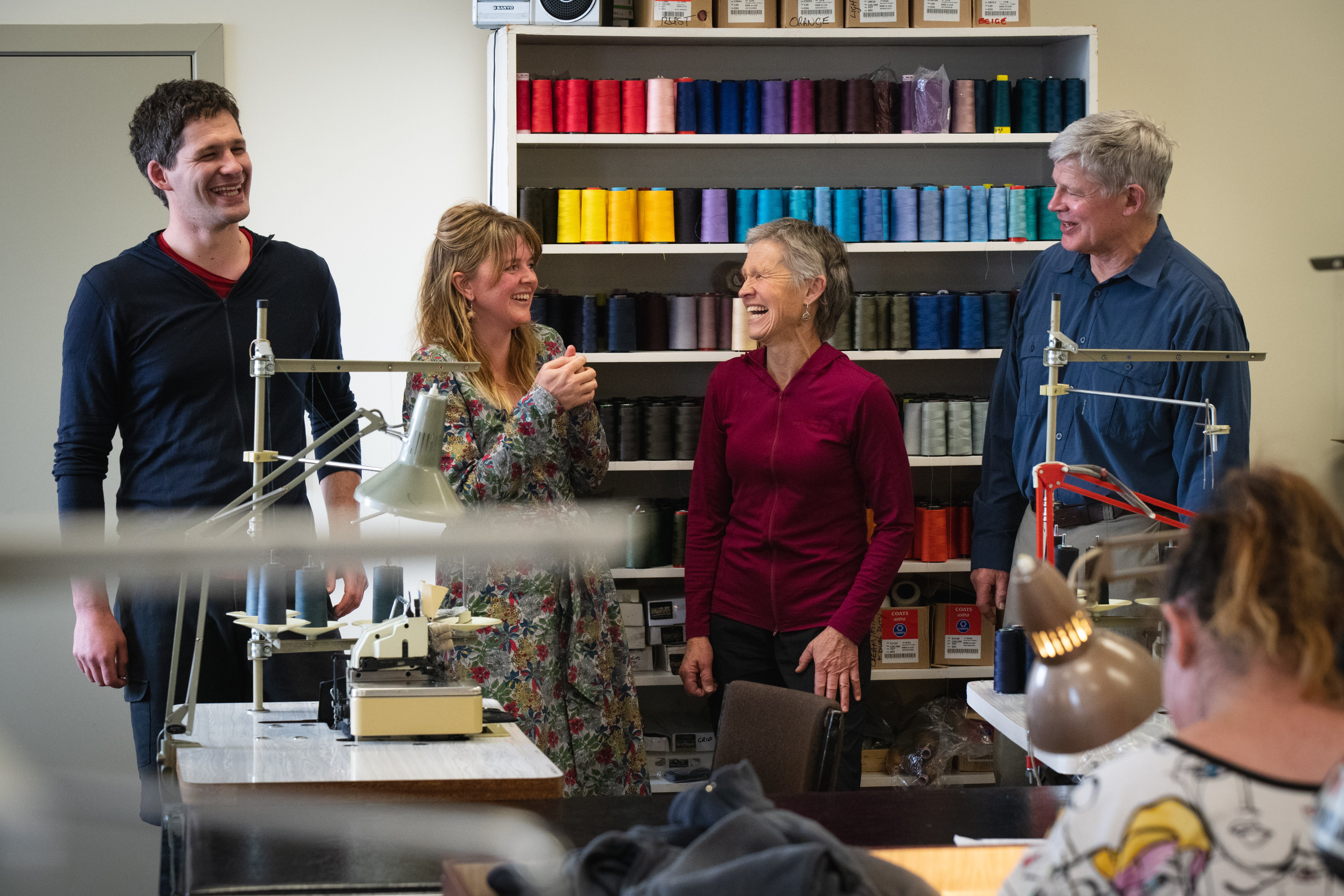 Sustainability is front and centre at Earth Sea Sky HQ in Addington, Christchurch.

Fabric scraps on the workshop floor are collected for re-use, shipping bags are biodegradable, and a bucket on the kitchen counter is constantly filling with compost.

It’s a point of pride for the Kiwi-owned business, as is winning Brand of the Year for the second year running.

“We’re not the biggest business on the block, but we’ve got the passion and we love what we do,” operations manager Jane Ellis says.

“[Winning the award] feels like someone has just said ‘hey, you’re doing a good job’, and like anybody, we will respond to that. It’s really motivating.”

The business is a family affair – Jane’s husband David is founder and ‘head honcho’, and their son Michael is a jack of all trades around the office.

Jane says the family tries not to take work home (and vice versa), but the family-feel runs deep in the business.

The small scale of operations means everything from designing patterns to snipping loose ends on a finished garment can be done in house.

This allows customers a level of customisation in their purchases – an extension of the sleeves for a long-armed tramper, or a printed logo, for example.

It also allows the company to keep a close eye on sustainability.

“We invest a huge amount of time in making sure we have the best possible fabrics and components that are going to work and last, not just throwaway,” Jane says.

Jane believes personal touches, and the ability to produce gear that’s designed, made, and tested in New Zealand gives the company an edge.

“People are becoming more aware of buying local and what that means – it’s good quality, and it also means supporting local people,” she says.

“One thing we are really proud to be doing is creating jobs for New Zealanders.” 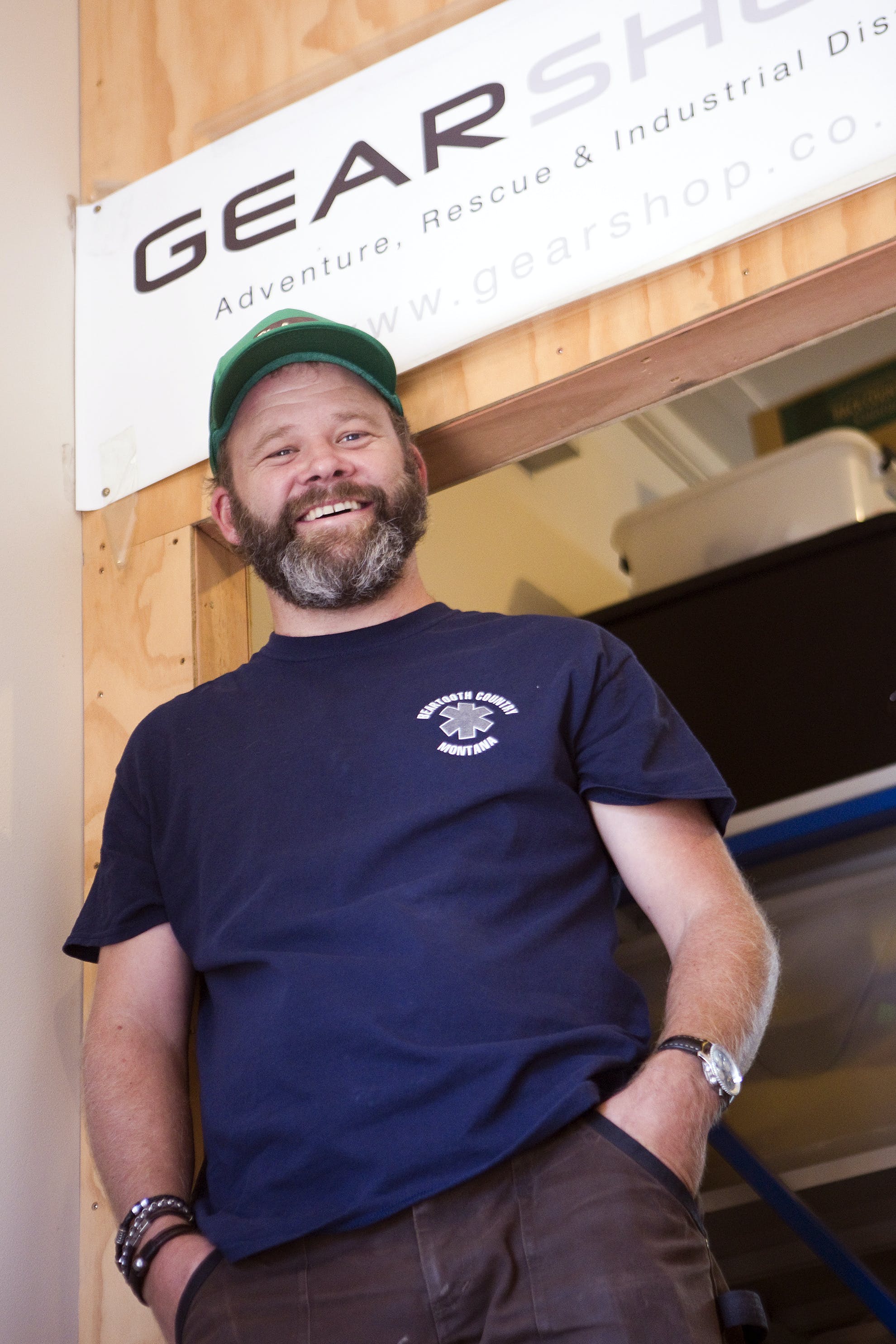 Gearshop: Online Retailer of the Year
Runner up: Bivouac

Gearshop is going from strength to strength.

Since its beginnings in 2013, it’s tripled in size – and it’s set to keep growing.
Owner Hamish Pirie says the next few months will be spent expanding the warehouse to accommodate new stock, and building domestic websites for top-selling brands, such as Big Agnes.

Its Gearpoints loyalty programme has awarded more than a million points to customers, and they keep coming back.

For the second year running, Gearshop has won the Online Retailer of the Year award – proof that its growth isn’t affecting customer satisfaction.

“It proves we’re still doing things the right way and getting a good response from customers – obviously people are happy,” Pirie says.

Gearshop hasn’t always been an online retailer. It started life in 2006 as Altitude Outdoor – a specialist outdoors store in Nelson.

In 2010, Pirie started pushing online sales in a big way, and in 2013, he pulled out of retail altogether to focus solely on web sales.

Now unrestricted by retail hours, Pirie splits his time between running Gearshop and his car rental business and working with helicopter firefighter units in Australia.

He says there are plenty of benefits to being an online business.
“We can be open 24 hours a day, seven days a week, and people have the convenience of ordering from home, or from anywhere on the planet,” he says.

It isn’t as easy or as cheap to run as people assume, however.
“I’d spend as much on the website as someone leasing premises in downtown Auckland, and anyone running an online company will say the same thing,” he says. Further Faster hasn’t been on the scene long, but it’s already part of the furniture for the Christchurch outdoors community.

Like a backcountry hut, it’s a place where like-minded enthusiasts meet, hang out, and discuss the great outdoors.

It’s co-founders Martin Walker, wife Julz and Dan Farber have worked hard to make Further Faster feel like a community hub, and it seems to have paid off.

Despite only opening in 2016, the store has beaten strong competition to win Independent Retailer of the Year.

It’s a store where staff members remember your name, there’s always an event in their calendar, and dogs are more than welcome.

The shop dog and mascot Badger is a particularly popular member of the team, and loves pats from customers.

At 5pm on Fridays, Walker and Farber host ‘Beer O’Clock’ reviews on Facebook live, reviewing craft beer and outdoor gear, and movie nights and talks are frequently held upstairs amongst the kayaks and packrafts.

If you pick your day right, you may even get fresh baking on your visit.

The store is a marriage of Farber’s old store Long Cloud Kayaks and Walker’s home-run online store and wholesale business.

The pair – who each have a long history in outdoor gear – decided to open a combined store, which they found on a random drive through the city.

Walker says the store’s homely touches and passionate, knowledgeable staff are a reason for its success.

“It’s a rare thing these days where big stores are taking over for whatever reason – I like to think we offer a better service and a more interesting array of products,” he said.

“And everybody here is actually going outside.” 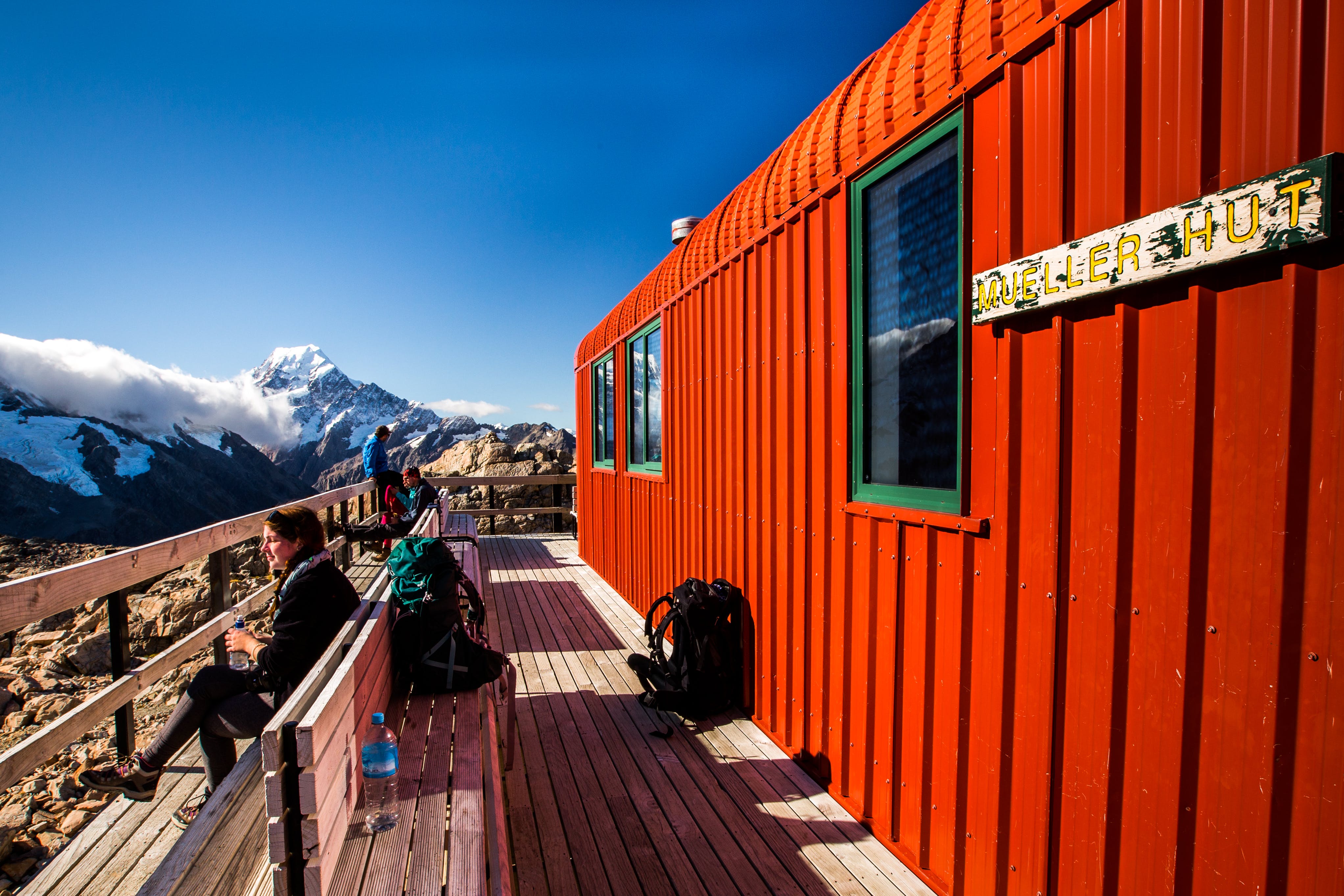 There was but one hut in the running for the 2019 Hut of the Year award.

Blowing away the competition with a third of all votes, the spectacular Mueller Hut was never in doubt for the prestigious title.

Perched 1800m up on the Sealy Range, the iconic firetruck red hut boasts incredible views of Aoraki/Mt Cook and surrounds.

The original hut was built in 1914, and the current hut is the fifth to bear its name – the previous huts having either deteriorated or been lost to avalanches.

The current 28-bunk hut was opened by Sir Edmund Hillary in July 2003.

It’s a special spot for Sir Ed, who attained his first summit on Mt Ollivier – right behind Mueller Hut.

Aoraki/Mt Cook National Park operations manager Brent Swanson says the hut’s accessibility and views are the reasons it’s booked up most days of the summer season.

“Within three hours you are in an alpine environment with majestic views of the park, the glaciers and Aoraki,” he says.

Despite its steep and potentially dangerous terrain, Swanson says visitors are usually well-prepared and don’t tend to get caught out.

“Fortunately at the road end there is the visitor’s centre and because it’s a bookable hut, most people come in and talk to us before they go,” Swanson says.

While it’s possible to make a return trip to Mueller Hut in a day, the sunrises are “spectacular,” Swanson says.

The 5.2km track to Mueller Hut takes 3-4 hours in summer, and around five in winter.

Bookings are required year round through the DOC website, and a bunk costs $45 a night. 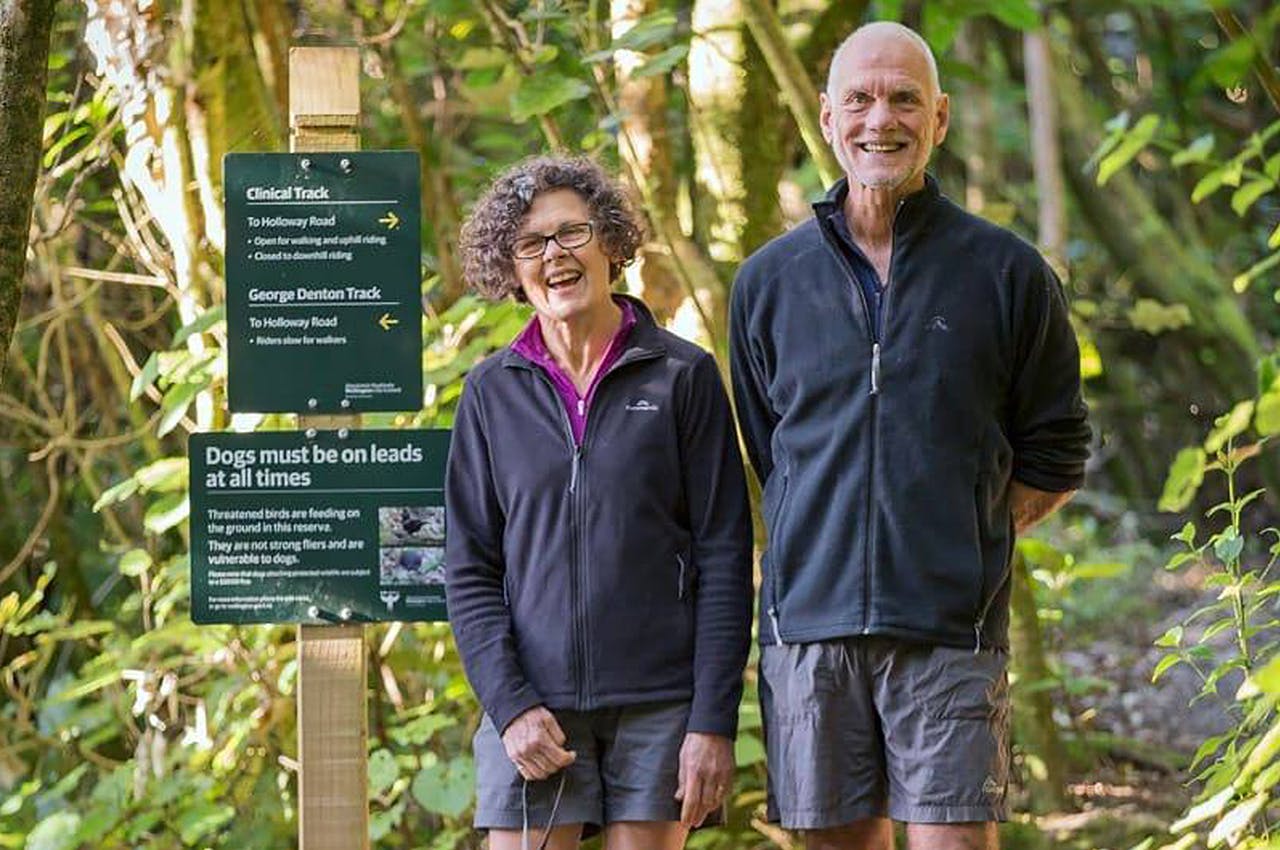 Geoff and Lisa Whittle were nominated for conservation efforts in
the Ruahine Ranges. Photo: Amanda Rogers

Lisa and Geoff Whittle moved to Wellington from Tasmania more than 25 years ago, and have made a solid impact in conservation.

Over the last seven years, the couple has ventured into remote parts of the Ruahine Ranges nearly 50 times to maintain 16km of traps.

Their efforts have helped whio, kiwi and other native fauna to recover from predation.

Lisa and Geoff were unable to be reached before deadline, but we plan to profile them in greater depth at a later date.