How young is too young to get into the outdoors – and who’s best to judge the risk? Francine Church reports

One beautiful spring day, I hiked up Whakapapa Glacier with another experienced alpine climber/backcountry skier and his two children aged five and seven.

Most of the way we had the youngsters roped on so we could tow them on their skis. Sometimes they cramponed, briefly, waving ice axes and poles around excitedly.

We reached the Whakapapa Col, took happy selfies with the Crater Lake in the background at a safe distance, and enjoyed an epic ski descent in soft snow.

Nine days later, the father was served with a court application from the children’s mother seeking full custody due to the ‘unsafe’ nature of the trip.

It was then downgraded to an application to restrict him from taking the children out of the region where they lived and disallowing any future ‘mountaineering’ activity. He’d have to front up to court to defend himself and his right to take his children into the outdoors as he saw fit.

And I began to explore the nuances of the dance that is done by those with broken relationships and, with children in the middle, made more fraught by two parents whose appetite and tolerance for risk are at opposite ends of the spectrum.

A day out on the snow

We’d often discussed taking the children to Crater Lake. It’s a beginner-ish thing to do on Mt Ruapehu and is only graded one on the New Zealand alpine system – though it’s more like ‘grade 0’.

The Whakapapa Glacier is low-angled terrain, the lifts extend to 2300-2400m leaving just 300m of ascent and making it easy to manage and mitigate risk.

The avalanche forecast for the day had the risk rating above 2300m as ‘low’. We packed avalanche gear, crampons, ice axes, harnesses and a rope. You don’t need a harness and a rope to get up the glacier, but it helps to tow the children.

They loved it. The scenery, the adventure, the joy of being towed up a mountain and not having to do anything.

Reaching the top, Little Miss stayed tied onto the rope while Master Climber practised his advanced mountaineering ‘skills’. Snacks were had, selfies taken, then we enjoyed an epic descent. Many other punters were making their way up as we skied down, and they were surprised to see two children giving the snow a caning. 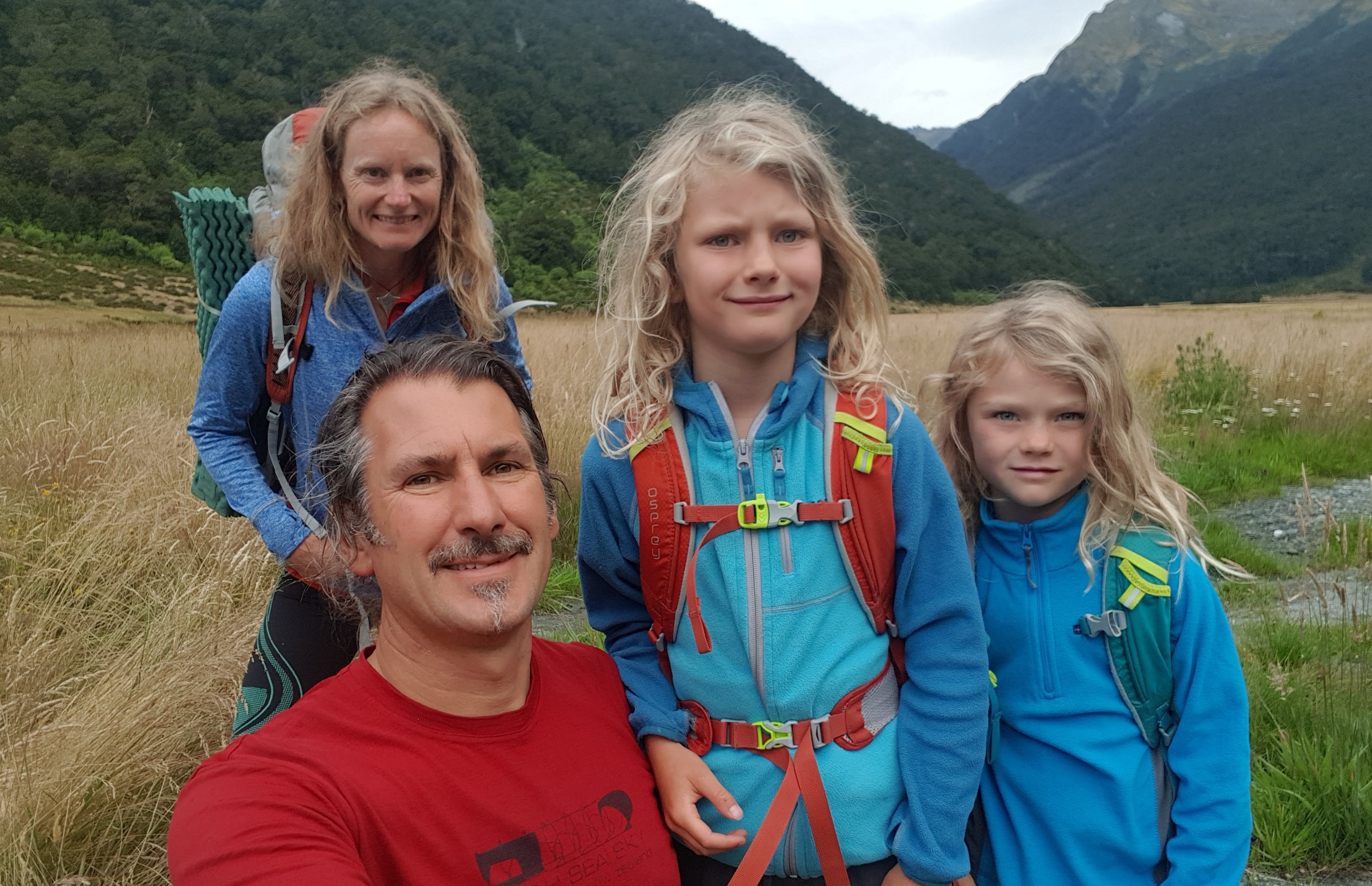 Parents Christine and Erik Bradshaw adventure together with their children Tyge and Kaya. Photo: Erik Bradshaw

Just two days before receiving the court order, the father and I watched a video by Erik Bradshaw, a well-known ski tourer and climber. Bradshaw takes his young children ‘ski adventuring’.

He was the first person to complete a ski traverse of the Southern Alps and is enthusiastic about getting children into the outdoors from a young age. “I hope this inspires people to get out and enjoy spending time in wild places with their kids,” he says in his video.

But comments on the video indicated that not everyone shares his philosophy. The opinions run wide and strong. Never mind that Erik is incredibly experienced, does all the hard work, and the video clearly shows it’s being done quite close to civilisation.

‘This is beyond the limits of stupidity, taking a small child that hasn’t even developed the life skills to stand, walk, talk or even comprehend life, in the local park into the extremes of the alpine environment… putting their life and yours at unneeded risk,’ said one. ‘I have had my daughter in backcountry huts and lodges since she was three years old but there is a limit.’

Said another: ‘I think the point here is not the very young child’s ability to learn outdoor skills but rather the competency of the parent to introduce them to the outdoors in a safe way.’

And another: ‘I completely disagree, many families have taken a ‘baby comes too’ approach to adventurous lives… it doesn’t mean the child needs to be able to light a fire without matches and hunt its own food.’

But that’s often the way with getting children into the outdoors – many people simply think they don’t belong there.

Bradshaw couldn’t disagree more: “My happiest memories from childhood are the outdoor adventures I did with my parents. This was because my parents were at their happiest, away from the stress of the day to day juggling act of work and shepherding kids. The resilience, character and unique sense of self I developed in the outdoors has helped me a lot in life, especially in my late teenage years when drinking too much and being socially reckless was the way to social acceptance.

“There is no safe place on this planet,” he adds. “The risks presented by nature such as river crossings, falling, avalanches or hypothermia are much easier to understand than the accepted societal risks of digital addiction, alcohol, bullying, drugs, suicide or reckless sexuality.

“People who don’t know me may consider me to be a reckless father, but I work on the big picture – I want my kids to be strong and robust when I am not there. They need to learn how to manage risk and not run away from it.”

What’s really heartening is when things come together. Club members, friends, like-minded individuals who cohesively make things happen and introduce children to the outdoors. It’s the best of New Zealand ingenuity, innovation, outdoorsy-ness and ‘can do’ spirit all wrapped into one big happy snowball. We saw plenty of those on our trip to Crater Lake.

– To protect the identities of the children mentioned in this story, the author’s name has been changed. The author has donated her writer’s fee to Ruapehu Alpine Rescue Organisation, in recognition of the excellent work they do to help people.

Chris Auld is a qualified ski guide and former Ruapehu patroller who’s taken his children (six and eight) into the backcountry both in New Zealand and Japan.

“The key to a safe and successful time in the backcountry with younger children is excellent terrain and route selection,” Chris says. “There’s a reason that most North Island skiers, like my childhood self, had their first backcountry experience climbing Whakapapa Glacier to the Crater Lake: It’s very manageable from a risk point of view.”

Chris provides a few tips for adventuring with children. Know the area and make sure that you’ve been there previously. “I like to inspire youngsters with tales of exploration, but I’m only ever going on slopes that I am super familiar with.”