Spend enough time in backcountry huts and you’re bound to meet some interesting people. Rob Gerard shares some of his hut tales

Worst night ever in a hut

We arrived at D’Urville Hut on the edge of Lake Rotoroa to find two men – 50 and 18 years-old – drinking beer outside. We said hello and established they were staying one night, and had no other plans.

Inside, there was one pack on a mattress and another on the floor. After a while, the two came into the hut and I asked the older man if the younger was his son, but he said, ‘No, he’s my friend’. Fair enough, but a simple introduction would have been preferable, I thought.

The encounter was quite awkward and I was relieved when they boarded their boat and went fishing. They returned with a fish which necessitated more beer to celebrate. The celebrations continued until we and another arrival, who was five days into a long tramp, were all settled into our sleeping bags. After a while, my tramping partner went to the door and suggested they should eat.

As darkness descended, a couple of hunters arrived and they too settled down to sleep. Then, the door flew open and a loud crash reverberated as the fishermen dropped their cooker. We had a lucky break at this stage as they decided to cook outside but regrettably continued their drinking. Loud drunken voices filled the hut and my partner again went to the door and suggested we all wanted to sleep and weren’t interested in their expletive-filled ramblings.

I was far too angry and frustrated to be able to sleep. This was a new experience as I had never suffered from hut rage before. Eventually, they came to bed. Within minutes, the older man’s drunken snoring reached record decibel levels, which continued for an hour or so before they subsided into wet sloppy gurgles and splutters. Then his young friend awoke and stood up over my tramping partner, kicking over her mug of water. She realised his intention and asked him if he needed to go to the toilet. He said yes and she told him to go outside.

My tramping partner got up at about 6am to enjoy the bird song. The late-arriving hunters abandoned the hut at this stage, remarking that they had been going there for 19 years and never encountered anything like it. The other tramper also left immediately.

We also packed quickly, decided against breakfast and, with the smell of beer and urine filling the air outside the hut, headed for home. 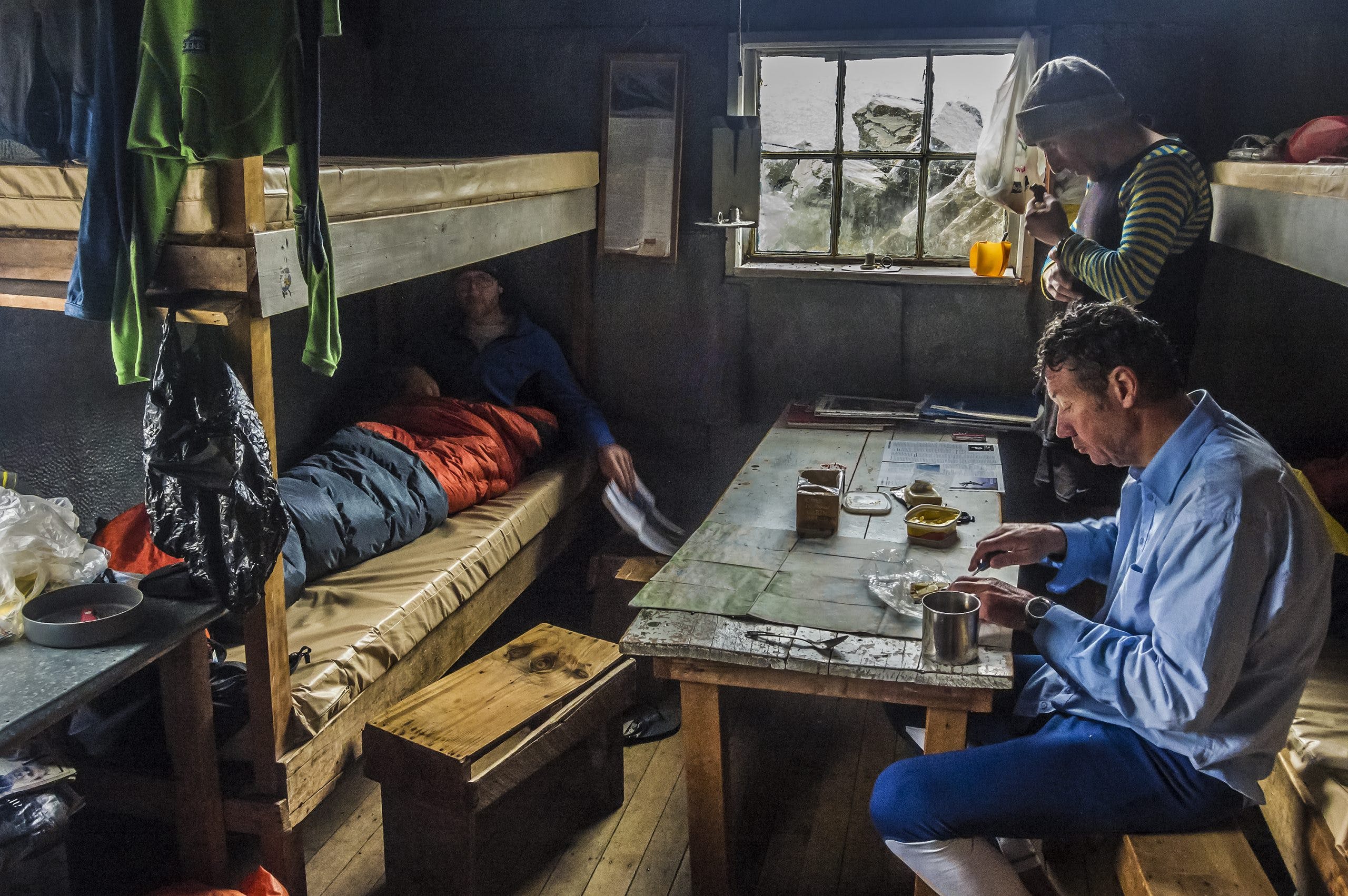 A master chef in the making

We were in Welcome Flat Hut in the Copland Valley. There were two parties in the hut, and it was bucketing down. There were four of us and two in the other party – student teachers, Dave and Barry. We got to know each other and, as the day passed, tall stories were told.

In the late afternoon, Dave declared that he was going to cook a very special meal for the two of them, and selected a range of ingredients, flavourings and spices from his pack.

Our idea of hut food was very basic. If dinner was filling and provided energy, it ticked the box. Haute cuisine in a hut had never crossed our minds so we watched with interest as Dave undertook a lengthy and complicated set of steps to prepare fine food. We were jealous, to be honest – this was in a league way above our cuisine.

Slowly the masterpiece was prepared and eventually two plates were dished up. Dave was proud and nervous waiting for Barry’s verdict. Barry carefully assessed the appearance and selected a forkful to taste it. Dave leaned nervously forward, unsure.

“Just like mother used to make,” Barry pronounced, and after a slight pause he added: “Bloody disgusting!”

Yes it was very funny for us. It’s a line we’ve used many times since, but the look on Dave’s face made it clear he didn’t see the humour in it. Still, they returned to Christchurch as friends and flatmates so maybe no harm was done. 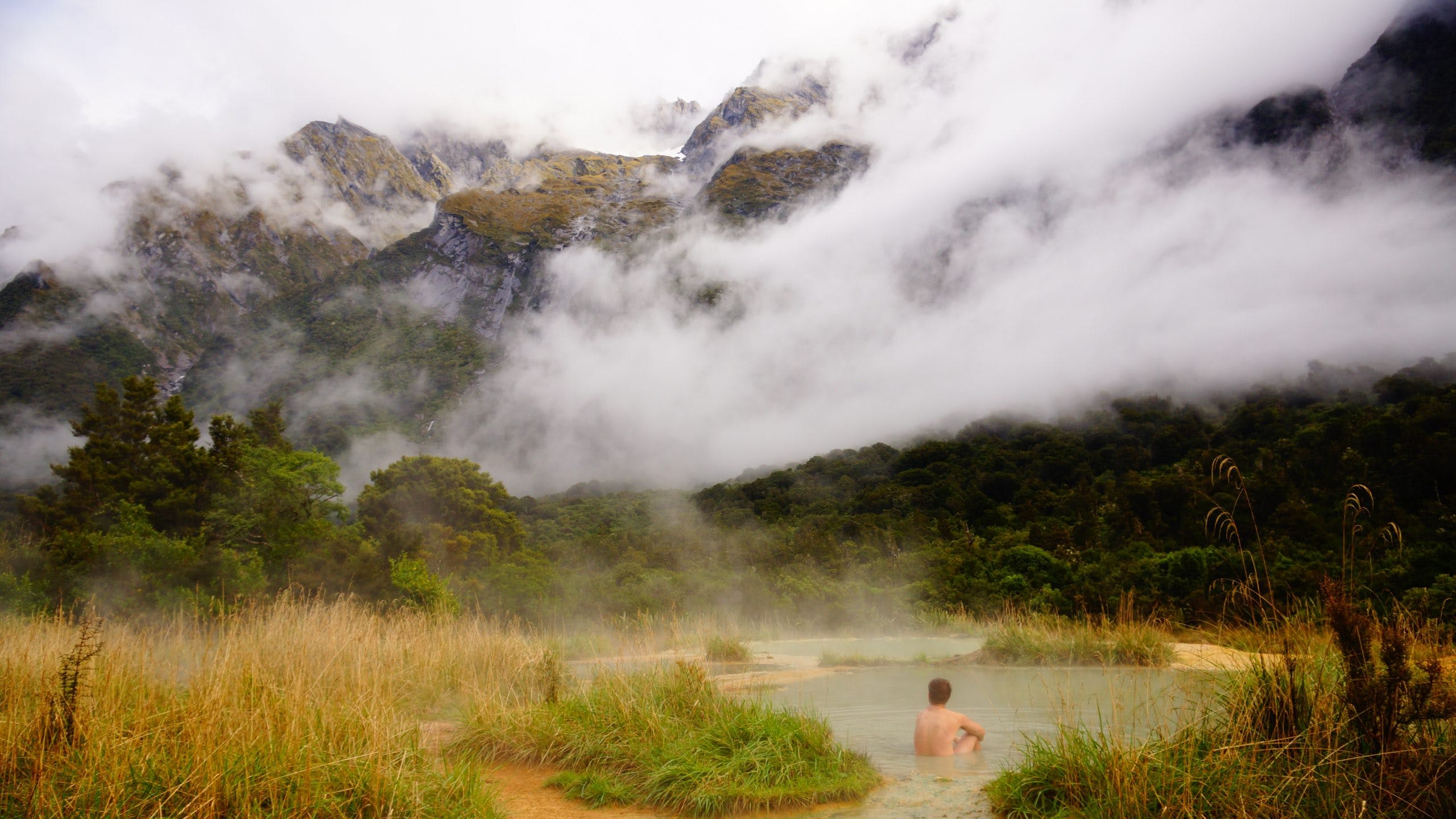 A hunter’s fantasy comes to life

In the 1970s, Welcome Flat with its hot pools was not a tourist hotspot. It was visited only by a few hunting parties and by those crossing the Copland Pass. Even in summer, there was every chance you would have the hut to yourself.

On one of our visits, we met Rick, a young West Coaster who had spent a few weeks at the hut by himself, working possum lines to try and make a few dollars from the skins.

Then, he dropped the bombshell. A young and beautiful woman did indeed walk into the hut. He was beside himself with expectation and apprehension that somehow it would all go wrong. He was on his best behaviour to impress her. He wasn’t a sophisticated man, nor was he wise to the ways of women. He was out of his depth with an international traveller who was living on a diet of nuts and fruit and was on a journey of purification.

In those days, no one thought of wearing togs in the hot pools, so he identified a shared dip in the pools as a key step. To his delight, she agreed.

At the pools, he eagerly undressed while she was admiring the pools. Then, panic set in and he immersed himself in the nearest pool rather than parade around naked. Unfortunately, he chose the hottest pool, and by the time she was undressed he was already uncomfortably hot. She had checked the pools and entered one at a moderate temperature. Now, what was he to do? He had to move, that he knew. Should he join her in the cooler pool? No, he thought, that was far too blatant so he excused himself and retreated to the hut. In due course, she returned to the hut and they chatted amicably. Next morning she left.

After Rick told us this story, he asked: “Where did I go wrong? Maybe because I treated her too much like a sister?”

A group of friends who enjoyed an annual walking trip together had a late withdrawal and I was invited to join them on the Milford Track.

They were all about 10 years older than me so rather than dawdle along with them, I slept late then moved at my own speed to the next hut.
It was raining when we went over the McKinnon Pass, but this didn’t detract from our enjoyment and augmented the spectacular waterfalls. At the bottom of the pass, though, Christine found her walking shoes were full of blood and she was very footsore. She hadn’t realised what long toenails and long downhills could do.

In those days, men considered they were in charge and so decided Christine should be flown out. She disagreed, saying she could continue. I thought she could if someone else could carry her pack. I also understood the sense of failure she’d have if she was unable to complete the track.

So I strapped her pack on top of mine and headed to the next hut. The next day, we shared the burden of her pack and Christine duly arrived triumphantly at the end of the track.

Some weeks later, the group met to share photos and relive the experience. Christine came over to thank me. I’d had a few drinks and replied: “It was an easy decision, Christine. I looked at the pack and I looked at you, and I chose the pack.”

Unfortunately, she was a bit sensitive about her weight and failed to enjoy my so-called joke.