A rugged weekend of volunteering turned into a life mission for a Wellington couple. By Geoff Whittle

You won’t be alone if you’ve never heard of the ‘Apias’. It’s a remote mountain creek that begins as a trickle on the side of Crown Ridge in the northern Ruahine Range, then develops force as it passes through gorges and over waterfalls before finally joining Ikawetea Stream.

Apias is apparently an abbreviation for ‘Any port in a storm’ and the moniker was bestowed by someone who escaped from the tops in foul conditions to the relative shelter of the creek.

My wife Lisa and I have been stoat trapping in the Apias for seven years. The remoteness of the creek and the quality of its water made it a refuge for whio. But, as with other similar rivers in the Ruahines, prior to the trapping programme, whio numbers were in decline.

The traps we check are just one part of an extensive network in neighbouring valleys that are all checked by volunteers.

At the time we began trapping, Lisa was working as a manager in DOC’s Wellington office.

Originally there was money in DOC’s budget for trap checking, but this disappeared during one of the department’s ruthless budget cuts. There was even a danger that existing trap lines would be removed. There was a desperate need for volunteers to take over the lines in the Apias, so Lisa signed us up.

It wasn’t a promising beginning. A too-early start from Wellington was followed by a four-hour drive to DOC’s now-defunct field base at Ongaonga where we were met by rangers Ken Mills and Mayer Levy. It was pretty clear that Ken saw us as useless city people who had no idea what we were letting ourselves in for.

Mayer, Lisa and I headed off in the trusty DOC four-wheel drive through Big Hill Station and to No Mans Road which winds its way up the ridge to the 1400m tops. At the road end we encountered our first trap and Lisa and I were taught how to clear and reset a DOC200 trap.

With our new-found skills, we descended through tussock and a raw eroded slip face across jumbly and rocky terrain, followed by an alarmingly narrow high sidle with the developing Apias below us. We gained the creek via a steep slip and were greeted by a trap with a well-rotted stoat.

The main skill required for clearing a rotting stoat from a trap is the ability to switch your nose off, which, sadly, I am yet to acquire.

With the persistent smell of rotting stoat in my nose, we encountered our first crossing of the creek and that set the pattern for the day. There were many more crossings, numerous awkward rocky sections to traverse, a high climb with a treacherous descent on a slip to avoid a waterfall, and a regular supply of rotting stoats and rats.

We finally reached the haven of Rockslide Biv where Mayer took the opportunity to do maintenance work while Lisa and I had a speedy dinner before diving into our sleeping bags.

The next day, the river sparkled, there were crystal clear pools and, lo and behold, a pair of whio – the first of two pairs we would see that day. The river had grown so that crossings were thigh deep wades, but they were fun.

We descended the creek to Ikawetea Forks Hut, which has a stunning setting in a clearing just before the confluence of the Ikawetea and Apias streams.

Our last day consisted of a sharp climb on a track to Tauwharepokoru and a beautiful flat red beech ridge which is followed for a couple of kilometres before another solid climb back to the car.

On the drive back to Wellington, I pondered what I had signed up for. Was this really what I wanted to be doing with my leisure time? 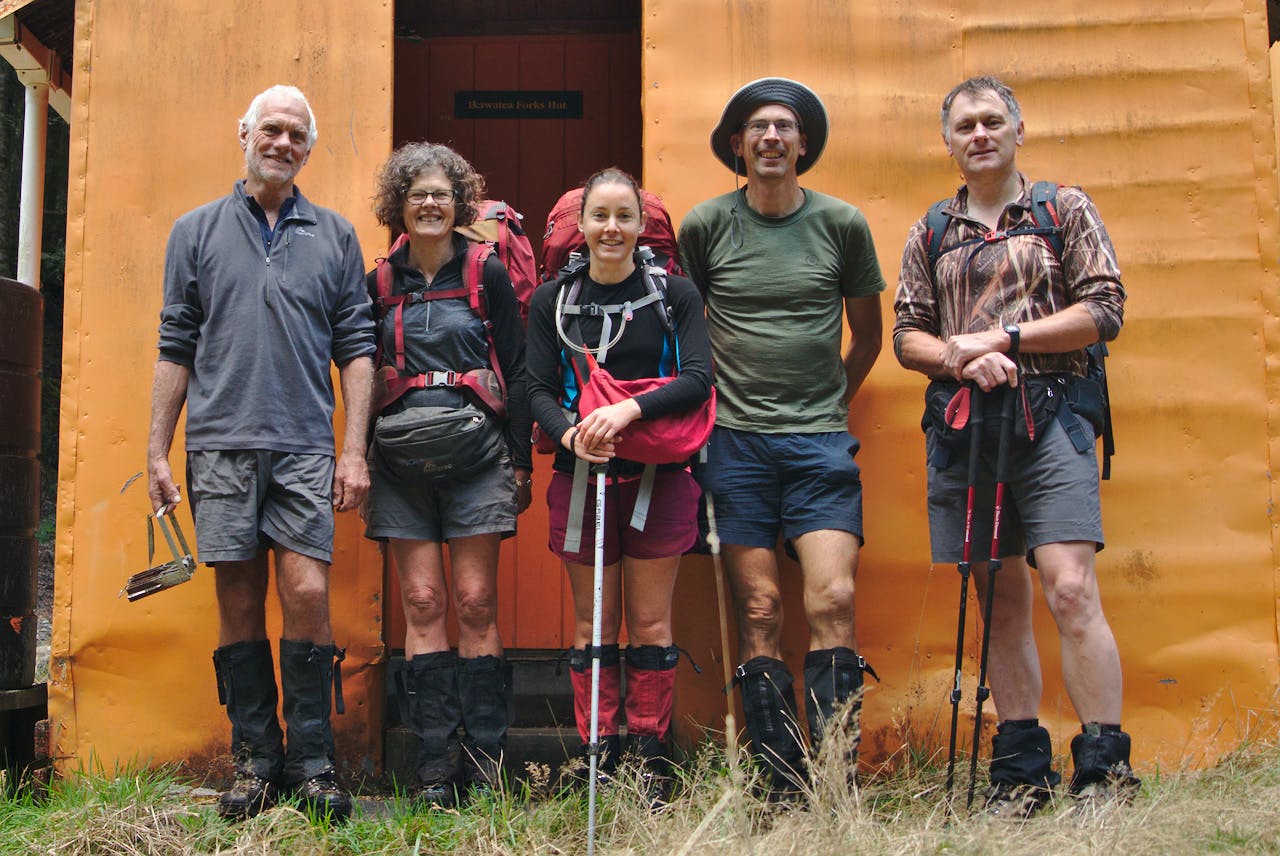 But somehow we became committed. We soon realised that if we were to check the traps on a regular basis, we would need to be able to do the trip in two days. This meant driving from Wellington to the road end in peak hour traffic on a Friday evening and making it all the way to Ikawetea Hut in a single day on Saturday.

The first time we did that I was so exhausted that I lay on the bunk with my whole body quivering for half an hour. But the body becomes accustomed and it now doesn’t seem so bad.

We also committed to another trap line in the area which mostly follows the tops. Our two lines are mainly disjointed, but they do both pass Rockslide Biv. It came as a shock to us when Lisa recently checked the entries in the Rockslide logbook to discover that we had completed 47 trips altogether.

The persistent smell of rotting stoat notwithstanding, we both feel that our lives have been enriched by our regular visits into the area.

The river itself becomes a living presence. It’s a dynamic landscape that changes after every flood and slip. We don’t tramp in new areas as often as we used to, but we’ve established a special connection with a remarkable area and that more than compensates for the lack of novelty.

And what about the whio? For the first few years nothing changed. We would typically see two pairs along the length of the river.

It only takes one flood to wipe out a breeding season and floods seemed to occur regularly. Then there was a good year. Our first sighting of a pair with five ducklings will live with us forever and since then the population has steadily grown. 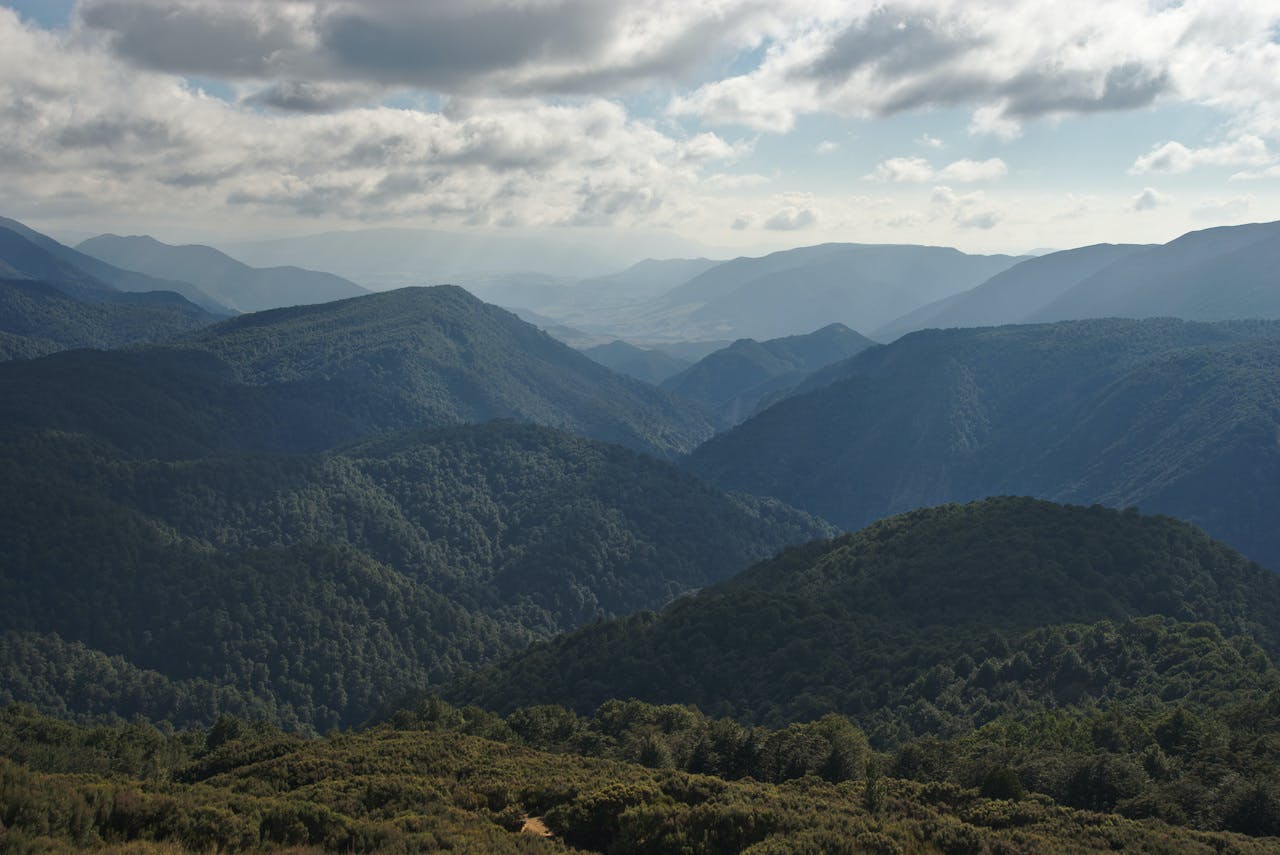 The Apias Creek, home to the endangered whio, runs through the northern Ruahine ranges.

On our last trip, in the section between Rockslide and Ikawetea Hut, we saw five pairs of whio and 11 ducklings – and that was on less than half the river. Hunters reported seeing two more pairs with ducklings below Ikawetea Forks Hut.

It’s exciting to see the change, but it’s not just the whio. There is a small population of kiwi that seems to be growing and a hunter recently reported seeing one in the daytime quite close to Ikawetea Forks Hut. Moreover, the whole bird population is thriving.

We now know that volunteer-run trapping programmes in remote mountain areas can work. But we believe we can do much more. What is to stop us creating a true mainland island in the northern Ruahine Range?

Trapping expert Darren Peters from DOC has outlined what would be needed to obtain complete eradication of stoats and possums from the northernmost section of the range. This would establish a bridgehead that could move south over time.

The vision has been shared with local iwi and also at the recent hui of the Ruahine Protection Group. It has been enthusiastically received, but it won’t be cheap. We will need about $3 million but with persistence we’ll get the funding.

Imagine the joy of tramping in a mountain range where the birdlife has returned to what it really should be.

– Geoff and Lisa Whittle were named the Outdoor Hero of the Year in the 2019 Wilderness Reader’s Choice Outdoor Awards.