Four old-school ski huts and where to find them

When Bill Mead and Bernard Drake decided to form New Zealand’s first ski club in July 1913, they chose for their headquarters one of the few mountain huts then existing: Waihohonu, in Tongariro National Park. Built a decade before by the newly established Department of Tourist and Health Resorts, the two-room hut ideally suited the fledgling Ruapehu Ski Club.

However, access to Waihohonu Hut was long, and completion of the Main Trunk Railway to National Park saw the focus of skiing soon shift to the western side of the park. RSC members decided they needed a hut right among the best ski basins, and Whakapapa proved ideal. They built Glacier Hut in 1922–23 and for more than a decade it was the only hut there.

During the 1930s, skiing took off as a surge of interest in outdoor pursuits and winter sports gained momentum. Ski clubs formed wherever there was suitable terrain, and many clubs built huts.

Gradually, the larger ski areas gained better facilities, and huts grew into lodges. The rough and ready shelters of the past were pulled down or succumbed to the elements. However, a few survived and still make memorable destinations, including these four notable ones. 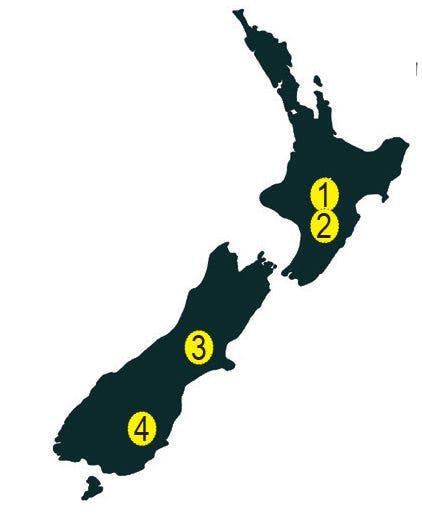 Now surrounded by the flash, large lodges of several ski and tramping clubs, the diminutive Glacier Hut looks a bit like a museum piece – which is what it is. Since the Ruapehu Ski Club built a much larger lodge, the historic ski hut has not been used for accommodation. Restored in 1986, it’s kept locked, but interested parties can arrange for a tour of the interior, which serves as a museum of yesteryear skiing – and even houses Bernard Drake’s original Swiss skis. Located in the heart of Iwikau Village, Glacier Hut lies about 20 minutes’ walk from the main car park.

Rangiwahia Hut has had as many lives as half a cat – about four, depending on how you count. The original was a shelter used by musterers stalking sheep on the tussock tops of the Whanahuia Range. In 1938, members of the Rangiwahia Ski Club expanded it to serve as a ski hut and towed up an old Indian motorbike to power a rudimentary rope tow. The club didn’t survive, and in the 1960s the old hut was adopted by the Palmerston North Tramping and Mountaineering Club, which later rebuilt it. The current version was erected by the New Zealand Forest Service in 1984. While now mostly a destination for trampers, old skis fixed to the hut’s exterior give a nice historical nod to its past. The hut lies a relatively easy 2.5- to 3-hour walk from Renfrew Road.

An offshoot of the Canterbury Mountaineering Club, the Mt Cheeseman Ski Club was formed in 1929 and soon began to develop the basin under Mt Cockayne for their activities. But first, they needed a hut. Despite having only 23 members, the energetic club built its first hut in 1930. Prosaically named Bottom Hut, it proved too low for reliable winter snow, so in 1948 a second hut was built higher up. Known as Middle Hut, members laboriously carried in materials piece by piece on their backs. Nearly 90 years since its formation, the club still thrives, and the Mt Cheeseman ski field boasts two lodges, modern facilities and good road access.

Now just a corrugated iron shell beside the road, Middle Hut serves as a reminder that these days, we take vehicle access for granted.

Located close to Dunedin, the high, tor-studded Rock and Pillar Range was an accessible place to develop skiing. Members of the Otago Ski Club, formed in 1932, built their first hut, a stone one known as Top Hut, in 1937-38. But a larger replacement was soon needed, and in 1946 Big Hut was erected.

A rope tow serviced the skiers and for a decade or so it was a popular destination for winter sports. However, in the 1950s skiers moved to the commercial fields near Queenstown and the hut was largely abandoned. Ownership eventually passed to the Otago Tramping and Mountaineering Club, then the hut was slated for removal, before a trust was formed to restore it in 2003. Thanks to their efforts, the large, comfortable hut offers a base for tramping or winter ski touring – provided you make a modest donation to the trust.