In the whole gambit of tramping experiences, one of the most exhilarating is standing on a rock outcrop, surveying the surrounding country. It’s the sort of situation likely to make you feel slightly superior to all those lowlanders stuck in cities and towns. The best outcrops offer stable footing, perched above a giddy drop. To 18th century romantics, the mixed feelings of awe, terror and pleasure induced by such eyries were ‘sublime’.

Last Anzac weekend, my tramping party enjoyed a sense of the sublime on a rock outcrop in Ruahine Forest Park. Eastwards, we overlooked the immaculate beech forests of the Ikawetea Valley, lined below in ranks of ridges. To the west sprawled the golden tussocks of the Mangaohane Plateau, and beyond rose the frosty crown of Ruapehu, glistening with the first-of-the-season snow.

The outcrop itself is one of several limestone features near Makirikiri Trig, but this one, protruding like a ship’s prow, is perhaps the most spectacular. Beneath it we found a passable bivvy site. 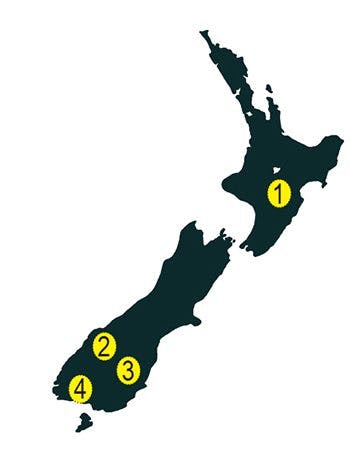 Ruahine Corner Hut should be on every tramper’s ‘must-visit’ list. Situated on the edge of extensive rolling country dominated by red tussock, the hut has fine views and catches the sun virtually all day. It takes about two days tramping to get there; either from the west via Iron Bark and Colenso huts, or the east via the main Ruahine Range. It’s worth spending a whole day here, wandering along the poled route to Makirikiri Trig and the outcrops beyond.

With its lofty position above the sheer cliffs of the Matukituki Valley and view of Mt Aspiring/Tititea, Cascade Saddle is another holy grail of tramping destinations. Many trampers aspire to take a classic photo of their companions perched on a distinctive rock outcrop near the saddle that gives a great sense of scale.

For the rock outcrop enthus-iast, Otago’s Rock and Pillar  Range offers plenty of geological interest. A good weekend tramp begins from near Middlemarch, climbs Kinvara Track, an old vehicle track, to Leaning Lodge, onto the range crest, passes through the tors of Summit Rock (1450m) to Big Hut, from where a poled route leads back to the Taieri       Valley.

Outside of Central Otago, Hump Ridge offers perhaps the most spectacular rock outcrops in the country. Okaka Lodge provides an excellent base from which to explore the surrounding tops and their innumerable tarns and tors. It’s part of the worthwhile three-day Tuatapere Hump Ridge Track.