The backcountry long-drop might not be the sort of place you want to spend much time; no longer than necessary anyway. But some are superbly located, and offer better views than the nearby hut. The one at Pioneer Hut in Westland Tai Poutini National Park affords unsurpassed views of the Fox Glacier névé, and on a clear day you might even be able to see the line of breakers crashing into the distant shores of the West Coast. Perched on a cliff-edge, it’s an eerie place, or perhaps an eyrie, depending on your state of mind. The other three sites described here, while not quite so lofty, are certainly worth visiting. 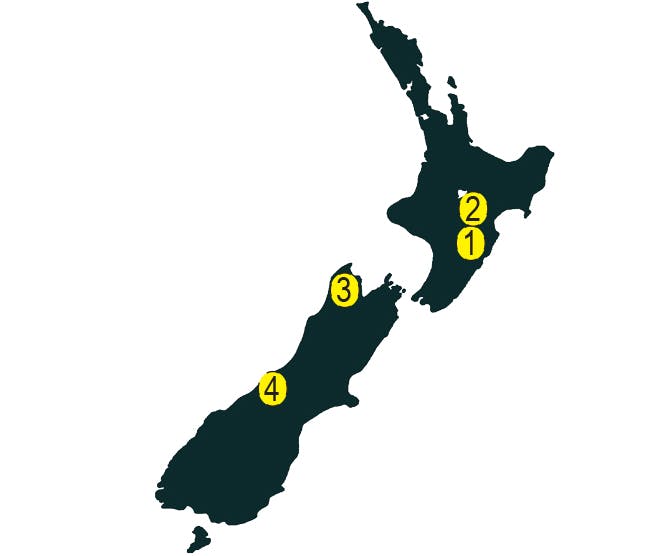 Tarn Biv is a classic dog-box style shelter situated on Black Ridge in the eastern Ruahine Range. It’s most often approached via the Rosvalls Track, which begins in the Tukituki Valley. When the Forest Service first constructed these bivs, many did not get a toilet, as use was low enough not to need one. A full-size long-drop would have dwarfed the bivvy and intruded too much into the landscape. When DOC did later construct an open-air thunder-box at Tarn Biv, it was all that was required (although rather exposing in more ways than one).

Not surprisingly, the long-drop at Whangaehu Hut has one of the best views in the North Island. Situated at 2000m on the eastern flanks of Mt Ruapehu, the hut overlooks the deep gulch of the nearby Whangaehu River, and has expansive views of the Kaimanawa Ranges. To reach the hut, most parties approach from Tukino, but some traverse over Ruapehu’s Summit Plateau and descend the Whangaehu Glacier.

This small alpine lake, cradled among mountains with names like the Dragons Teeth, Trident and The Needle, is something of a tramper’s holy grail. The diminutive three-bunk hut sits on a ledge above the tarn in the northern reaches of the Douglas Range. It’s most often reached on a Dragons Teeth tramp, but another spectacular approach is over Yuletide Peak from the Anatoki Valley.

Pioneer Hut, managed by the New Zealand Alpine Club, is perched on a rocky ledge at 2350m above the névé of the Fox Glacier. As well as extraordinary views of the upper névé and West Coast, the hut offers a fine angle of Mts Tasman, Lendenfeld and Haast, some of the country’s highest peaks. The current Pioneer Hut, built in 1999, is the most recent of five shelters to occupy Pioneer Ridge, with the first bivouac dating back to the 1930s. Most parties reach the hut by flying in, but keen mountaineers sometimes walk in via Chancellor Hut or the Fritz Range.