How do you spend a week in New Zealand’s southern-most national park? Neil Silverwood and Lauren Kelley have no trouble finding great tramping loops, rich bird life, sea kayaking and even a wilderness experience

AS WE HOPPED aboard the Oban ferry, someone called out, “Don’t forget your passport!” While they were joking, going to Stewart Island really does seem a world away from it all. New Zealand’s third largest island feels completely different to any other part of the country.

In 2002, the majority of Stewart Island was gazetted as a national park; it is now the fourth largest national park in the country. The northern half is criss-crossed by an extensive track and hut network including the Rakiura Track (a Great Walk) and the North West and Southern Circuits, while the southern half of the park is a proposed wilderness area with no official tracks or huts.

If you’re looking to spend one week on Stewart Island, the options are plentiful.

The Rakiura Track gives visitors a comfortable taste of what rugged Stewart Island has to offer and traverses a contrasting landscape of sedate bays, rocky coastline and dense native forest. It’s a nice way to see the island if you’re short on time.

The 32km loop is designed to take three days to complete and has three distinct sections. The route begins at Lee Bay and then traverses the northern coastline while the second day involves following New Zealand’s longest boardwalk through lush podocarp forest. The last section meanders around the peaceful and sheltered Patterson Inlet.

The terrain is often muddy and DOC has built a substantial network of boardwalks which keep feet dry and allow for access to fragile areas unable to support much foot traffic.

Tip: You’re likely to see a kiwi if you head out at night and listen for their calls.

Hire a plane, land on a beach and tramp back to civilisation 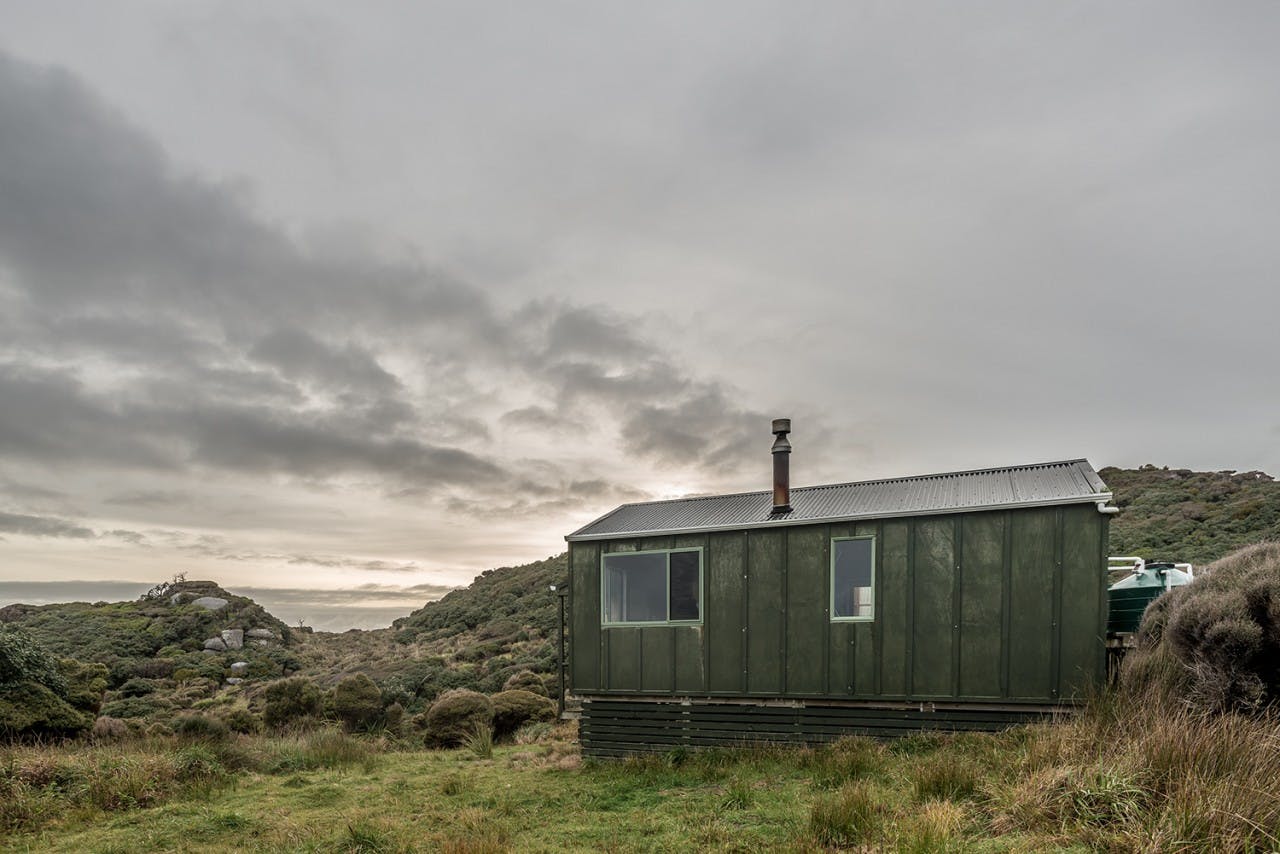 Long Harry Hut is at the northern end of Rakiura, on the North West Circuit. Photo: Danilo Hegg

If there’s one trip on Stewart Island that takes in some of the best parts of the island while avoiding the boggiest tracks, it’s flying to Mason Bay and tramping back to Oban via the North West Circuit. Stewart Island Flights have a charter service which lands at one of three spots on the 19km-long Mason Bay beach. Prices are reasonable and are dependant on group sizes.

Mason Bay Hut is a great spot to stay on your first night. Then begin the long tramp back to Oban on the North West Circuit. The track heads north to the Ruggedy Mountains, following a series of long pristine beaches with short sections of boggy track that turn inland to avoid rugged sections of coast. In the height of summer, the track and huts are often busy but during autumn, winter and spring the track is relatively quiet.

There are seven huts between Mason Bay and Oban; all are well built and have plenty of character. What really makes this route stand out, though, are the beaches. We’ve never been anywhere as beautiful as East Ruggedy but I’m sure you’ll find your own favourite Stewart Island spot.

The route takes five to seven days but it’s worth allowing an extra day to spend at one of the idyllic beaches en route.

Tip: Stewart Island is mild in winter and you’re likely to have the track and huts to yourself.

Step back in time on Ulva Island 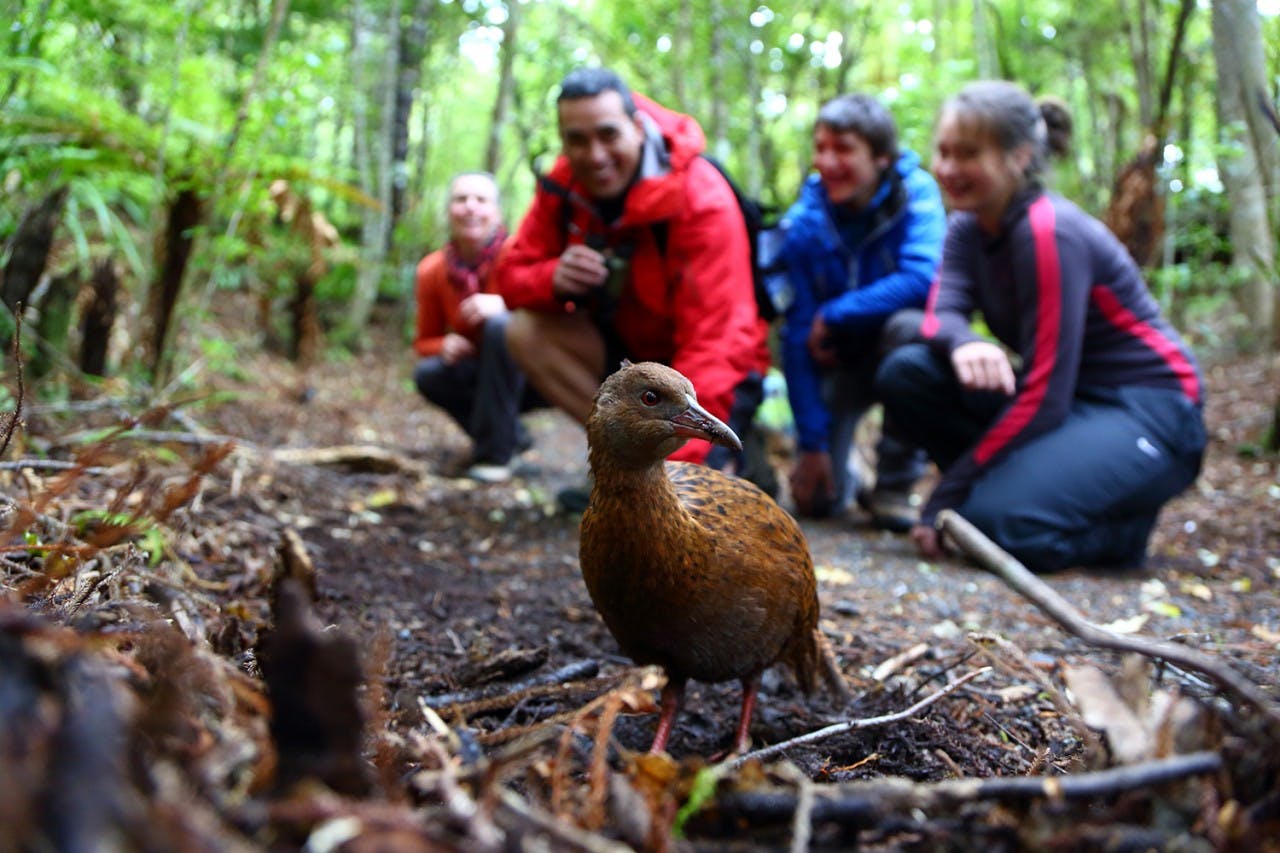 Weka and other native birds can be seen. Photo: Stewart Island Promotions

Ulva Island, in Paterson Inlet, is a predator-free open sanctuary. Its largely unmodified podocarp forest is unique for an offshore island and extensive rat eradication work has been done to make it a paradise for birds and bird watchers. Species found on the island include the rare tīeke/saddleback and mohua/yellowhead. Stepping off the boat onto the island is like walking through a doorway into the past, offering a glimpse of what New Zealand’s bird life would have looked and sounded like before the impact of human settlement and introduced predators. It’s a short water taxi ride from Oban and visitors can go on a self-guided walk or arrange a local guide in advance.

Rest your feet and hire a sea kayak 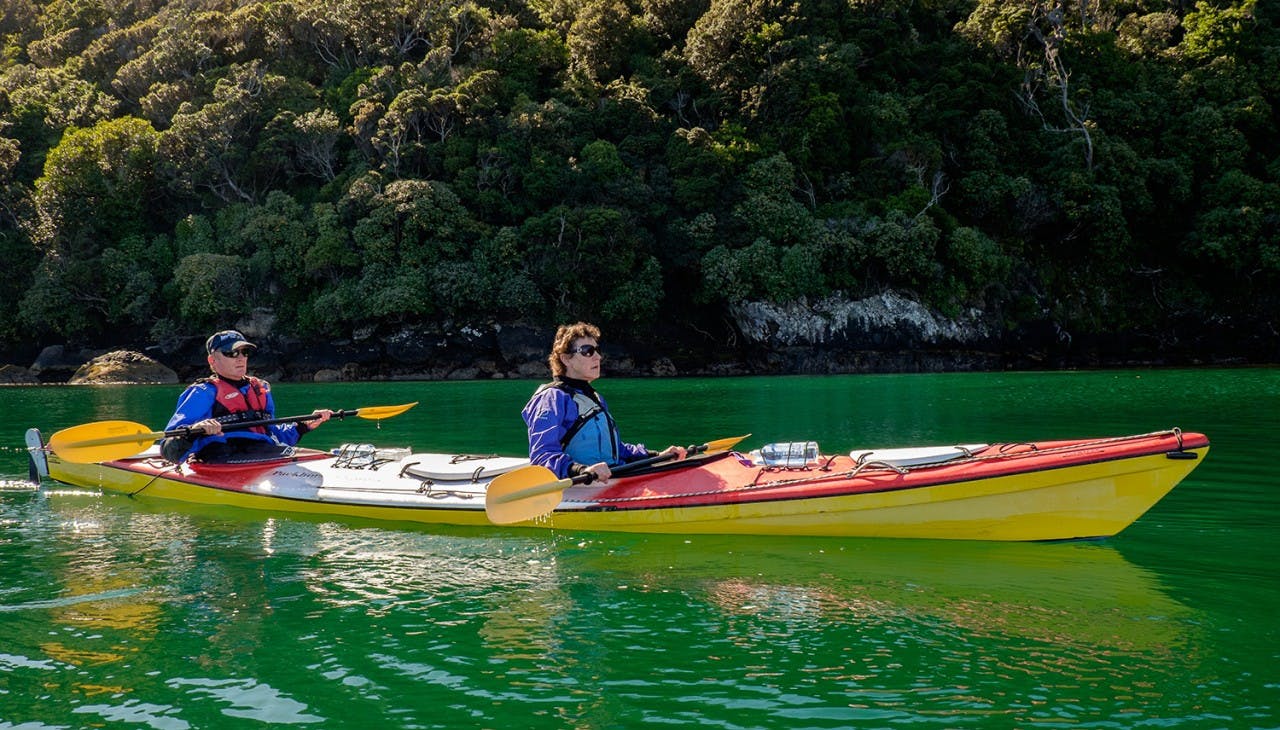 Patterson Inlet to the south of Oban offers sea kayaking in sheltered conditions and numerous huts to visit to make a multiday trip (three days) possible.

North Arm Hut, Fred’s Camp Hut or Rakeahua Hut (when the tide is high) can be reached in a day’s paddling. From Rakeahua Hut, you can give your arms a rest for a day by hiking up Mt Rakeahua, or from Fred’s Camp Hut tramp over to Mason Bay for the night.

Tip: There is plentiful seafood in the waters around Stewart Island and it’s well worth throwing in a fishing line or fossicking for shellfish around beaches and rocky shores. You might end up with mussels, cockles, pāua or a fish for dinner! (Stewart Island fishing regulations differ to elsewhere in the country, so check before you go). 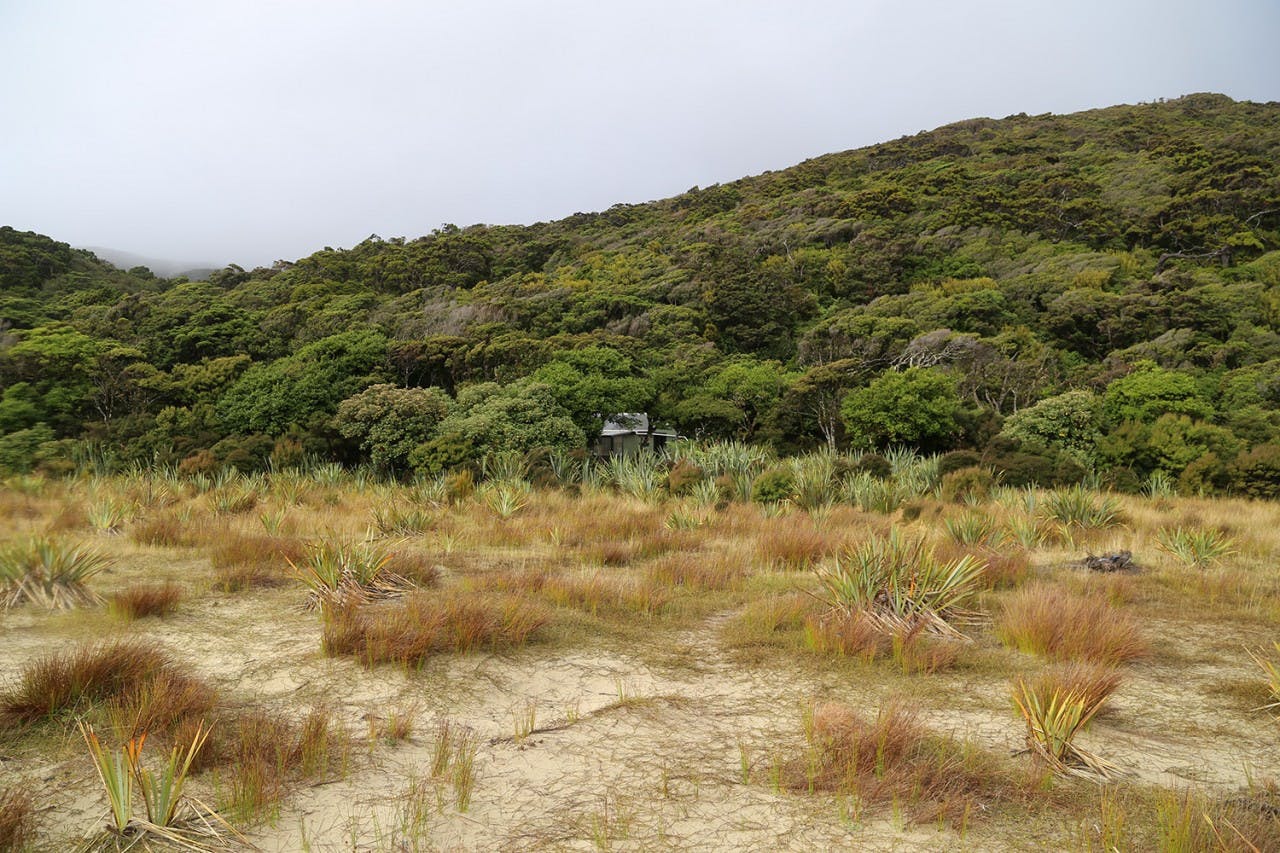 The Southern Circuit is a quiet alternative to the popular North West Circuit. It links Patterson Inlet with Doughboy Bay and Mason Bay.

The highlight for many will be a visit to Doughboy Bay, an isolated, windswept beach on the west coast of the island. It’s a special, desolate-feeling place – Doughboy Bay Hut is the southern-most tramping hut in New Zealand.

The route involves a mixture of boardwalks, beach travel and boggy track. At times, especially after rain, the track really does turn to bog and you may well disappear up to your waist in gooey mud.

But it’s a great track and will test every tramper’s endurance and tolerance for rough terrain.

The Southern Circuit is quieter than its northern counterpart and can be completed in four to five days.

Tip: Look out for the rare and valuable ambergris (a secretion from the intestines of sperm whales) sometimes found on west coast beaches.

Take a walk on the wild side 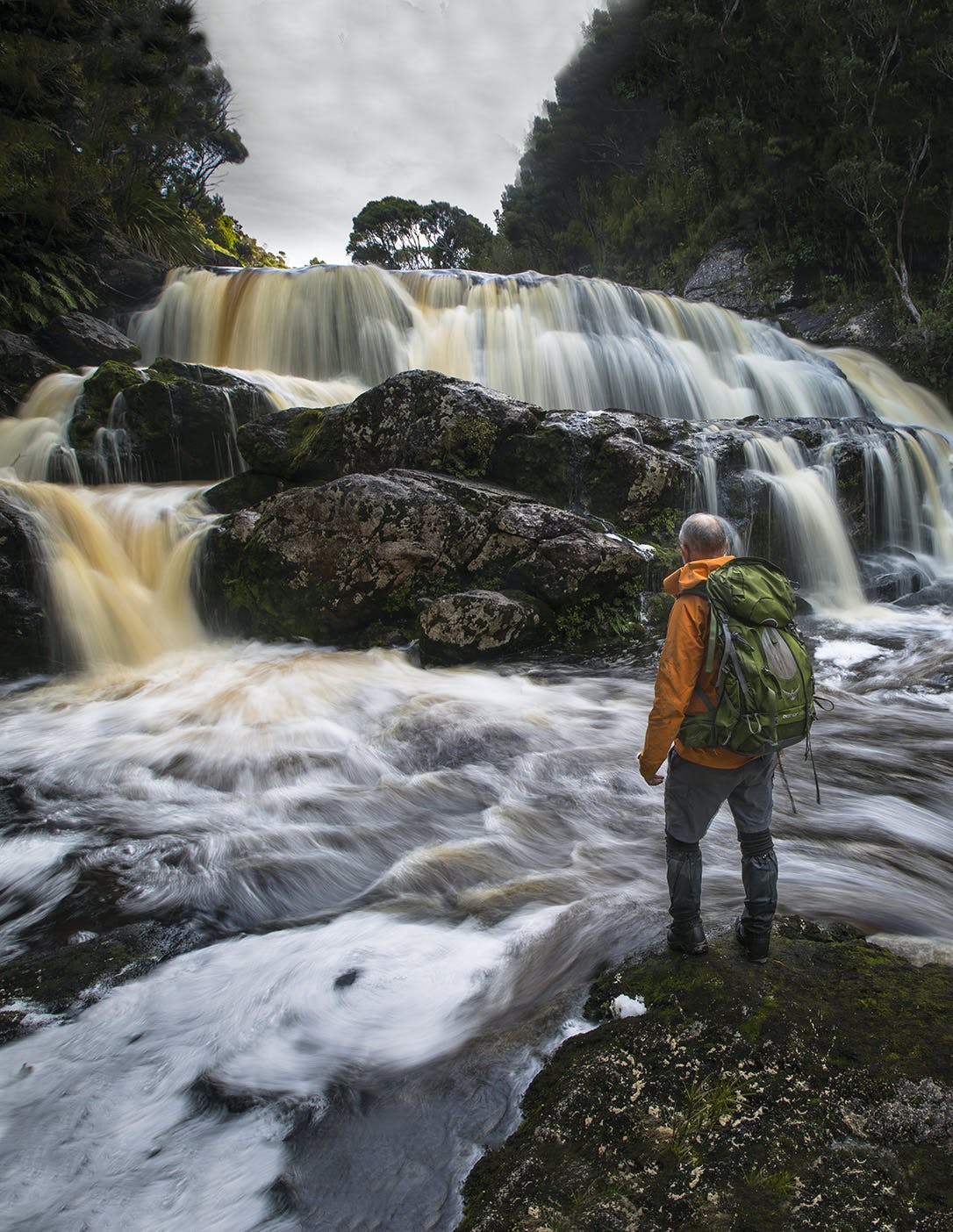 For a true wilderness experience, head down to Port Pegasus and traverse the Tin Range.

This range has become, in tramping circles, a place of legend. The mountain range is small compared to its northern counterparts, with the highest point, Mt Allan, just 750m above sea level. But the broad ridge is battered by westerly winds and is a wild place – the bushline this far south is at just 500m.

To get there, hire a water taxi from Oban to the historic Pegasus Township which was the site of New Zealand’s only tin-mining operation. For about 30 years, from 1888, miners sporadically worked the land but not much tin was ever extracted. Now the old township is deserted and apart from a few bricks and broken bottles there’s little to see.

Beyond the old town site, you can hike up the Tin Range Surveyors Track, which gently climbs to the tops. An alternative route is the Tin Range Tramway which starts at Diprose Bay and utilises an old tramway. It eventually joins the surveyors track. There is a great campsite at an old dam where the tramway and surveyors tracks terminate.

The route from here along the Tin Range is lightly marked by small cairns, sticks        and single upturned rocks. While tramping the exposed terrain, you might spare a thought for the postmaster who navigated this route on a regular schedule carrying the mail from Patterson Inlet to Pegasus when the town was busy. He didn’t have a cosy Macpac tent or Gore-Tex jacket to keep him warm and dry.

There are numerous sites suitable for camping along the range – a particularly good spot is at the small lake beneath Mt Allen.

Just north of Table Hill is an overgrown track leading through dense scrub. The upper half of the track is overgrown but easy to follow, while the bottom half down to the Southern Circuit Track is well maintained. It intersects the Southern Circuit just west of Rakeahua Hut. From there, the easiest way back to civilisation is by water taxi – either at high tide from Rakeahua Hut, or, after another day’s tramp, from Fred’s Camp Hut near the entrance to Patterson Inlet’s South West Arm.

Tip: Navigation on this route is incredibly difficult in bad weather as the ridges are broad and the route only lightly marked. It is best tackled in summer with a number of fine days. Allow four days.