The Tongariro Alpine Crossing will be better managed this summer, although it’s unlikely there will be any major management changes in place.

DOC’s regional director of operations, Allan Munn, said there are “a whole bunch of things being put together with caution”.

“Our long term objective is to manage that walk more closely in a way that it’s maintained and enhanced, through sharing the stories of iwi, to become a world class experience. We agree that a big part of it is the story Tūwharetoa want to tell.”

DOC is working more co-operatively with both iwi and transport concessionaires, he said. “We’re cautiously optimistic about what we might be able to achieve by a bit of goodwill.”

Munn hinted at the future use of transport hubs from local towns, and through that managing staggered starting times to ease congestion on the walk.

“We don’t actually know what the upper daily limit on that walk is,” he said. “The reason we don’t know is because we don’t control the starting times that people walk during the peak summer period. The big variable is, if we could stagger start times of those folk over, say, four to five hours in the morning, then perhaps a sensible daily number can be a lot higher than we might currently think.”

Guide concessionaire, Stew Barclay, told Wilderness earlier this year that staggered start times would help. “Everyone starts early to beat the crowds, so they don’t. After about 3-4pm there’s no-one up there, yet there’s plenty of daylight. People could start later, the bus shuttles could be managed to do this.” 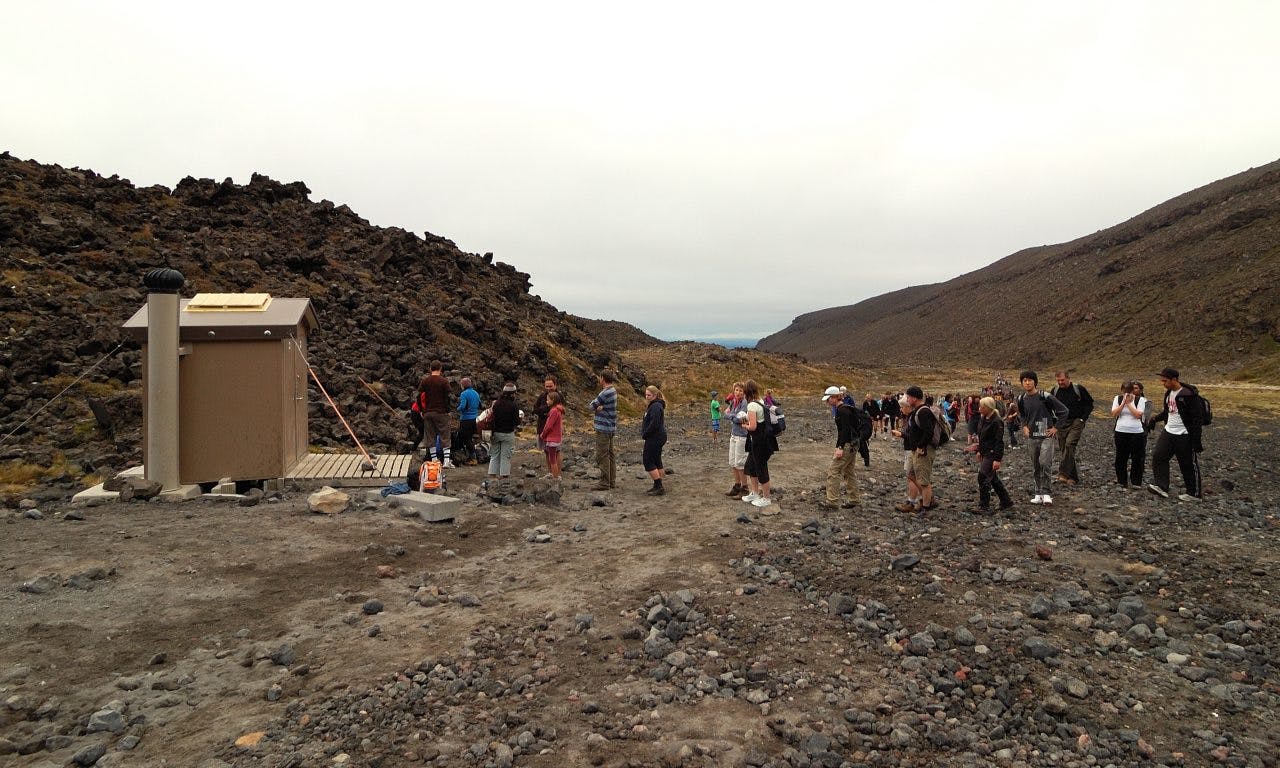 More, and cleaner, toilets have been promised for the Tongariro Alpine Crossing in 2017. Photo: Rosino/Creative Commons

Establishing transport hubs in local towns is also a potential part of future planning, said Munn. “We want to gear the total package in such a way that we can also enhance the economic viability of local towns such as Ohakune, National Park and Turangi. An important thing to remember is that the crossing is now a very important part of the local economy.”

Munn did rule out development by DOC of any new car park in the national park (“it’s against the management plan and neither do we want to”). However, out of DOC jurisdiction is private land along SH46. Any car park development on that land would have an impact on how the Crossing could be managed, says Munn. He also has misgivings about the aesthetics of any such development.

“One of the great things about Tongariro is that there has been very little ribbon development on the roads around the park, so as you’re driving along there you get that true sense of the mountains and the landscape. That’s a marvellous thing to maintain and New Zealand needs to be careful about that.”

He also insisted the current situation on the crossing, bar a few peak days, is not the disaster some media have made it seem. “On an increasing number of days we do have too many people up there and that’s simply because of the bottleneck around when they all start their walk, but still the satisfaction levels are very high.”

An important point, said Munn, is that DOC is conscious of not alienating Kiwi walkers. “Whatever management structures we put in place we need to ensure that we are still providing for New Zealanders.”

Perhaps that’s as easy as having a Kiwi sleep in – and starting the walk later in the day.