Four huts where you can find interesting graffiti

“See if you can find Hillary’s name,” challenged Joe after we arrived at the historic Boulder Forks Hut. We set about examining the interior of the hut, thought to be more than a century old. It was built for mustering when optimistic graziers thought they could make a go out of running sheep in these high, dry mountains of southern Marlborough.

When Edmund Hillary and two other RNZAF personnel arrived here in June 1944 to climb nearby Pinnacle (2120m), they stayed in the hut. Back then, sheep still roamed to eat what little grass they could find.

Since Hillary’s visit, the sheep have gone, with manuka and wilding pines claiming the lower spurs and mountain faces. Not much has changed to the hut however. The bunks have been removed (as everyone stays in the newer six-bunk hut nearby); but it still has a large open fireplace, reinforced with river stones, beech pole rafters, a dirt floor and diminutive door. At 178cm, I have to duck to avoid banging my head on the doorframe, so I can imagine how much Hillary must have had to stoop.

“Found it yet?” Joe asked. Nope. We’ve seen the pencil marks of Canterbury Mountaineering Club member G. Raoul who scrawled on the ceiling in 1954, and deer culler M.R.T van Bruggen who also recorded his name that same year. After admitting defeat, Joe points out the faded inscription. It must have been written by the first man on the list, Tom Hawes, as he’d spelt Hillary with only one ‘l’. The third man was Jeff Jones.

Much more recent graffiti, written rather less gracefully in felt-tip pen, defaces other parts of the roof. To me this seems like vandalism, but perhaps in 70 years time others may not view it that way. Today’s record is tomorrow’s history after all.

Here are four huts where you can see interesting graffiti. 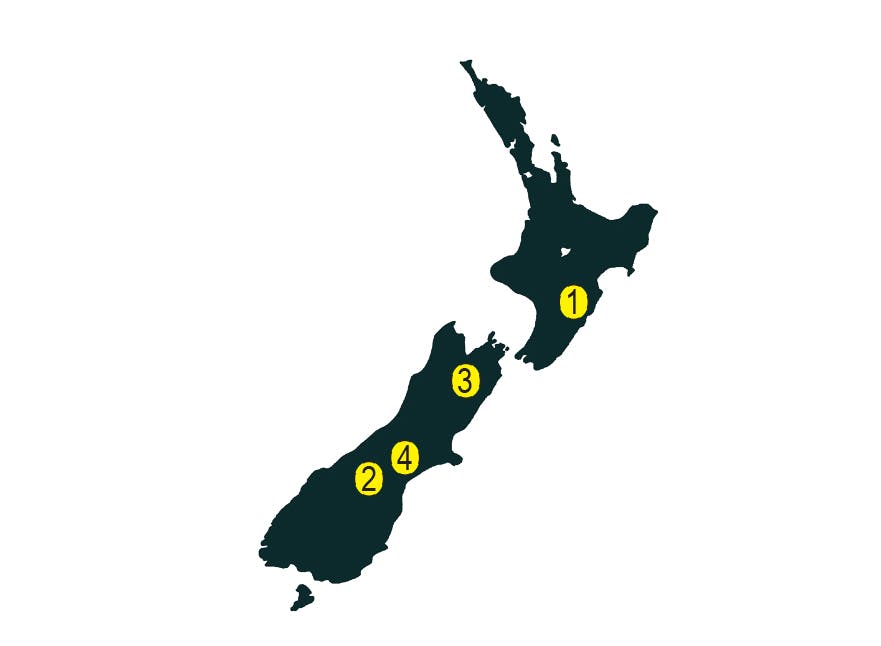 The Department of Tourist and Health Resorts erected the hut in 1903-04 to encourage tourism in Tongariro National Park. Historic graffiti includes members of the Ruapehu Ski Club, who held their inaugural meeting in the hut in 1913. Access is on the Tongariro Northern Circuit or on a track from the Desert Road. It’s no longer possible to stay in the hut; but the large and comfortable modern Waihohonu Hut lies just 10 minute’s walk away.

Probably built sometime about 1890, Hideaway Biv is the oldest of the huts mentioned here, and originally served as shelter for musters working the large Benmore Station. DOC historians have listed the hut’s graffiti on an interesting information panel inside the hut, including the oldest from 1890. Governor General Lord Bledisloe recorded his visit in 1931. The biv, accessible from the Ahuriri Road, is reached after 2-3 hours.

Boulder Forks Hut is reached on a 4WD track from the end of Leatham Road. While the historic hut is no longer used for accommodation, the nearby six-bunk hut of the same name is comfortable. A vehicle with reasonable ground clearance is recommended, and several fords en route can be impassable after rain. To find Hillary’s name, look on the ceiling near the door. A torch would help illuminate the faded names.

Potts Hut lies on a river terrace in the headwaters of the Potts River, a tributary of the Rangitata. Search the southern exterior walls of the hut for penciled names of various mustering gangs, who often recorded their annual stays. The earliest dates from about 1906, when S.R. Johnson and five others recorded being trapped there by bad weather for nine days. ‘And with the help of God Almighty we might reach the Rangitata Hut tomorrow night,’ he scrawled in still-legible pencil.