Want to sample the Te Araroa Trail but not the bits everyone is already heading to? Evelyne De Boeck walked the length of New Zealand and uncovered these hidden gems along the way

Everyone knows the Te Araroa Trail covers some of the most spectacular landscapes New Zealand has on offer, from the sweeping beaches of the north to the soaring peaks of the south. It includes places keen Kiwi trampers put high on their bucket lists, such as Nelson Lakes National Park. Yet for those seeking a taste of the Long Pathway, away from the crowds, it includes quiet, hidden places that are spectacular in their own right.

Possibly one of the greatest treasures in the North Island, Pureora Forest is home to some of the finest lowland forest left on the island (there is an interesting exhibition on the struggle to save the forest at the park’s visitor centre).

The Hauhungaroa Track leads to the Hauhungaroa Range where numerous high peaks offer truly spectacular views over the Central Plateau and Lake Taupo. This fantastic bush walk passes through a steep, but beautiful gorge and traverses several ridgelines.

There are three cosy huts along the route.

Together with the Herekino and Raetea forests, the Omahuta and Puketi forests make up a notorious forest belt stretching from Northland’s west-to-east coast. The forests are known for their extremely rough tracks, bush bashing, slow going and ever-present and often knee-deep mud.

Puketi is the least brutal and most charming of the three forests belonging to this Northland section. At the forest entrance on the Omahuta side, the beautiful Apple Dam campsite offers a chance to visit a kauri sanctuary where Hokianga, the sixth largest-known kauri tree, towers over the forest. Once in the bush, the trail guarantees a day of wet boots as it follows the stunning  Mangapukahukahu Stream (a fair-weather route only, as the canyon is subject to flash floods) and later the Waipapa River, before heading up the Pukatea Ridge Track through a stand of regenerating kauri. 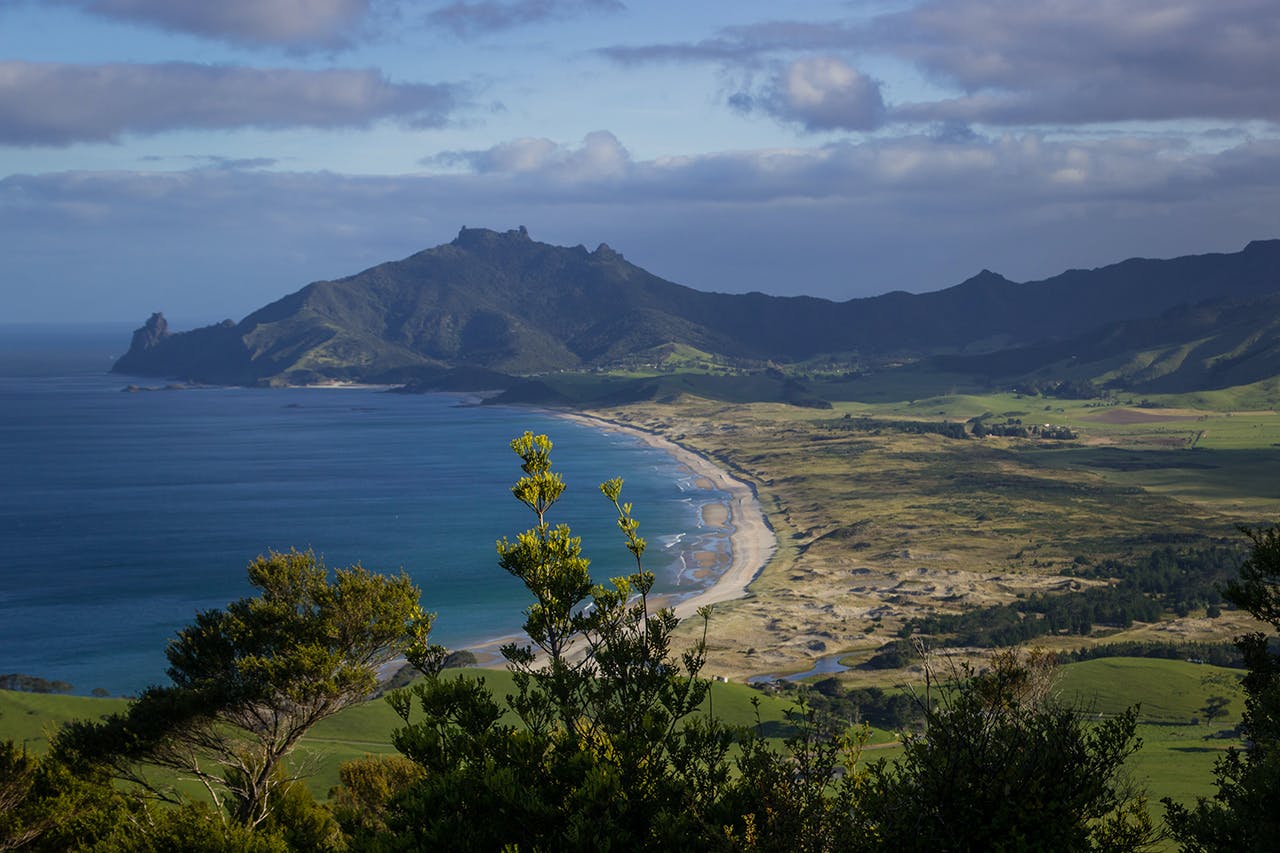 Better to visit for its views than for its kauri trees, Kauri Mountain, 245m, offers a stunning panorama over Ocean Beach and the peaks of Bream Head Bay. There are also great coastal views over the Pacific on the way up.

This walkway is a stand-alone forest track in the Waikato and is edged by farmland on one side and the Waikato River on the other.

Reaching the Hakarimata Range crest involves ascending hundreds of steps. But from there on, a rough ground trail runs the length of the range, through beautiful native bush. Climb the viewing platform on the summit of Hakarimata, 374m, before descending several hundred more steps to the road end. 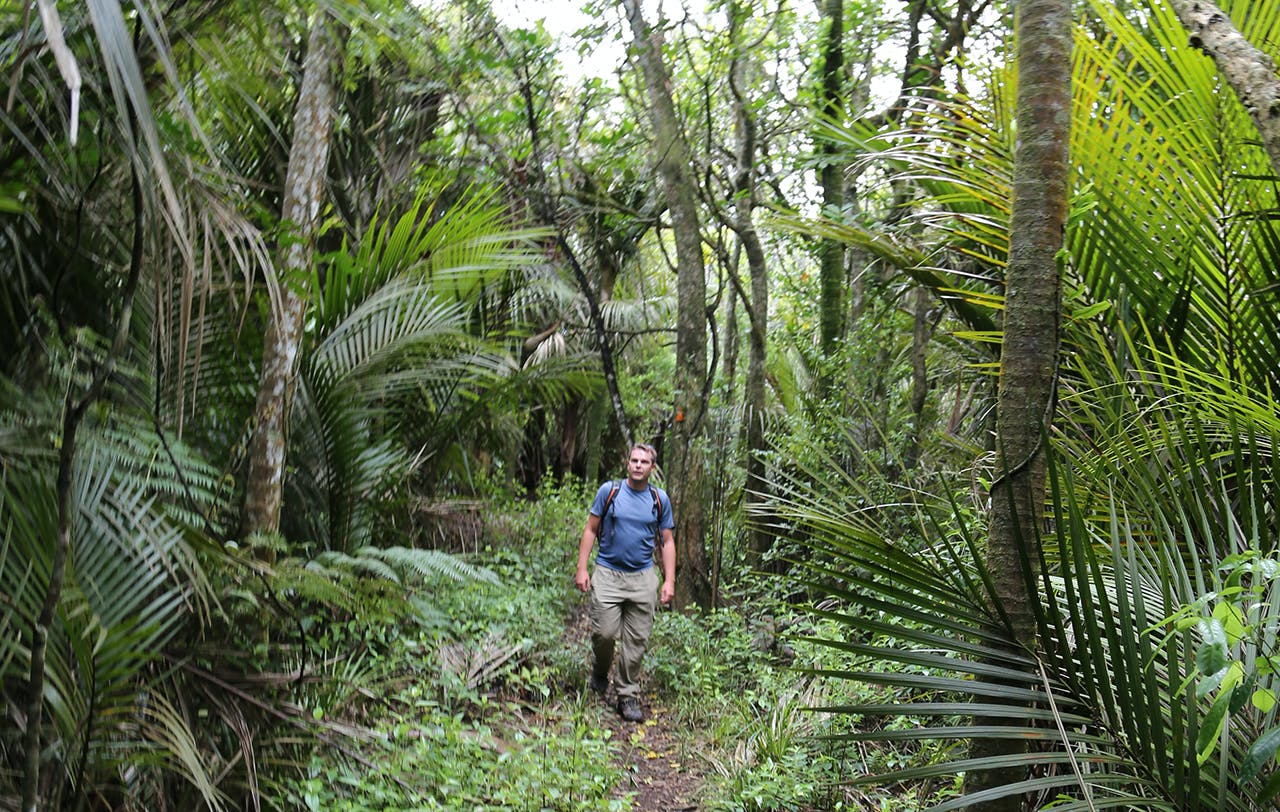 The Hakarimata Walkway is a rough ground trail but the bush is beautiful. Photo: Alistair Hall

The track is challenging as there are major height differences and markings are poor.

The section by the Timaru River is particularly arduous, and dangerous at times, while the climb from the river to Stodys Hut is gruelling for even the most hardened mountain goats. All the same, the views from Martha Saddle (and especially from the Breast Hill summit) are other-worldly and make the sweat to see them all the more worth it.

You will most likely have the panorama over Mt Aspiring, the Southern Alps and Lake Hawea all to yourself. Even though Breast Hill is close to Wanaka, it has stayed below the tourist radar. But it is a walk that shows the absolute best of New Zealand. Your knees will not thank you, but your inner adventurer will. 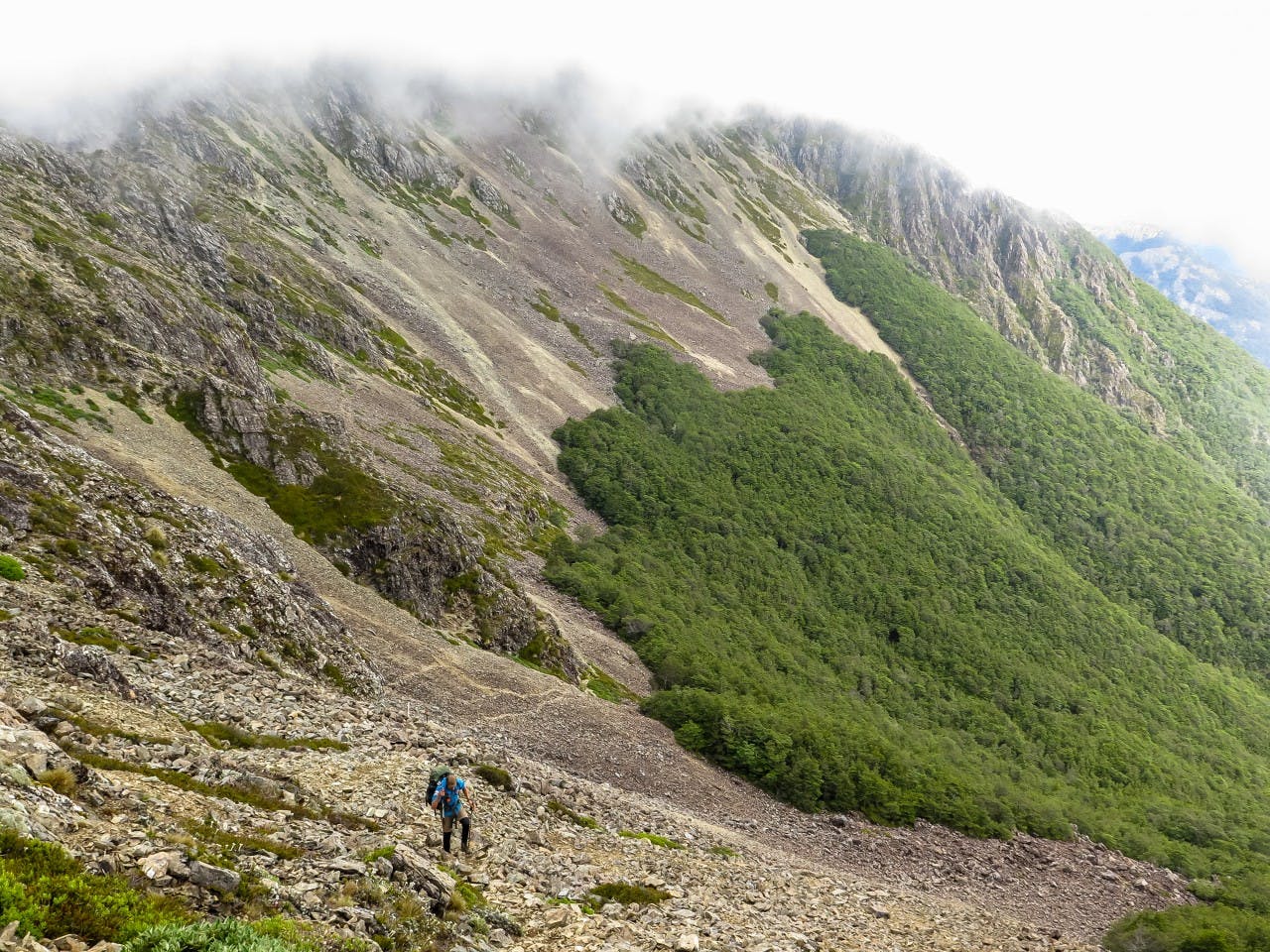 Ascending the rough track up to Mt Rintoul

The Richmond Range is a well-known stretch among Te Araroa walkers, yet appears to be seldom-visited by other trampers. It is one of the most challenging and most dramatic sections of the trail.

Trampers are led high into remote mountain territory, so good preparations are essential. In return, you can expect adrenalin-filled ascents and descents, magnificent ridgeline walks and stunning panoramas. In good weather, Mt Rintoul is an absolute highlight.

The going is rough, and the terrain bears witness to the raw power of New Zealand’s weather forces. There is a string of old-school huts dotting the route and providing welcome shelter from the elements.

This lonely mountain range is a complete outlier when looked upon from a distance, rising up from the flats far from the peaks of Fiordland.

Though not as dramatic as their northern neighbours, the Takitimu Mountains are unique in their own way. Red tussock and bare, black/grey rock are alternated with fairy tale-like beech forests.

The Southland climate often brings fog and cloud to the landscape, only adding to the magic. 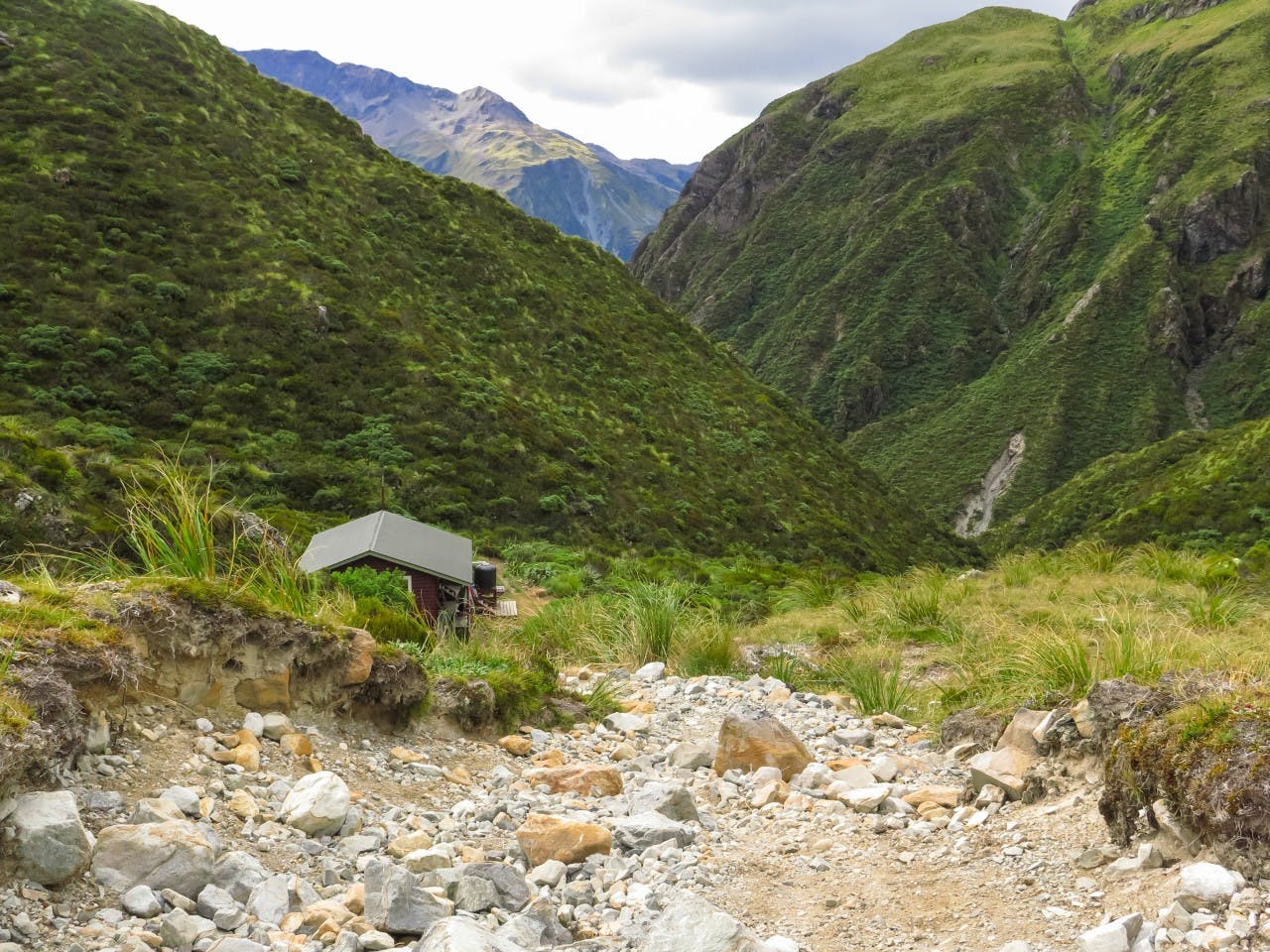 Goat Pass Hut with the Deception River below

Probably the best-known ‘hidden gem’, the Deception-Mingha provides a fantastic off-track tramping experience. Care is required when scrambling up the Deception River, crossing over and boulder-hopping as the terrain dictates. The track beyond Goat Pass, along the Mingha River, is better defined, though it still requires many river crossings.

At Goat Pass, Goat Pass Hut awaits, offering shelter and spectacular views of the mountain landscape. Keep an eye out for kea in the evening and morning.

There are almost no markers on this route, but finding your way is never difficult: just follow the rivers. A number of large and beautiful waterfalls add interest. 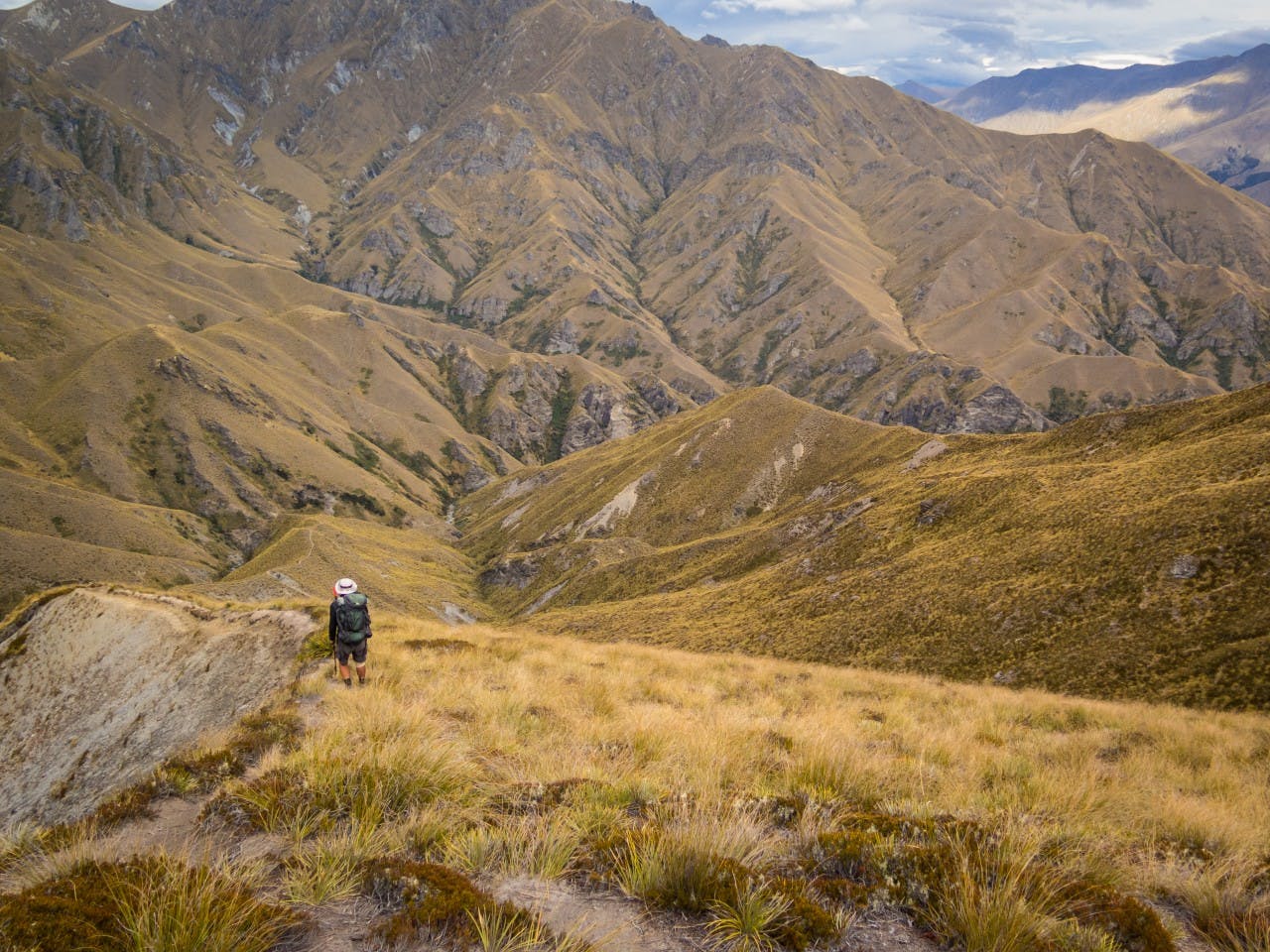 A steep descent on the Motatapu Track

Somewhat overshadowed by other great tramping spots in the Wanaka and Queenstown areas, the Motatapu Track does not get nearly the attention it deserves.

This stretch of dramatic trail is unlike any other. The land undulates with a jagged skyline; the terrain is steep and the paths narrow. The tops contain some of the most sweeping ridgeline walks to be found in New Zealand, and though it is hard work getting up and down those ridges, seeing the land endlessly folding and twisting never fails to amaze.

Walkers need to wade the clear waters of the Arrow River, adding to the challenge of the tramp. The river walk is remote and beautiful, ending up in historic Macetown, which provides a splendid end to the tramp. 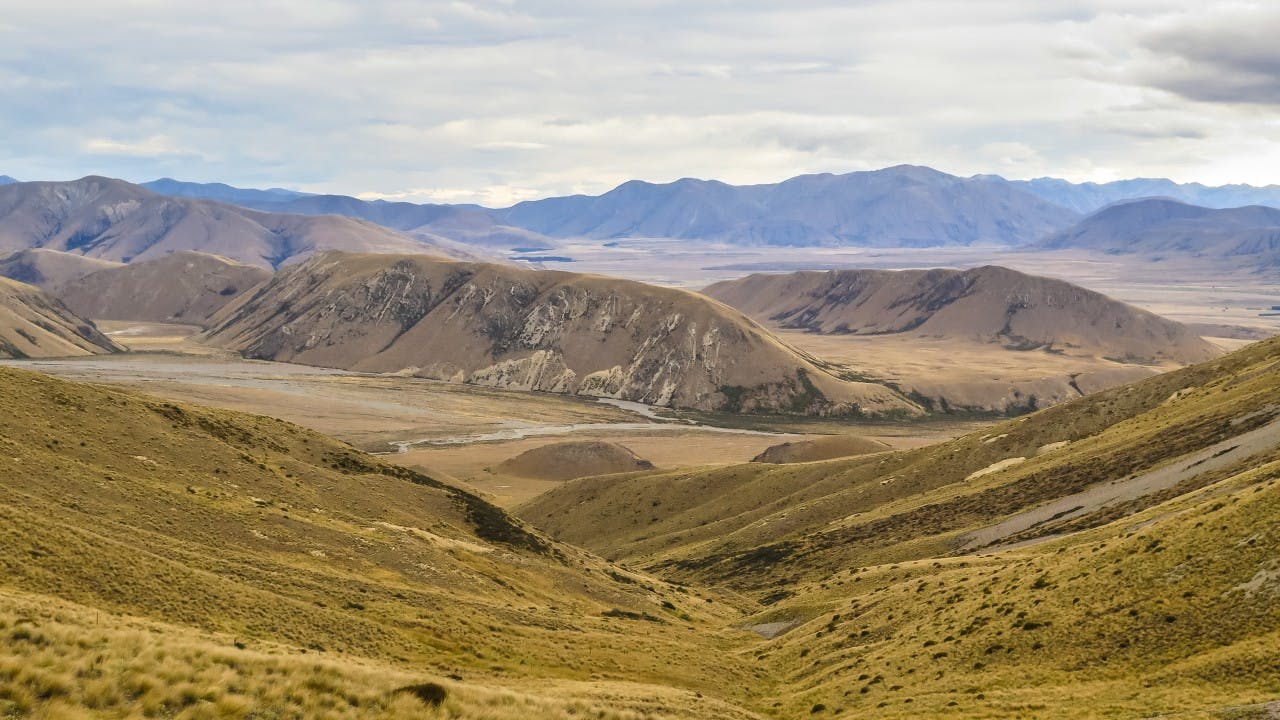 The section of trail running between the Rakaia and Rangitata rivers – two major hazard zones on the route – is a hard-to-reach for non thru-walkers. It begins and ends on desolate gravel roads and even thru-walkers regularly choose to skip it, heading instead straight from Methven to Tekapo.

For those who do make the effort , they find it was well worth it.

The trakc is located in Hakatere Conservation Park and passes through an empty landscape, a seeming no-man’s land where time stands still. The track is unformed, allowing for a feeling of really being ‘out there’, and follows natural lines such as Round Hill Creek (there are few Te Araroa trails in Canterbury which allow for dry boots).

The panoramic views over the hills and Lake Heron basin are jaw dropping. The basic huts along the way are old, but charming – a link to the past when deer cullers and high country farmers roamed the land.