Four wild places to see the raw power of earthquakes

On November 14, 2016, the Kaikoura earthquake provided a jolting reminder that not even mountains are immovable. Not only were the Seaward Kaikoura mountains shunted skyward by an unknown height, but their faces were scarred by hundreds of slips. One rockslide in the Hapuku Valley resulted in a dam and new lake, burying both Barratts Biv and Barratts Hut.

Earthquakes have played a major role shaping our mountain environment over millennia, affecting not only the topography, but also the vegetation. For example, when the magnitude-8 Wairarapa earthquake shook the region in 1855, so many slips resulted that the Rimutaka Range lost about a third of its forest. Many of the scars are still visible today.

Here are four sites where trampers and walkers can see dramatic evidence of past quakes. 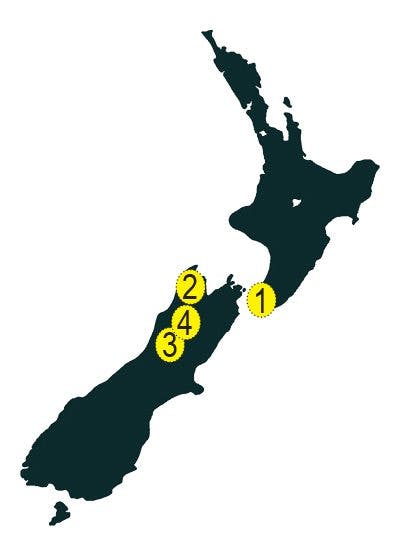 This headland marks the location where the Rimutaka Range, and indeed the whole North Island Mountain Axis, dips beneath the sea. Geologists treasure the place because past earthquake-induced uplift is clearly recorded in a series of five raised terraces. The 1855 Wairarapa earthquake was only the most recent of quakes that have done so, raising a new terrace 2.5m above sea level. The terraces are just one reason to visit; rock climbers appreciate the excellent bouldering, nature lovers can observe New Zealand fur seals, and botanists can admire the hardy plants that survive in this rugged environment. Access is along a 60-minute walking track from the end of Coast Road, south of Wainuiomata.

The northern West Coast and Northwest Nelson was ravaged by two large quakes during the 20th century: the 1929 Murchison and 1968 Inangahua earthquakes. The former had the greatest impact, and resulted in the loss of 17 lives. Not all destruction is ugly; Lake Stanley formed during this event (as did other lakes in the Karamea catchment). Situated in the Waingaro River Valley, the lake spans about 2km, and at one end the gaunt remains of trees killed provide testimony to the event. Trampers will pass beside the lake on the 4-5 day Waingaro-Anatoki Historic Pack Track, and can stay nearby at the recently built Soper Shelter tent camp.

At these impressive falls, the Maruia River cascades over a wide scarp. The falls were created when the 1929 Murchison Earthquake diverted the river over an old bank. At first they were only a metre high, but erosion has seen the drop increase to 10m. There’s a view of the waterfall from near the car park off SH65, and a short track to their base.

The cover of the landmark book, New Zealand National Park’s from the Air, featured a striking photograph from Lloyd Homer showing the huge scarred face of a mountain that during the 1929 Arthur’s Pass Earthquake had simply collapsed. This is Falling Mountain (1901m), which lies on the Main Divide between the Otehake and Edwards rivers. A 900m section of the mountain collapsed, sending millions of tonnes of rock and debris over Taruahuna Pass, and some 5km down valley. The result is still plainly evident to any trampers tackling the three-day Tarn Col tramp. Intriguingly, the name ‘Falling’ Mountain was chosen, not ‘Fallen’ Mountain, suggesting nature hasn’t finished with the peak yet.