Plenty of features in the backcountry bear the name of animals.

But what about features named after specific creatures? Here are four. 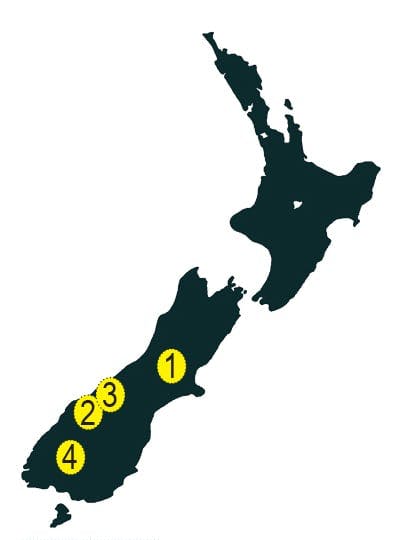 Co-founder of both the New Zealand Alpine Club and Federated Mountain Clubs, Arthur P. Harper should need no introduction to most backcountry enthusiasts. Harper climbed and explored extensively in the Southern Alps, and a mountain was named after him in the Waimakariri headwaters. Fewer people know that Mt Philistine (1967m) is named after his horse, after Harper made the first ascent of the peak in the 1890s.

Mt Betsy Jane, named after the dog of explorer Charlie Douglas, towers over the headwaters of the Wilkin Valley. The 2169m peak lies on the crest of the Southern Alps, with formidable bluffs falling to Snow Bridge Gorge in the South Branch of the Wilkin. There’s a fine view of the peak as you approach Top Forks up the Wilkin.

Douglas owned a series of dogs that accompanied him on his West Coast wanderings, and more than one was called Betsy Jane. However, the Betsy Jane in question was perhaps his favourite dog, and famously featured with Douglas in pictures taken during the mid-1890s. It seems the spelling Douglas used for his dog was ‘Betsey’, whereas the peak is spelled ‘Betsy’; but perhaps that can be forgiven as Douglas had a pretty idiosyncratic approach to spelling.

Topsey Peak (1672m) and Topsey Saddle lie on the Main Divide, separating tributaries of the Okuru and Blue Rivers. As this lies firmly in Mr Explorer Douglas territory, they were presumably named after another of his dogs, Topsey – as perhaps were a creek and falls on the West Coast.

In Southland’s Mararoa Valley, there’s a series of attractive lakes. A walkway runs up the valley, passing the lakes, and joins with the Greenstone Track, now part of the Te Araroa Trail. The lakes were named after a horse belonging to pastoralist and explorer David McKellar. Apparently, ‘mavora’ is a Gaelic term of endearment – which might suggest McKellar’s horse had a more amenable, god-fearing nature than Harper’s ‘Philistine’.