If you’re heading into the hills this autumn, you’ve a good chance of spotting and observing three big game animals. Greig Caigou shows you where to look

As a hunter, I often meet trampers in the backcountry who want to see alpine specialists such as chamois and tahr in the natural environment. My quick answer is that unless you’re heading into mountainous regions, you’re unlikely to them. But for those who do a bit of trans-alpine tramping, particularly at this time of year, there are ways to increase your chance of seeing not only chamois and tahr, but red deer as well. 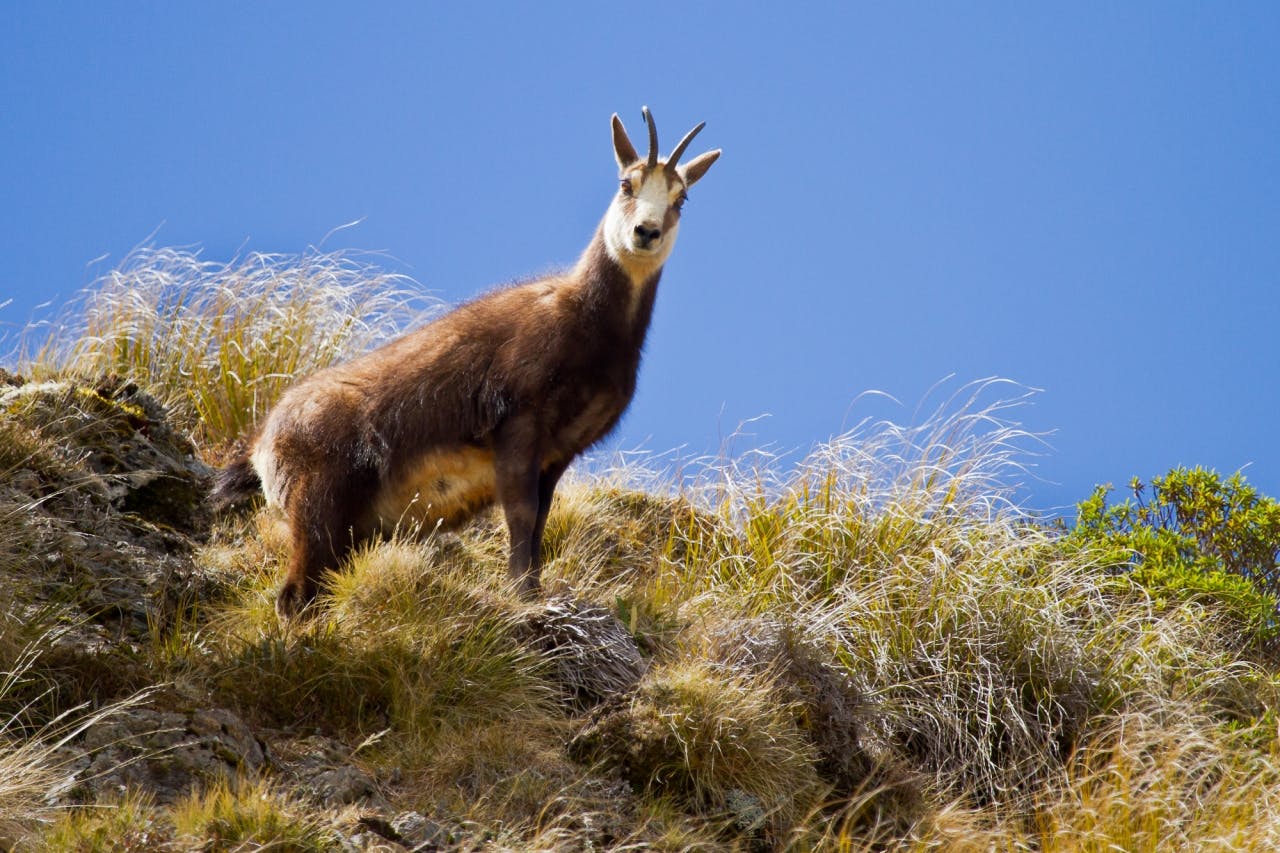 A gift of the Austro-Hungarian Emperor Franz Joseph, chamois were liberated in the Tasman Valley on the lower slopes of Aoraki/Mt Cook in April 1907. They have since spread throughout the South Island and can now be found living in quite a wide range of habitats including alpine bluffs, grasslands, herb fields and sub-alpine scrublands. But because they are so widespread, trampers might even spot them in low altitude river gorges, creek beds and Westland forests at sea level.

In summer, they are a lovely rich chestnutty shade of orange/brown with black framing on the legs and belly. Come autumn though, chamois go through the process of changing colour so that by winter they are jet black. Bucks develop a beautiful dorsal stripe of long silver-tipped hair.

Chamois are wonderful to observe and can be quite playful. High in the Lewis Pass area I once came across a gulch filled with snow. At the top of the snow chute were several young chamois and an old doe. They would run down the snow, drop to their brisket, legs splayed and then slide to the bottom of the chute where they’d jump up and gallop back to the top to repeat the fun! 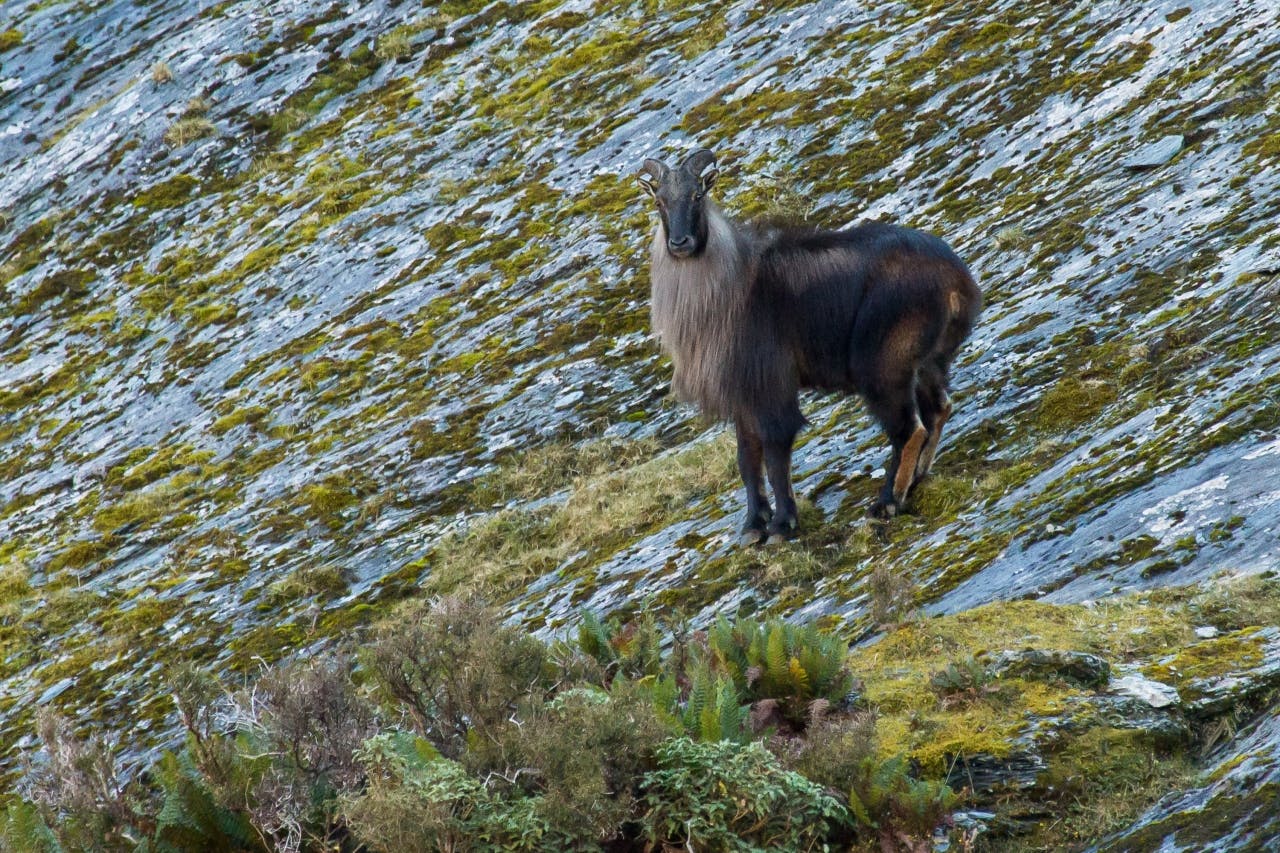 In spring, these animals range in altitude from around 900m early in the morning to 1300m where they bed down. During autumn, they will be found in the range 1300-1600m so to see them you need to be camped high or be viewing them from a distance with good optics.

The Himalayan tahr was introduced in 1904 and as much as is possible their spread is confined to a strict range and the population is managed at specified densities with both recreational and aerial-assisted killing occurring in hot spots where this is exceeded. Tahr love rock systems and are masters of the steeps, with hooves that have a flexible, rubbery core that allows them to grip smooth rocks and a hard, sharp rim which can lodge into small footholds. When put to flight, it is amazing to witness their skill in the gnarliest of terrain.

Female tahr (nannies) are gregarious and will generally always be in groups, so where you see one keep your eye out for others. Females are goat-sized and of light colour whereas the male is a much bigger and more solid animal. At this time of year he will be dark in colouration.

If travelling in the mountains of the West Coast, look for tahr near bluff systems rising out of thick scrub. In the eastern valley systems, tahr dine on tall snow tussock and mixed short podocarp scrub, typical of what you would find on tramps in the Ruataniwha and Hakatere conservation parks, or the Rangitata, Godley, and Dobson valleys. During the middle of the day they will invariably be amongst their lofty bastions of rock and crag. 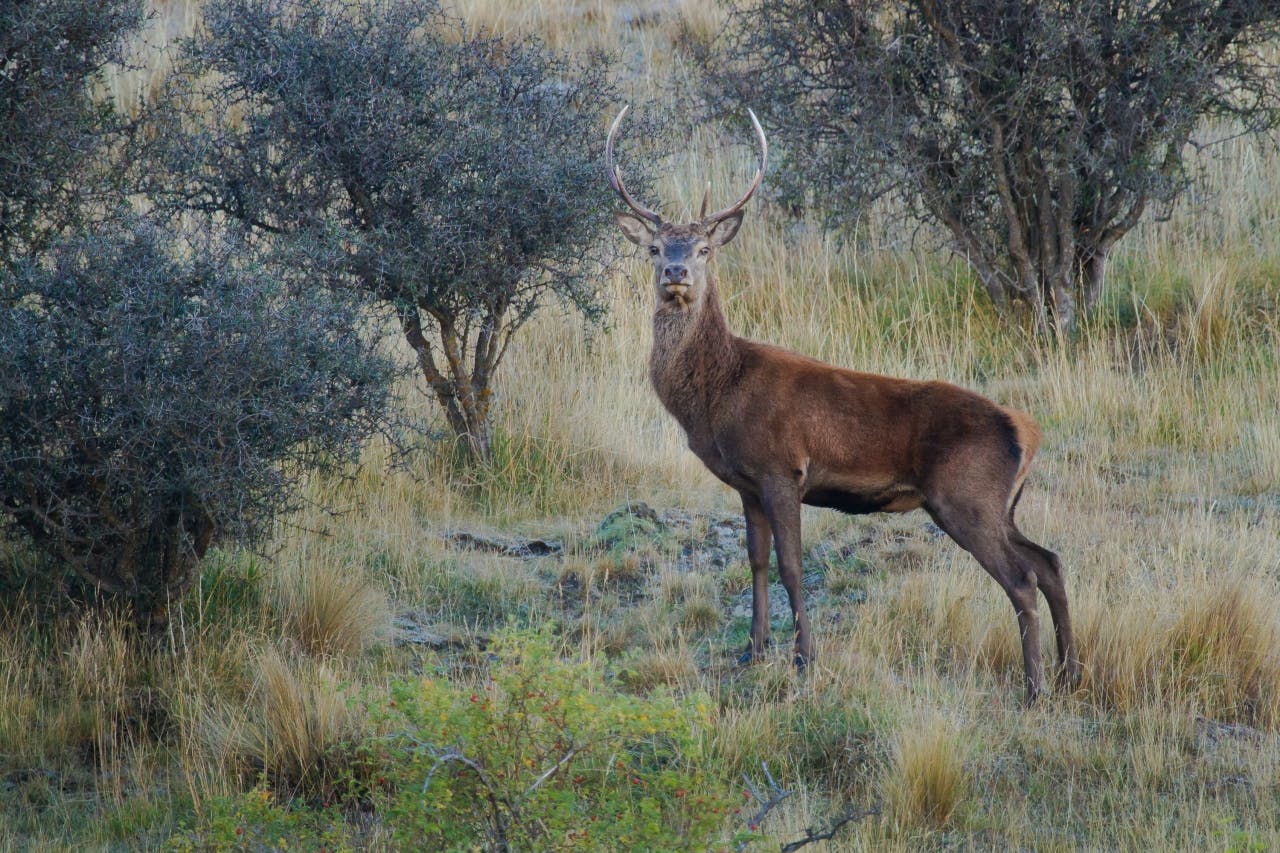 These are the most common of the seven deer species found in New Zealand and can be found along the valley floor as well as on traverses above the bushline. They can be found in all the main North Island ranges, favouring bush lands adjacent to lush feed of grasses.

These animals are very sensitive to smell and rely on this as their main mechanism for sensing danger. Air thermals usually dictate that a breeze will move up off the low country during the daytime, after the sun has started to warm the valley floor. Oftentimes this is when tramping parties are moving upstream on a journey into the hills. With their scent blowing ahead of them, the chance they’ll observe a deer are slim. If you want to see deer in this situation you are best to leave early in the morning or late in the evening. Better still, venture out for a pre-dawn recce before breakfast.

Deer are difficult to locate in the bush so the next best opportunity to see deer is on snowgrass tops. A fly camp with commanding views of the bush edge or fingers of bush that reach into subalpine scrub and snowgrass basins will offer a good chance of spying deer at this time of year. Binoculars definitely help and sitting at a lookout, glassing with these while munching on your morning muesli is a great way to mix it up in terms of views: there is the macro of mountain vistas contrasted against the more intense magnified details as you study the lay of the land through the binoculars. You’ll definitely feel a jump in your heart rate if a deer appears in your ‘far-lookers’!

Most animals follow a feeding pattern and it’s while they are eating that you have the best chance to observe them. Red deer will feed during the night on clearings – these are often near huts and good campsites. At the pre-dawn, the first bird-song is often the signal for them to start moving back into the cover of bush. If you are not positioned overlooking such areas before first light, you are unlikely to see them.

Chamois and tahr follow a distinct vertical pattern and generally do not feed during the night, but begin feeding at dawn and continue doing so as they climb until they bed down mid-morning at higher altitude. Here they will ruminate and are more difficult to locate until they begin their afternoon feeding and start descending again.

There are seasonal variations to where you will locate animals. On top of this, gender, family groupings and food requirements influence likely locations. At the tail end of summer and heading into autumn, family groups made up of females with their young and previous years’ juniors, will all be found grazing together, usually with an older female ‘on watch’ above the grouping. Approach such groups with a watchful eye out for this sentinel. A shrill whistle means the game is up. They know you are there and will generally flee. (Sometimes, if they are not sure of what you are, the animal may stay put and their whistle can be handy for discovering tahr or chamois that you might not have known were present. Lay low or get behind an obstruction for a time and you may well get another chance at getting closer.)

At this time of year, chamois, tahr and red deer go into their annual mating periods, starting with red deer throughout April, with chamois and tahr following. As males search out females, there is a lot of animal movement.

Red deer will be quite vocal, with loud and guttural ‘roars’, giving away their position. For tahr, expect to find the larger bulls moving out of their bachelor herds and towards the herds of females. Find the girls and you’ll start to soon see the boys. You most likely won’t observe any aggressive behaviour, but the bulked-up displays by the bull will be impressive, especially if you catch them out on wind-swept spurs and rocky outcrops where the wind flares their mane. They will spend a lot of time just standing, conserving energy for the coming winter months.

Make time Go for a quick recce before breakfast. Be up and away early, or take time toward the end of the day being able to retreat to your campsite by headlamp

Photography Most modern digital cameras have good zoom functionality, but for the photos to be any good you’ll need the support of a tripod or level base to rest the camera on

Stalk Keep out of sight, using the lay of the land and natural cover. Keep your profile low, face shaded and move slowly or only when the animal is feeding or looking away. Endeavour to keep any breeze in your face and approach from above if possible.