Access
On the Tophouse road, just past the turn-off to St Arnaud, look out for the sign to Red Hills Hut

Living in Nelson has given me plenty of opportunity to explore the ranges of Mt Richmond Forest Park, the under-rated tramping nirvana that is home to nearly 30 backcountry huts.

Being a member of a tramping club has been a great source of inspiration, as we share local knowledge and experience with each other.

With a long weekend approaching, I proposed that our club do a moderate trip so as to attract a broader range of participants. My teenage nephew joined our seasoned members, and fits in with the family of five from Search and Rescue. I note that our ages range from 15 to 50; a good spread for a tramping club party of 10. Our objective over the four-day weekend is to tramp from Tophouse back to Nelson. However, my penchant for bagging peaks will lead me off the beaten track into the unknown.

On Good Friday we are dropped off in the Wairau Valley, skirting round Rainbow Station to the road up to Red Hills Hut, a welcome relief from relentless sunshine. Four kilometres down Maitland Creek into the Motueka River, and we are all sweating like proverbial piglets in the 22 degree heat. Crossing the Motueka River to the site where Maitland Hut once stood proud, we search in vain for a shady lunch spot. Later on, we shelter under a rare copse of totara and red beech.

During the golden hour, we boulder-hop up Lowther Creek, racing the impending darkness to find Porters Creek Hut. This bright orange NZFS six-bunker squats on a boggy plateau under Porters Knob, in the middle of nowhere. There is no decent water supply here, merely a shallow tarn, but beggars can’t be choosers. We’ve been hiking under a blazing sun for the best part of eight hours, and despite being very fit, the heat has sapped our strength. With a couple of our party tenting outside and a few youngsters on the hut floor, we spend a cosy night.

Saturday sees us saunter along a roughly-marked route around the reddened rocks, up over spurs and down steep scree slope. Rough underfoot with blue skies overhead. 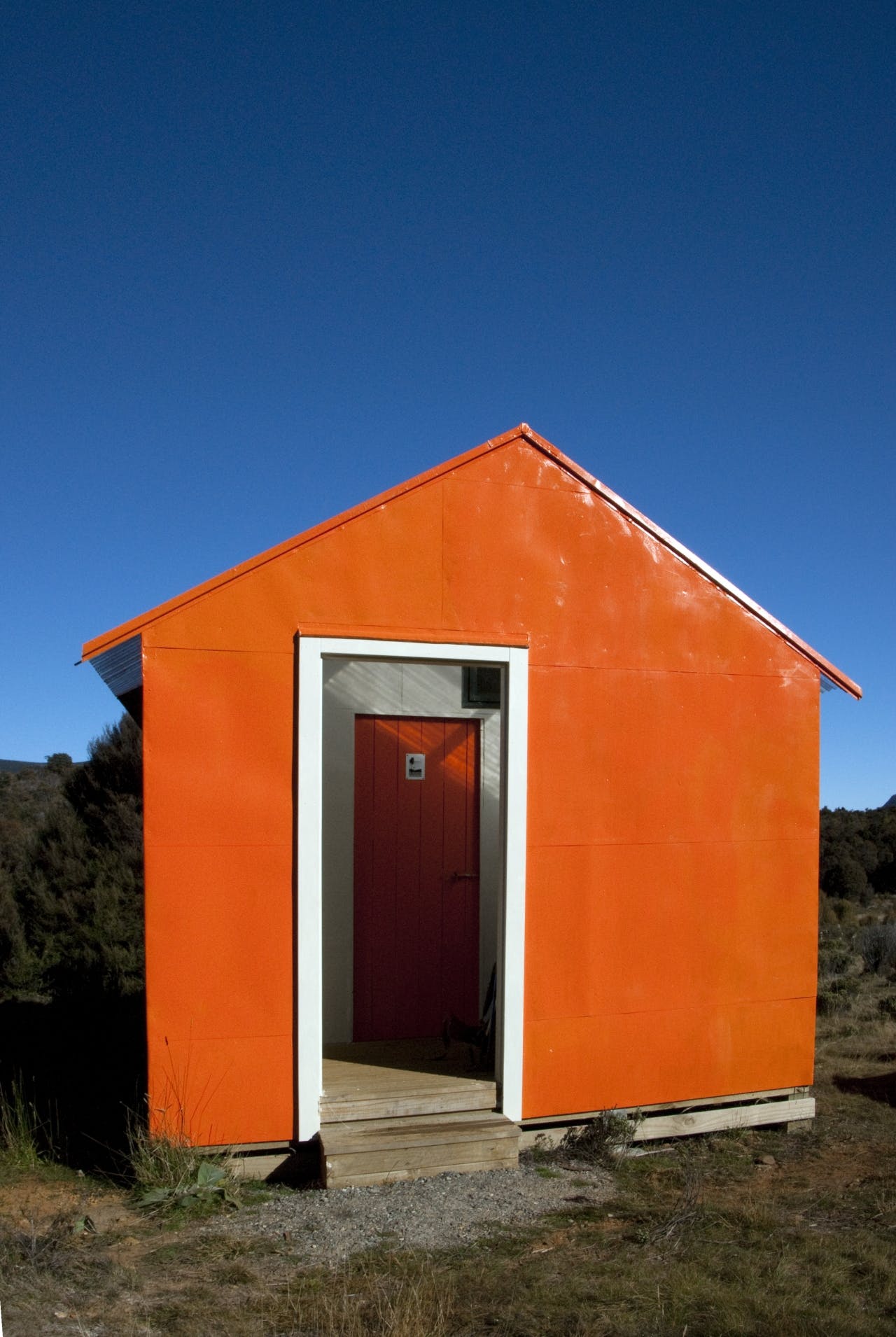 We cross the wide expanse of Ellis Stream; a grunty climb up a scree ensues, topping out on a low saddle where we lunch in what precious shade we can find. This is open country with only occasional stands of ti tree; the mineral belt, where only few plant species can survive. It consists mainly of serpentine rock, plus dunite, an almost pure olivine rock. Due to lack of competition, some normally high altitude plants can be found lower down. Furthermore, a number of mineral belt specific plants and plants endemic to the Red Hills are also present.

Traversing a landslide proves slow-going and requires precise footwork as we look out for elusive orange markers which are fastened tenuously to manuka, broom, or turpentine scrub.

Inevitably, Hunters Hut has habitants – two ageing Scouts plus some latecomers. We camp on the heli-pad, as there is scant flatness to be found. Our two teenage boys do an admirable job in providing a campfire around which to assemble the party. We entertain each other with magic tricks and word puzzles.

A plaque on the hut wall is a sombre reminder of the risks we face in the remote backcountry. Hunters Hut is a modern memorial for Bush Edge Hut which was destroyed in a flash flood in February 1995. The two DOC staff sleeping inside perished as the hut was swept down the Motueka River.

A full moon climbs the sky above the monolithic cone of Mt Ellis, and we fall into a well-deserved deep sleep.

We fill drink bottles, mindful of the scarcity of water in this parched wasteland. The regular route heads up the Motueka River headwaters, but most of our group have ‘been there, done that’. Our unconventional route begins behind the hut and clambers through scrub onto the open tops of Porter Ridge. Two picturesque tarns are photographed; the reddish clay lake bed contrasts with the polarised blue of reflected sky. We replenish water supplies, then meander along shattered scree to the start of the Red Hills Range proper. Far, far, below, the Wairoa River Right Branch headwaters are a silver ribbon trickling through a dust bowl of fallen rubble. 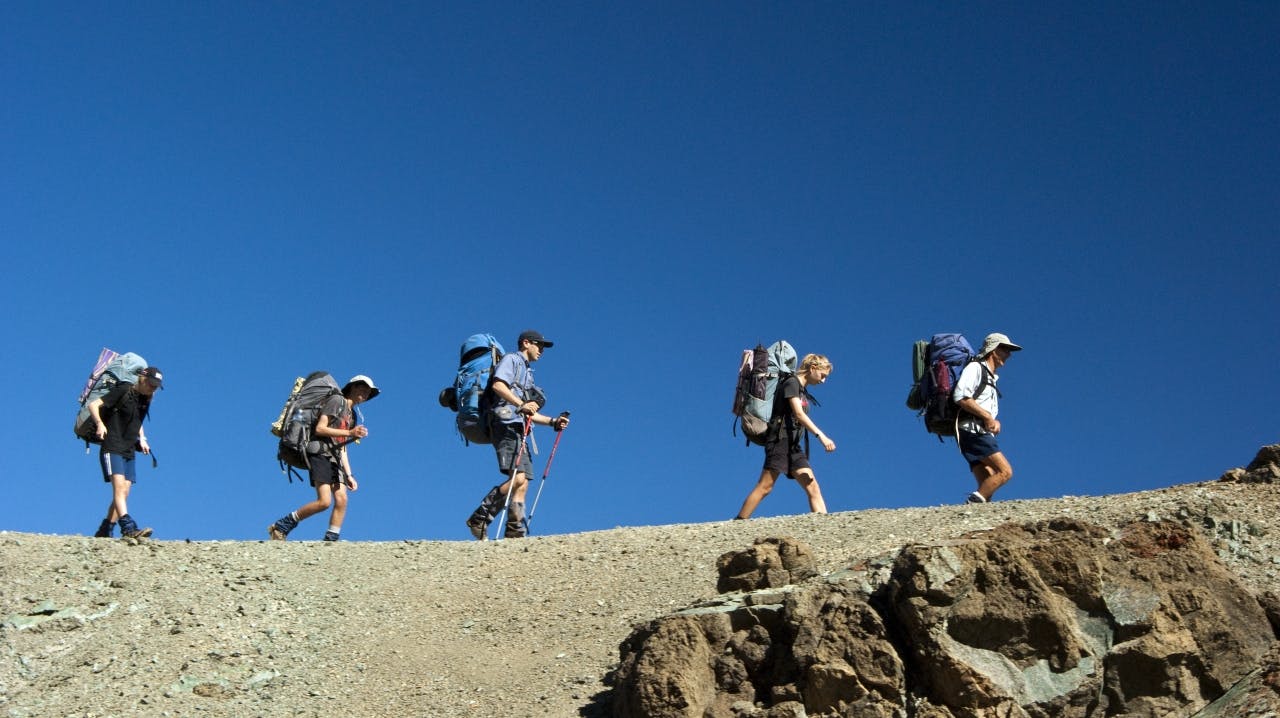 This is where I depart for the scorched summit of Red Hill, at 1791m the highest peak in Mt Richmond Forest Park. No one wishes to join me, as they’ve already ‘been there, done that’, on several previous trips. I am the eager newcomer to Nelson, brimming with fresh enthusiasm; or perhaps I am the village idiot who has the requisite foolhardiness to climb solo rather than follow the status quo. One can have just enough knowledge to get into trouble. And, in my case, a locator beacon to get themselves out.

The afternoon is nearly spent when I get as far as the first of the five summits of Red Hill. A series of bumps in a long ridge, the higher knobs require nerve, concentration, and a great deal more time than I have. The skin on my hands feels coarse, like 200 grit sandpaper, after clambering over jagged rocks. My boots are shredded by this ultramafic, serpentine geology; my body is dehydrated – it is time to turn around.

A few photos were snapped of the surrealistic lunar landscape, before the punishing return journey to my gear stash. Descending to the Wairoa Left Branch saddle, the solitary marker pole defies a biting wind. I drop into the shadows, stumbling down a torturous path searching for random cairns, chasing the fading light to Top Wairoa Hut, where my party are snuggled around the fire. Again, the boys have done themselves proud with their proficiency at pyromania. I drink dangerous quantities of tea and read the hut book. I notice that many foreign trampers complain that the Wairoa Gorge is the most dangerous section of the Te Araroa Trail they have encountered since departing Cape Reinga. Their written accounts are persuasive enough for us to devise a substitute route back to civilisation.

As the first rays of an autumn sun illuminate the tin chimney, our party have long gone. I am left to my lethargic state of mind, deciding to be Tail End Charlie. I catch my nephew within the hour, before regaining the saddle. Our party is huddled in the chilly wind, waiting. 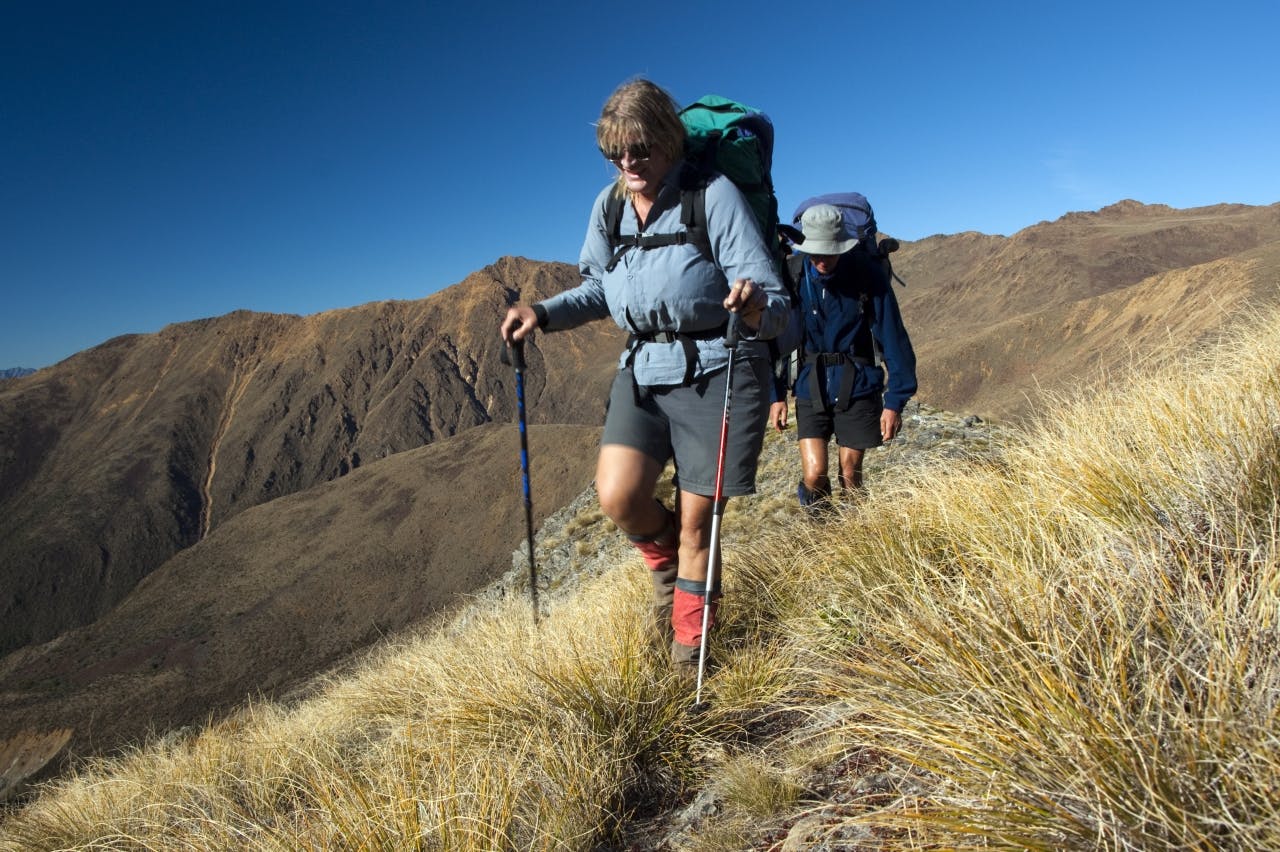 I lead up a broken spur, due north to a tussock knob. There are no willing partners for my next peak-bagging adventure – they have apparently ‘been there, done that.’ While they take off at lightning speed for the distant beacon of Ben Nevis, I do a detour up Mt Ellis. This costs me a mere half hour, but requires a huge effort to catch my colleagues.

My legs are screaming blue murder as we trudge up shattered rocks, weathered by the freeze-thaw effect of winter snows. We are dancing along the mountainous spine that separates the twin branches of the Wairoa River. A couple of gnarly guts and exposed ledges slow our progress to a crawl, and with dehydration, it takes us about eight hours to exit.

Northward we wander, negotiating a string of 1600m peaks before the final ascent of Ben Nevis. Regrouping by the diminutive trig station here, I am out of water, and out of energy. Stumbling down the now-familiar trail, we are glad to be back into the beech forest, accompanied by friendly robins. Down, down, down, 800m vertical descent into the pine forest, the car park, our waiting vehicle, and the ice cream shop.

I am a spent force, but I knew my fatigue would only last a few days; my memories would last a lifetime. I too, have now ‘been there, and done that’.