Access
The trail begins at Greymouth and ends at Ross

Will the West Coast Wilderness Trail do for small West Coast communities what the Otago Central Rail Trail has done for Otago? Roy Sinclair meets the canny and sometime eccentric small business owners who are hoping to ride the gravy train

New Zealanders rarely experience anything like this, Paul and Rosie tell us.

From Rangiora, they are cycling the West Coast Wilderness Trail.

“We saw trout swimming in a clear stream. A throaty tui was nearby. A kereru glided overhead and a curious weka inspected our bicycles. Absolutely amazing.”

We had paused to share experiences with Paul and Rosie during the day. Having pedalled 36 km (about 3hr 50 min.) from Kumara to Cowboy Paradise, we have met again  over a deserved cold beer at our overnight stop. We chat about the quality of the trail and especially the bridges constructed over, sometimes, steep ravines.  Our day’s cycling concluded on a steep switch-back descent.

Cowboy Paradise is at Milltown – no longer a town, it remains the name for the valley. Six kilometres of the Wilderness Trail pass through Mike Milne’s property. Milne is principal cowboy and our exuberant host. We meet him in his rustic saloon.

He is a guy with a dream derived from a passion for Western movies.

His Cowboy Paradise is a work in progress, presently more like a construction site.

The view from the Saloon’s window overlooks the Arahura River. Misty cloud mingles with forest and skims mountain tops. Bird life is prolific.

His long ‘Main Street’ will one day be lined with bustling saloons.

He plans a blacksmith’s shop where bicycles can be repaired, a sheriff’s office and jail accommodation. Clients will have the key to the jail door.

“Most people live in concrete jungles. Cycling through a rain forest is an amazing new experience,” says Milne, who hails from North Canterbury. Rather than embracing a dairy conversion, he purchased a beef property inland from Hokitika.

“Every self-respecting cowboy will have a herd of beef,” he muses.

He plans to cater for functions, including weddings, while providing for cyclists stopping overnight. At present he offers worthy accommodation. 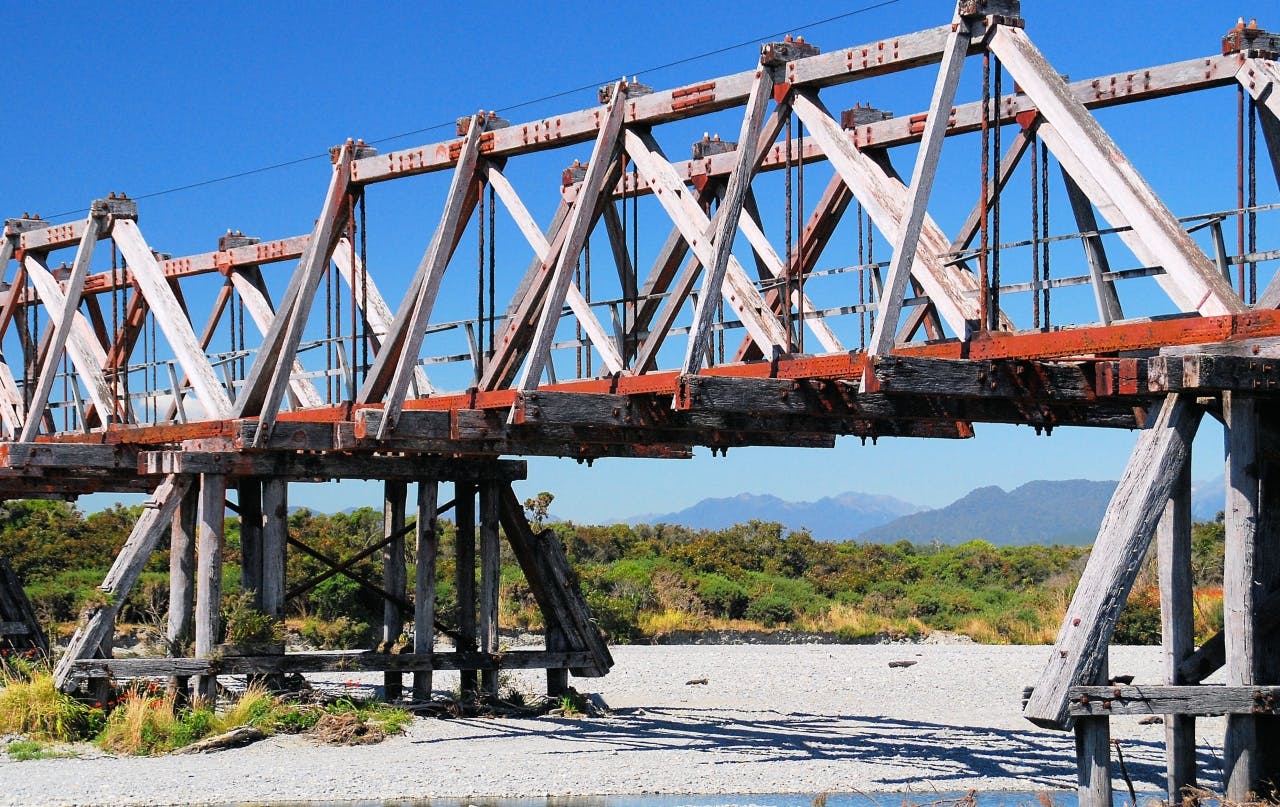 It is hoped the Totara River rail bridge will become part of the Wilderness Trail. Photo: Supplied

Allowing the cycleway through his property “was a no-brainer.” He was already embracing adventure tourism.“I was waiting to be swamped by young lycra-clad people. But it is mostly retirement aged cyclists,” he laughs, looking us over.

He sees many vehicles with bicycles on racks and hears of bicycle shops experiencing a boom.

Following a comfortable night and breakfast, we leave Milne presiding over his main street. He is sporting a sheriff’s badge and carries an1894 Marlin lever-action rifle slung over one shoulder. A Vaquero revolver is on his thigh.

Paul and Rosie get a head start. My partner Haruko and I enter a spectacular avenue of tree ferns on a glorious winding downhill trail to the Arahura, also known as the river of pounamu.

Haruko and I are bicycle travellers having cycled the length of Japan and Britain along with the French and Swiss Alps and Nordic regions. We regard the Wilderness Trail as primarily for cycling travellers rather than mountain bikers.

The trail opened in November 2013 and, as with Cowboy Paradise, it is a work in progress. Starting on Greymouth’s flood wall opposite the railway station, it takes a scenic route to end 136km further on at Ross. It brilliantly comprises ocean-side trails, mountains, old reservoirs, lakes and rustic history.

It is already breathing new life into a previously decaying town.

The Wilderness Trail inspired Kerrie and Mark Fitzgibbon to rebuild Kumara’s 1876 Theatre Royal Hotel to provide accommodation, a bar and restaurant. Their daughter and son-in-law are creating plush accommodation in a former Bank of New Zealand. 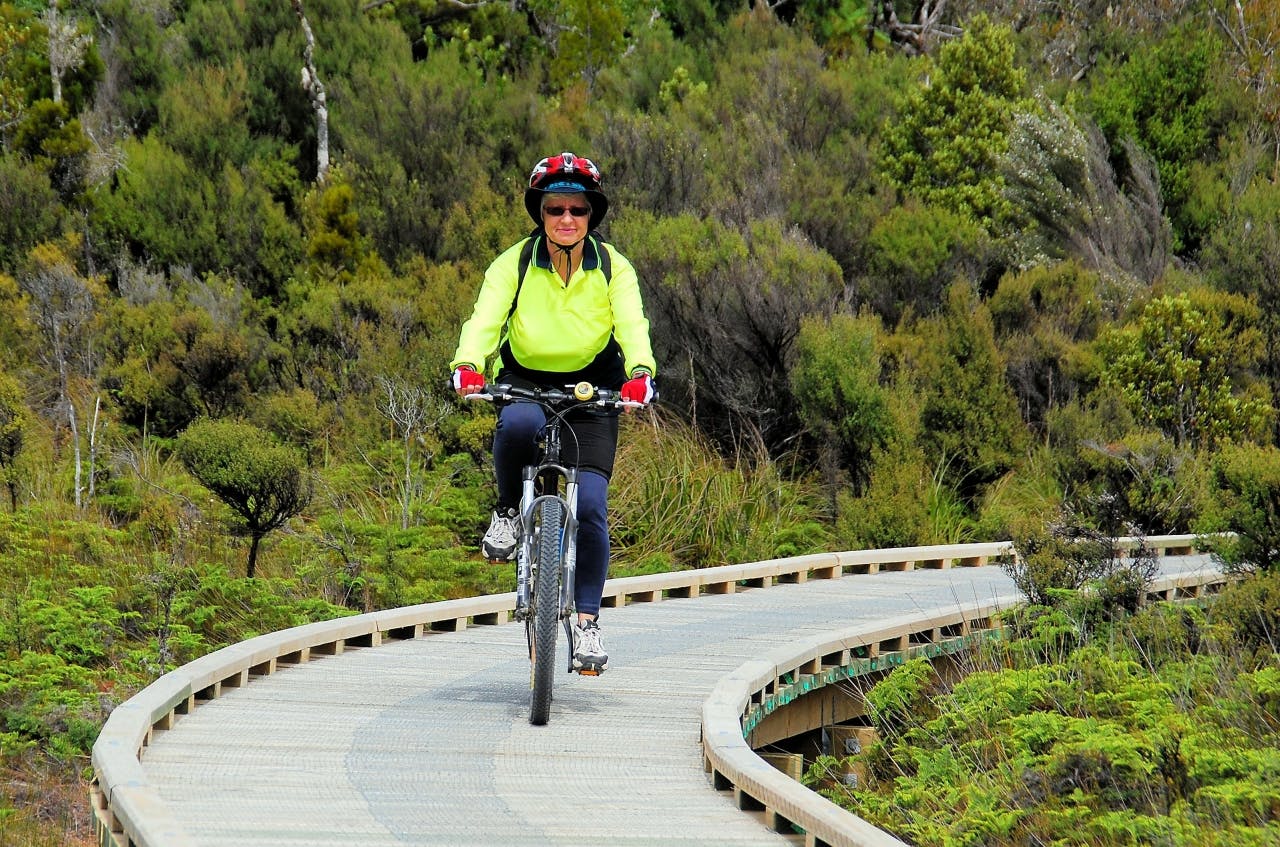 There’s plenty of easy riding on the trail. Photo: Supplied

Kumara had all but fallen off the map. The gold dredge ceased working 30 years previously and government-decreed conservation felled Kumara’s bustling forestry industry.

The Fitzgibbons were encouraged by the success of the Otago Central Rail Trail but believe the West Coast Wilderness Trail is even better owing to its diversity.

Kerrie Fitzgibbon is fascinated by history and particularly that of Kumara, scene of New Zealand’s last gold rush when the hotel’s theatre attracted performers from around the world.

“We are experiencing a new gold rush, but by bicycle,” she says. “But what a gold rush. So environmentally friendly.”

She says there are many options for cyclists, including having hire bikes delivered. People can travel to the Greymouth start, as we did, on the famed TranzAlpine rail journey and yet another option is to fly home from Hokitika.

Fitzgibbon particularly recommends the mild West Coast winters for the ride, when the “weather is settled and mountains look their best”.

A couple of hours after departing Cowboy Paradise, we pause at stunning Lake Kanieri and offer advice to an English tourist cycling towards the Wilderness Trail. We remain on the road to Hokitika. (That section is still being constructed.) Our Hokitika host is Mike Keenan, events guru with Westland District Council. Keenan was a pioneer of the trail, searching out suitable routes on his days off.

Keenan also claims to be an instigator of the New Zealand cycleway project. His sister living in Christchurch cycles with Prime Minister John Key’s sister – perhaps an influence for the PM to announce the national cycleway project.

Keenan’s enthusiasm for the wild West Coast is contagious. He introduces us to developments on the final section to Ross, scheduled to open later this year. We ride the Lake Mahinapua bush tramway trail and visit the thriving nearby treetop walk where we experience a rare birds-eye view of the forest.

Keenan is keen for the trail to pass close to the Treetop Walk café. 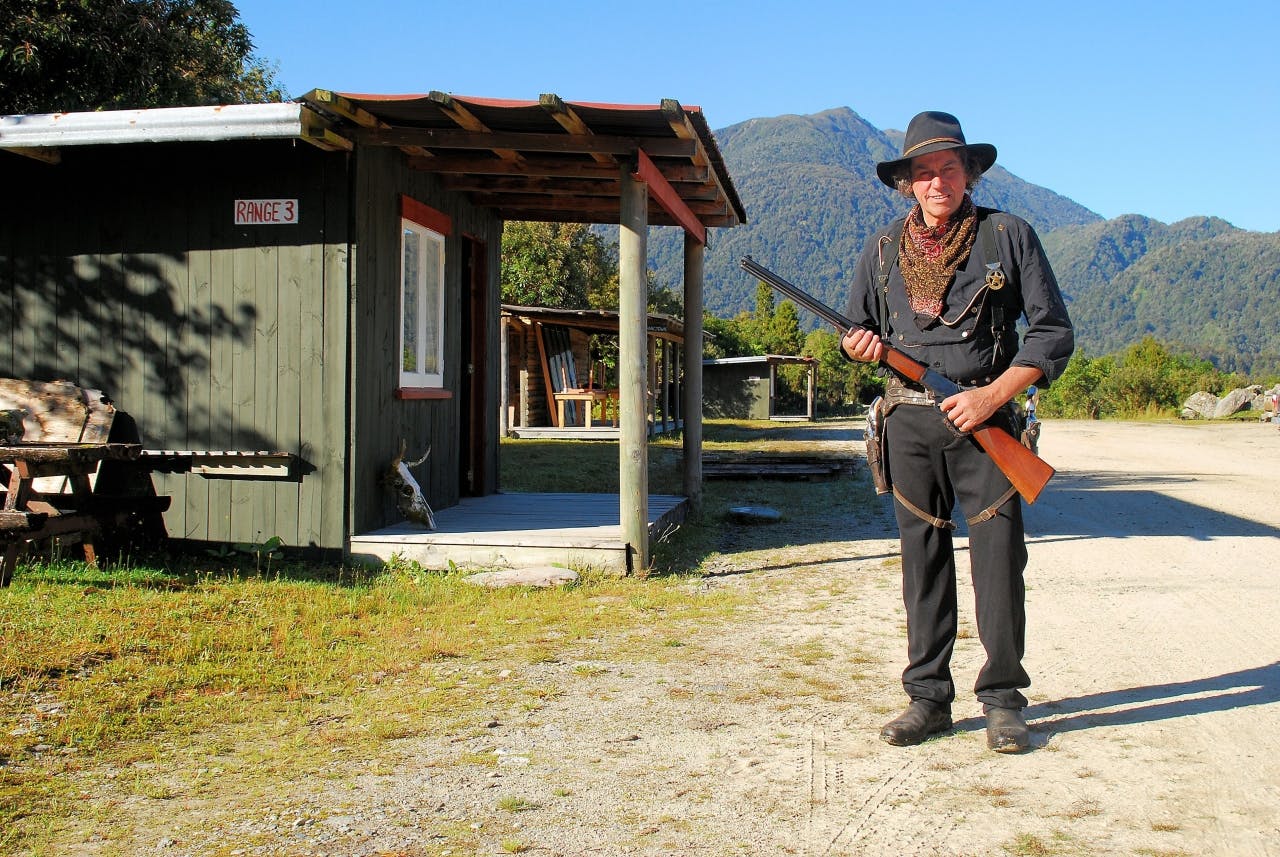 He sends us off to try sections of the trail still being constructed and we scramble precariously, without bikes, across the former Totora River rail bridge. Keenan hopes it will become part of the trail, citing history and heritage as being draws for trail users.

He tells us about people toiling on the trail near Ross. “They were clearing tall scrub and suddenly looked up. They were wowed by an unexpected view of New Zealand’s two highest mountains, Aoraki/Mt Cook and Mt Tasman. How good is that?”

Chinese gardens are planned for Ross and Kumara to commemorate the Chinese contribution to the West Coast gold diggings.

When fully completed, The West Coast Wilderness Trail will ideally be pedalled, in one direction, over four not-too-strenuous days. It is already ideal for families looking for a soft adventure.

Our Rangiora cycling companions say they will revisit the trail from time to time, to see how it develops. They will not be alone.