When a storm unleashes its fury on the West Coast, David Short discovers a safe-weather circuit in Leatham Conservation Area amidst a landscape that typifies high country New Zealand: Molesworth country

‘Weather warnings,’ I hear Jim Hickey say. ‘Low 900s,’ he exclaims with unmistakable glee. I watch as a deep low pressure system unleashes itself on the West Coast. His voice washes over me as my mind sifts through plans and ideas that are unravelling before my eyes.

I need to go east, yet the shadows lengthen and wind swirls as I hoist my pack and pat my dusty car goodbye. It has been 70km of gravel road through the Molesworth interior to reach Saxton River Bridge where I now stand. Molesworth Station, New Zealand’s largest farm.

It sure does feel vast. Rakiura/Stewart Island is roughly the same size, but in no way similar. As I set off upstream I am reminded of Central Otago. Surrounded by a tan coloured landscape, I ponder the coming days and hope that the vast mountains to the west buffer me from the worst of the storm. 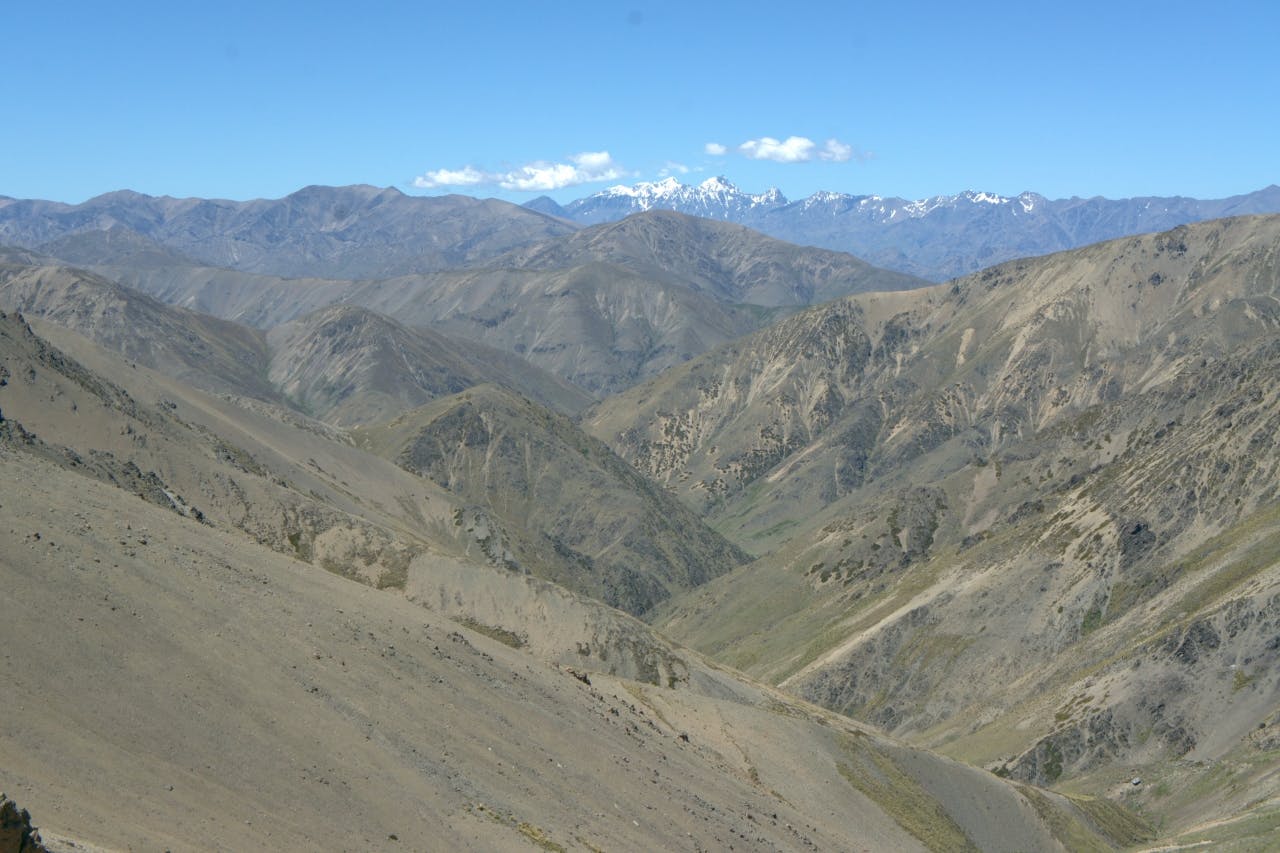 Saxton Hut is reached after an hour’s easy upstream travel and three river crossings. The hut looks new – just like the route I am attempting. The hut is situated conveniently at the confluence of Saxton River and what is known locally as Boundary Stream. The first major confluence on the true right. Saxton Hut is not actually new. It was once called Quartz Creek Hut and was located in Mt Richmond Forest Park. In 1983 it was moved to a different area in Mt Richmond and renamed Boulder Stream Hut. Then in 2012 it was moved again and given a complete renovation before being reassembled at its current location. Both location and hut are stunning. I spend my first night photographing the area and watching the wind and rain build.

The following day is not so easy. As expected, I awake to a storm but the mountains to the west are doing their job keeping the worst at bay. I am encouraged to see the river still running clear and the wind is mild. I journey upstream, heading north. This whole catchment is used to graze some of the 10,000 cattle run by Molesworth Station and can only be accessed without a permit during the months of May to December. Despite the obvious grazing detritus, I am rewarded with relatively unhindered off-track travel. After about an hour, there’s a Molesworth mustering hut known as Team Hut. It is in poor condition but provides shelter for a few minutes as I don over-trousers to block the cutting wind that has built outside.

I travel for 10km over undulating terrain, crossing the river many times, following stock trails where I find them. The pasture has been invaded by a flatweed known as hieracium. It grows dense and low, preventing more useful grasses from sprouting and limiting the feed available to stock. It does, however, allow for easy travel. 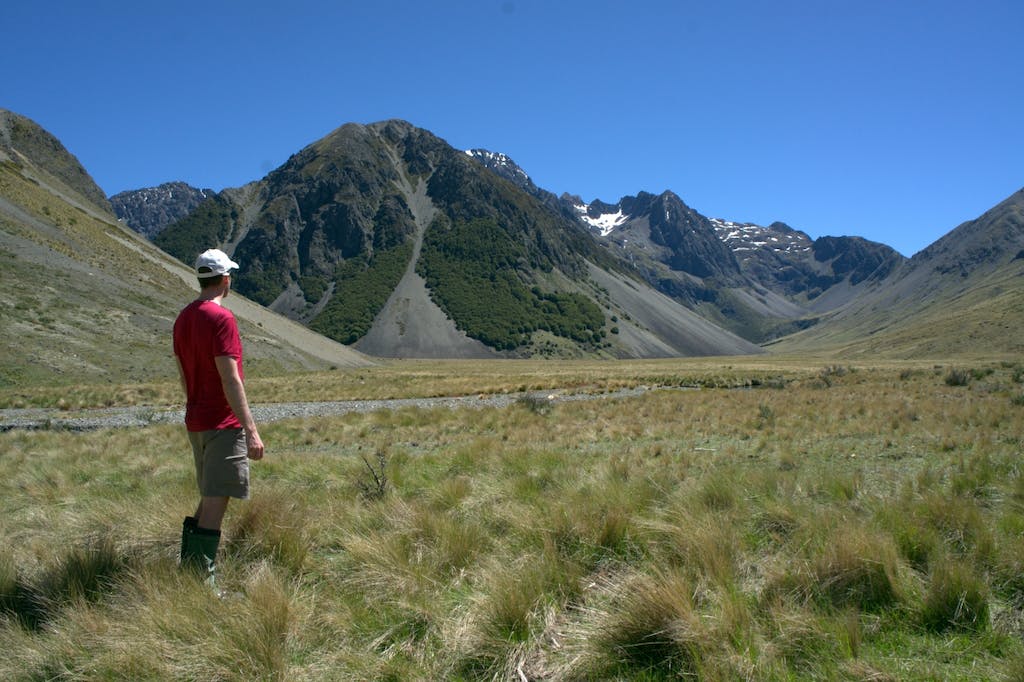 As I approach the upper reaches of Saxton River, grazed grasslands give way to bushy red tussock and large flowering Spaniard grasses. The valley floor opens out to reveal broad grassy plains. I jump a fence and climb to Saxton Saddle. From there an obvious gully and stream is followed steeply down to Top Gordon Hut. Here you see the first evidence of the farm’s other nuisance; wilding pines.

Top Gordon Hut is perched on a sunny terrace just above the confluence of Gordon Stream and the intriguing Wildsheep Stream. The surrounding forest is a mixture of beech and wilding pines. The hut was built in 1968 by the Forest Service and has been upgraded to include a log burner and better weatherproofing. I spend the afternoon drying off under a clearing sky and reading comments in the hut book. I have strayed into the domain of the hunter and, apart from a group of three Nelson trampers who happen to be one day in front, this circuit I am travelling appears not to have been completed before.

From Top Gordon, the track follows a mixture of beech forest and river gravels downstream. Wilding pines become predominant but only slightly detract from the surrounding high craggy mountains. The track sidles high on the true left to avoid a gorge before dropping back to open gravels. It criss-crosses the stream a few more times before reaching a swingbridge where a 4WD road leads to Bottom Gordon Hut. This hut is accessible from a long road originating from the Wairau River, suitable only for 4WD vehicles. I meet a couple who have driven in with the local 4WD club to assist the Department of Conservation in wilding pine control. We have a brief exchange about their valuable but seemingly futile work before I continue south down Leatham River, keen to avoid meeting other motorised travellers.

The Leatham Valley Track switches between open river travel and meandering between mature pine trees and is altogether very pleasant. At points there are large grassy fields filled with enormous Spaniard bushes. If you keep your eyes peeled you may spot the Craspedia ‘Leatham’, commonly known as the Leatham woolleyhead, a nationally endangered flower found in damp, wetland areas of this valley. The track spends most of the time on the true right where I climb, following the bulldozed trail, to avoid a narrowing in the river below. One last crossing of the river, about two-kilometres below Top Leatham Hut, and the track passes through a short stretch of forest before opening out onto a broad clear spur with the night’s lodgings in view. From my vantage here, I get a spectacular view of the head of the valley and Severn Saddle, the objective for tomorrow.

Arriving at Top Leatham, I again find myself resting in a newly refurbished hut. I sit outside under clear skies and am pleased to note there are no sandflies. 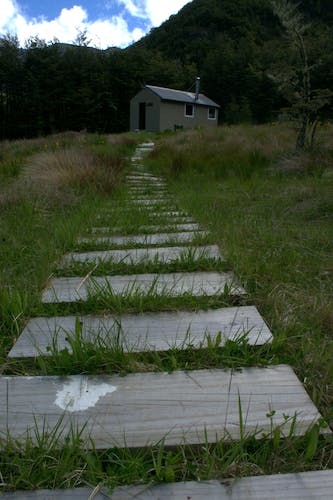 Early next morning I traverse the final scree slope to Severn Saddle, leaving the forested valley of the Leatham behind. Ahead is a vast, broad tussock-filled, mountainous valley. The bad weather has passed, replaced by blue sky.

The route from the hut has been marked with orange poles and is a cut track along the spur leading to Severn Saddle. Judging by the entries in the Top Leatham Hut book and by the condition of the track, it is prone to severe snowfall damage. Fortunately, I found it relatively clear of fallen trees but even so it remains a steep and difficult push to break out onto the tussock and snowgrass. It’s then a steep scree traverse to the saddle.

In bad weather, I suspect the markers would be difficult to follow and the snowgrass would be deadly. The descent into Severn Valley also follows a long scree traverse to the left. I follow in the steps of the Nelson trampers, still one day ahead, and stay high to avoid a waterfall and harder ground lower down. In no time at all I have dropped to the valley floor and follow easy stock trails over broad grassy planes to Severn Hut. I turn around frequently to take in the towering mountains around me in what I decide is the most picturesque part of the trip.

Severn Hut was built in 2006 to provide accommodation for those completing the Molesworth East-West route. It is sited among a bushy stand of red tussock and looks up the valley to the surrounding peaks. There is a small stream nearby for water but no fireplace, making it an inhospitable place in winter. It has had little use from trampers with the majority of hut book entries from Molesworth Station workers up to herd cattle or hunt.

I arrived in good time from Top Leatham so decide to push on, joining two days worth of travel. It’s hard work for the next two hours, to point 1764m directly above the hut. The route then descends rapidly into the unnamed stream, aka Boundary Stream, heading east towards Saxton Hut.

The view from the high point is spectacular with high peaks topped by an aqua blue sky contrasting starkly against the brown and barren landscape. Mt Tapuae-o-Uenuku and its neighbour Mt Alarm interrupt my view towards the coast.

The journey downstream is long, there are numerous feeder creeks from both sides and I grossly over estimate my speed and position as the afternoon merges into early evening. I relax, taking in the scenery and mix up the terrace travel by wading through a couple of small gorges to eventually reach Saxton Hut as the warmth of the day is receding.

That night I share the hut with the group from Nelson. We compare notes on the trip, all agreeing it is a fabulous circuit, sheltered from the storm, I feel I have unravelled a gem.

The sun makes its presence felt the following morning, as my new Nelson friends and I wander the short distance to the car park and a dusty drive home.