When I was a teenager, my bedroom walls were covered in pictures I’d cut out of magazines: mountains and seascapes, trampers on razor sharp ridge lines, climbers scaling impossible faces, hidden river gorges and rare wildlife. My friends’ rooms had photos of nice looking people and parties.

I grew up by the beach in Christchurch in an active and creative family. Some weekends we’d get up in the dark, and drive west to the snowy slopes of the Southern Alps or we’d load up the bikes and tackle the hills of Bottle Lake Forest Park. There weren’t many days when we didn’t visit the beach, even if it was just to peer over the dunes to get blustered by sand and sea spray.

Creative projects occupied our time when the weather forced us indoors. I used to draw a lot. Dad introduced me to watercolours when I was nine and I suppose this was the beginning of my painting obsession. I never really stopped after that.

I knew that my life would be consumed by the outdoors, adventure and painting but it has taken a while to discover how they would all meld together.

The latest journey, last year with my partner Tyrell, was a milestone, and resulted in a book and an exhibition.

We paddled, pedalled and walked from Te Waewae Bay on the south coast to Cape Farewell, the most northerly point of the South Island. It was a 2000km journey that started with a single idea and a dash of courage.

We wanted to demonstrate that the ability to tackle huge challenges, whether in the outdoors or in some other aspect of life, lies within each of us. The only limits are those you place upon yourself.

I also wanted to bring awareness of how special our country is. As New Zealanders the outdoors is one of our greatest treasures. It needs to be safeguarded so that our great, great grandchildren can enjoy it too.

It is so difficult to pick the best moments from the multitude of memories, some of extreme happiness or wonder, others low points of complete mental and physical exhaustion or overwhelming fear. 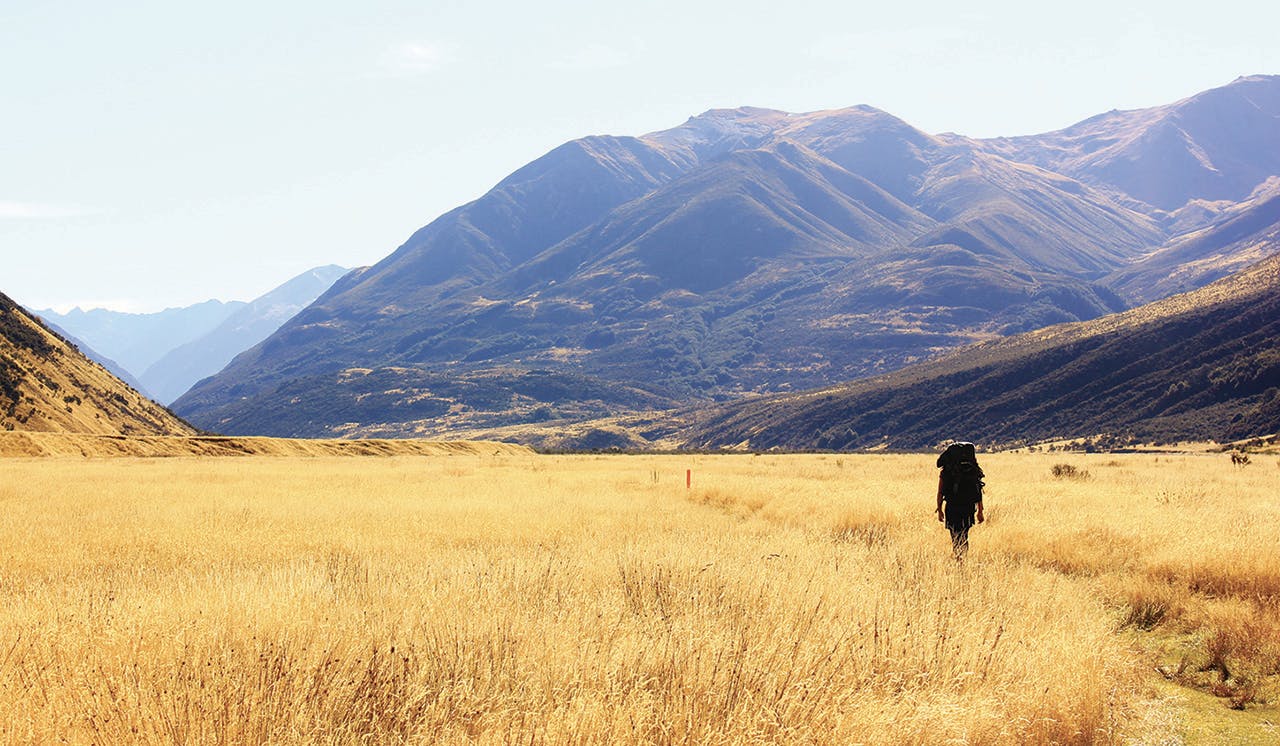 The timeless landscape of the Canterbury high country. Photo: Supplied

However, the beginning of our journey will always stand out for me. As we stood there contemplating where we were, the raging surf and what we intended to achieve, a local fisherman pulled up on his quad bike.

“What are you two doing?” he asked.

“Not around here. Where ya going?”

“We’re going to paddle from here around Fiordland to Jackson Bay.”

“You gotta be kidding. Bloody crazy fools. You’ll just get yourself into trouble or killed.”

“Well, hopefully you don’t hear about us again.”

“No doubt I’ll hear about you on the six o’clock news.”

With that he tore off down the beach; and we stood there hugging each other for moral support.

Three days later, after waiting for the surf to abate, we were beyond the waves and headed for the ferocious coastline that is Fiordland.

The Fiordland coast has an immense presence and a wild, unforgiving nature. It is swept by formidable storms and carved by torrents of water that shroud its mountains for most of the year. Amongst that remote grandeur is the fragility of life: forest floors quilted with finely-woven moss and beads of water tinkling downwards from leaf to leaf after the storm has cleared. Here the tiniest of birds chase sandflies in a show of aerial acrobatics.

Fiordland exposed many of its moods to us. Overall she was kind. One night she boasted the glassiest water I’ve ever seen with mirror perfect reflections. Less than 12 hours later we were pelted with stinging horizontal rain, with wind threatening to rip the paddles from our grip and clouds obscuring our destination. In contrast, Puysegur Point, the windiest place in New Zealand, allowed us to see its tamer side and we snorkelled in clear water, darting amongst the rocks and seaweed in search of paua.

We encountered a variety of wildlife. Albatross would swoop through the troughs of the swell only metres from our kayaks, gannets would plummet into the sea in search of dinner, and we would hear the elusive Fiordland crested penguin. Most days a blue cod would be pulled from the depths to become dinner and at one point we thought the tables may have turned. A great white shark surfaced behind Tyrell’s kayak and glided behind him, nose on the rudder for what seemed an eternity.

I’m glad I paddled the coast north of Milford and especially thankful that Tyrell was by my side. I turned a deaf ear to the warnings of surf and river bars and denied what I really did know.

Leaving Barn Bay, alongside Tyrell through two-storey high breaking barrels, was the most terrifying moment of my life. I felt sick to the stomach and in fear of my life.

At Jackson Bay we swapped our kayaks for touring bikes and pedalled north past the glaciers, Hokitika and on to Otira. We soon learnt that we were not natural cyclists. I forgot padded pants which was a bad start and it got worse, to the point where neither of us could sit down. It was a relief when we turned east for the mountains and their trails. I was by no means an expert tramper but we soon fell into a routine and relished the challenge of the steep climbs and long days.

There was something so satisfying about the simplicity of walking and watching the contour lines of the map come to life before us. The slower pace encouraged us to really see the country, to notice the minor details and become immersed in the experience.

As I trudged along and gazed up at the soaring peaks, shrouded by misty cloaks, and then across at densely-packed bush, it was easy to imagine it through the early explorer’s eye.

Now, in the 21st century, we followed them too. We walked along those same ridgelines and over those same passes. We stared in awe at towering peaks and at the torrents cascading down rocky gullies as all the others had done before. Even though our style of travel was luxurious compared to theirs, even though the way had been mapped, it was new to us. We hadn’t set eyes on the view beyond the pass and curiosity lured us on as if we were the first.

The myriad of lines on the maps were constant fuel to our curiosity. We spent many hours studying them, musing on what lay ahead. The contour lines and land features were shown in plain colours for us to visualise yet they held so many mysteries and secrets. It was as if a magic spell concealed the true character of the land and the only means of unlocking the code or breaking the spell was to set our eyes upon it.

The experience has reinforced my need to be in the outdoors for extended periods of time. Life is simplified and I’m able to take all the ideas, theories and experiences from my world to the ocean, the trail, the birds, the whales, the trees, the rivers and the waves and somehow, while I stare in wonder at our natural world, it all unscrambles.

Here I know and understand my place within it.