When 40 excited teens and twenty-somethings boarded a bus bound for Fiordland, they had no idea they were about to embark on a landmark trip that would change the face of tramping in New Zealand.

That’s no exaggeration, for without that rebellious bunch from Dunedin, it’s possible the Milford Track – the country’s most iconic walk – would not exist. And it’s also possible that many of today’s Great Walks would have become private – only open to those with the deepest of pockets.

Yet – be honest – who has actually heard of the freedom walk of 1965? I hadn’t. Yet it’s a vital part of the history of this world renowned track.

The heroes of the story were 40 members of Otago Tramping Club (as it was then known). They were all young – some only 16 – but this was the 1960s and youngsters were refusing to accept the stuffy laws of establishment for the sake of it.

At the start of the decade, the Milford Track was as highly regarded as it is today, but was a private track for the rich. It was managed by a government department called the Tourist Hotel Corporation (THC). The THC could give freedom trampers permission to walk the track. But rarely did, if ever.

The draconian reality of this was felt by students at Auckland University when, in 1962, after paddling on Lakes Te Anau and Manapouri, they decided to try walking the Milford.

They were soon stopped, told they couldn’t continue and were marched away. When they complained to the ombudsman they were told they were too small a group to take on the might of the THC.

But groups such as the Federated Mountain Clubs started to question the legality of refusing freedom walkers the right to walk on land situated inside a national park. The issue gathered momentum and reached a head in 1965 when the THC applied to the National Parks Authority to lease the track and the surrounding land – in effect, giving authority for the track to remain private.

That was when John Armstrong and other members of Otago Tramping Club said enough was enough. Though only 26, Armstrong was one of the senior members of the club and led the trip that made history. Determined to show people weren’t prepared to accept being told where they could and couldn’t walk, a bus load travelled to Te Anau.

“We didn’t ask permission,” says Armstrong. “We instead advised the authorities that we were going. We reasoned that the track was part of the national park and that they couldn’t stop us.

“Fiordland National Park responded that we were not allowed to go without THC permission. A THC manager in Dunedin at one point stood up, hit his desk with his fist and said ‘permission not granted, repeat NOT GRANTED!’ 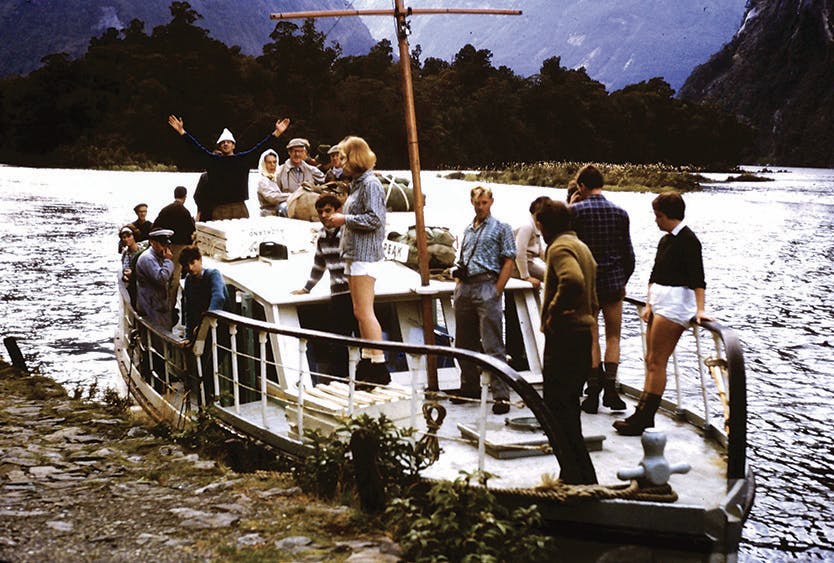 Success! The freedom walkers board the boat at Sandfly Point. Photo: Supplied

“On the morning we left, the National Park Authority granted us permission but by then we were going anyway.”

But the trip was hardly plain sailing. The plan was to drop 28 of the party at the southern end of the trail. Lack of funds ruled out hiring a boat to cross Lake Te Anau so the party climbed over Dore Pass before beginning the track proper.

The problems began at the hotel at Milford Sound. “When we reached the hotel (which was owned by the THC), they said we couldn’t have a boat,” recalls Armstrong.

“I then spoke to a fisherman who said he’d like to help with his boat, but feared he wouldn’t be allowed to fish out of Milford again if he did.

“When you’re young, things aren’t so well planned. If we couldn’t get a boat I don’t know what we would have done. I went back to the hotel and asked to speak to the Otago Daily Times using the hotel phone. They didn’t put us through to the newspaper, but half-an-hour later they said we could use a boat for 12 shillings and sixpence a head.”

The boat took them to Sandfly Point and they started walking, keeping an eye out for their fellow club members who would meet them at some stage on the track. But, as is often the case in this part of the world, the weather became atrocious and the rivers swelled.

Armstrong’s small group reached the river crossing at the Boatshed Hut, but needed to cross the Arthur River here and it was too high to wade. “We joined two climbing ropes together, strung them over the river and camped on the Milford side as the river was rising,” he said.

“It hosed down overnight and the water rose to 18 inches below where we camped. We didn’t have a plan B if the water reached the tents. The next morning we found a little raft in the bushes and attached it to rope using the carabiners.”

The rest of the party met them and, using the raft, they managed to get most of the group across the river that day. The rain stopped that night and the following day the water had dropped to a level where the remaining trampers could wade across.

To everyone’s relief, a boat was waiting for them at Sandfly Point and the mission to complete the whole track had been accomplished.

The Freedom Walk received national attention and the authorities had to act quickly. “Public opinion was definitely in our favour,” says Armstrong. “It wasn’t quite the ‘81 Springbok Tour reaction, but there were editorials in a number of papers and there was no question the public was entirely supportive.

“The National Parks Authority and the THC got together and came to the agreement within a few weeks that freedom walking be allowed and with new huts built on the track.

“It’s without question that the agreement was due to the walk – the Government wanted to be on the side of the public.” 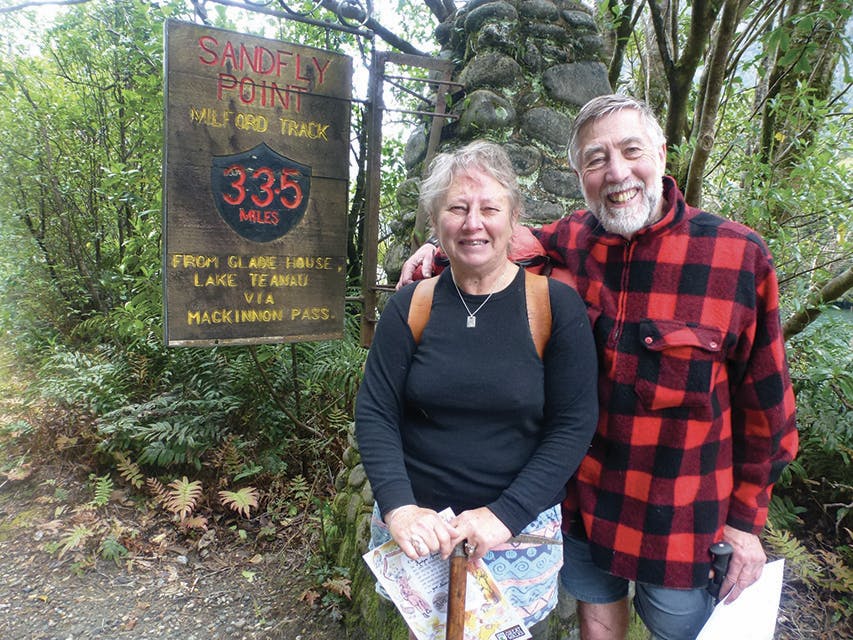 The full enormity of what the walk achieved only hit Armstrong on a recent heritage walk organised by Fiordland National Park celebrating 125 years of the Milford Track. With the luxury of hindsight, guides helped him put the achievements of the club into context.

“They made us realise that if the walk hadn’t taken place the Milford would probably have continued as a private track and this may have set the precedent for other walks, such as the Routeburn and the Tongariro,” says Armstrong. “But we also may have saved it as a guided walk as well. It was getting expensive to maintain the track and now freedom walkers pay their share of the upkeep. Maybe without this, the track would have closed entirely.”

Also on the heritage walk was Armstrong’s wife Robyn. She was also one of the pioneer freedom walkers, only she was in the group which walked the track from Dore Pass.

“At the time,” she says, “I didn’t appreciate the enormity of what we were doing. I was in my first year at university and this was an opportunity to walk the track for free. But it was also a chance to stand up to a government department that wanted complete control.

“We have a real sense of pride now and on the heritage walk we were treated like heroes.”

Robyn is keen to get in touch with as many of the party as possible to get their accounts of the event in time for the 50th anniversary of the Freedom Walk next year. “We were worried about repercussions at the time so no-one wrote up about it,” she says. “I’d like to write a book about it and each time we meet members from the tramp we get more memories.”

Ken Bradley is a senior ranger at Fiordland National Park and has been associated with the Milford Track on and off for 45 years. It was he who organised the recent heritage walk and treated the Armstrongs like royalty.

“The freedom walk was vitally important,” he says. “If not for that then it’s possible the track could have closed. Either that, or it would have been exclusive for a number of years.

“Before the walk, facilities were run down and the track was expensive to keep open – far beyond the resources of the THC.

“The freedom walkers opened the track up for a lot of people who would never have otherwise had the opportunity. But it’s really hard to say what would have happened if it hadn’t taken place. There could have been a public revolt that led to the opening of the track, or the authorities may have tried to create exclusivity on the track.”

What we do know is that after the freedom walk, members of the public could walk the track for a maintenance fee of $3, while private tramps were still available for those who wished to pay extra. In 1991-92, DOC became responsible for maintaining the whole track and introduced the modern system of freedom trampers paying to stay in the huts, rather than paying a track fee.

Fiordland National Park estimates that each year the attraction of the Milford Track generates $20 million for the local economy and $30 million nationally. “For many people the track is a highlight of their lives,” says Bradley.

All these people owe a degree of gratitude to the 1965 freedom walkers who helped to make it possible.